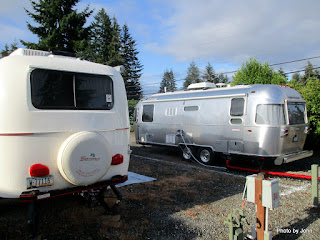 One of the lessons we've learned is to have a known spot to land for the major holidays when tourist destinations are cramped with people leveraging the long weekend. This trip, we stayed in the Olympia area to touch base with BJ's family. Last time we were here we stayed in a commercial park on the south side of town. This time we stayed on the northeast side of town because we wanted open skies and it was less expensive. 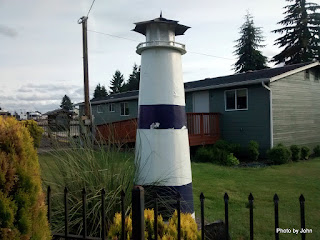 Washington Land Yacht Harbor is owned by the Airstream club, but the RV spaces are open to any brand. The facilities are basic and the spaces are lined out on a large gravel lot. They do have a long list of rules to sign, but they're really just 'good neighbor' sorts of things. 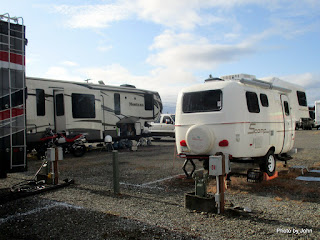 The spaces all have some slope, but none of them had mud puddles which was a fair trade-off. The rules list doesn't apply if you're a neighbor to a Scamp. Feel free to fire up your air compressor at 6 a.m. to adjust the tire pressure in your motorcycle that you're not going to ride until 9 a.m. anyway. The nice thing was that they were gone the next three days so it only happened once. 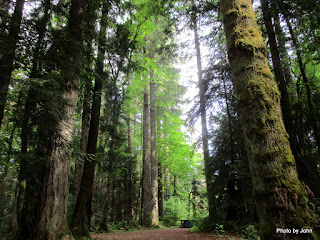 Unlike our last three or four trips to the Northwet, this trip has been a reminder of how the state stays green. We've had more rain than normal, but other than an excuse for a dirty truck, it hasn't impacted us too much, depending on who you ask.

We are loving the many rail-to-trail places that we've found. There were more miles of this sort of thing in Olympia. 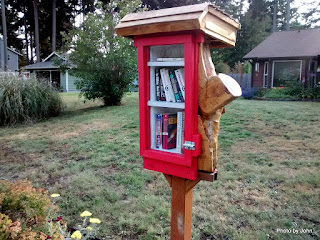 While wandering around the neighborhood, we ran across some more Little Free Libraries. This one had the book shelves carved out of a tree trunk. 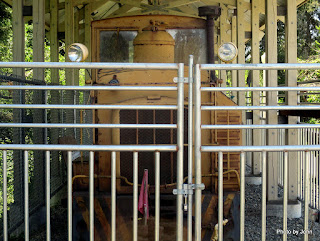 I thought I had a pretty good handle on Washington communities but we found one I'd never heard of before. It was the little, former company town of Dupont. Yes, that DuPont. They had a small museum and fenced in behind the museum was a very small train. 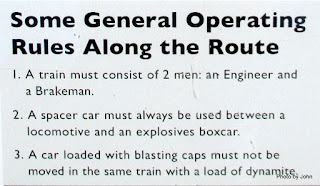 Turns out DuPont manufactured dynamite at Dupont, and used the narrow gauge train to transport product from the factory facilities to a dock on the bay. At least they had a better safety record than the outfit in Mesa (which will remain nameless) that built inflators for air bags. 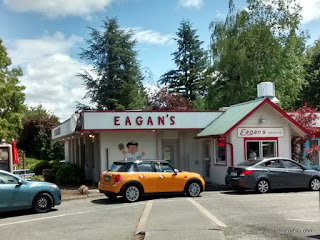 One of the important stops when visiting BJ's turf is a stop at Eagan's. They really do make very good hamburgers. Maybe not as good as when we were dating, but ... 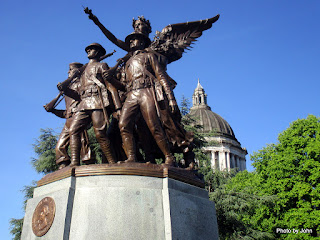 As luck would have it, I was wandering the Capital grounds on Memorial Day morning. The largest, and most obvious statue recognizes those lost in World War I, 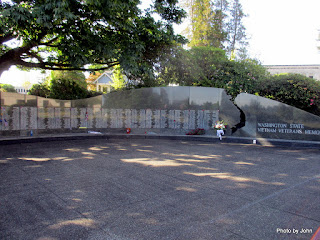 but the most moving for me was a beautiful wall listing all the Washingtonians lost in the Viet Nam conflict, including some I knew. This year especially, Memorial Day was more than just a holiday.