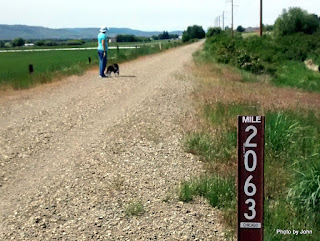 Back at the farm, the Iron Horse trail marker said it was 2063 miles from Chicago. 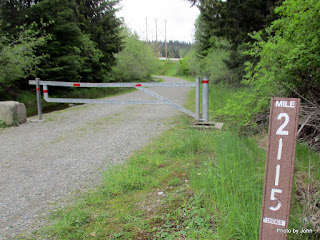 Here at Hyak, on the east side of Snoqualmie Pass, it was 2,115 miles from Chicago, and just 52 miles from the farm. 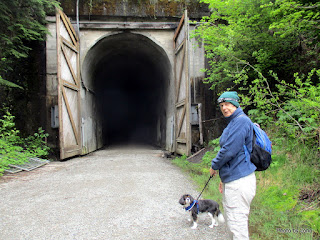 One of the really cool places along the Iron Horse trail is the Snoqualmie Tunnel. Depending on which source you read, the tunnel is either 2.3 miles or 2.4 miles long. The nice thing about rail trails is that the slope is minimal so we only needed to deal with the dark and the cool temps. The tunnel is typically only open between May 1 and October, depending on snowfall. 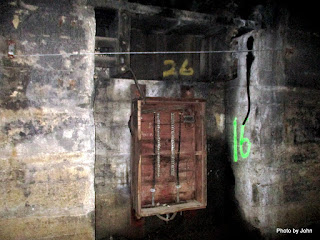 The Milwaukee Road originally operated steam engines over a much steeper route through the Cascades, but with the completion of the Snoqualmie Tunnel, they electrified their whole system from Tacoma all the way to Othello, Washington. Even today, as you walk through the tunnel, there are 41 alcoves with remains of electrical equipment that provided power to the trains. Someone labeled each alcove, counting from each end of the tunnel. 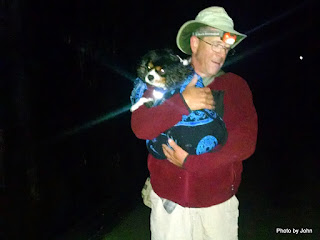 Knowing how much Turk dislikes the dark - one of the results of his attack in Alaska three years ago - we decided to give this a try. I ended up carrying him about half way west-bound, and about 1/4 of the way east-bound. Better than we expected! 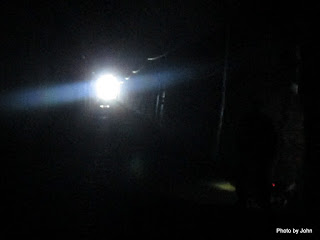 One of the amazing things about the nearly level tunnel is that you can see the far end when you first enter the tunnel. I kept trying to get a good picture of the light at the end of the tunnel, but my small camera wouldn't cooperate. The small white light over my left shoulder in the previous picture is the end of the tunnel. 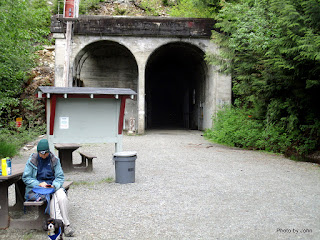 The west end of the tunnel features a double portal. Although the tunnel designer intended for the route to be double-tracked, it never was. The only physical manifestation of that plan is the very short second portal on the west end. 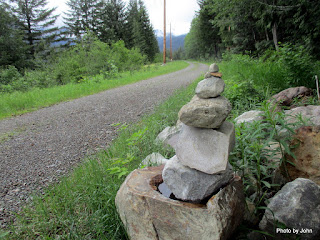 It's impossible to get lost given the high quality, wide trail that has been constructed on the old roadbed, but apparently someone thought an additional cairn would be helpful. 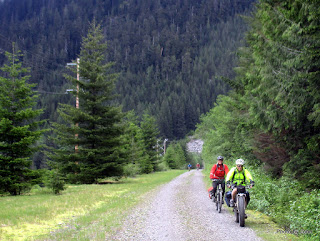 We had the tunnel to ourselves both directions. There was a single bicyclist who had just emerged from the east portal before we entered (headed to Bend, Oregon), and a group of 10 or 12 that were on the last day of a multi-day trip, headed to North Bend for their finish, that passed us while we were eating lunch at the west end. They'd had a couple vehicles hop-scotching with them so that they didn't need to haul their camping gear. 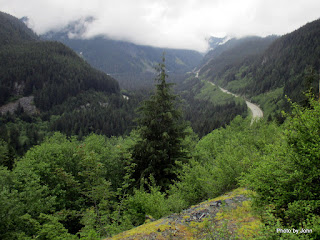 A view of east-bound Interstate 90 from near the western portal of the tunnel. 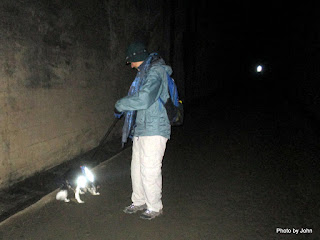 While it's amazing to me that the tunnel and route are no longer used for rail traffic, since the route is both lower and MUCH shorter than the route that BNSF uses from Chicago, the chance to walk through the mountain was really special.

And yes, we did sign the logs of a few caches along the way! Once again, caching took us to a place we might not have visited otherwise.
Posted by Just Finding Our Way at 2:30 PM