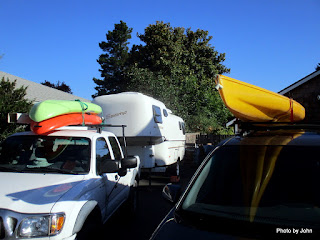 One of the things I've wanted to do for years is to paddle on the Willamette River in Oregon. We brought the boats this year with the idead of paddling around Ash Island near Dundee, but it was too cold for the Arizona weather wimps when we were through here in late April so we came back to try again as we started our homeward trek. 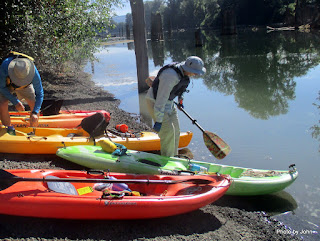 Our paddling buddy, Ian, and his daughter-in-law, joined us for the paddle. BJ and I were double-tasking - wanting to do the paddle and hopefully locating some geocaches on Ash Island. 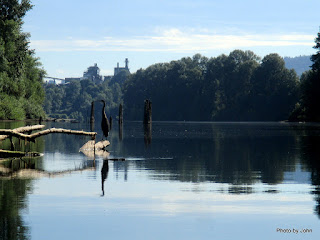 The river pools up along this section, resulting in minimal current, especially on the inside of Ash Island. The heron looked black but was big enough to be a Great Blue Heron - it's a bird of some sort. This area had lots of different birds, but no knowledgeable birder on this day trip. 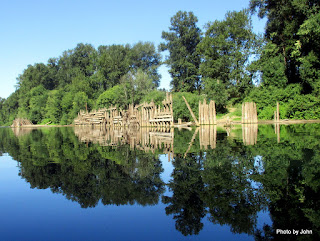 The pilings from the old docks that had lined the area at one point made for interesting reflections, and marked our launch point. We paddled from the launch to the northeast end of the island and then started circling the island counter-clockwise from that point. 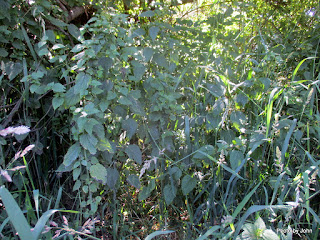 Some northwest geocaches are very well protected! The nettles were well over six feet high in places. 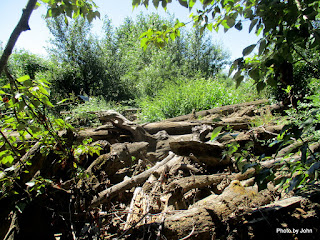 If that wasn't enough, you could also choose to try to pick a trail through the old logjams that had grounded on the island. 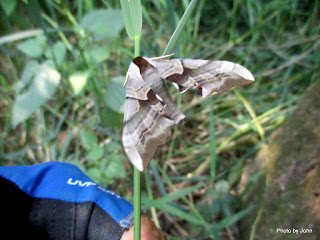 We spotted a beautiful camouflaged moth near one of the caches. By the time we'd done four caches we realized that it was going to take much more time than initially anticipated, 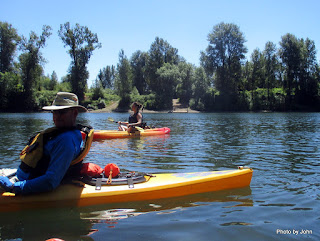 so we elected to enjoy the rest of the paddle without the interruption of trying to locate caches as well. On the far shore is a ferry landing that they use occasionally to bring farm equipment to the island. Once the river level decreases from the spring high water, the center portion of the island is farmed, although you'd never now it from the edges except where the irrigation pump is set up and the ferry landing is located. 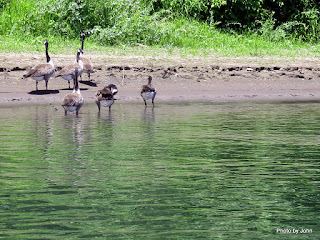 We were mooned by the young ones in a gaggle of geese. By the end of the trip, we were passed by a handful of power boats headed up river. 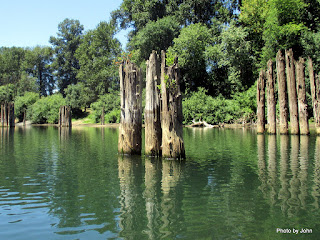 On the inside of the island, we pretty much had the river to ourselves, but it won't be long and the seasonal kayak & canoe rental will be in operation at the launch site, insuring the area will be busier. 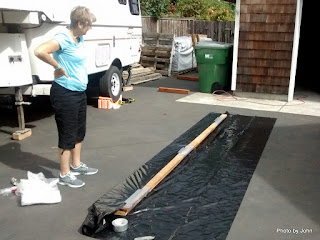 When we got back to our moochdocking location, BJ helped me wrap up Kathy's canoe - at least we expect the lumber to turn into strips for a solo canoe next winter. 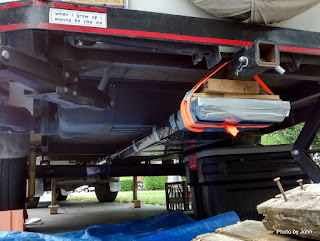 The bundle was suspended under the trailer where it rides securely for the trip from the northwest back to Arizona. Thanks to the trailer's torsional axle and the lift that we put under it a couple years ago, we have almost 3" of clearance to haul some choice boat lumber.
Posted by Just Finding Our Way at 2:30 PM