Center of the Known Universe 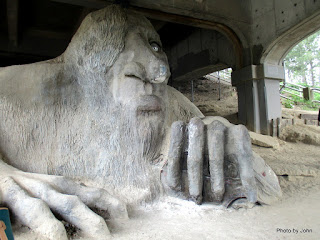 One of the reasons for staying in Fall City was to do a day trip to the Fremont area of Seattle. According to reliable sources, in 1991, Fremont scientists, doing extensive research, came to the conclusion that the intersection of N Fremont Ave. and 35th Street N. was the Center of the Universe. They supported this statement with the claim that it could not be disproven. Of course, it can't be proven, either, but that's beside the point. Fremont is a quirky area nestled below the Aurora Bridge on the north side of the Ship Canal. 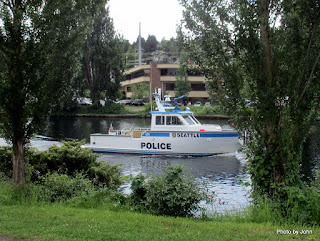 The Ship Canal runs from Lake Washington, through Lake Union, via the Hiram M. Chittenden locks, to the Puget Sound at Shilshole Bay. The locks are a favorite place of my but apparently have never been featured in this blog. The Burke-Gilman trail follows along the north shore of the Canal, past Gas Works Park and the University of Washington to the north end of Lake Washington where it connects with other trails continuing all the way to Issaquah, and via yet other trails, all the way to the Columbia river. 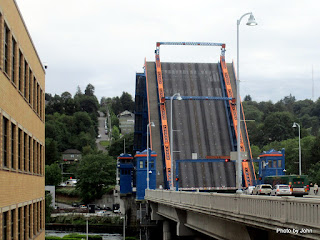 One of the things that separates Fremont from the rest of the world is the colorful Fremont Bridge. The bridge opens quite often for traffic on the Ship Canal. 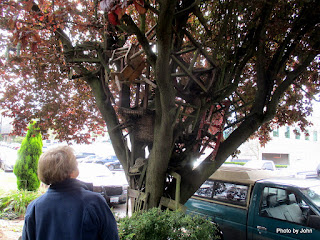 The troll isn't the only quirky thing in town. There's also the Chairy Tree. Apparently it's actually a flowering plum tree, but it's quite obvious where it got its name. 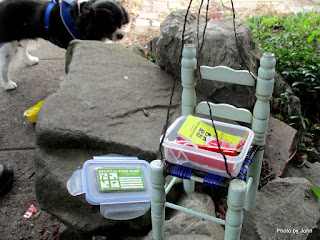 It's just one of the places featured on the geocaching.com's Headquarters GeoTrail. Turk didn't ever see the cache at this spot. 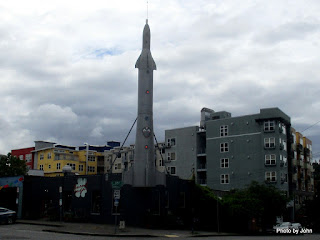 What would the Center of the Known Universe be without their own rocket? It's a "hand-me down" with a couple previous lives. 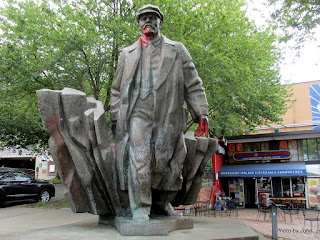 This massive bronze statue of Lenin certainly matches Fremont's motto, "De Libertas Quirkas," meaning the freedom to be peculiar. Apparently it was purchased in Europe after the revolution with the idea it would be featured at a Slovakian restaurant, but the owner died before the dream was realized. The statue has been for sale for years, but is on display in Fremont while waiting for an acceptable offer. 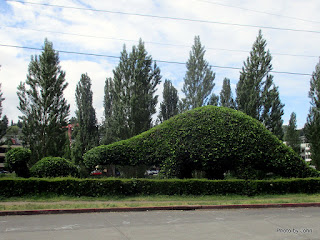 Near the Ship Canal (and some free, 2 hour, on-street parking if you're early enough) is the ivy covered dinosaur family. This topiary was originally displayed at the Pacific Science Center, and moved here about 12 years ago. 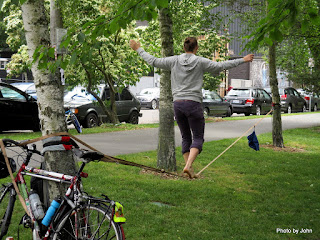 You never know what you'll see in Fremont. We were walking down the trail along the Ship Canal when this fellow stepped up to practise his balance. He hauls his slack line gear in a bag on his bike and picks picturesque spots to practise his art. 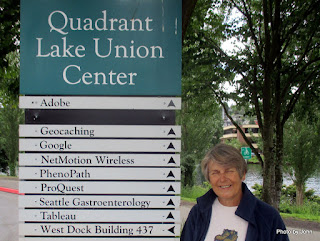 Fremont hosts offices for a number of well-known companies, and serves as headquarters for some of them. The rush hour traffic experienced after our Fremont visit was a high price to be paid, but the chance to wander Fremont was well worth the price.

BTW, I would NOT consider taking an RV to Fremont. Parking is a challenge with most lots charging $7 for 2 hours or $10 for the day. None of the lots I saw would have been viable for anything larger than a 19' Roadtrek.