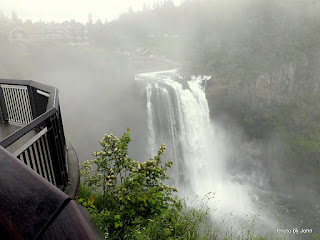 When you say, "Snoqualmie," to Washingtonians, most will complete the phrase with "Pass" while a few will suggest, "Falls." Those in the know will just respond, "What about it?"

We did stop at the falls, but between the grey skies and the mist, I couldn't get a clear picture of the whole thing. 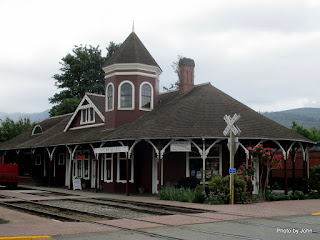 Unlike a lot of towns, Snoqualmie has managed to save their 1890 railroad depot which is now a museum. The museum offers train rides on summer weekends including a special Thomas the Tank Engine day for kids. 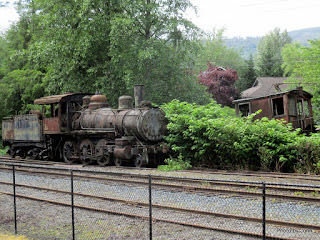 Some of their collection is parked on a siding just north of town. 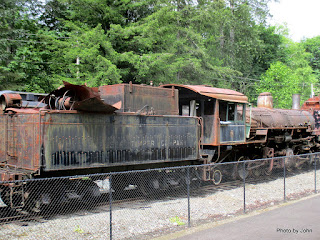 They have two 2-6-6-2 Mallet class locomotives in their collection. These locomotives were articulated so that they could handle the tight turns common on logging railroads. This one is the Weyerhaeuser Timber Company #6 that last operated in the early 1970s. The other, United States Plywood #11, is painted up nice and is on display by the depot. 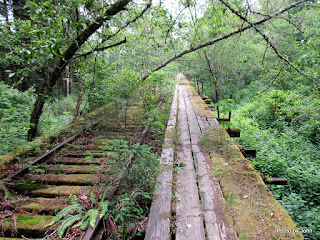 Just north of town is an old trestle that is now the home to moss and trees growing both through it and from it. 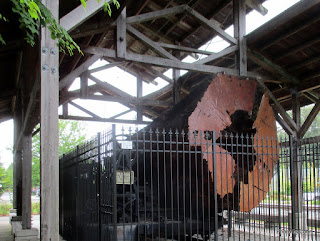 Near the depot is this display of a large old Western Red Cedar log, resting on a sawmill carriage. Typical of Western Red Cedar trees, the butt end is hollowed from rot. Timber was a major employer in the area and was the reason for development of the railroads in the immediate area. 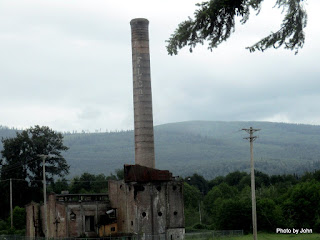 Within a mile of town is a large millpond and the handful of remaining buildings from what was once a major Weyerhaeuser mill. The powerplant and smokestack are now listed on the historic register. There are small trees trying to gain a foothold on the top of the stack, but I couldn't get them with the little camera. 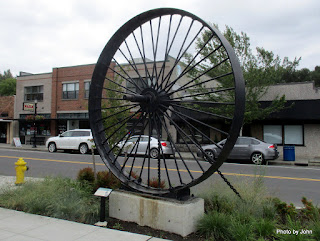 On display in downtown Snoqualmie was this 11' wheel which was one of the two wheels forming the bandsaw that was the heart of the sawmill. The blade for this saw was 65 feet long! 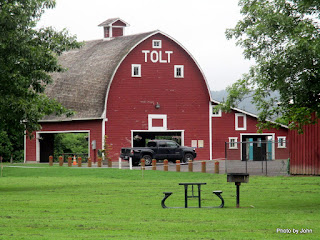 The other major industry in the area had been dairy. North of Snoqualmie is the town of Tolt which also was known as Carnation. Now this modified barn is used for picnic shelter at the County Park. If we come back to this area, the Tolt River Park would be our choice of places to stay. Much nicer than the Encore park we stayed at this time. 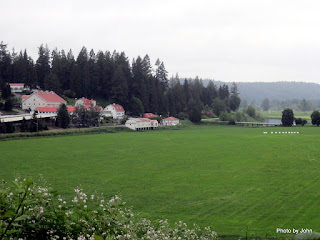 I went looking for Carnation Farm. For nearly a century, this was the breeding farm for the Carnation Milk Company. I was surprised to come over the hill to see some bales of plastic wrapped hay, but not a cow in sight in the expansive fields. 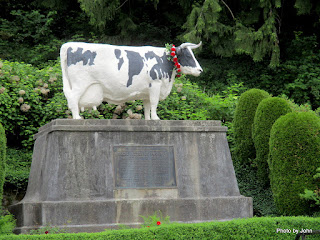 The only cow we found was the statue of Segis Pietertje Prospect. This cow, in 1920, produced over 37,000 pounds of milk at a time when most cows produced about 4,000 pounds annually. Carnation was bought out by Nestle which eventually shut down the farm. Now the buildings are home to Camp Korey, a camp for kids dealing with life threatening illnesses. The hay crops help fund the camp operation. 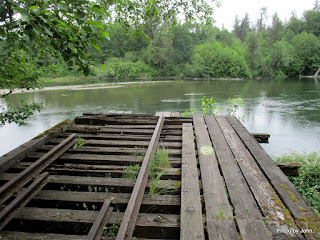 It's the end of the line for the historic legs of the local economy - timber, railroads, and farming. Now the towns are home to high tech employees working in Redmond, Kirkland, and Seattle.
Posted by Just Finding Our Way at 2:30 PM