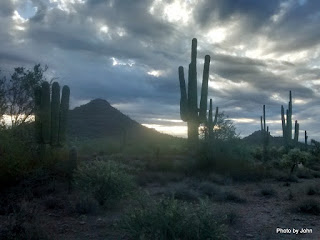 I've been watching a series of geocaches in Usery Mountain Regional Park since Spencer introduced me to the Geocaching quest last April. Finally, when BJ got home from her Green River trips, the weather had cooled off enough to make it worth giving the 4 mile long, 27 cache UMRP series a shot. We started early with a heavy overcast and a chance of rain. 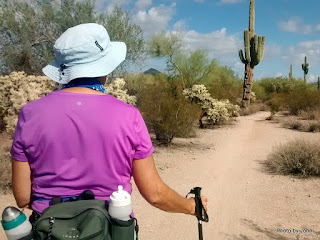 The trails in the main part of the park are very nice - wide and smooth. They're multi-use, shared with equestrian, bike, and foot traffic, although with our early start we only saw a couple bikes and a couple other hikers as we approached the end of our figure 8 loop. I wondered a couple times if we were going to be able to find everything in the series, 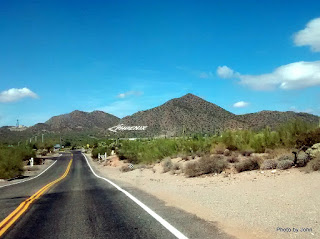 but we ended up finding all 27 in the UMRP series as well as three others that weren't too far out of our way.

Even if you're a newcomer to the park, it's pretty hard to get lost. Pilot trainees from local airports during WWII built the Phoenix directional sign, and it's visible from pretty much everywhere in the park.

There's still 12 other traditional caches in the park that I haven't found, so we'll be back!