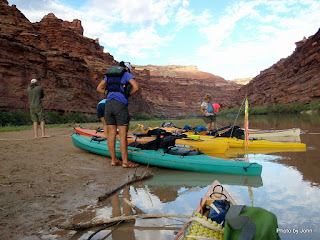 September 29. 2015 - With nothing to keep us on the sandbar island, we loaded up and said goodbye. While the island has a reputation for a layer (sometimes a very deep layer) of mud, on this visit even this section of the shore was firm. The weather forecast suggested the potential for afternoon winds so a 9 a.m. start was our target. 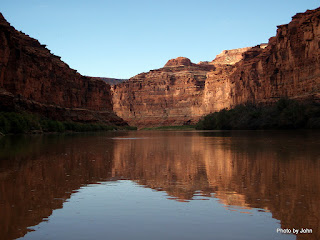 The canyon narrows, the closer you get to the confluence. With walls on both sides and glassy water, we had reflections everywhere we looked. 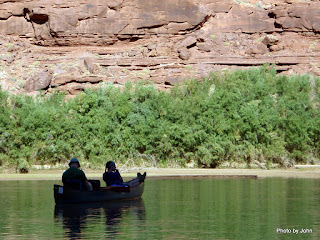 A couple in a canoe had passed us late in the afternoon a couple days ago. We caught them this morning and were so impressed with their accomplished skill at letting the river carry them. I tend to get in a rhythm and want to keep paddling, but their pace was certainly appropriate for the day. They passed us again while we were setting up camp. 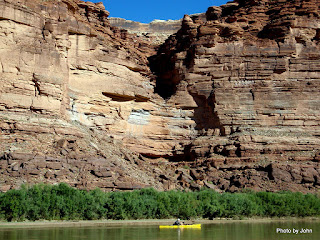 We've seen these dry falls flowing during a storm. While beautiful when running, I'd lots rather see them like this. By this time in the trip, we were all expressing amazement about the blue skies, unusually warm temperatures, and nearly dead calm conditions that we'd experienced for the past week. 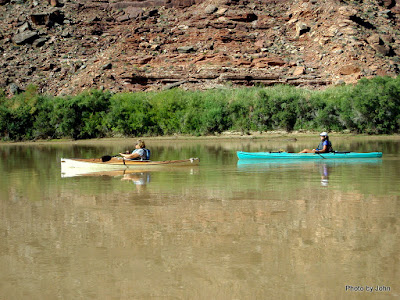 Reflections - what can I say? 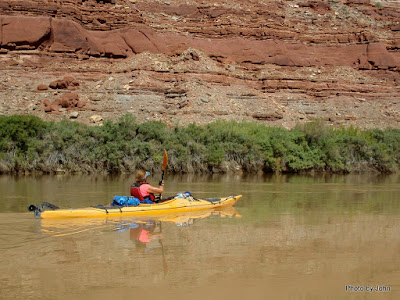 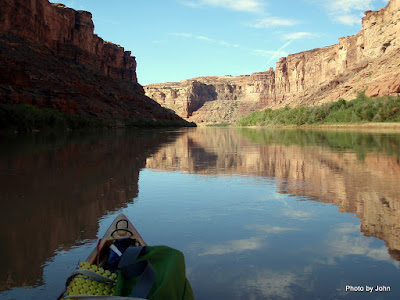 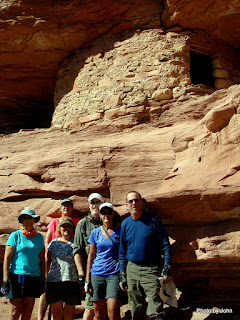 We stopped at Jasper Canyon and walked up to take a group photo at the dwelling. This year the trees had grown enough that we couldn't see it from the river. This was one of only two pictures from the trip that had all of us in it. 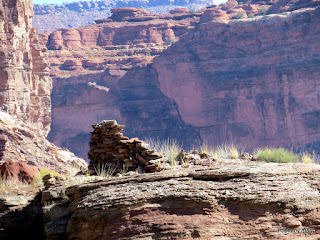 Alan managed to get a picture of the remains of the structure on the upstream side of the wash. Sometimes it is really nice to have that long zoom! 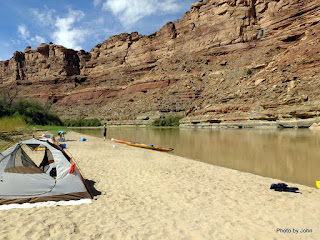 Like all sandbars, they change from year to year. We stayed here last year on the upper shelf which now has a crop of tammies about 3 foot high. This sandbar was really nice - everyone was able to pitch their tent directly in front of their boat, minimizing the carry. 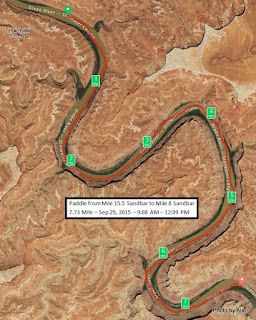 As usual, the area around the mouth of Horse Canyon was buggy when we went by. It seems that bugs are standard equipment for that section of river. Nearly eight miles plus at stop at Jasper in 3 hours. We obviously get failing grades for going slow even though we tried. 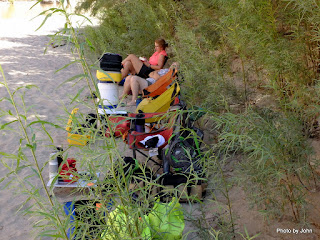 As had been the case throughout the trip, the shade was very popular. It was the primary reason for selecting this camp. All the chairs and lunch snacks ended up in a row in the shade. 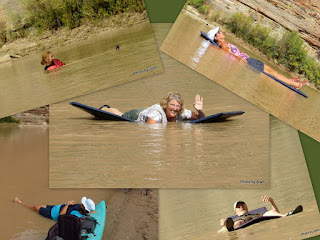 After lunch, Alan elected to test his Therm-a-rest. It looked like a good idea to most everyone, then it was floating in PFDs, and then floating without PFDs, and then just napping along the shore. Not bad for a "do nothing" day in paradise!
Posted by Just Finding Our Way at 2:30 PM