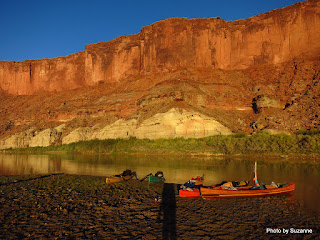 September 24, 2015 - The morning light on the bluffs west of our sandbar camp made the camp look better than it really was. Suzanne has an eye for the good light and/or reflection pictures. 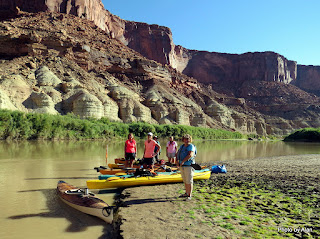 Alan took the time to take a picture of the rest of us before we departed our first camp. 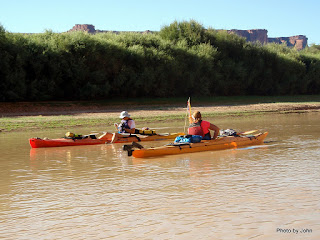 Apparently, it wasn't clear which direction we were going to go. It looks like BJ wanted to go back up stream. 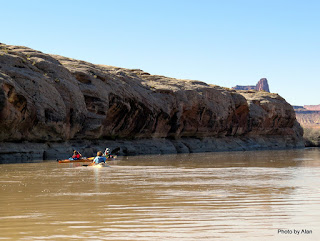 After completing the circumnavigation of Fort Bottom, and paddling the length of Potato Bottom, we reached the last point where the White Rim layer was at river level. There is a 4 wheel drive & bicycle road that follows the White Rim around Canyonlands National Park. We did see at least one jeep, a couple motorcycles and a couple bicycles during our first couple days on the river. 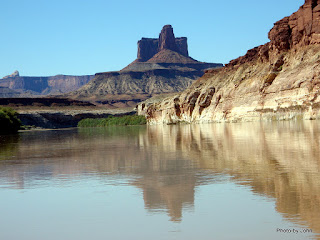 Last year, my blog readers selected a picture of Buttes of the Cross to reface the refrigerator door in the Scamp. With nearly dead calm conditions, the reflection of the buttes were just as nice this year. Initially assumed by John Wesley Powell to be a singular butte, it was later noted that it's actually two separate buttes. 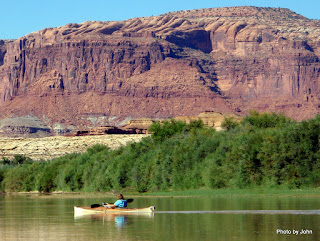 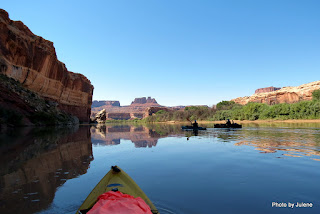 Reflections were everywhere we looked. 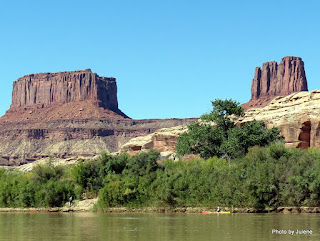 We had hoped that Anderson Bottom would be available, and we hit the jackpot. The takeout is a steep dirt bank visible at the lower left corner of this picture. I'm standing there as BJ approaches. Because of the steep bank, we had the boats approach and tie up one at a time.

The two buttes that form the Buttes of the Cross are in the background. 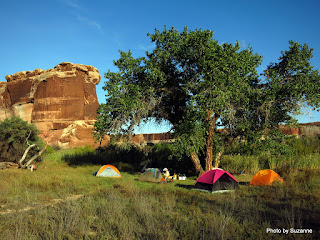 We haven't camped at Anderson Bottom for several years. It's not as nice as it used to be, with the field covered with thistles, but the area under the tree is still nice and worked well for a group of our size. 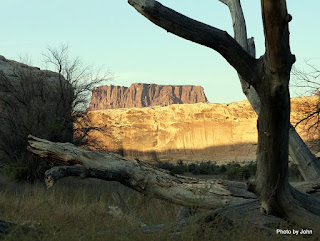 The old dead tree is still there, framing a butte about 8 miles east of camp. The tree has been host to a snake and a turtle formed of roofing nails, but they're starting to disappear. They were there when I first camped here 15 years ago, but now half of the snake and parts of the turtle have been removed. 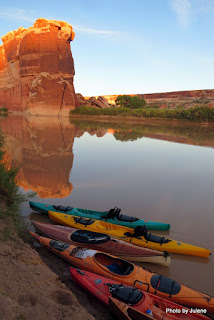 The reflections as the sun went down were beautiful. Suzanne got a picture looking downstream towards Bonita Bend that was just as stunning. Our weather was the best we'd ever experienced - nearly no wind, blue skies, with temperatures unseasonably (too) warm.

We had a wonderful time watching the stars after dinner, joined by our first of many visits from a Western Screech Owl that was dubbed Ascot. Ascot would respond to Alan's recording, land in the tree above us, and then carry on a conversation with Kathy. It was fun to watch.