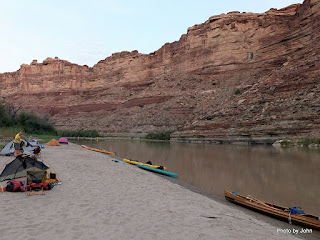 September 30, 2015 - We got up earlier than we needed since we could hear the group that stopped on the low, wet sandbar on the outside of the corner just upstream from our camp. If we're going to hear them up, we might as well get up too. Their camp was confirmation to me of my preference for launching early and making camp early. 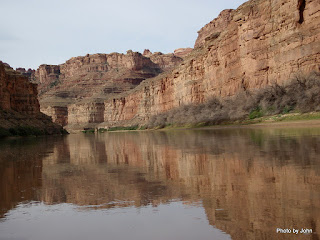 We had just a touch of breeze, adding a bit of texture to the reflections. 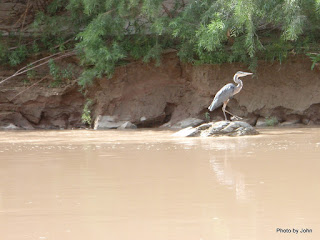 Usually, the Great Blue Heron are fairly skittish, but this one hung around letting me get several pictures before it took off. 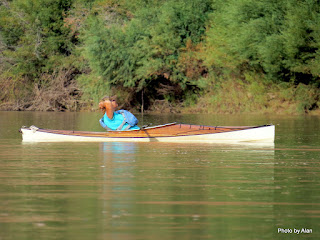 Kathy continued working on her "hard day at the office" pose. 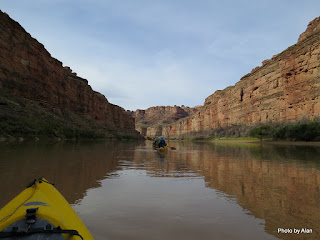 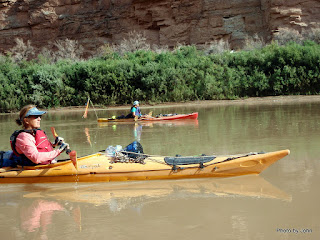 Below Water & Shot Canyons, the sun angle was just right to get Suzanne and BJ both right side up and upside down. 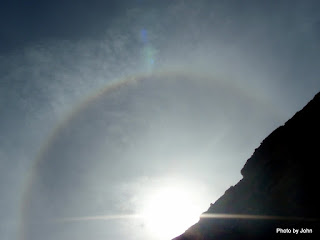 I was amazed to see a sun dog just before we reached the confluence of the Green River with the Colorado River. I'd heard about these rings around the sun, but I'd never seen one. They're apparently caused by ice crystals in the atmosphere. While this day was the coolest we'd had, it was still pushing 80. 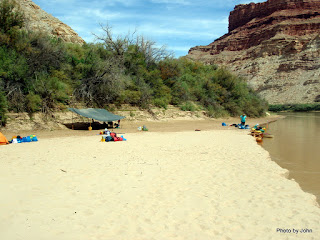 The huge sandbar that used to be pretty consist at the confluence on right right wasn't there but there was one on river left at the confluence. We weren't impressed so we continued down the Colorado about 1/2 mile to this large sandbar on river right. We landed near the upstream end where the bank was lower. 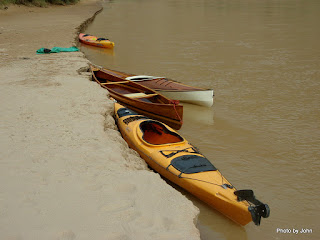 We got the boats emptied out and cleaned up, but left them in the water since we were using the large tarp for a shade structure. 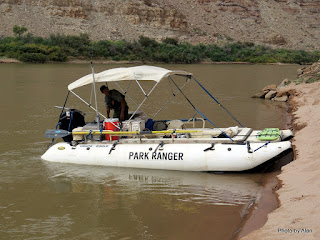 We hadn't seen a ranger when we launched on the trip, and never saw one on the Green. This guy showed up sporting a big wake which dumped chunks of the sand bank in our clean boats. All he wanted to see was that I'd signed the permit as trip leader. All I wanted was for him to wash our boats - again. 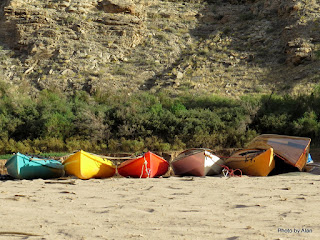 Once the sun moved around enough that we could take down the tarp, we laid the tarp out, washed the boats a final time, and lifted them up onto the tarp to dry. All nice and clean for tomorrow's jet boat pickup - or so we thought. 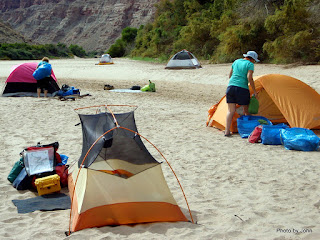 With lots of space to chose from, we ended up with tents scattered down the beach. Everyone was set up and staked down, when a windstorm blew up. Over a week on the river with hardly a breath of wind. Now we have sand blowing everywhere, especially on the clean, still damp, boats. 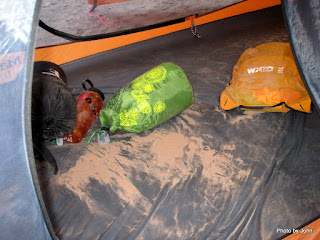 BJ was smart enough to get a picture of her tent before she swept it out.  Thirty minutes after it started, the wind quit. We could have washed the boats again, but decided twice was enough. 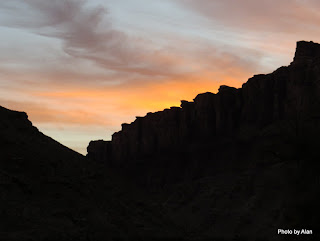 Because of the canyon alignment, we typically don't see much sunset, but Alan did catch some color on the high clouds for our last evening on the river. 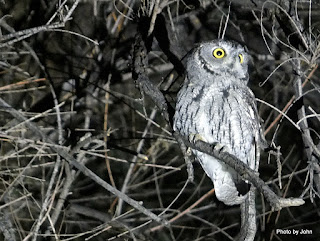 After dinner, we were kidding Kathy about Ascot leaving her. Just for grins, she called and quickly got an answer. A few more calls and Ascot (or his cousin) was spotted in the tree above us. That made four night that we'd been serenaded by one or more Western Screech Owls on this trip.
Posted by Just Finding Our Way at 2:30 PM