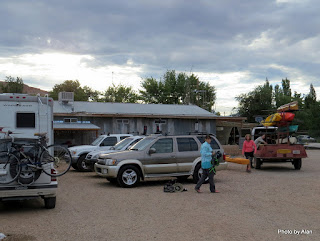 September 23, 2015 - We gathered at Tex's Riverways on our first morning under threatening skies. This is the second time that our group has loaded out in the back instead of the front. It's really nice since there aren't other groups competing for loading space - they're in the front! 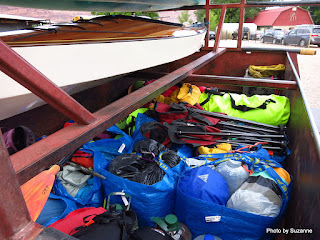 The IKEA bags make for quick loading of the gear in the trailer. This is the last time the boats will look clean!

It sure is nice to have first-timers on the trip. They see things that have become old hat to the rest of us. 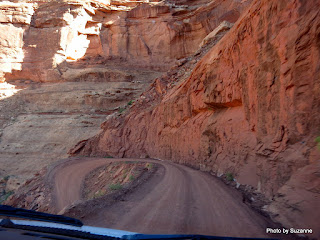 It's 38 miles from Tex's location in Moab to the put-in at Mineral Bottom and takes about 1.5 hours for the road shuttle. The road down to Mineral Bottom is in much nicer shape since it was rebuilt a few years ago. 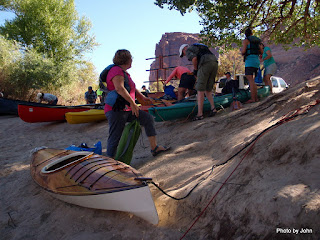 The launch area at Mineral Bottom is as steep as ever. The skies were clearing and the ground was dry which definitely reduced the slip & slide potential. 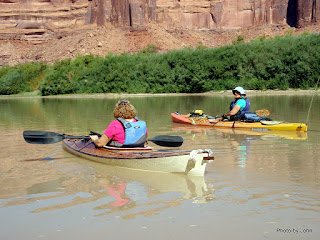 We were all loaded and on the water about 11 a.m. Kathy was enjoying her hybrid wood boat and her sixth trip on the lower Green River. BJ was returning for her 11th Green River trip. Her Scupper Pro kayak has the trip memorized. 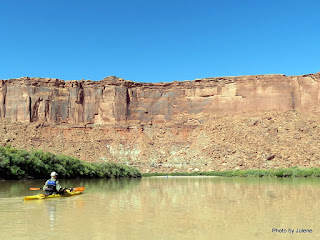 Alan was returning for his second trip. He joined us on last year's stormy 92 mile trip from Ruby Ranch to the Confluence. He paddled the same Scupper Pro that he used last year. 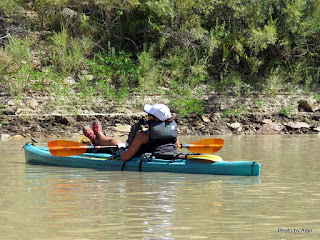 Alan's wife Julene joined us this year for her first Green River trip, also paddling a Scupper Pro. We were only a couple hours downstream when it became clear that she clearly understood how to properly enjoy the trip. 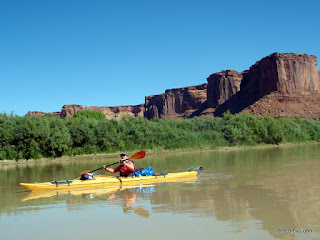 Suzanne joined us for a short trip below Hoover Dam last spring, and was game to give this longer trip a try. She rented a Prion TourYak from Tex.

Unlike other years, we scheduled a very slow nine days / eight nights to cover the 52 miles, allowing lots of time to watch the river flow by. 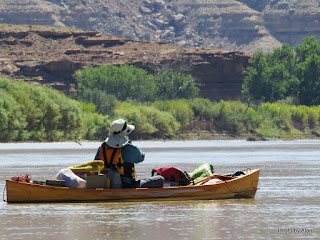 For much of the trip, I served as the Pied Piper in my wood strip Soul-Mate solo canoe. I built it specifically to haul the groover on river trips. 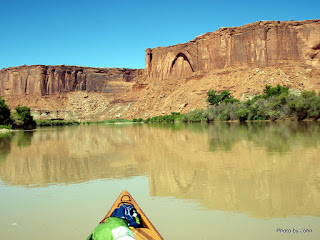 In spite of the forecast, we launched to blue skies and dead calm. It wasn't long and we could see the arch that has been our usual lunch spot for years. 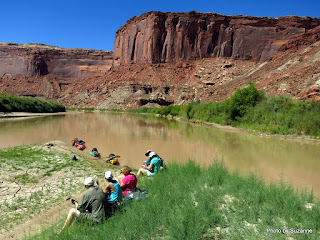 With the river flowing about 2300 cfs, the channel around the right side of the island at the lower end of Woodruff Bottom was flowing nicely. We came down river left and then across to the toe of the island, but the right channel might have been passable. 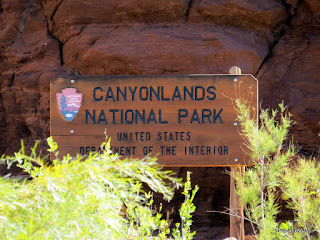 With lunch out of the way, we continued around the corner to the border of the Canyonlands National Park at River Mile (RM) 46.8. The rest of our trip, and much of the return trip up the Colorado River, will be within the Park boundaries. 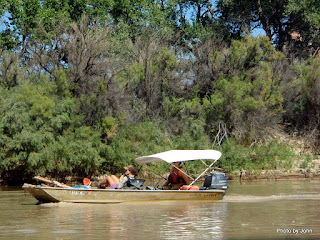 This was the first time we've seen motors on this section of the Green that weren't on Park Ranger boats. Two of these aluminum boats played hopscotch with us down the river. Turns out, the team of four people were doing fisheries research, counting the native Colorado Pikeminnow and the competing invasive species. Most of the fish in the net were NOT the desired Pikeminnow. 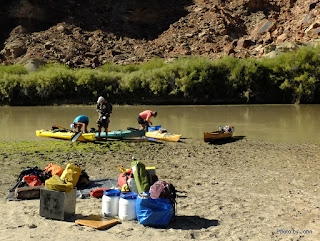 We'd hoped to spot on the sandbar at RM 41.2 so that we could hike to the "Fort" at Fort Bottom but a group of two had already set up camp in the middle of the usable space so we continued on around the corner to a mud-edged sandbar on the northwest corner of Fort Bottom. 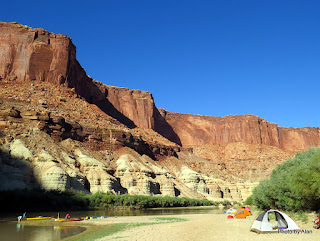 The sandbars were much healthier this year than we've seen for quite some time. This location was actually one of the poorer ones, but was the best I've seen it since I stayed here on my first Green River trip in September 2000. 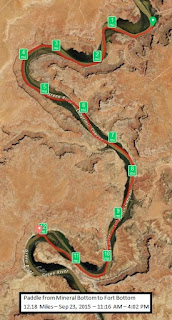 Thanks to Alan and the RunKeeper app he uses to create a map and track the distances for the day. 12.18 actual miles thanks to multiple crossings of the river to stay in the channel.
Posted by Just Finding Our Way at 2:30 PM