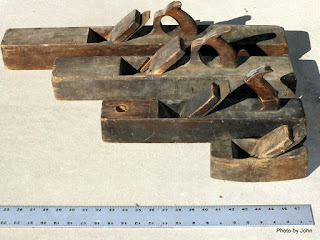 For over 30 years I've hauled a box of tools around. Rumor has it that Grandpa bought them at an auction. I finally decided to sort out what's there.

There were four wooden planes of various sizes, none of which were worth rebuilding but I might find some use for the beech bodies someday. 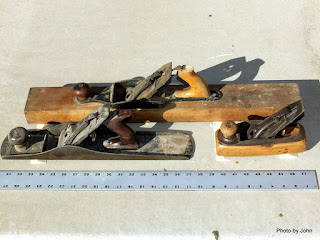 There were two transitional planes with beech wood bodies and metal frogs and adjustment system. The large one is no-name junk but the small one is a Stanley 24 that's seen very little use. I think I'll sharpen it and put it to work. The metal Stanley Bed Rock 606 fore plane is bigger than I would typically use, but could be lubed and sharpened. 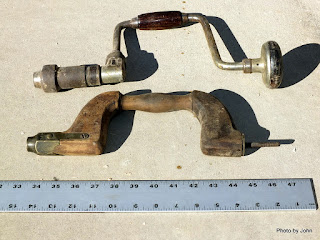 There were two braces and a canvas roll of auger bits. The upper one has the chrome peeling. The lower one is interesting - one piece of wood with a brass nose. Unfortunately, it's missing the top knob.

My favorite stuff from the box was this collection of monkey wrenches and a couple small wood handled pipe wrenches. They're of absolutely no use, but they may find a second life in a series of geocaches I'm dreaming about to be called the Monkey Wrench Gang in recognition of Edward Abbey's book of the same name. 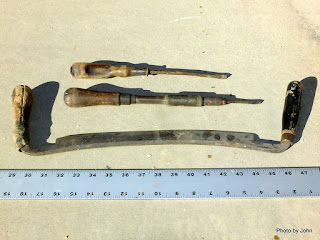 There was a draw knife that I'm saving in case I build a log cabin, a rusty Yankee screwdriver, and a straight screwdriver with a bent shaft and an interesting handle. 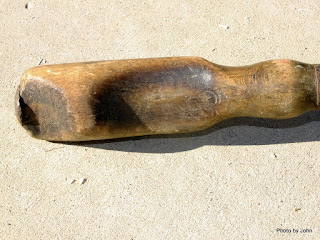 Question #1: Do you think the handle was accidentally burned, or do you think it was burned to create an ergonomic grip that gives much greater twisting power?

That one sort of intrigues me, but it's not the key question. 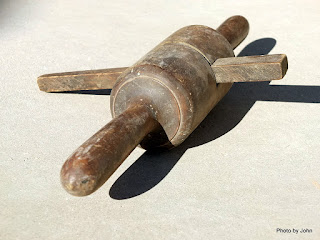 Question #2 - What in the world is this? The main piece is about 15" long and over 4 inches in diameter. It's very nicely turned from a single piece of wood, possibly maple. At mid-span, there's an wide kerf through half of the body. A large, tapered wedge pierces the body. 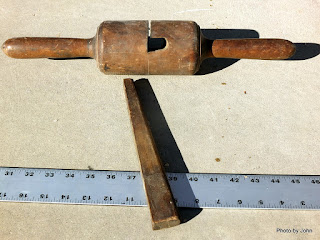 The wedge is flat on one edge and radiused on the opposing edge. I would have expected the receiver for the wedge to have been shaped by boring the radius through the body, but it's very clear on close inspection that the D shaped receiver was created with a coping saw or something similar.

It's a very well made tool, but what is it?? Clues, suggestions, and comments desired and appreciated!

Question #3 - Why'd I bother to haul this stuff around the country?? Only a couple pieces are remotely usable.
Posted by Just Finding Our Way at 2:30 PM