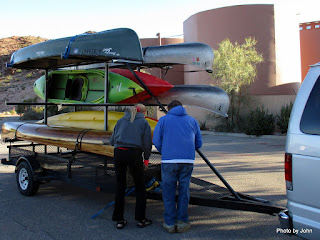 One of the challenges of multi-day river trips is that you organize them long before you know what the weather forecasters anticipate. Since we were going to be in Vegas for a week, and Kathy was going to have a day off the middle of the following week, we decided to append a Black Canyon trip to our Vegas week. Since Helen had some other shuttles in the area, we scheduled our launch with her. 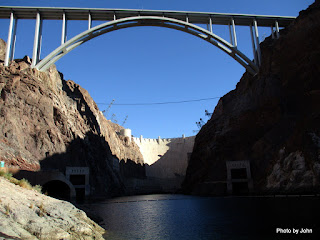 It's always special to launch below Hoover Dam. The view has changed since we first did this. It was fun to watch the progress of the bridge construction years back. We end up with a much better view than the tourists on the bridge, peering over the high, solid rail. 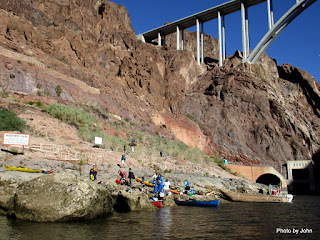 For the first time in years, we launched as part of the third launch of the day. There were three outfitters launching at the same time, including one who had their two little dogs running loose, creating a tripping hazards. We had three boats, another outfitter had two canoes with five adults and two small children, and the third outfitter was launching four solo kayaks. 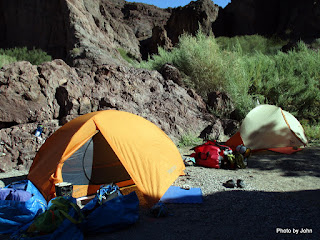 Lake Mead (the lake below Hoover Dam, created by Davis Dam at Laughlin) was the lowest I've seen in quite a while. With the lake that low, we felt comfortable snagging the little pocket camp right near the beach. I've seen this spot under water in other years. It was nicely protected from the stiff upstream breeze. 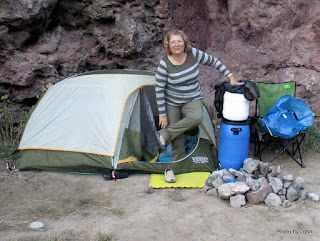 Kathy assured her tent, clothes, and chair were all color coordinated. Too bad she didn't paint the blue drum to match! ;-) 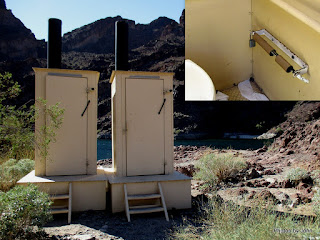 One of the advantages of camping at the Arizona Hot Springs beach is that it has the only toilets above Willow Beach, 8 miles further downstream. Toilets it may have, but it paid to come prepared.

Truth in advertising - the pump-out boat arrived the second morning, reducing the level in the tanks and refilling the toilet paper racks. 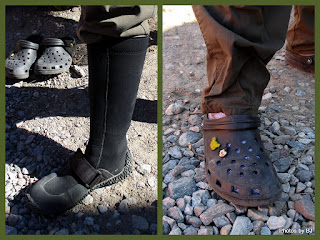 I managed to screw up my packing. I usually include a pair of shoes for in camp, separate and apart from my choice of boat shoes. This time, when I was packing I figured on including the tennis shoes I was using in Vegas for camp shoes, but failed to include them when I finished up my camp packing our last night in Vegas. BJ bailed me out since she has a total of three pair of shoes and I could fit into her Crocs, Mickey Mouse and all. 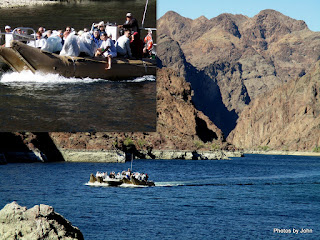 The motor raft left the dam about an hour after we did, and stopped along the way. When they went by camp, it was interesting to see a bunch of the passengers wrapped up in what were either plastic trash bags or disposible plastic ponchos, in spite of the blue skies and nice temperatures. 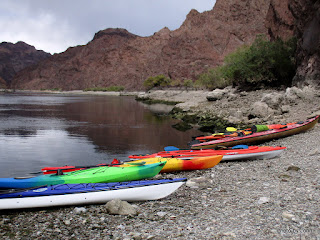 Because of the stiff upstream wind our first day, all of the guided day trips passed us by for lack of time. Our second day we had two guided kayak day trips, a guided hiking day trip, a large group of "outdoor educators," and several small hiking groups who all decided to some to the hot springs because of the rain west of the city. The hot spring was very busy! 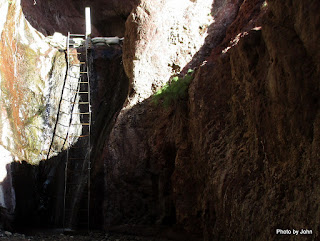 I didn't take the camera up to the hot springs, but did try to get a picture of this year's version of the ladder. It's been the same ladder for many years, but lost the handles at the top in a flash flood a year ago. Now the ladder has a 4x4 post bolted to the top with a couple handles screwed to the post. Not as good as the original handles, but way better than the total lack of handles like we had in March. 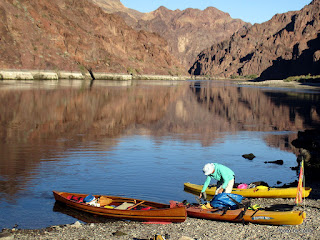 We were greeted with glassy smooth water as we loaded out on the morning of our third day. 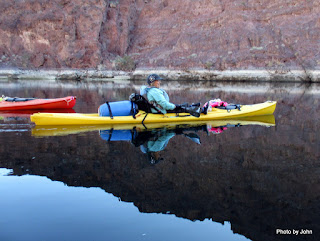 Kathy was paddling BJ's spare ScupperPro since we haven't gotten around to doing the repairs to Knot Too Shabby. I couldn't resist the reflection! 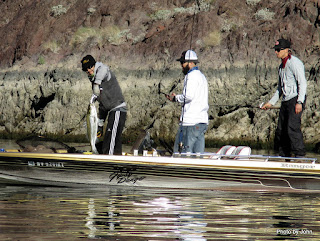 It was a slow, lazy paddle downstream as the forecast tailwind developed. The only excitement was the fisherman that caught a big striper just as we drifted by.

The tailwind continued on our drive home, almost all the way to Phoenix. Loved the improved mileage. It was nice to get home where gas prices were about 65 cents cheaper than Vegas!
Posted by Just Finding Our Way at 2:30 PM