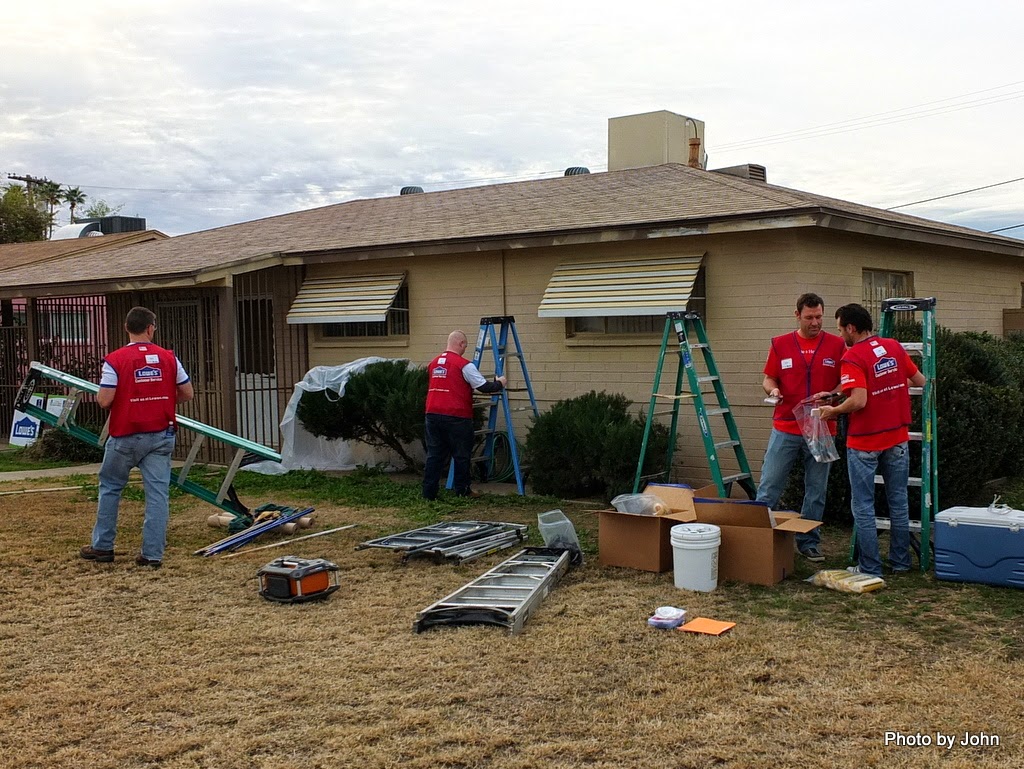 With the Super Bowl in town, there were lots of activities loosely associated with it. One multi-part project involved Rebuilding Together with support from Lowe's, Bose, NFL, and others. I was fortunate to serve as a 'Captain' at a home that received a list of improvements including external painting. 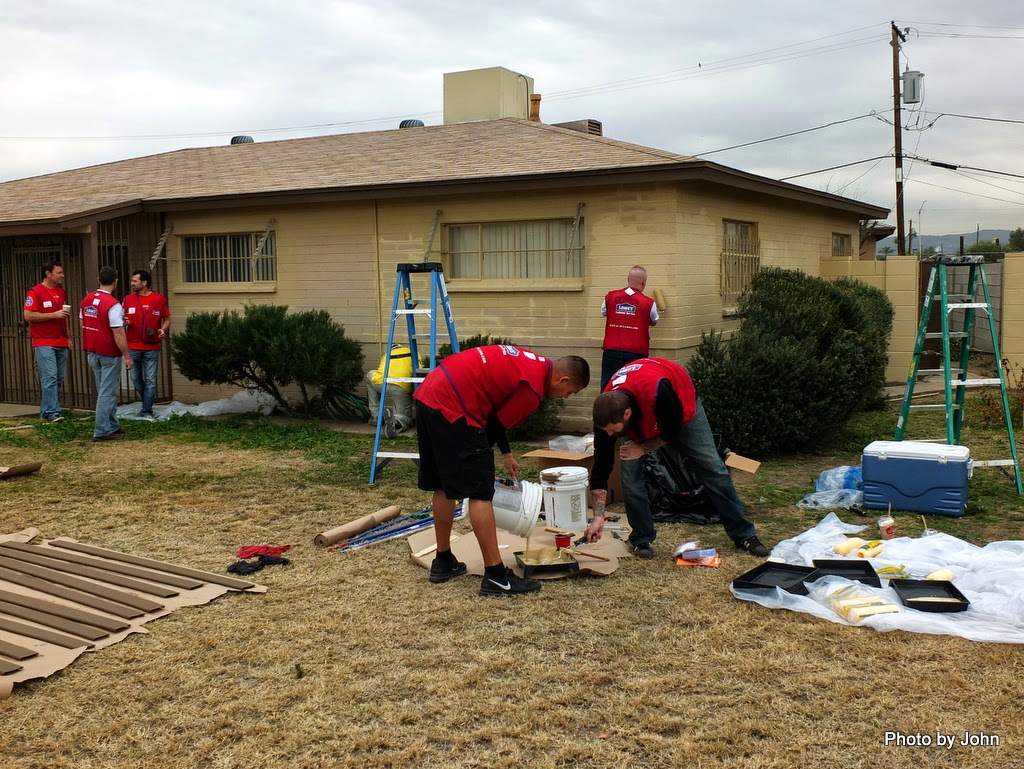 The home owner has been in the home for 46 years and is now 101 years old. She's a sweet lady who needed some help to keep her home in good repair. The Thursday team from Lowe's started on the trim per the plan, but then we continued with the field color since the forecast called for rain on Friday. 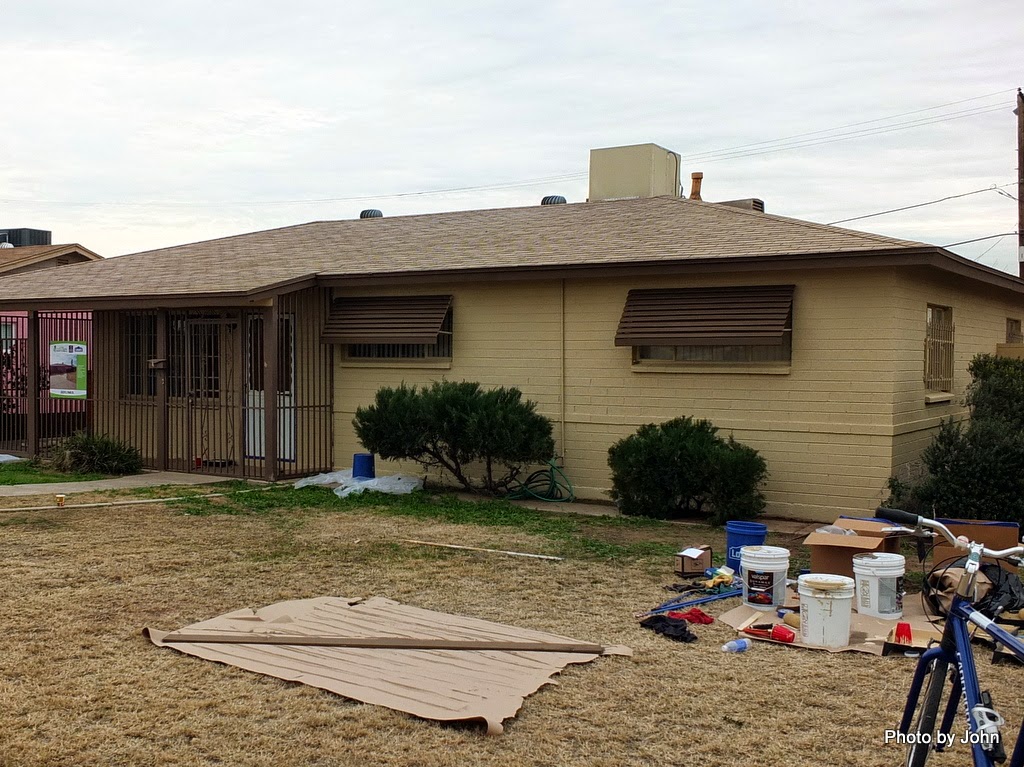 By the end of the day on Thursday, we had everything painted except for the area under the carport which we could do on Friday, even with rain. 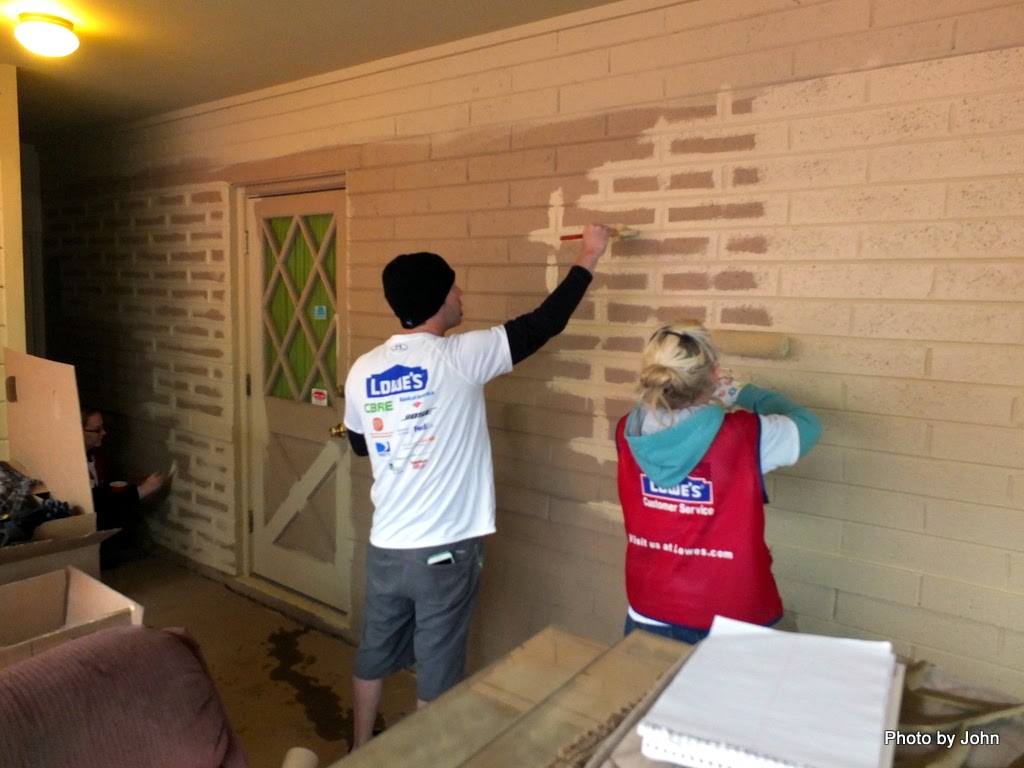 On Friday we had more volunteers from Lowe's. On our team we also had a couple guys from Bose. What makes this fun for me is that invariably, every volunteer has a smile and a 'can-do' spirit. This group was no exception, and actually set a higher bar for the amount of 'can-do' spirit. The Lowe's folks were all from different stores, but clearly enjoyed working together. 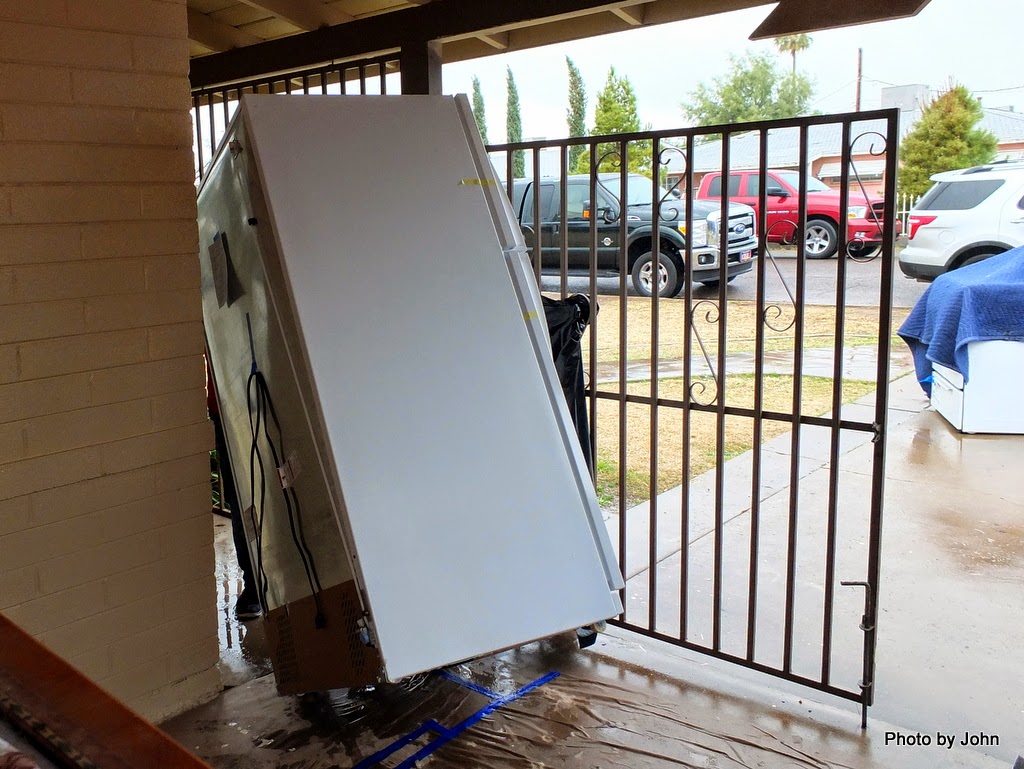 The Lowe's truck showed up with a new refrigerator and stove. You could have set your watch by their arrival, right on schedule. Thankfully, the paint was dry on the front door by then! 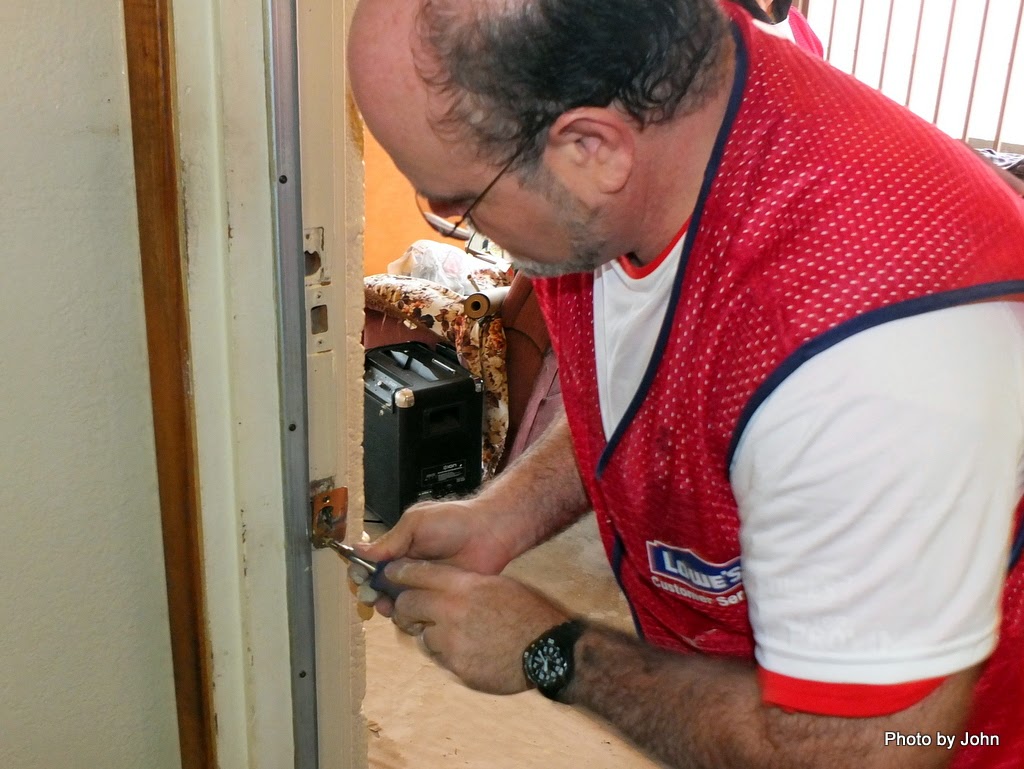 Larry did all sorts of stuff on this project - installed a new front door lock set, resolved issues with the front porch light, helped paint, and then noticed that the strike plate on the back door needed to be reset to better align with the door. It was really nice to work with folks that see what needs to be done and just gets it done - right. 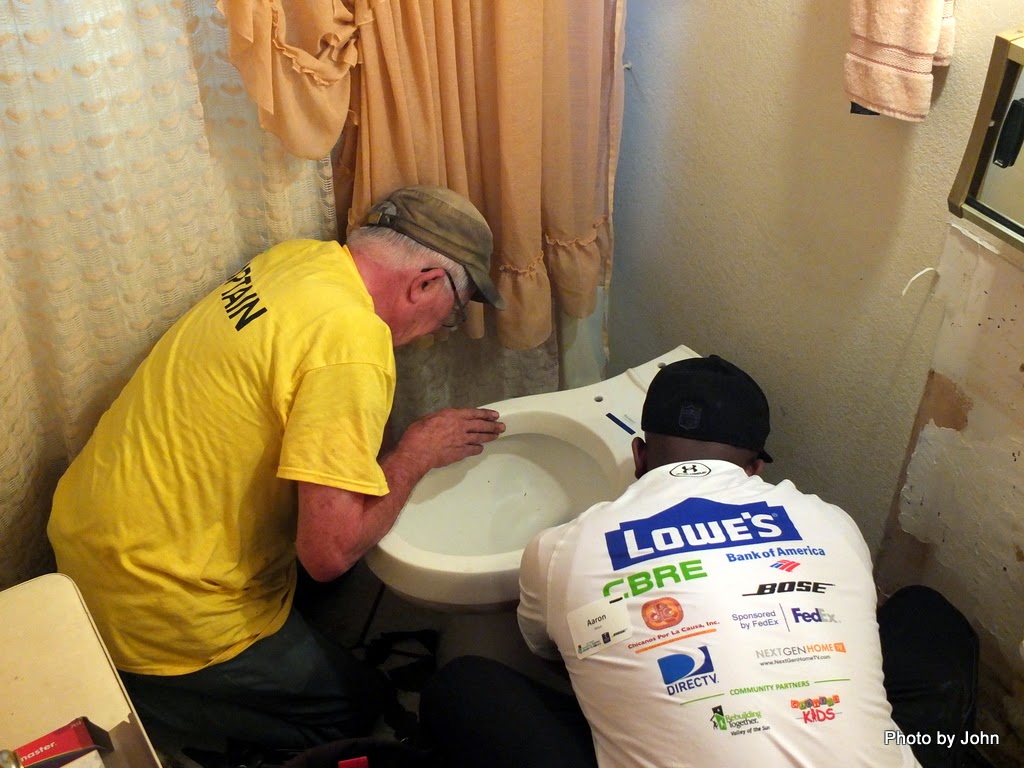 We knew there were two new toilets and bathroom vanities to install, but none of the valves, traps, and hardware had been purchased. The other captain on this project found a Lowe's plumbing specialist (aka plumbing goddess) among the volunteers. 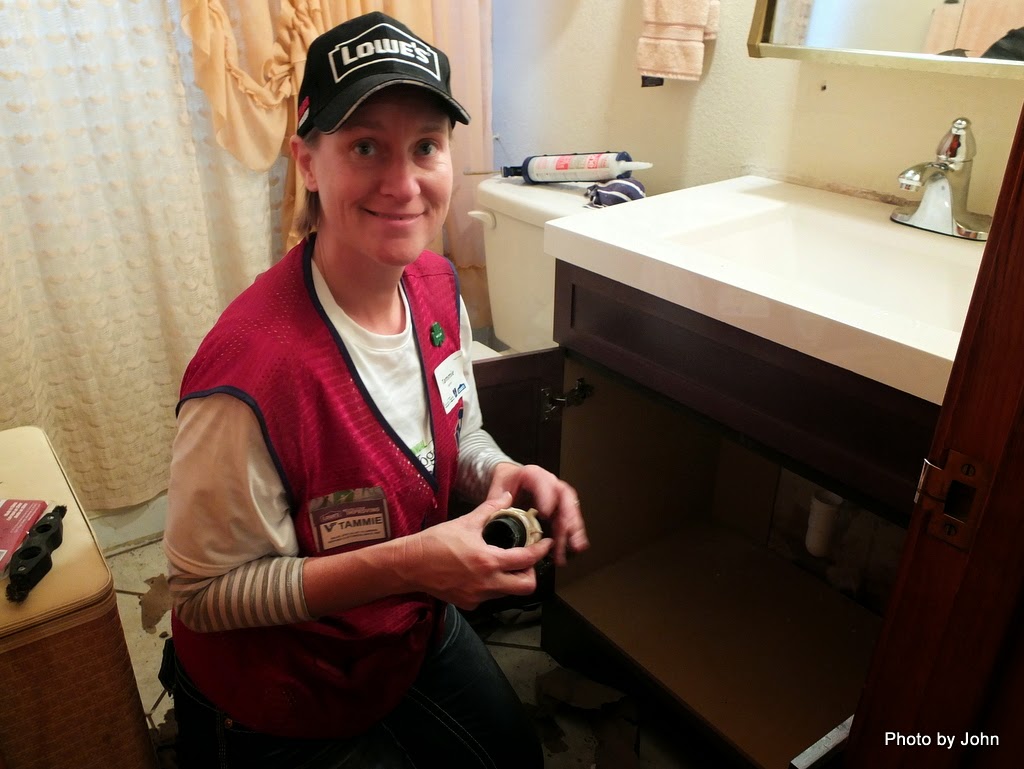 Tammie was a life saver. She took one look and started making a list of everything that was needed. With one of the Rebuilding Together staff, she was off to the nearest Lowe's with list in hand. She came back with everything needed, and then, along with a Bose employee, stuck around for a couple hours past quitting time to get the installations finished up. I was impressed! 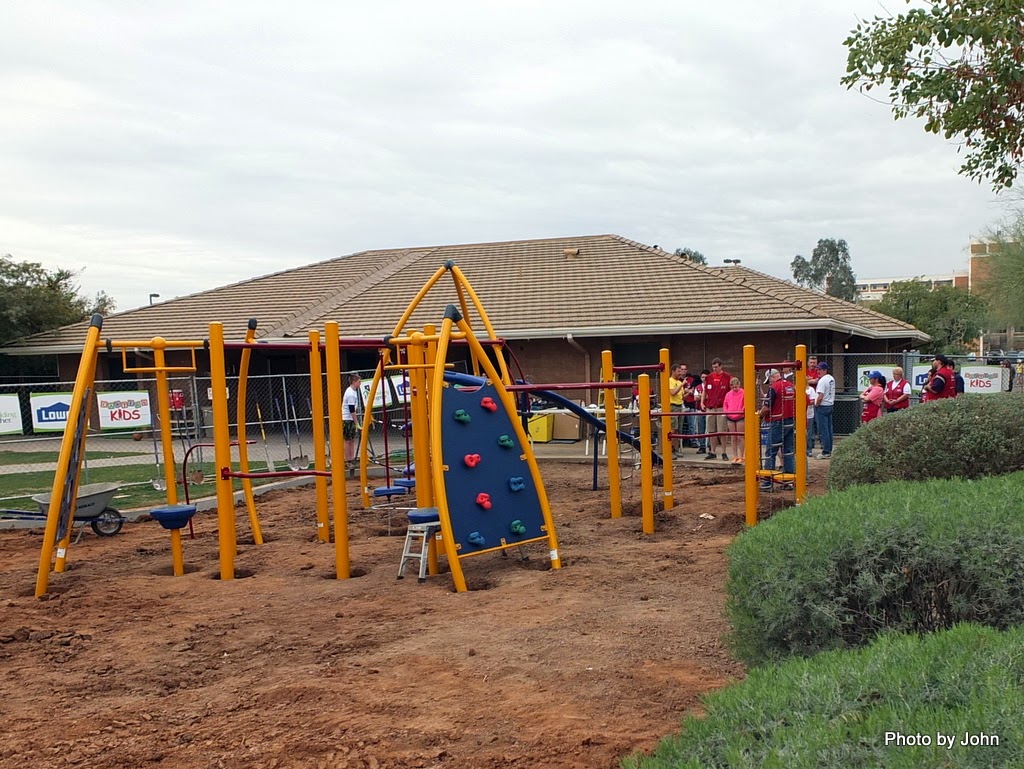 While we were concentrating on this one house, there were two other home repair projects of similar complexity. In addition, still more volunteers helped install a new playground at the Crisis Nursery in Phoenix. I didn't get any pictures of that completed project since they finished up before we were done at the house.

That wasn't all of the good stuff during the week. Along with the short visit from our Alaska contingent, we had a chance to spend an evening with Suzanne, author of the Take To The Highway blog. A very fun evening, and we're making plans for more fun stuff together in early March.
Posted by Just Finding Our Way at 2:30 PM