By the time I got the last post done and drove over to the Carl Hayden Visitor Center, I was too late for the 9 a.m. tour, but that was alright. 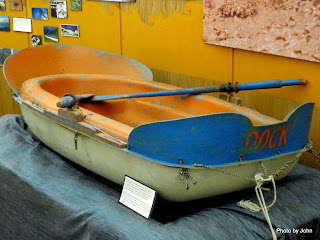 I was surprised, but shouldn’t have been, to see that they had a couple historic boats on display. The Sportyak, a small plastic rowboat (not sure why they infer a connection to kayaks), was rowed by Dock Marston in one (or more??) trips through the Grand Canyon. Looks like a bathtub, and I suspect it rowed like one. It would be a full time job bailing in white water. The most well-known photo of him rowing it in the canyon showed it without the additional bow and stern deflectors. 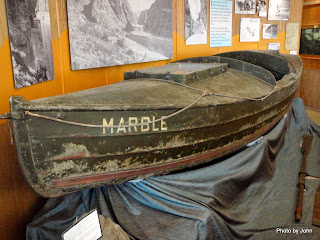 The other boat was one of the Galloway type that were used by the USGS during their investigation of potential dam sites on the Green and Colorado rivers. It was 18 feet long and weighed 800 pounds, empty! 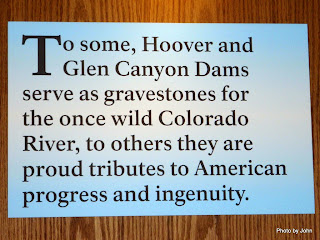 The volunteer tour guide had worked at the dam for most of his career as an electrical engineer and was very proud of the dam, the operation, and the economic benefits. I was pleased to see that the displays at least recognized that there are serious questions about the dam, which buried over 100 miles of beauty and significantly increases evaporation loses from the Colorado river. 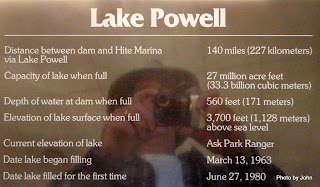 There was a lot of other information about the large and wonderful reservoir. No mention that it hasn’t been anywhere near full for over 15 years. 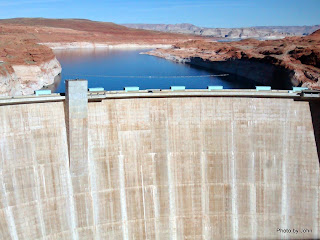 The dam tour itself was inexpensive, and worth about as much. There were only five of us on this particular tour. 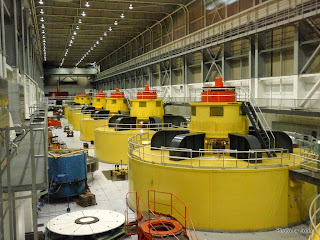 We did get as far as the viewing gallery for the powerhouse. Four of the generators were turning and one was in the process of being rebuilt. The guide says that when they run the High Flow experiment they won’t be able to use all of the water for generation and will be using the bypass tunnels. 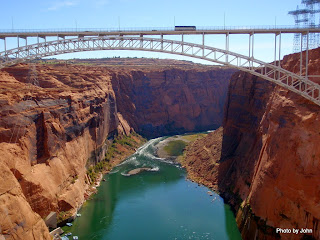 Perhaps the best part of the tour was getting a view of the bridge from a different angle.

I was going to stop at the Powell Museum in downtown Page, but in spite of being the site for tourist information, tehy had no parking for anything over 20 feet long so I headed out of town. 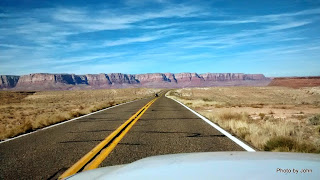 It was a very nice 90 mile drive to get to Lees Ferry, about 12 miles as the raven flies, from Page. 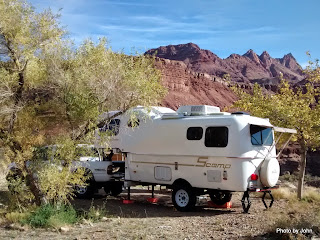 The campground was less than half full, even on a Saturday. $6 per night with the Senior pass. No hookups or showers, but there are flush toilets in the bathroom, drinking water is available, and a dump site is nearby. As you can see, some of the sites aren’t level, but it was oriented the right direction!

This post made possible by the free wireless at Mickey D's in Kanab, UT.
Posted by Just Finding Our Way at 10:55 AM