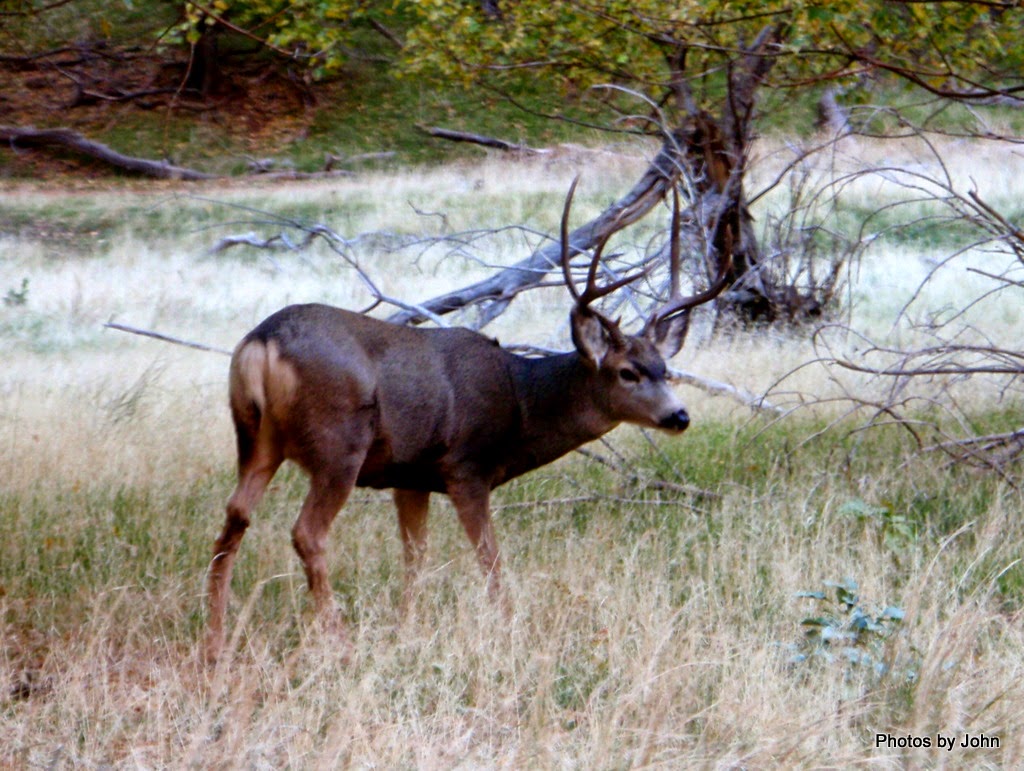 November 12, 2014 - With all the teasers about hiking the Narrows, I just HAD to do it. The shuttles aren’t running during the week this month, but since all of the Zion Canyon parking lots are full by 10 a.m. or shortly thereafter, I headed out with the intent to start my hike about 8 a.m., ahead of the crowds. Lots of deer and a few nice turkeys to be seen. 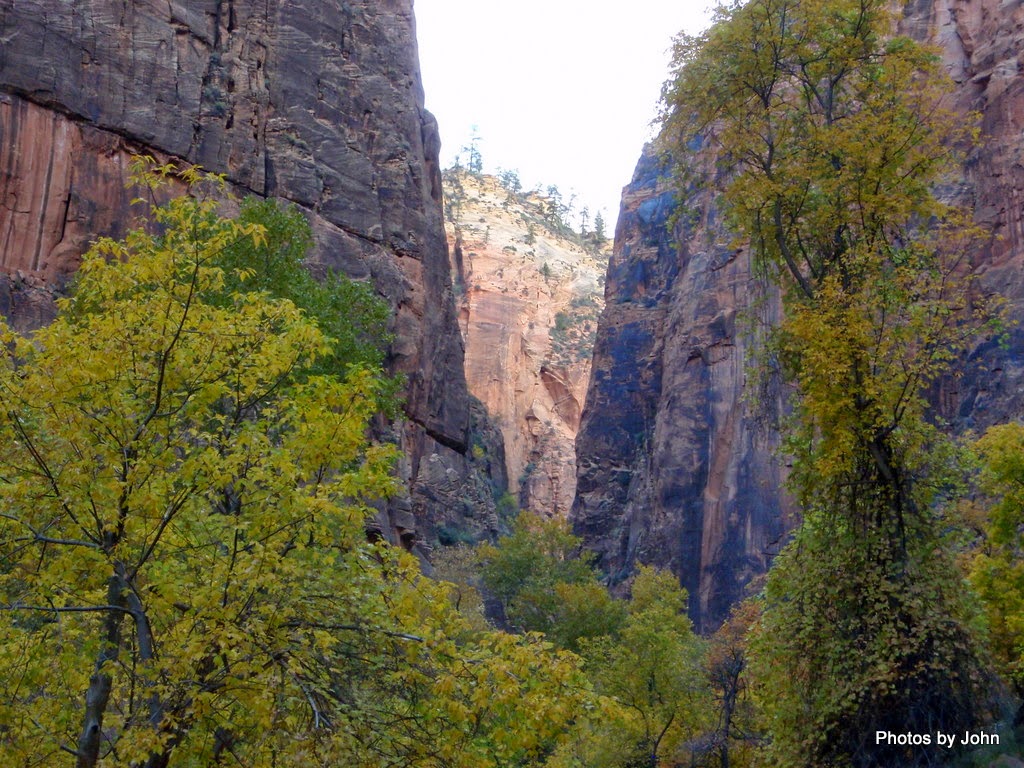 Pictures were a challenge with the low light of early morning and my tired and limited Olympus (still waiting to get the Fujifilm X-S1 back.) That didn’t stop me for taking lots of pictures – I’ll just not bore you with most. Just turning the corner after leaving the end of the paved River Walk, I could see this was going to be a fun and worthwhile hike. And for the most part, my relatively early departure got me the solitude I was hoping. 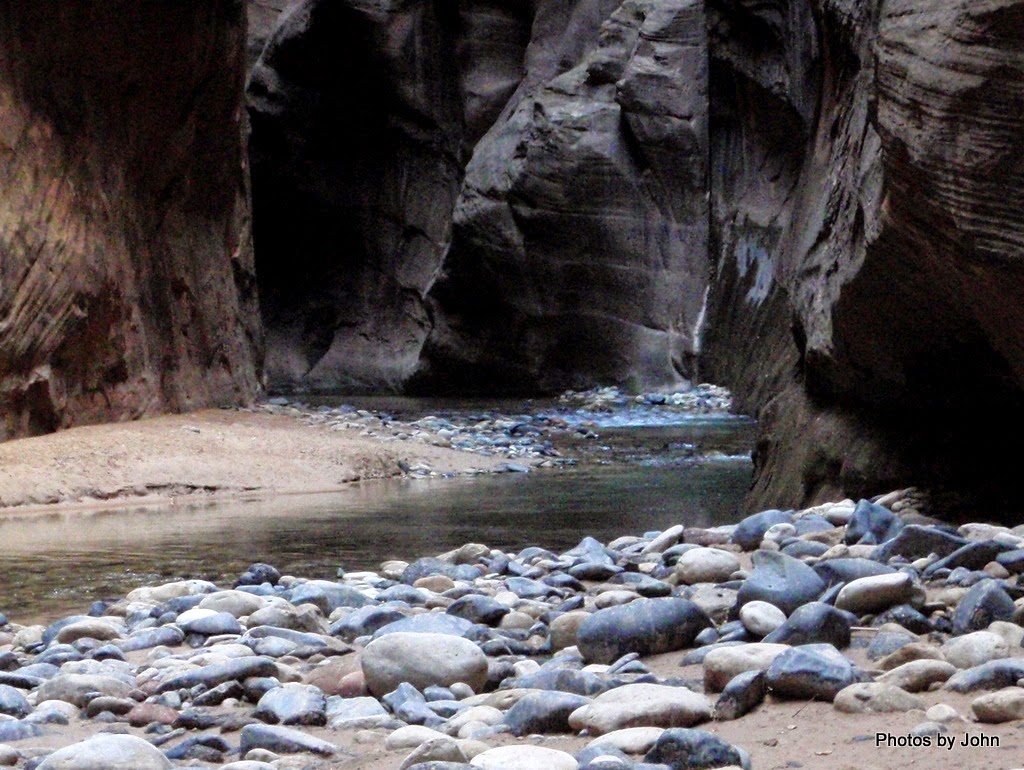 The ‘trail’ usually just had one obvious choice but the ‘surface’ could be cobble, water, or occasionally sand. With the river flowing at 47 cfs, I was never in the 51 degree water deeper than the top of my knee caps, but you had to be observant. I spotted one person walking in water up to his waist – if he’d moved about 8 feet to his left it would have been ankle deep… 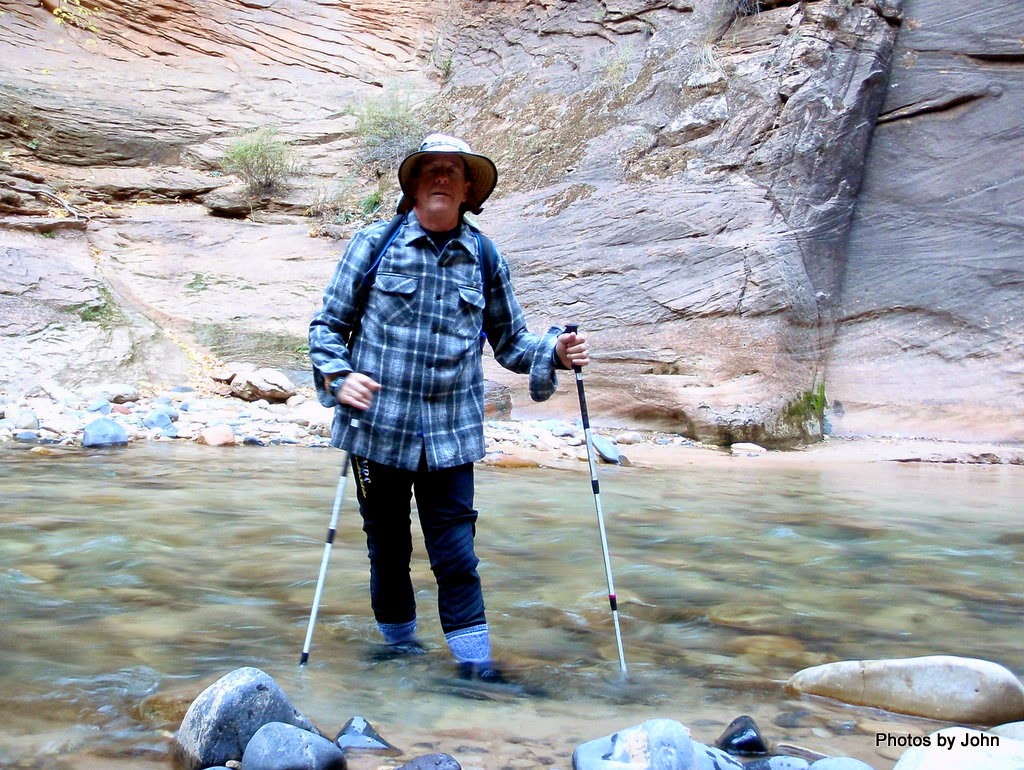 Almost everyone I saw were using rented dry pants, neoprene socks, and boots from Zion Outfitter or Zion Adventure Company. I was using my NRS farmer john wetsuit, wool socks, and my NRS neoprene work boots which proved to be a very good combination. Of course, I was the only person I saw properly outfitted with a Pendleton shirt. And now for some pictures… 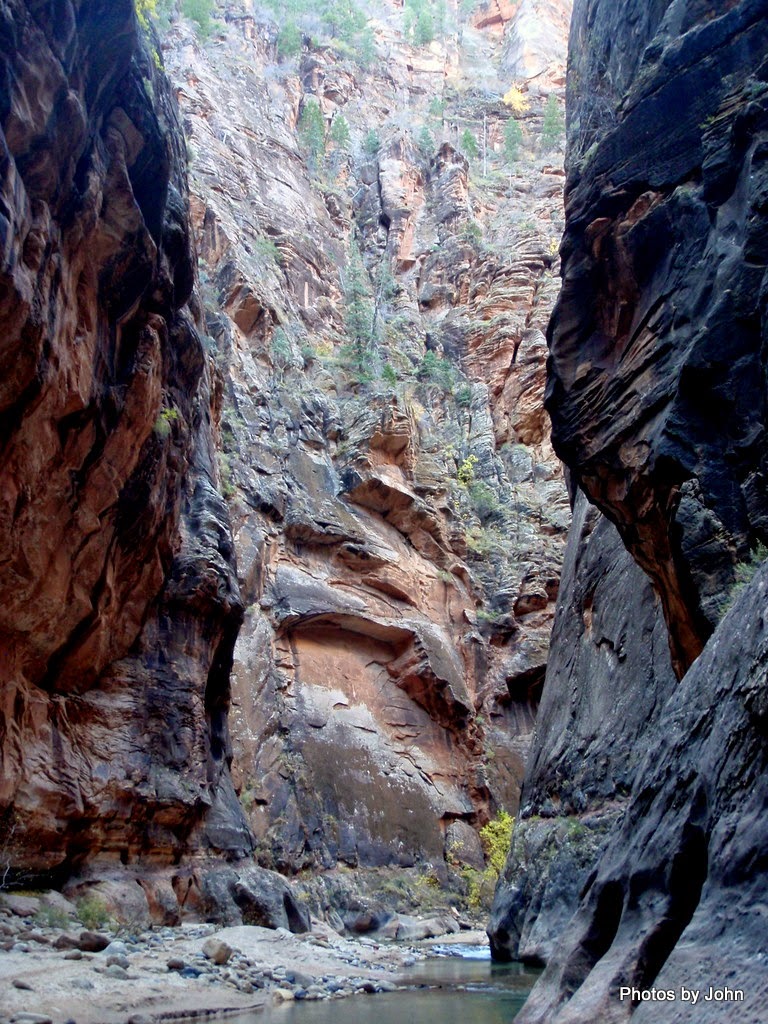 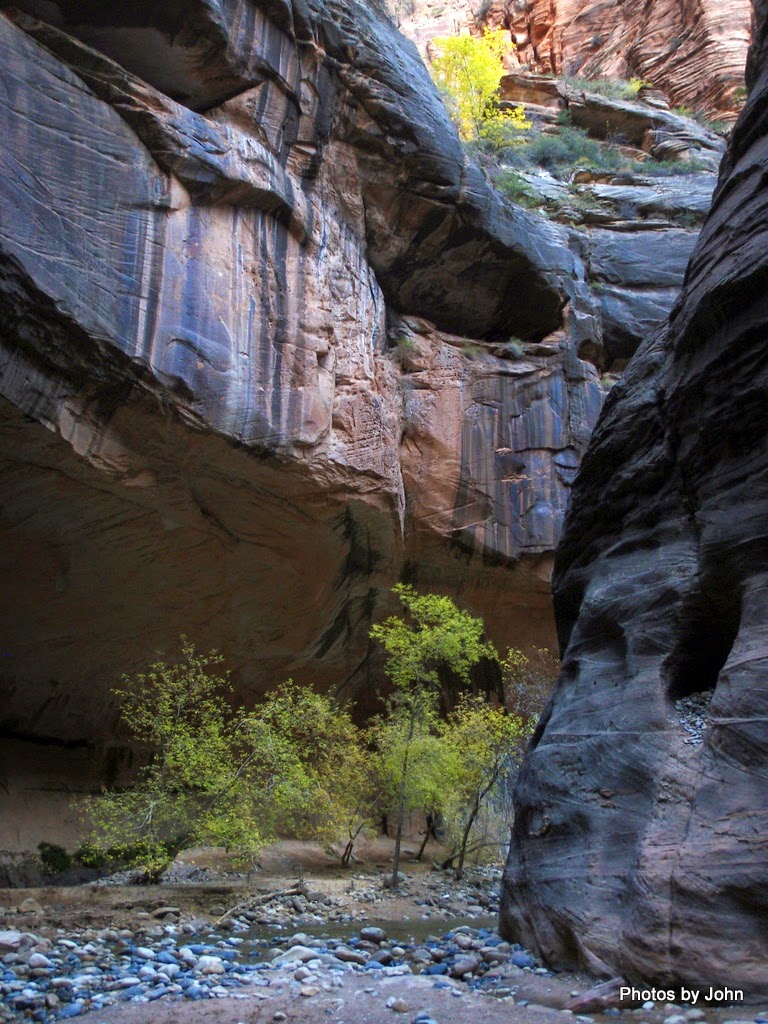 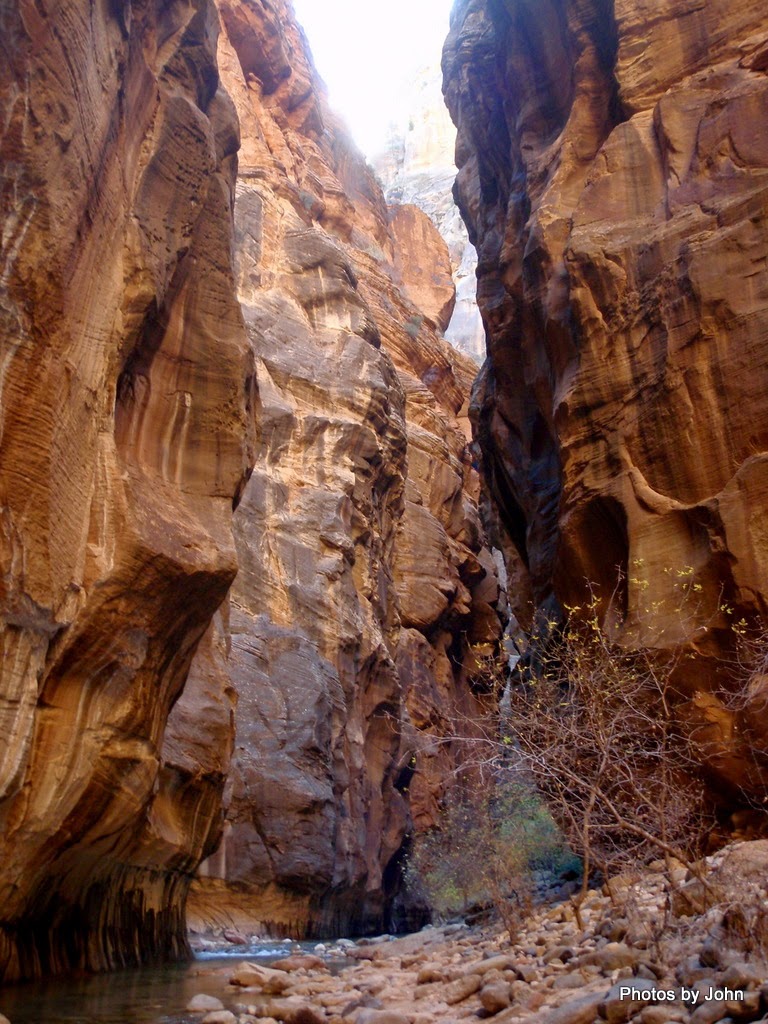 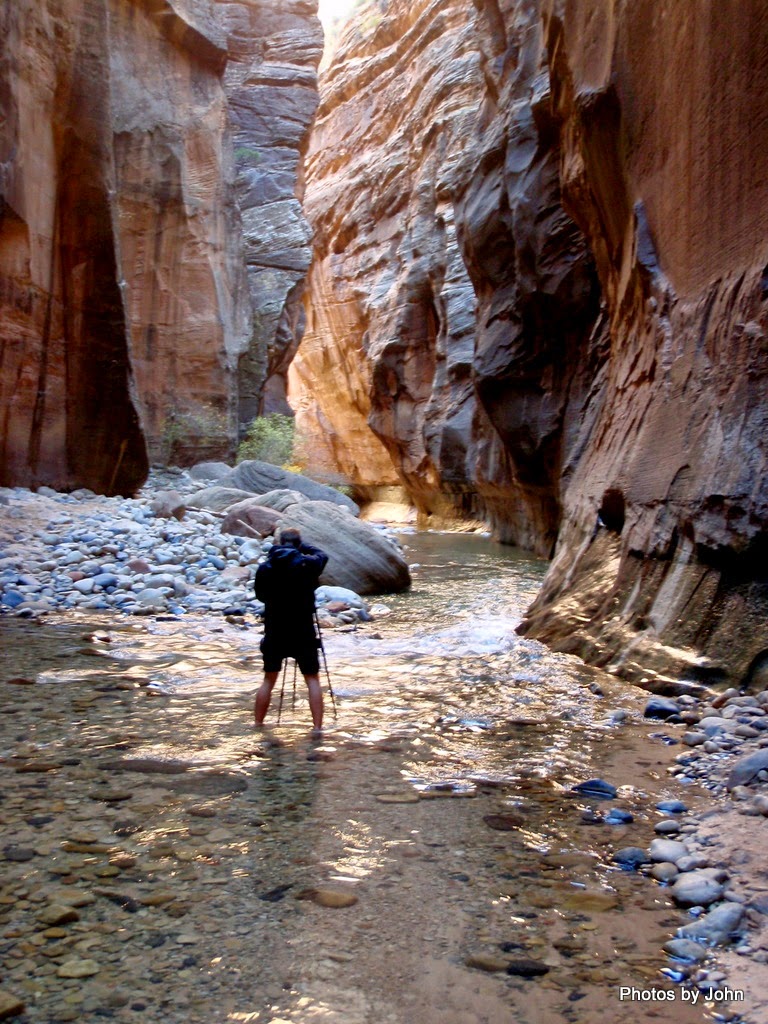 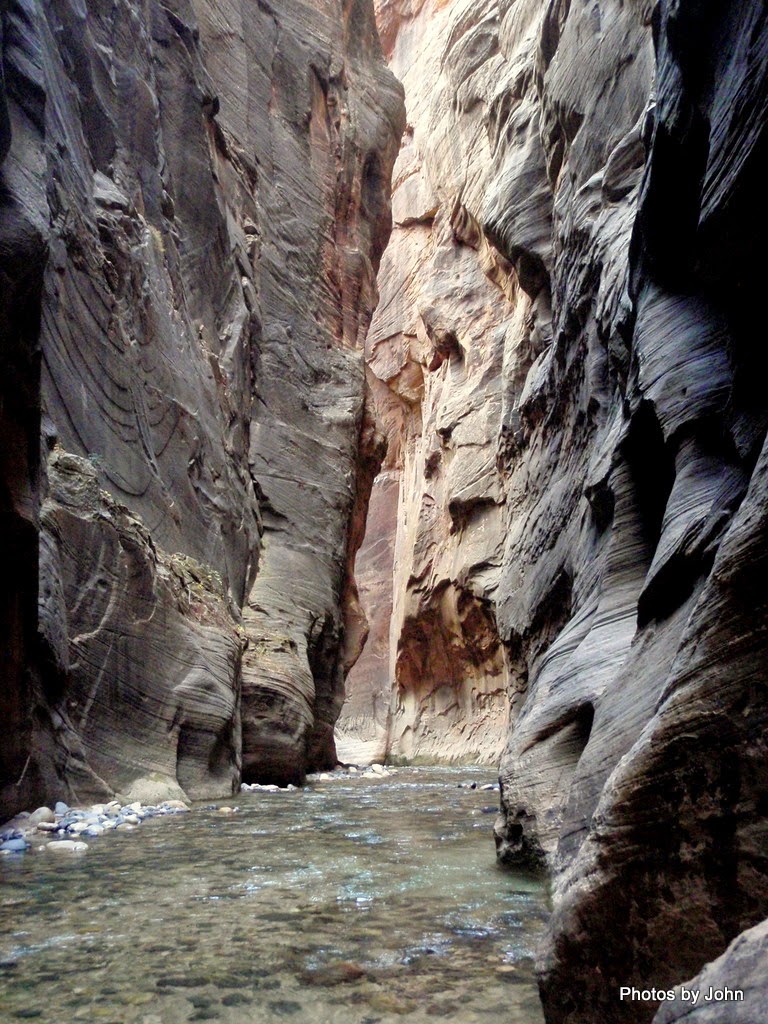 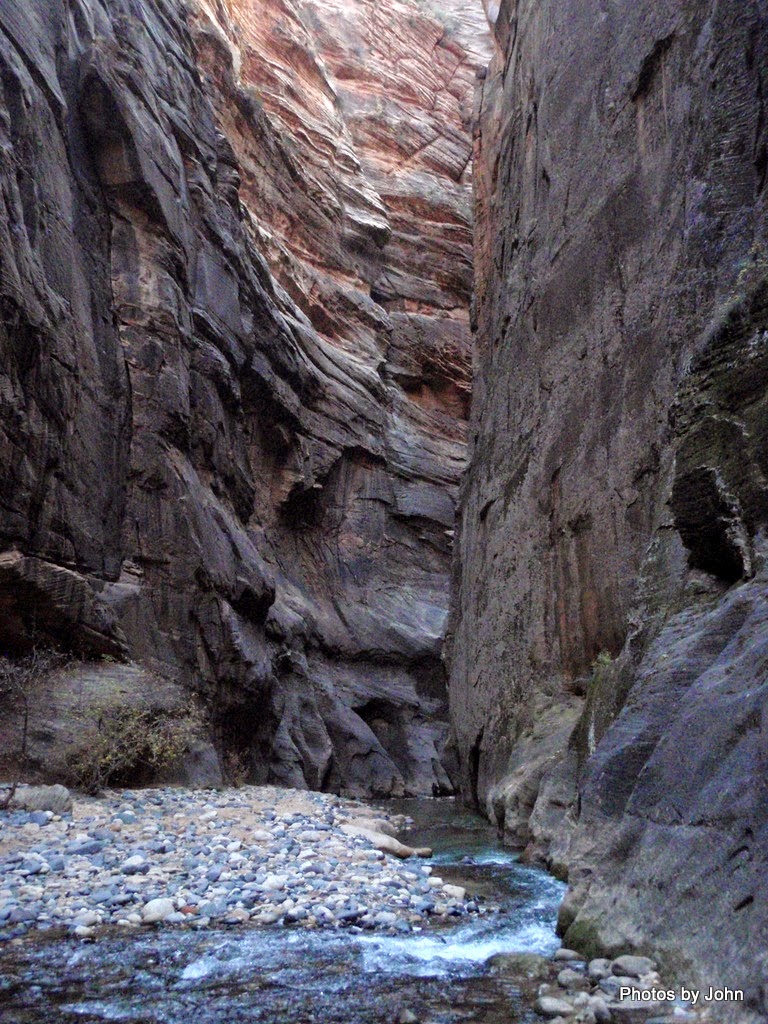 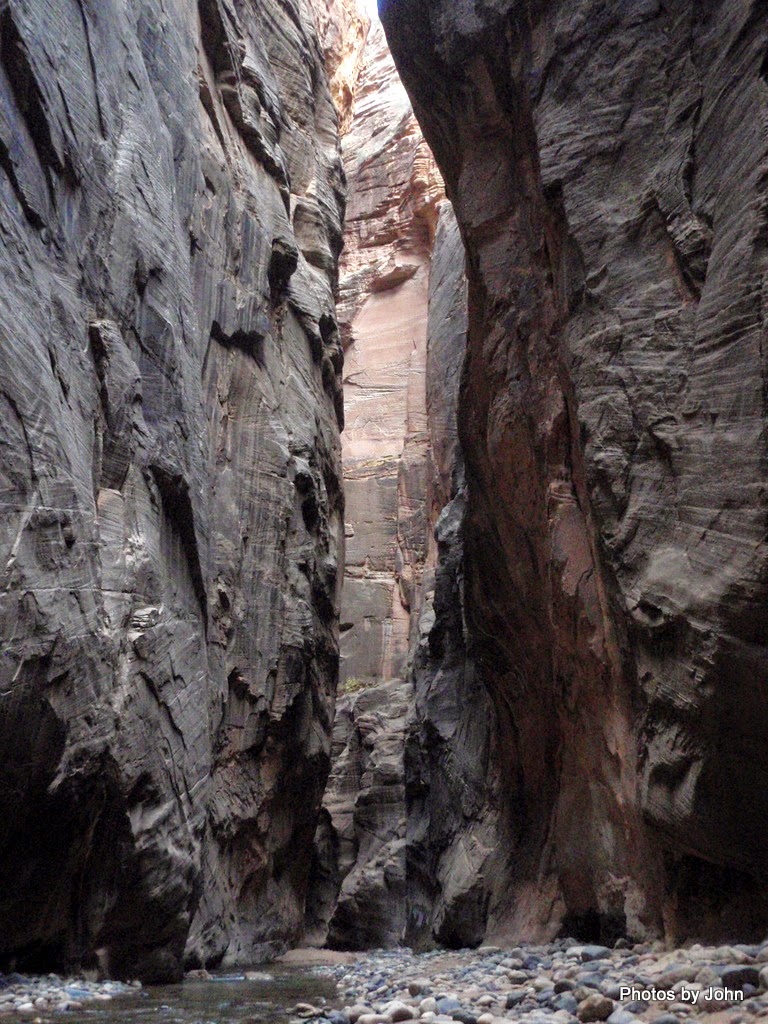 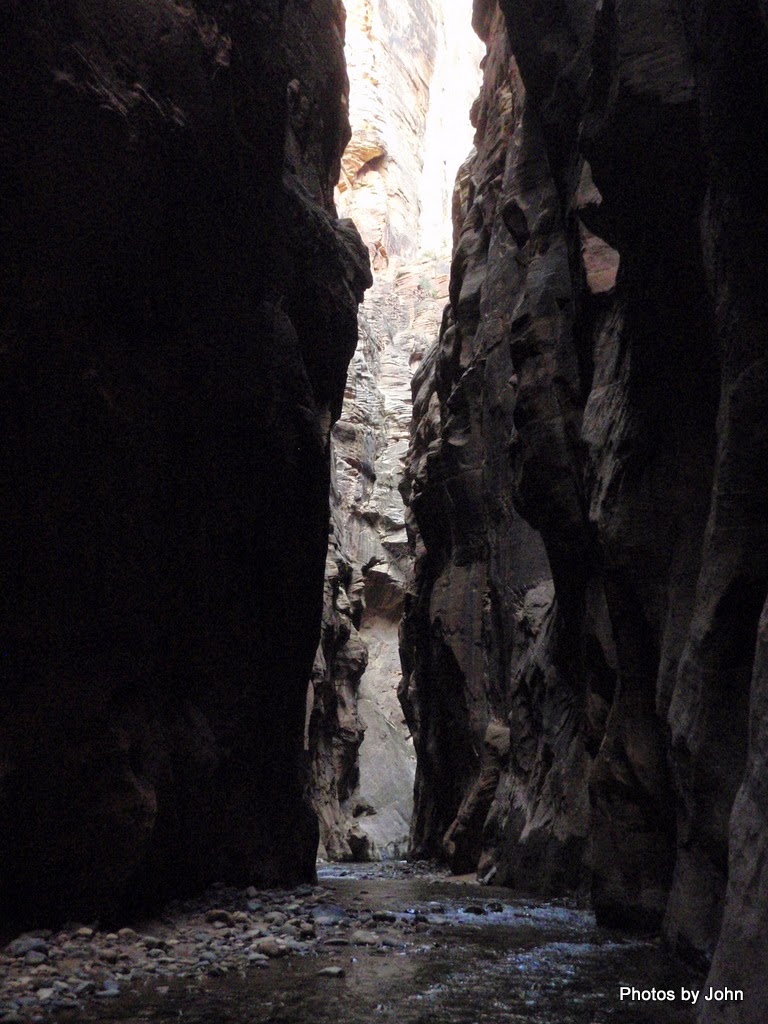 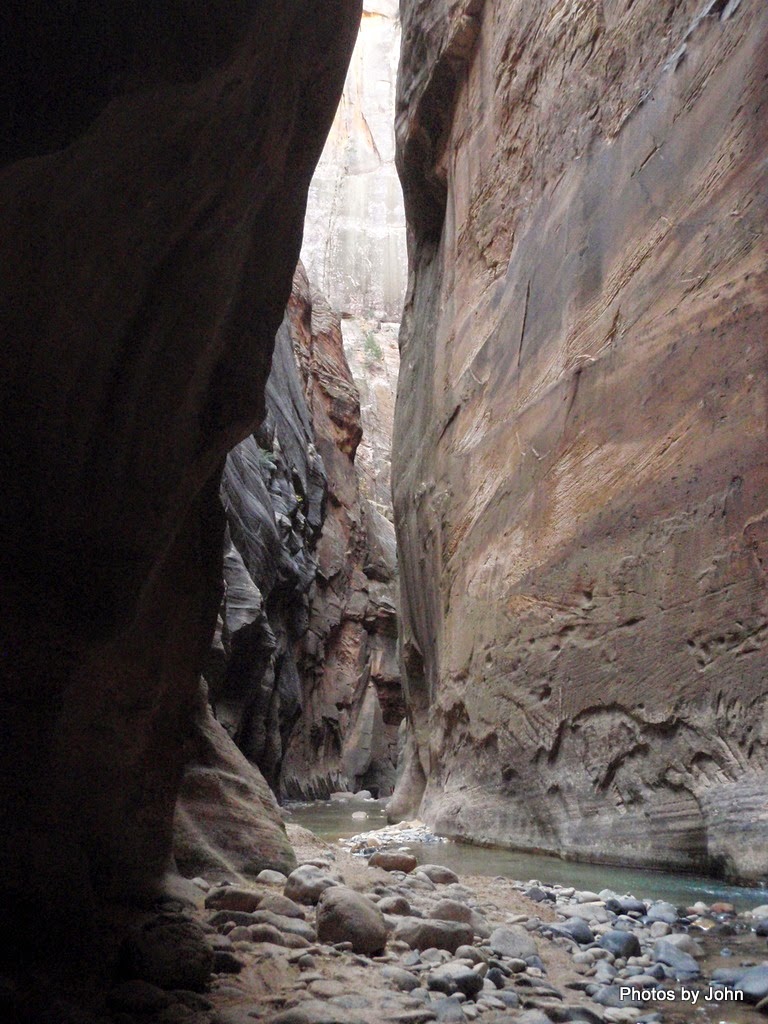 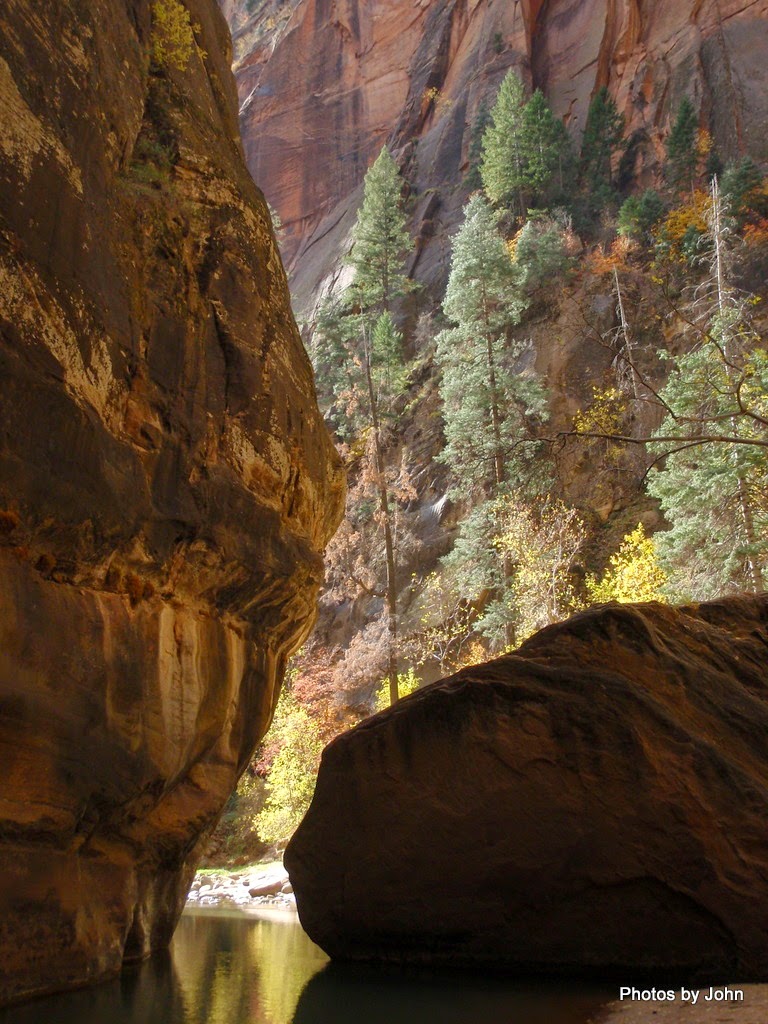 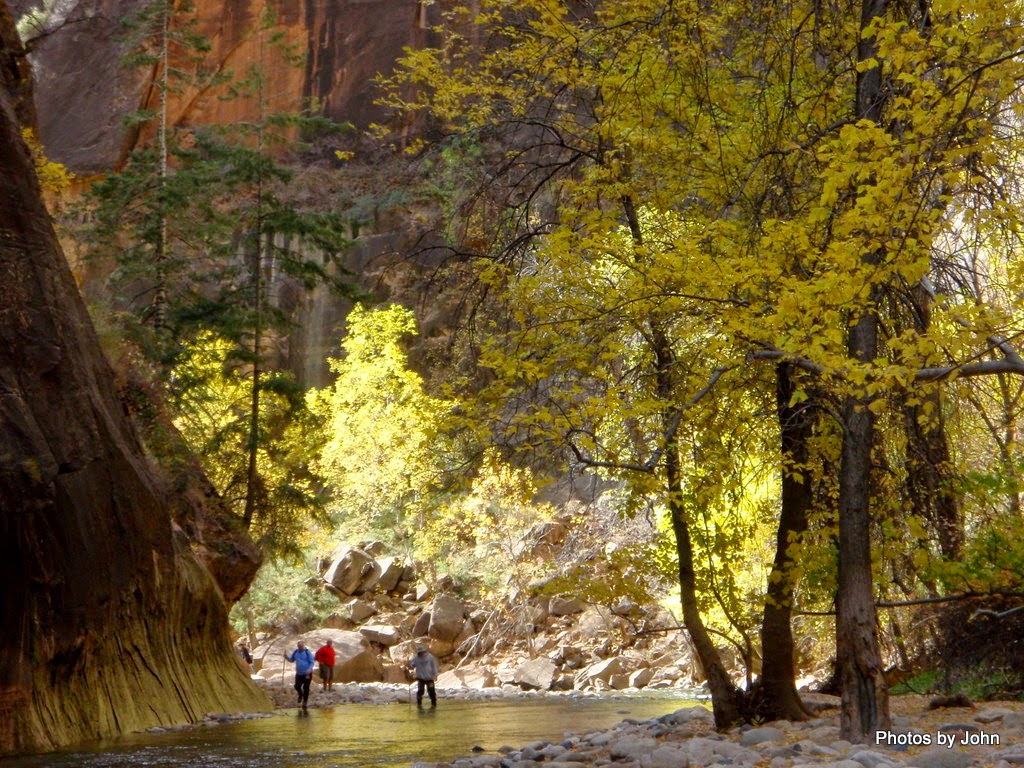 The pictures actually got better on my way back with more light in the canyon, but more people as well. Unfortunately, I used up most of the camera battery going upstream and didn’t take near as many coming downstream. I continued past Orderville Canyon, curious about what was around each corner. Looking at detailed maps later, I apparently stopped just short of where the canyon from Potato Hollow Spring intersects the Virgin River. 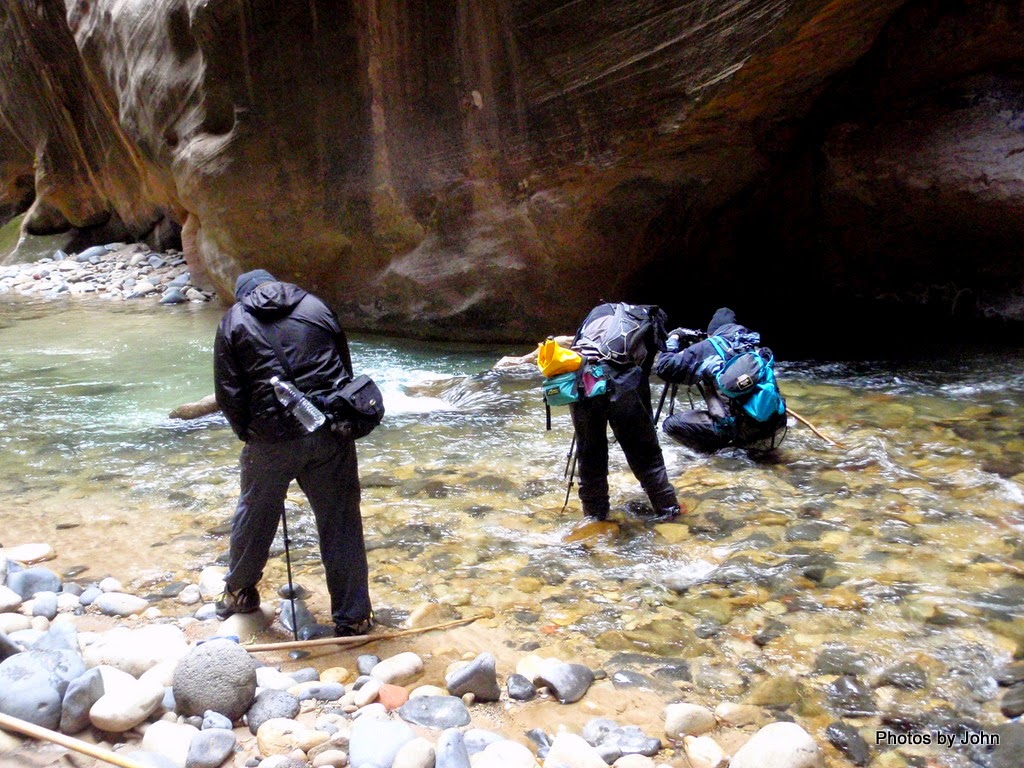 Going upstream I saw very few people. I had one barefoot person with shoes in his hand past me going up but I then passed him both directions as he stood at the same spot in the middle of the river taking pictures for over an hour. I also passed a group of three photographers near the mouth of Orderville Canyon. I saw lots of people headed upstream as I headed down (perhaps approaching 50 but I lost count) including a young couple from Nebraska celebrating their honeymoon. I took their picture for them, but never took one with my camera.

All told, a phenomenal day! About 7.5 miles total which will totally shock some of my friends, but it was delightfully cool and there was a river involved – perfect hiking situation!
Posted by Just Finding Our Way at 2:30 PM