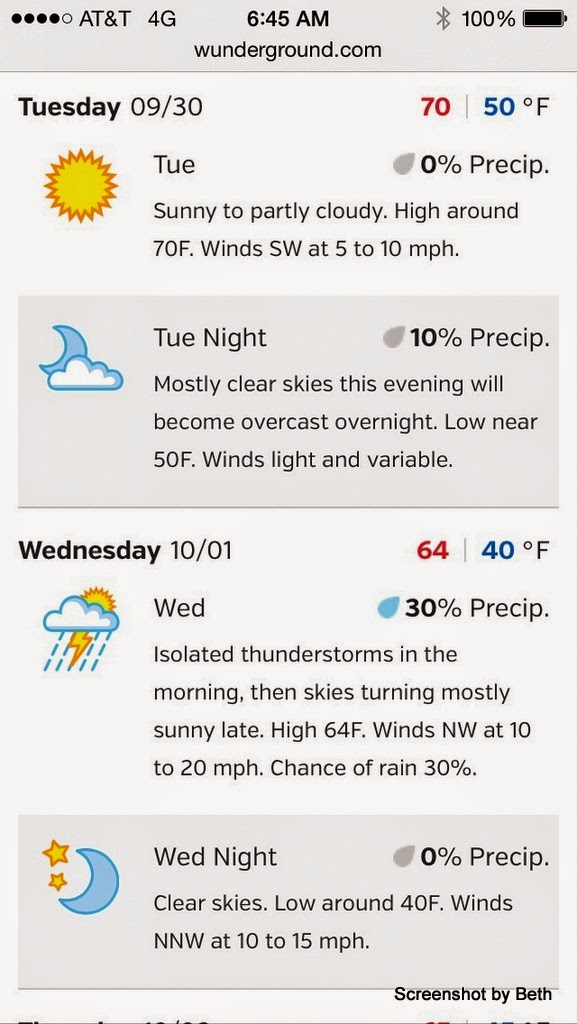 Wednesday, October 1 - One of the advantages of having people join us at the midway point was an updated weather forecast. The weather forecast calling for thunderstorms was accurate.

The skies were clear around 2:30 a.m. but a steady, relatively hard rain started about 3:30 a.m. with thunder in the distance which continued for over three hours with occasional gusting winds. 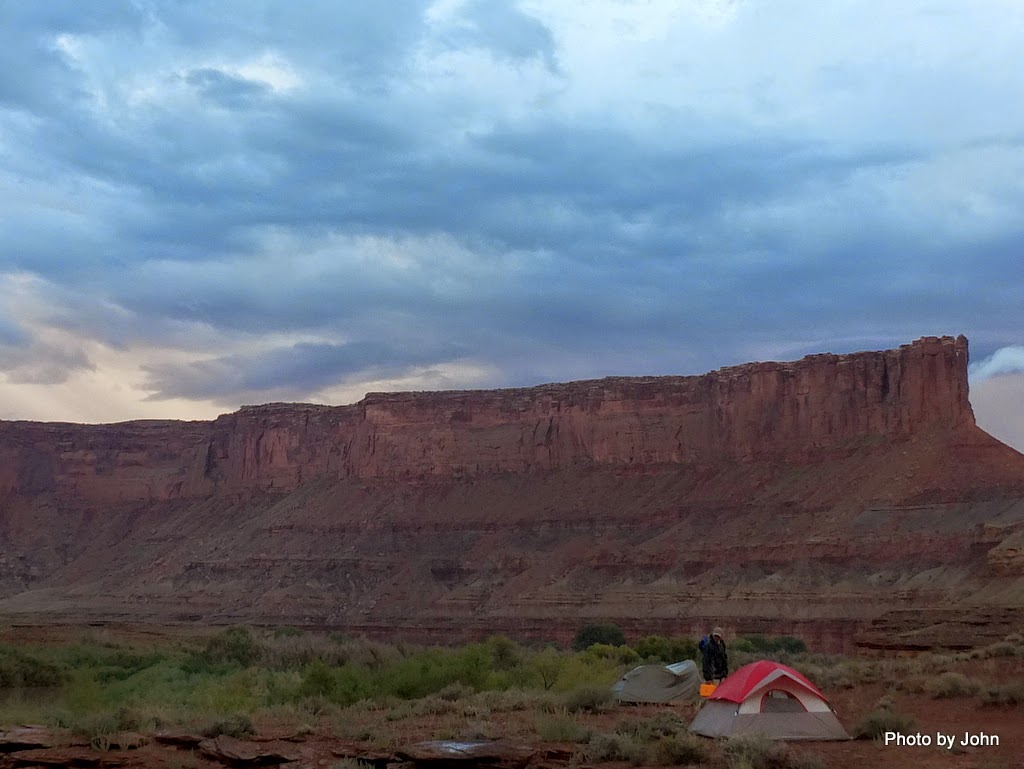 About daybreak the winds calmed and the rain stopped for a while. Unfortunately, it didn't stop long enough to get coffee made. 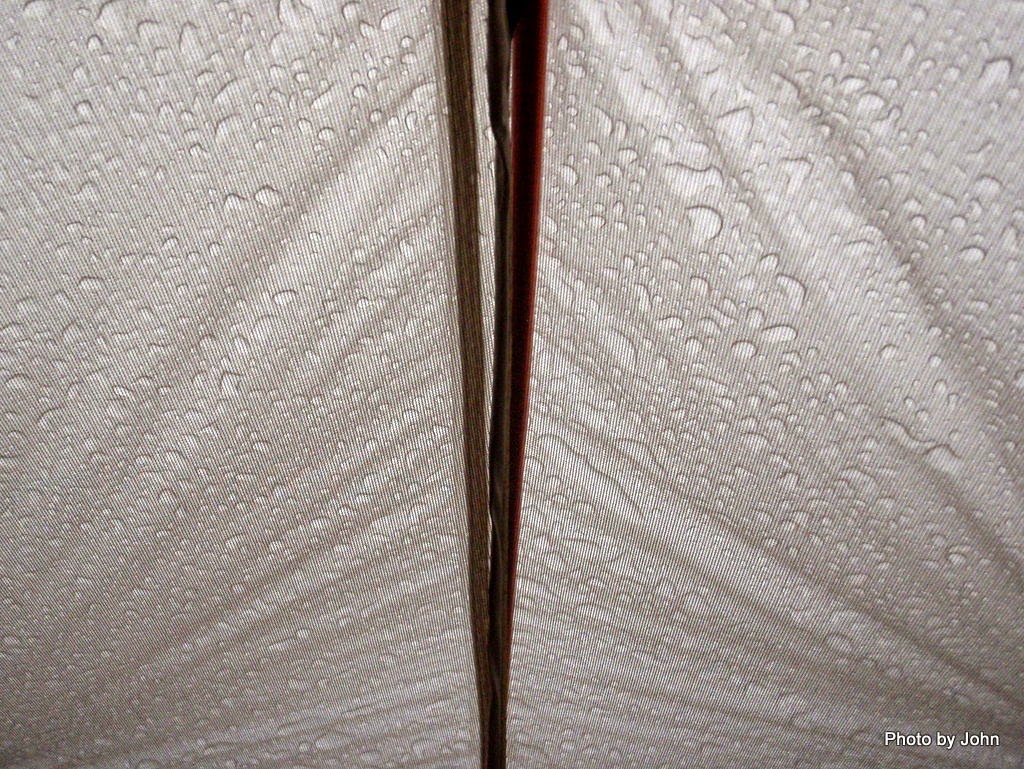 I headed back to watch the rain bead on my tent while those who'd never stuck their head out gloated (thankfully in silence) in their decisions to stay in bed a while longer. 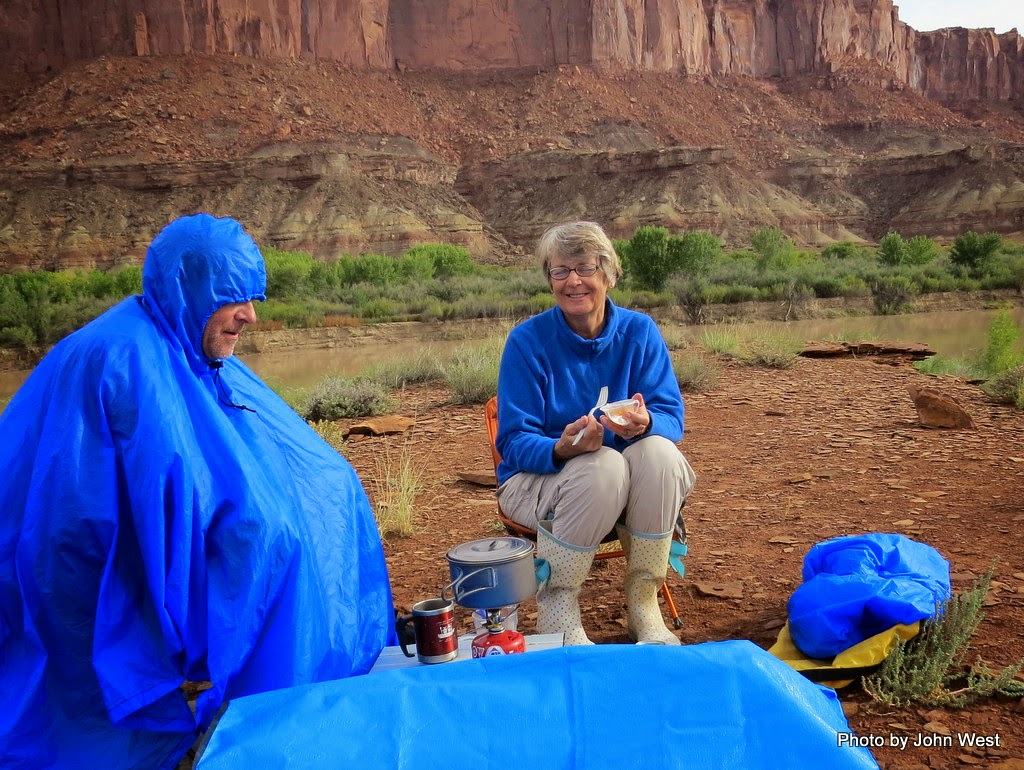 We finally got out and fixed breakfast (oatmeal, fruit, and coffee for me) about 9:30 with skies starting to clear. There was conversation about part of the group hiking up to the tower so BJ went down to her boat to get her hiking boots. She came back to report the peninsula was now an island with the river rising. 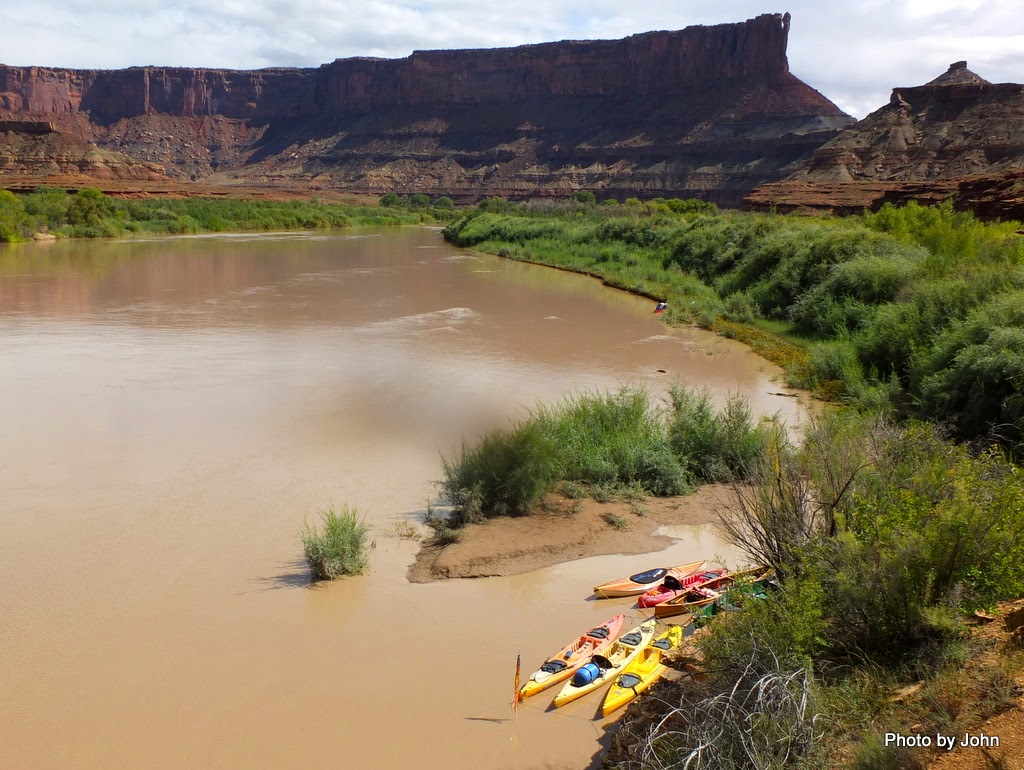 With shrinking sand, we elected to move the boats, tying the whole fleet together below the sandstone ledges. Not a great location if we were expecting heavy rain, but better than the shrinking "island" that had been their home. 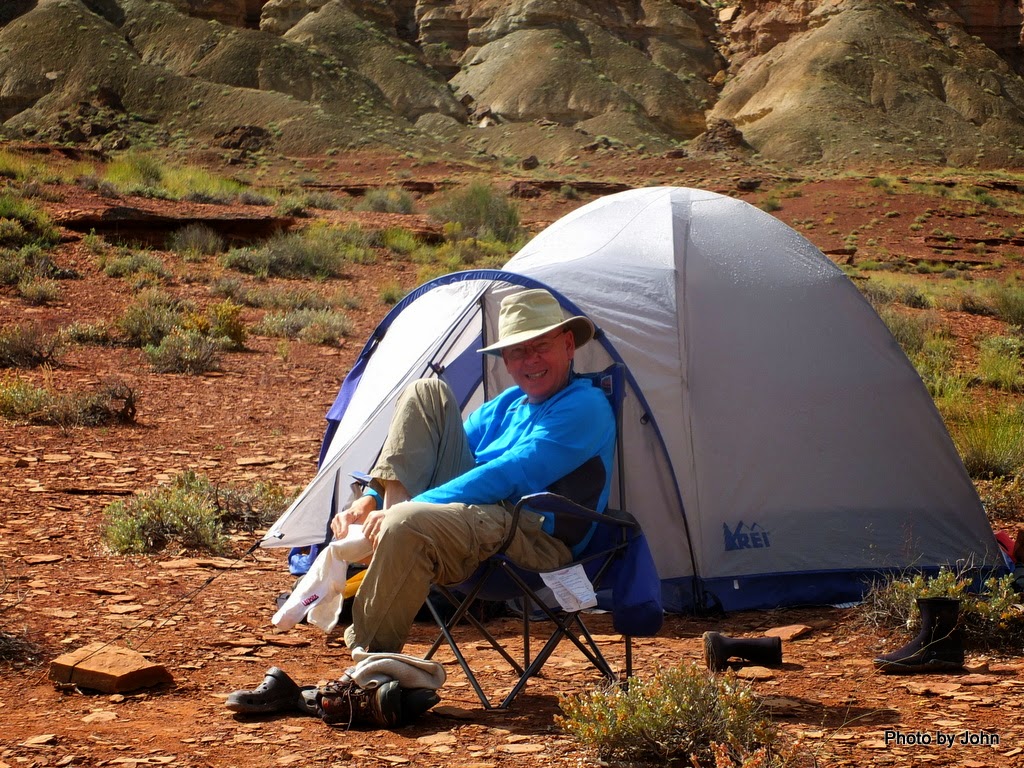 After yet another rain shower, folks starting donning their hiking boots in preparation for their exploration of the heights of Fort Bottom. 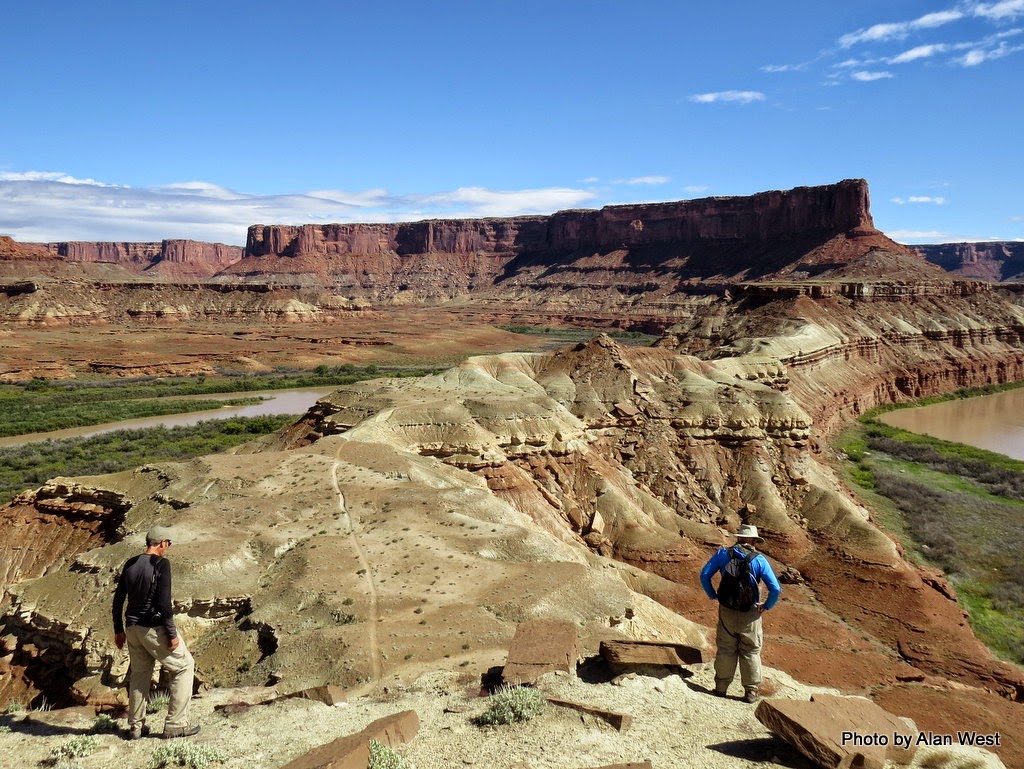 Three guys made it up to the plateau while the two gals with them decided height was an advantage to make the crux moves and they were somewhat height challenged. That's their report and they're sticking to it!

This view looks southeast with river mile 41 at the left edge of the picture and river mile 38.5 at the right edge. 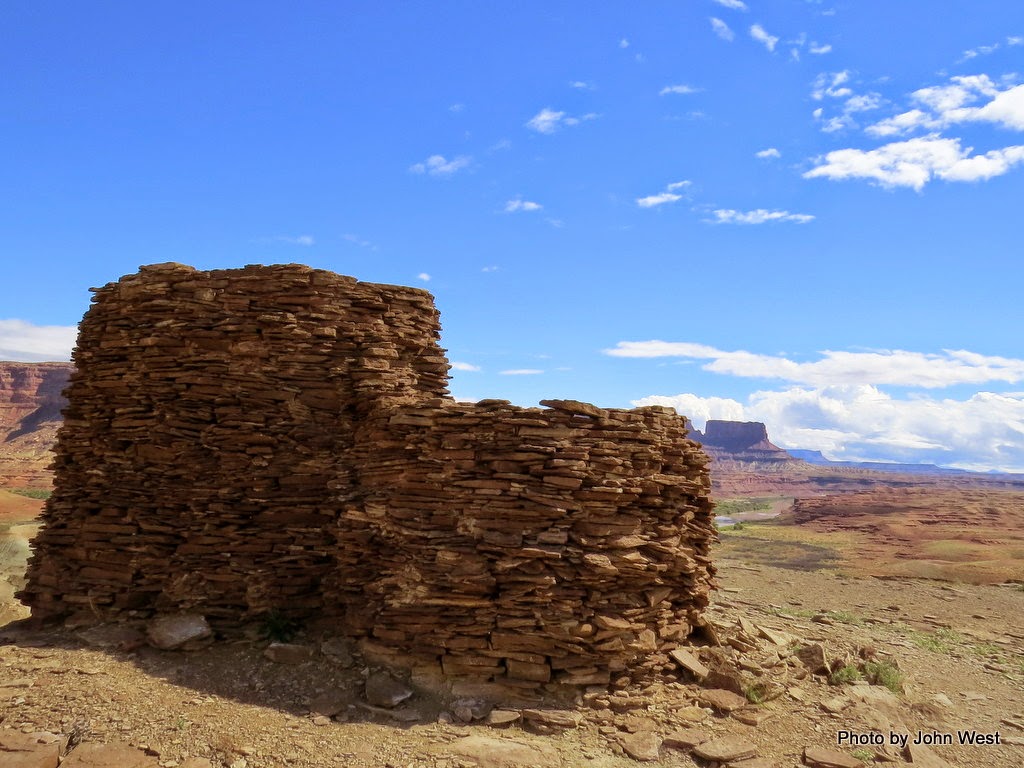 According to the National Park Service, Fort the Bottom Ruin was constructed roughly 1,000 years ago and "remains one of the more dramatic reminders of ancestral Puebloan culture along the Green River." 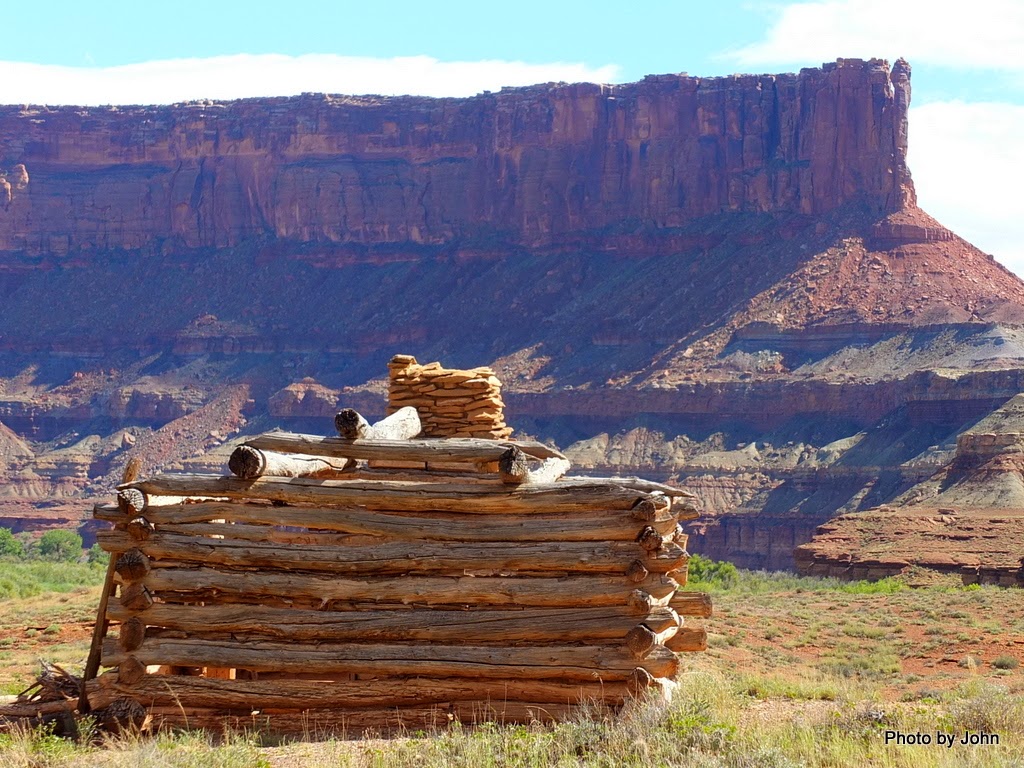 The "outlaw" cabin is easier to access, located on the lower mesa. It's seen notable deterioration in the past 15 years although the chimney and walls remain. While often referred to as the "outlaw cabin," it was apparently built by one of the early cattlemen in the area. 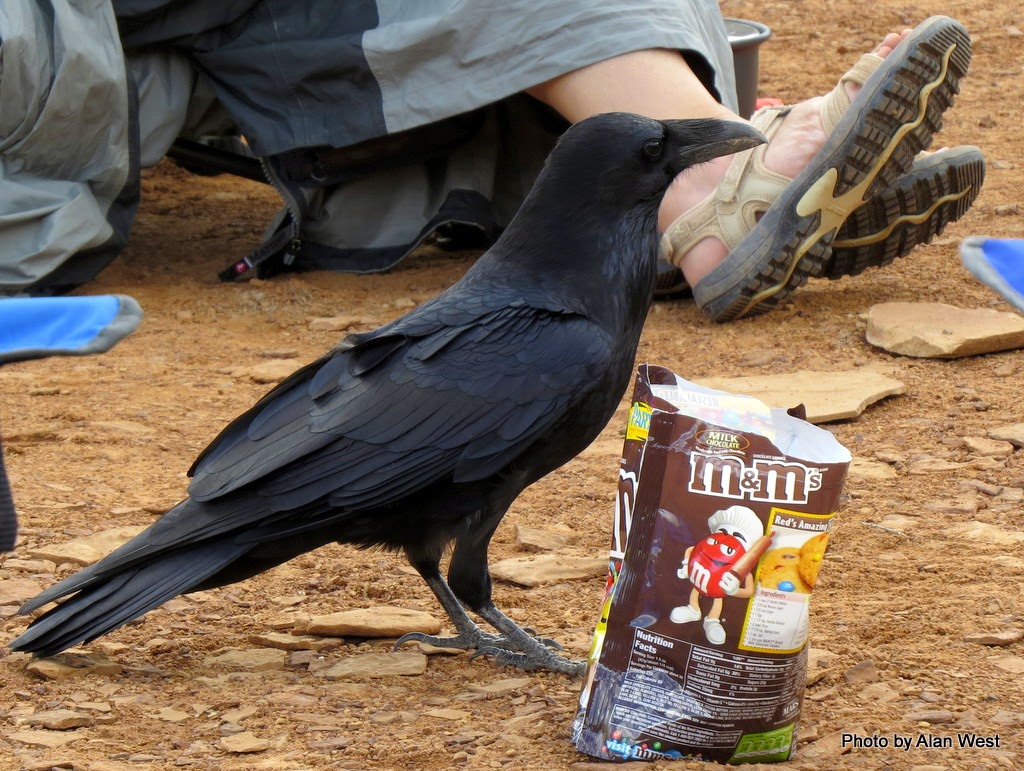 Afternoon entertainment was provided by a raven we named "Charlie" who showed real interest in the group, finally narrowing in on the large bag of M&Ms provided by the mother who had a strong need to feed everyone. ;-) Fortunately, "everyone" did not include two winged animals and Charlie remained without his share of the treats. 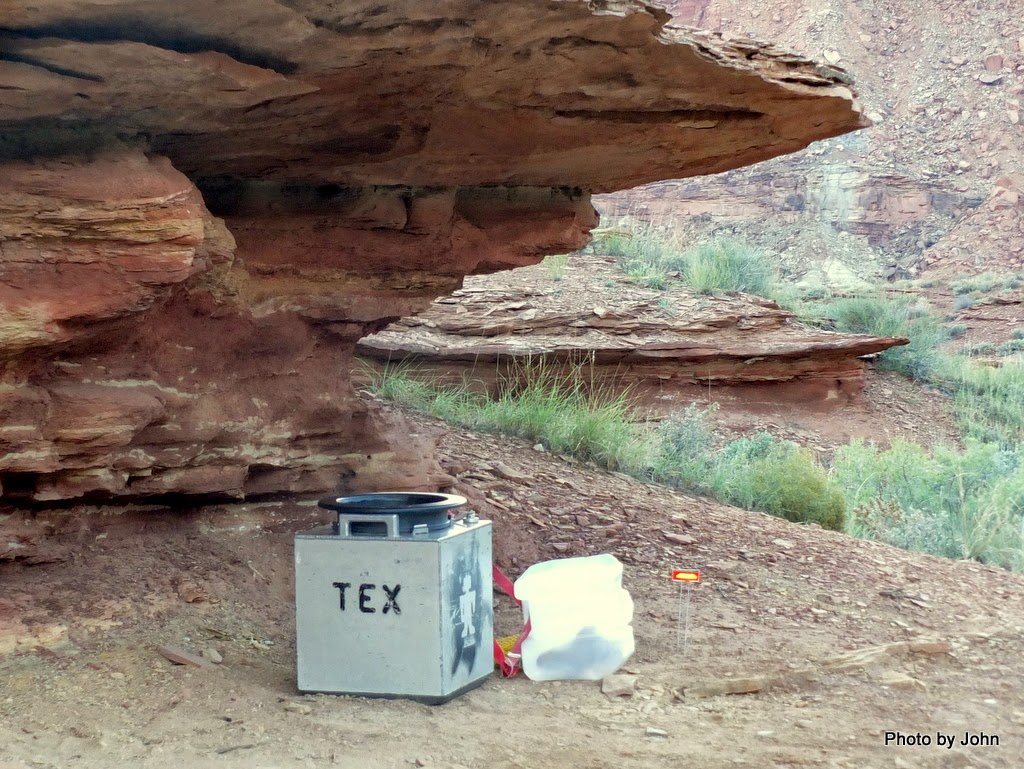 This camp had the best groover location. As usual it was out of view of camp, but this location sported a rock overhang to protect from rain. 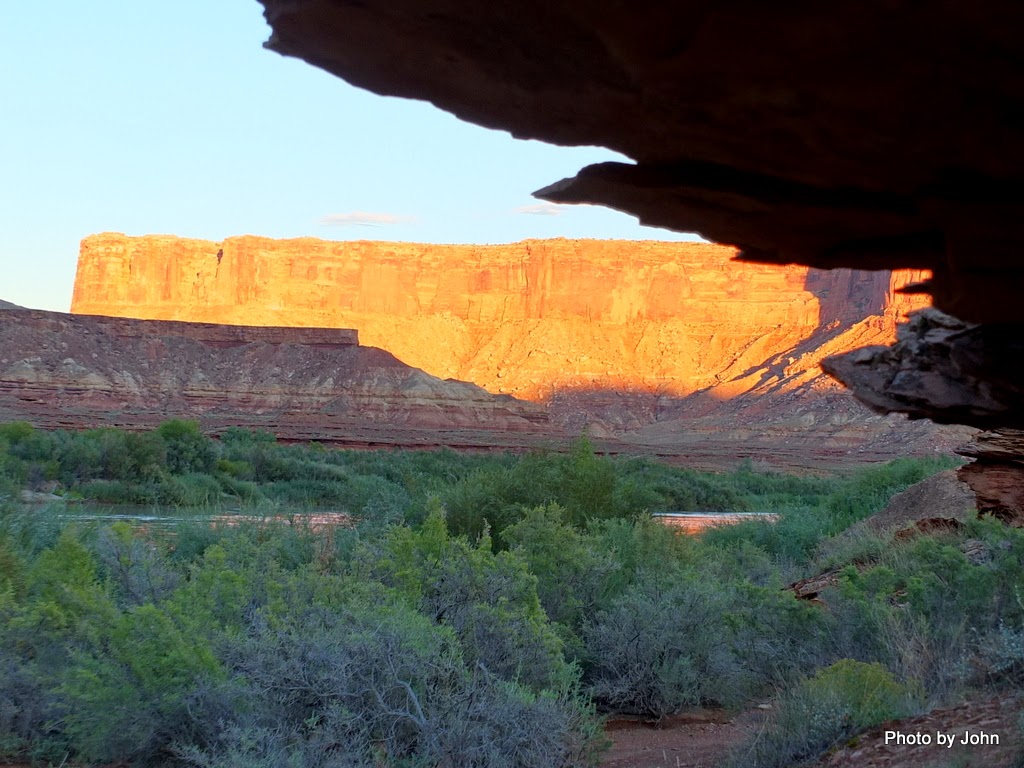 The best part, however, was the view from the groover looking back upriver, watching the setting sun reflecting on the cliffs of Big Horn Mesa. 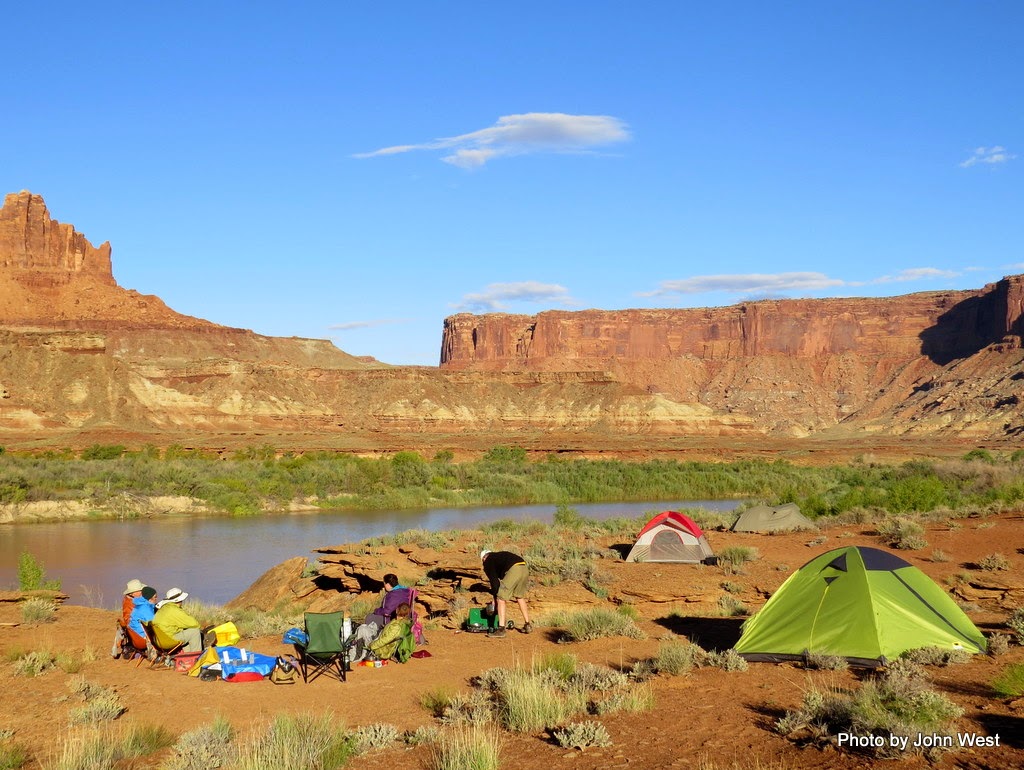 Once again, Beth struggled with downsizing her recipes to feed just two. In this case she fed six of us some wonderful beef stew. Word on the street is that her husband had to resort to using his Swiss Army knife to open cans since she brought the one and only can opener from her house with her on the trip. Guess I know what to get her for Christmas! 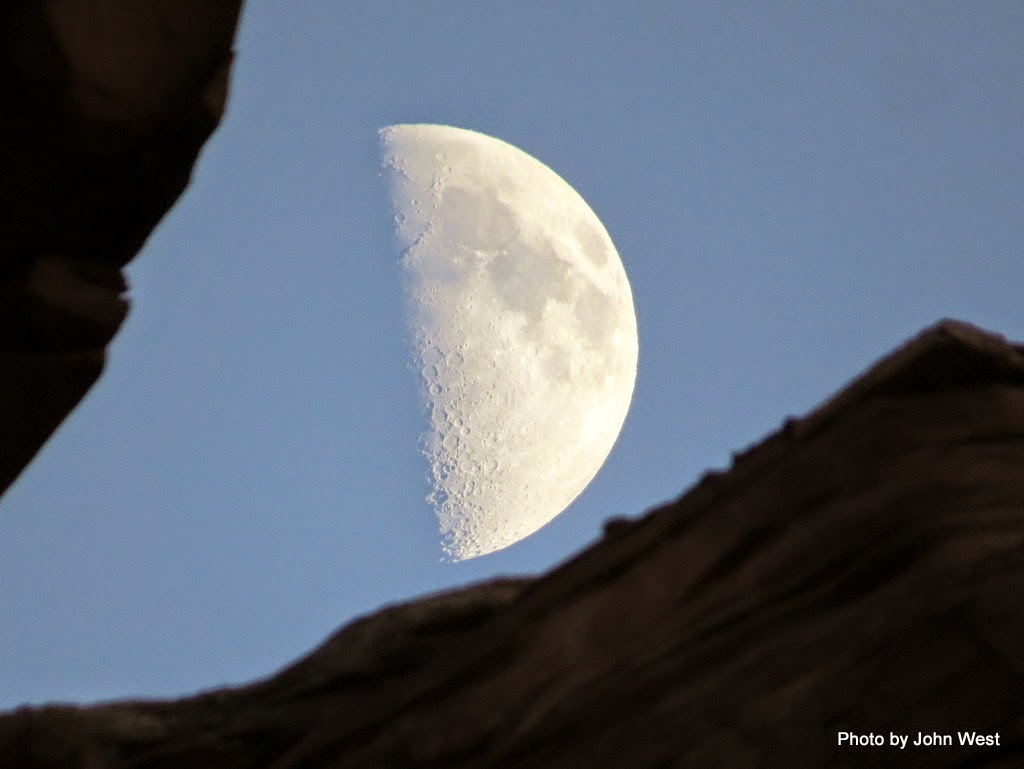 By the time the right side of the moon rose, the skies were clear and winds were calm with the forecast for our remaining days to be more of the same.

We saw one tandem canoe and three small rafts (the smallest a 9' oar rig) today. The canoe stopped by for a hike before continuing on to Tent Bottom.