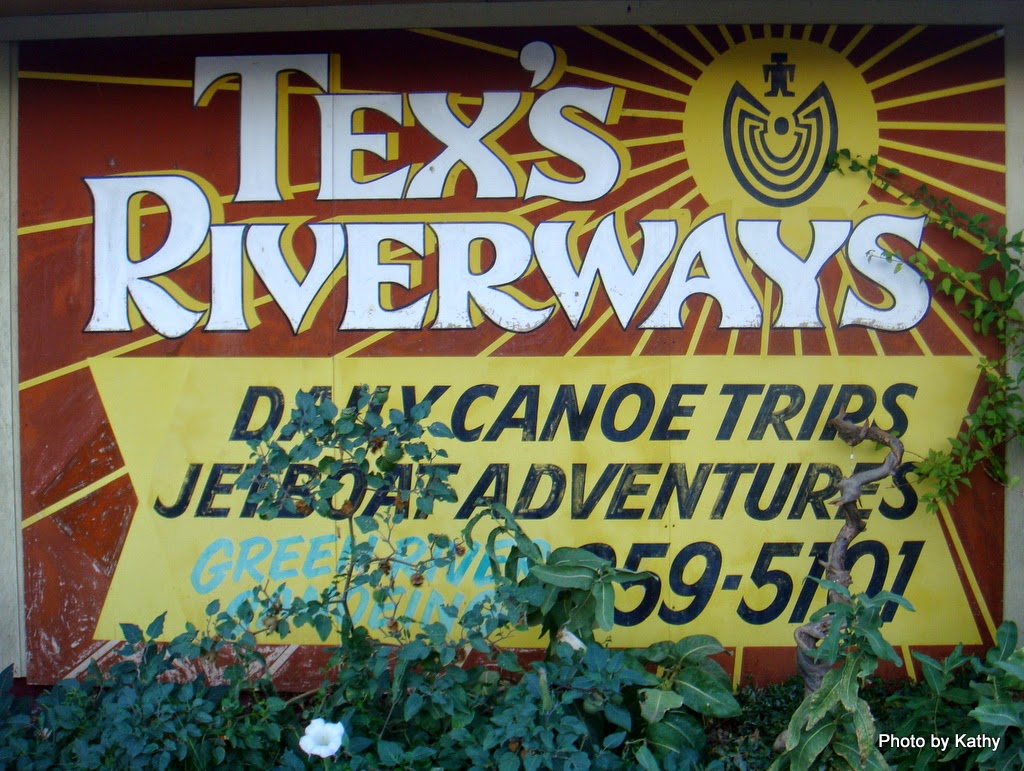 Thursday, September 25 - Just like previous years, our Green River trip started in the front parking lot of Tex's Riverways in Moab, Utah. They provide shuttle service to the launch sites and jet boat returns from the confluence of the Green and Colorado rivers. 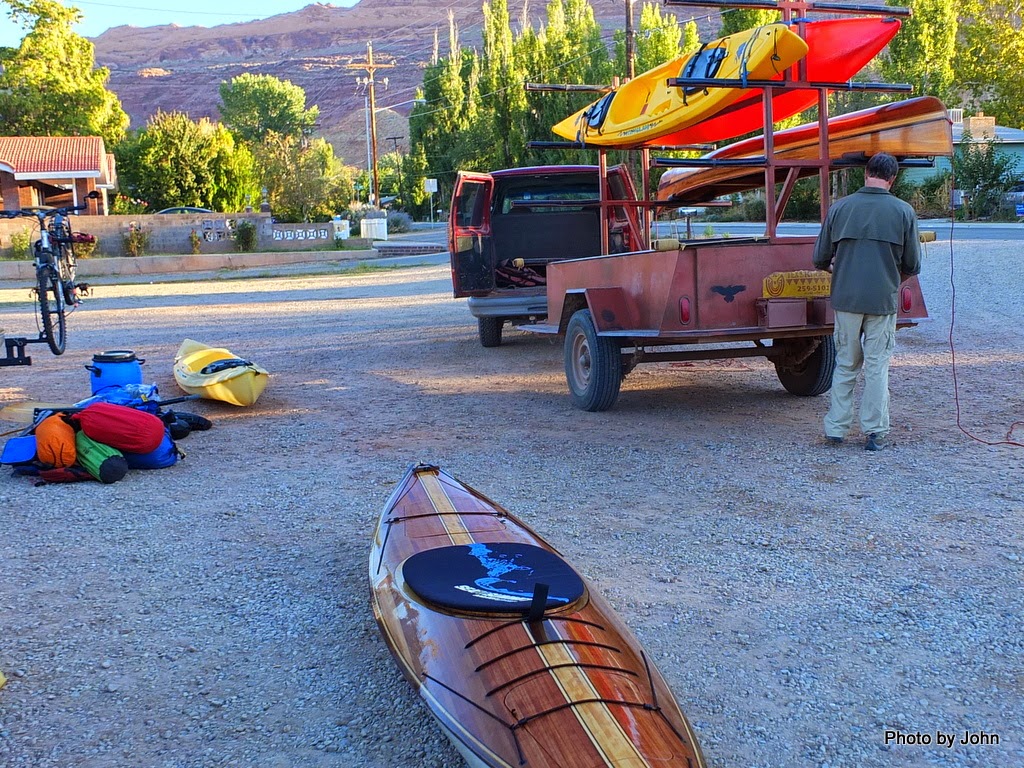 With just five of us for the shuttle to Ruby Ranch, it doesn't take too long to get the boats loaded. Our friend John and his brother Alan are both paddling Scupper Pro sit-on-top kayaks as is BJ. Kathy is taking Knot Too Shabby for it's first multi-day trip. I'll be paddling Knot Again, my solo canoe. 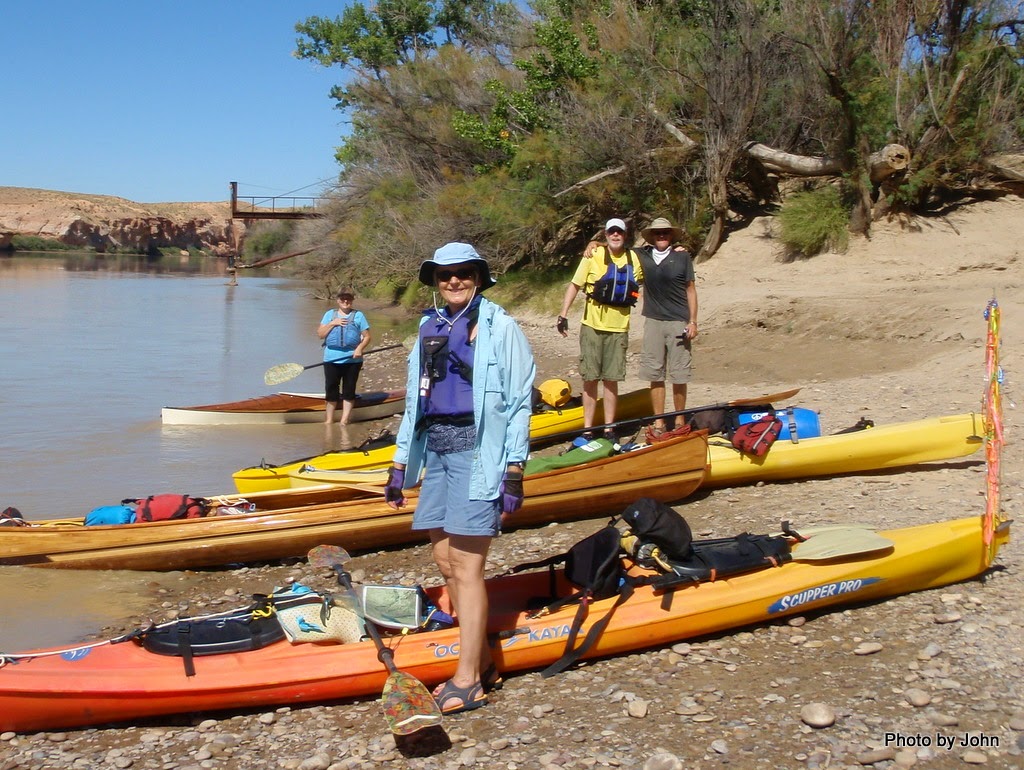 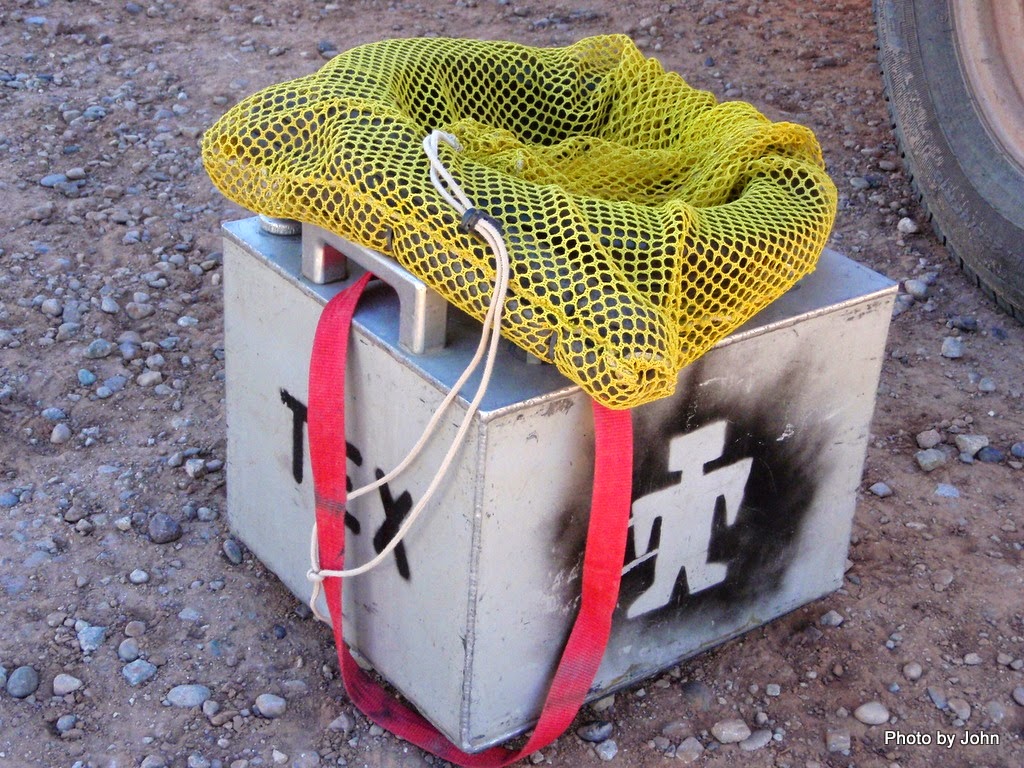 Recently, I was asked why I paddle a canoe. The simple answer is that the groover* doesn't fit in a kayak. 'Sides that, the canoe is more fun!

*On many rivers, large ammo boxes are used to haul out feces. Without a toilet seat, the ammo box leaves grooves in the back of your legs, thus the term groover. 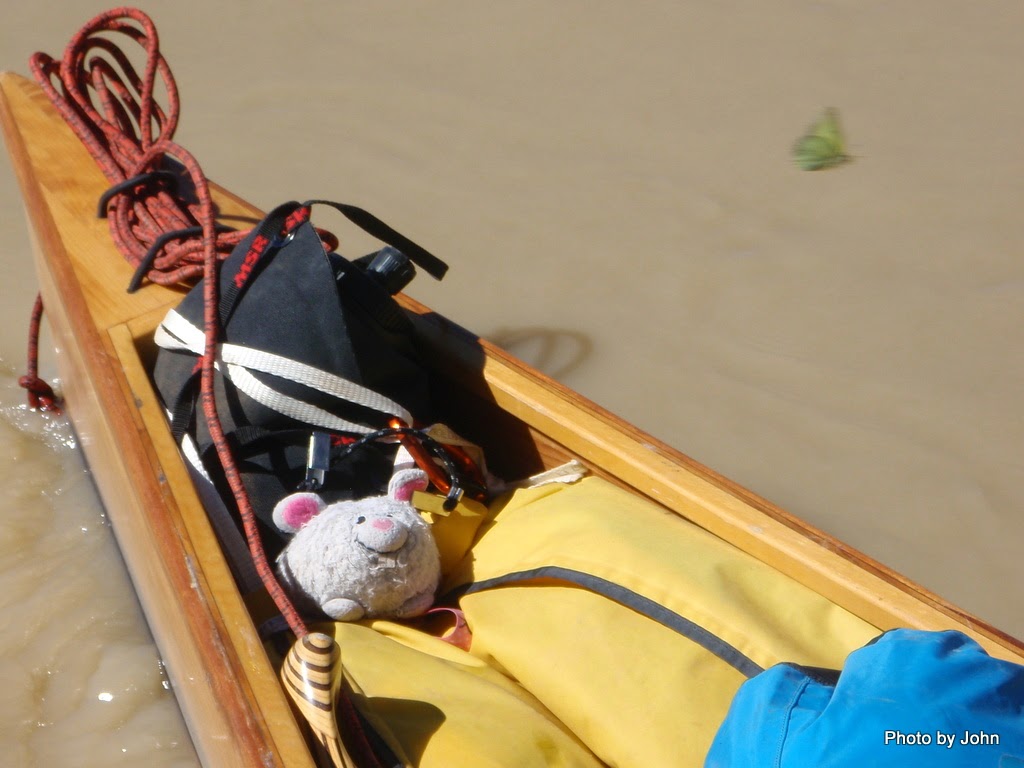 Squeak found a spot in the very front of the canoe, along with one of the 10 liter bags of drinking water, food for suppers, and a bag full of kitchen equipment. 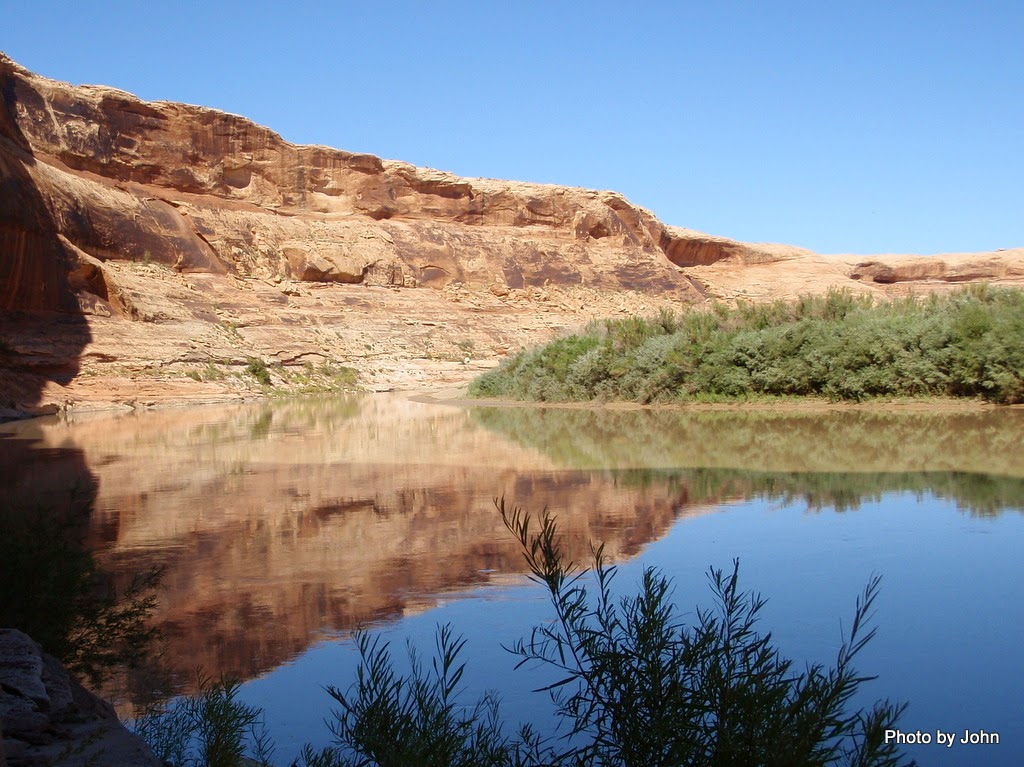 We'd hoped to spend our first night at Trin Alcove, but a group of 6 canoes from a university outdoor studies program were already there. We ate some lunch while enjoying the view and then headed on down river. 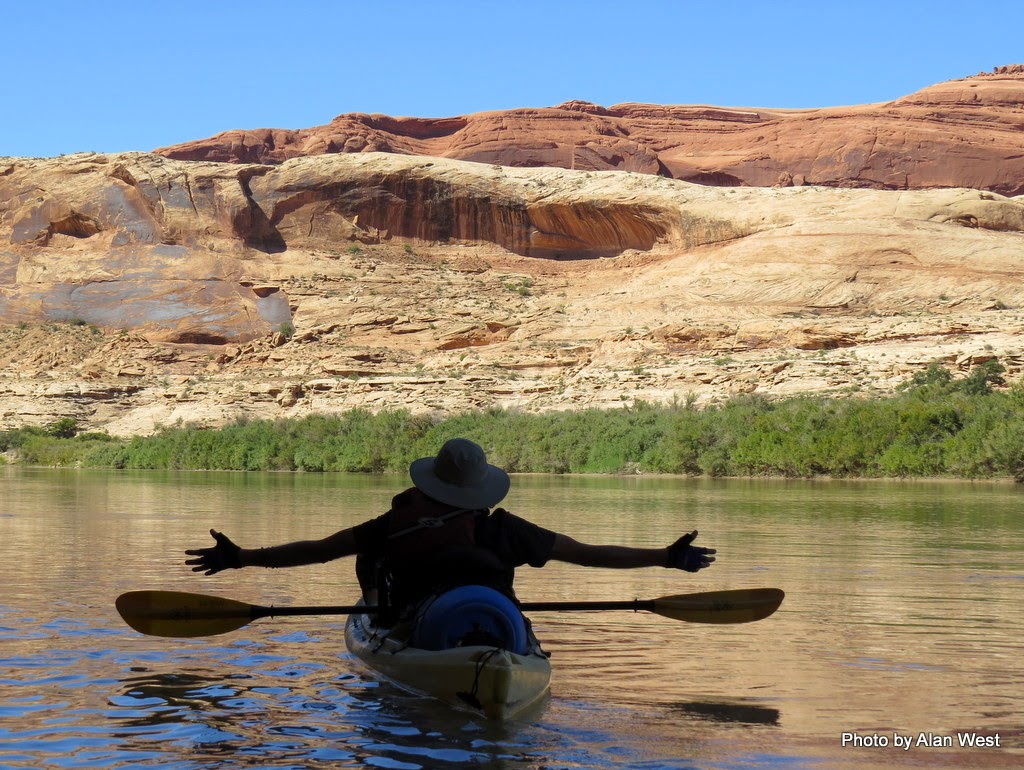 Alan caught this picture of his brother which pretty much summed up the day! The river was flowing 3000 cubic feet per second, and the weather was beautifully clear with light and variable breezes. Temperatures were in the mid 70's - pretty much perfect for paddling. We usually leverage sandbars for our overnight camps, but sandbars were very rare this year. We did find a smaller than normal one in the corner near river mile 86 that had enough elevation to be dry on top which became our home for the night.

BJ was quite amazed to discover a weak Verizon cell signal here. Since my phone was in the truck, it didn't bother me. ;-) 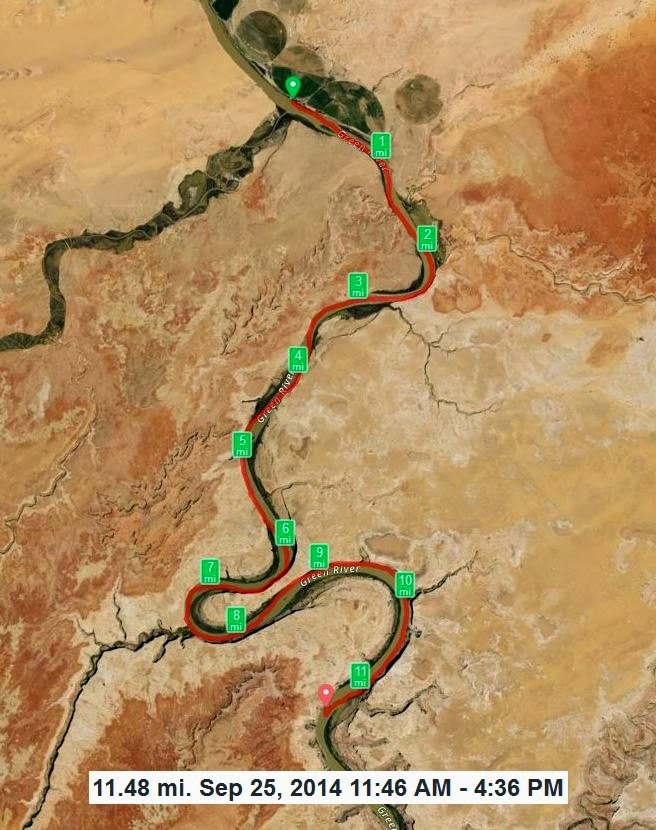 Alan had an app on his iPhone (Runkeeper) that he used to create our track each day. Mileage varies a bit because we crossed the river many times to stay in the main channel. Ruby Ranch is across from the mouth of the San Rafael river where the irrigation rings show on the satellite image.
Posted by Just Finding Our Way at 7:17 PM