Monday, September 29 - It rained until midnight last night, but the day dawned with no wind or rain. It was clear the river was on the rise - the three plastic kayaks were all floating and the sandbar across the river was gone except for a ripple. We'd agreed to get up early so that we could haul our gear down off the shelf and get loaded out expeditiously. 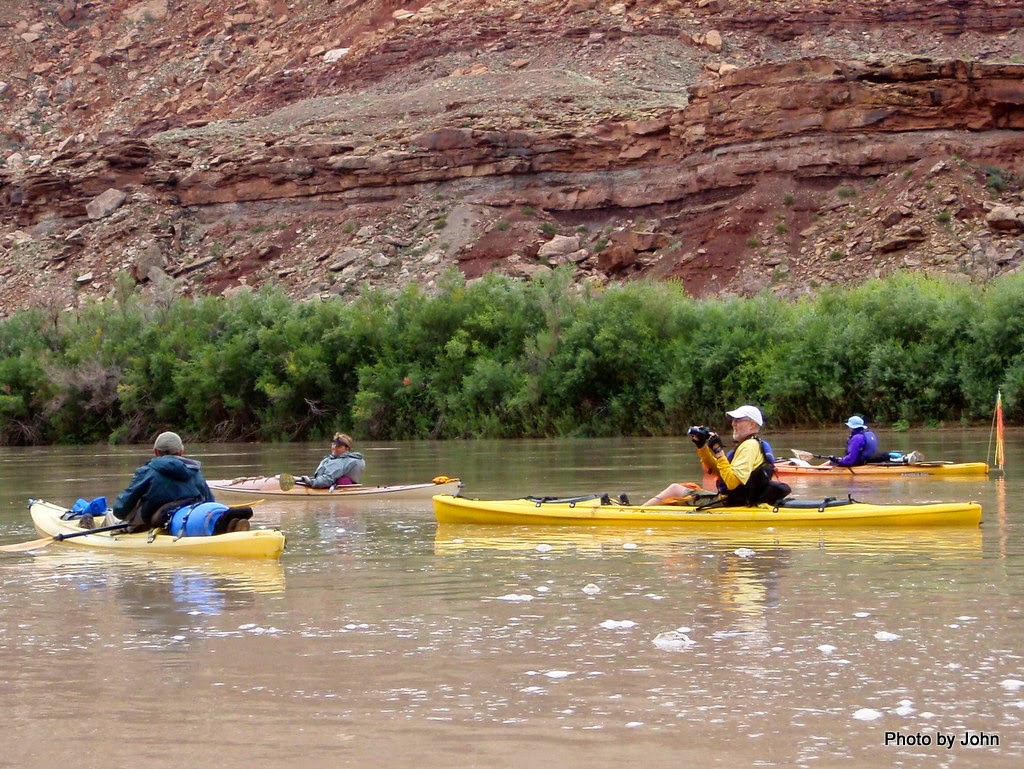 The day was cool enough that most were wearing their rain jackets over their PFDs. There was a lot of flotsam on the river which made it easy to follow the river current. 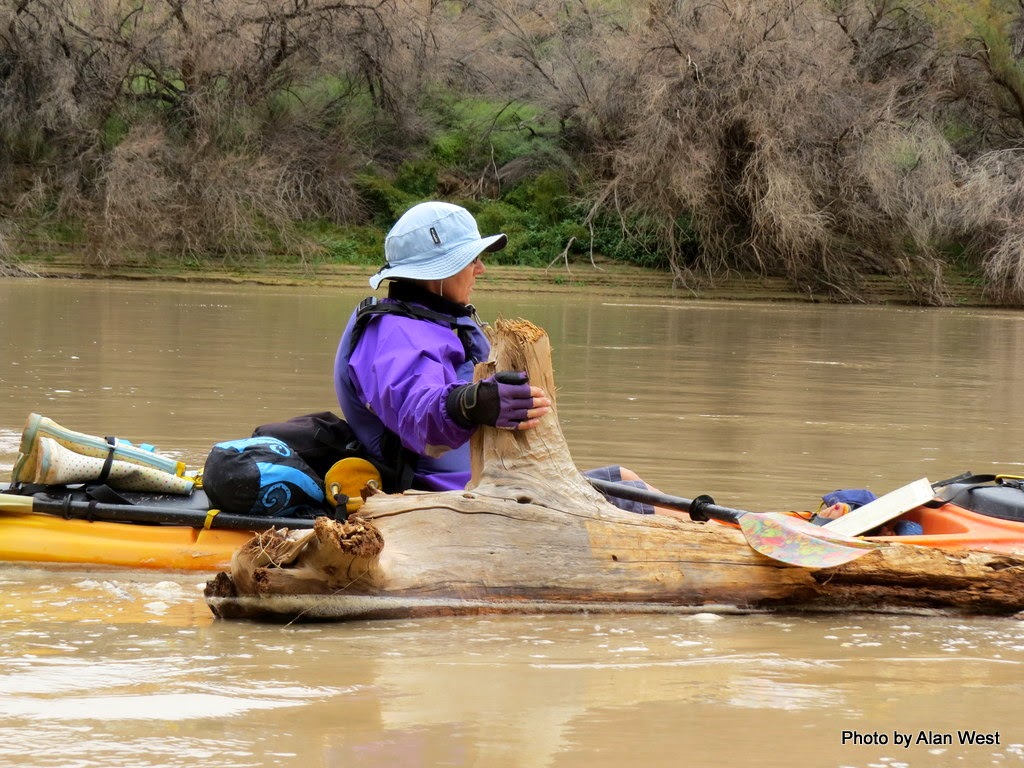 Some of the stuff floating down the river was pretty big! Kathy and I started chatting about a "log" that we could see in the distance. As we got closer, it took on color and shape, 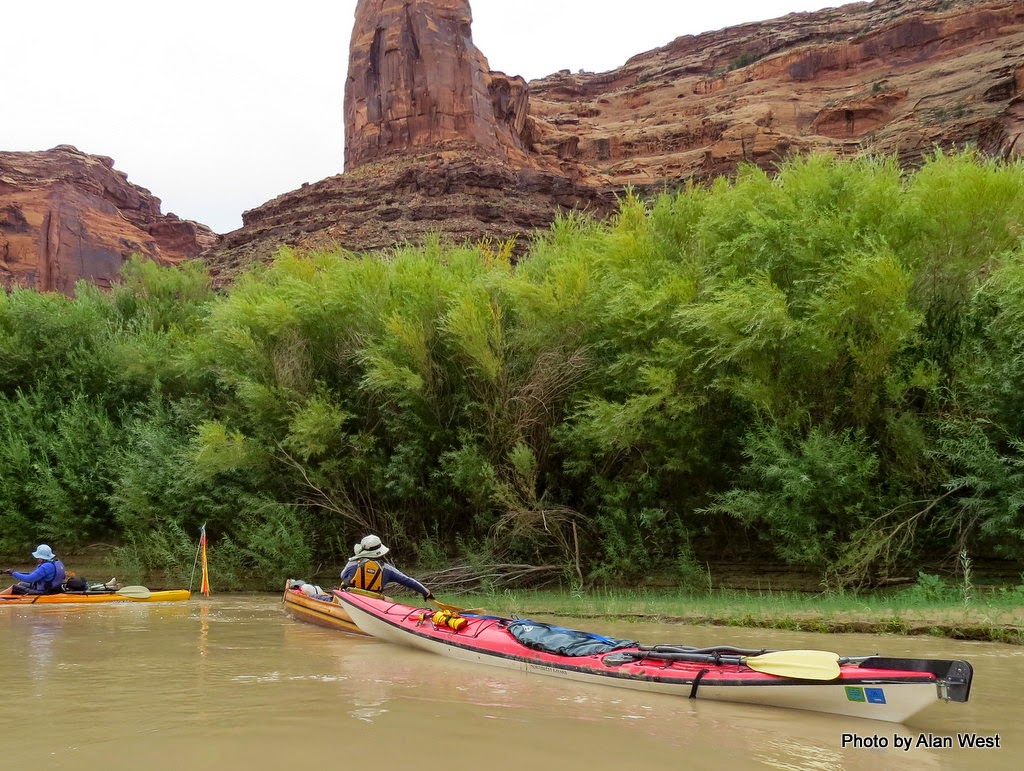 making it clear that someone had lost a sea kayak. Two paddles tied on the back deck and a cockpit cover secured, but no sign that it had been tied to anything on shore. It was nice to have my PFD with a rescue tether which made it easier to tow the boat into an eddy. 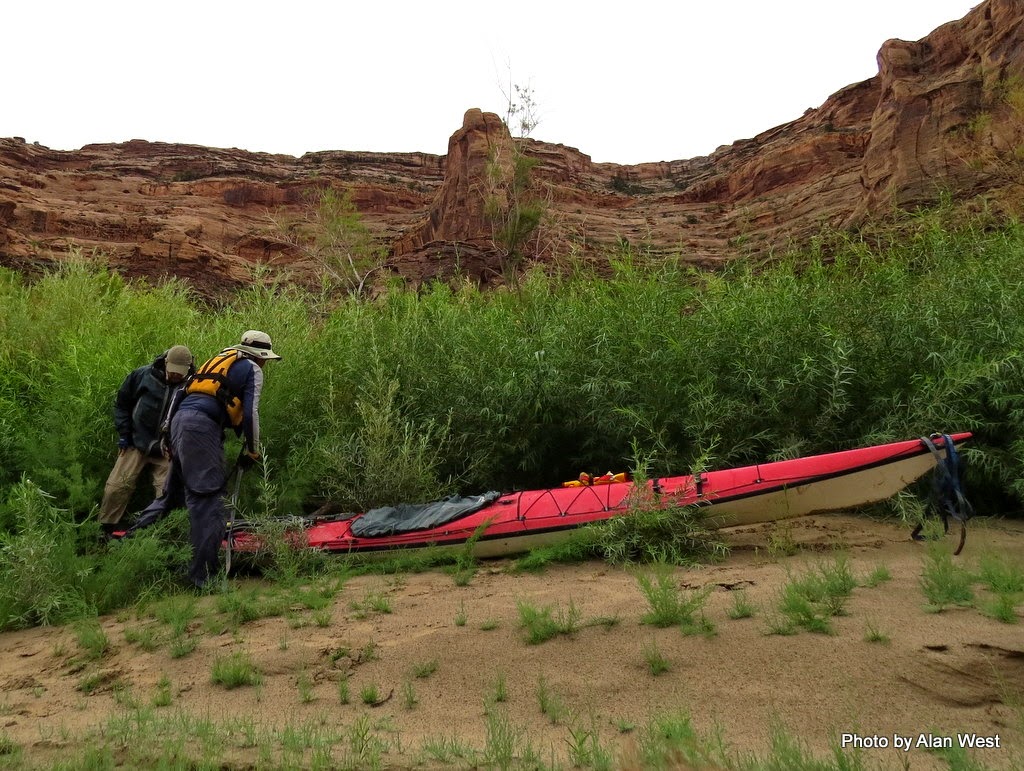 John gave me a hand to move the boat to the top of a sand bank where we tied bow and stern to tammies. Should be secure enough.

As we continued down river, we continued to comment about the poor condition of the remaining sandbars. It was clear that the sandbars hadn't built this past spring and the few remaining were much smaller and in many cases, very muddy. 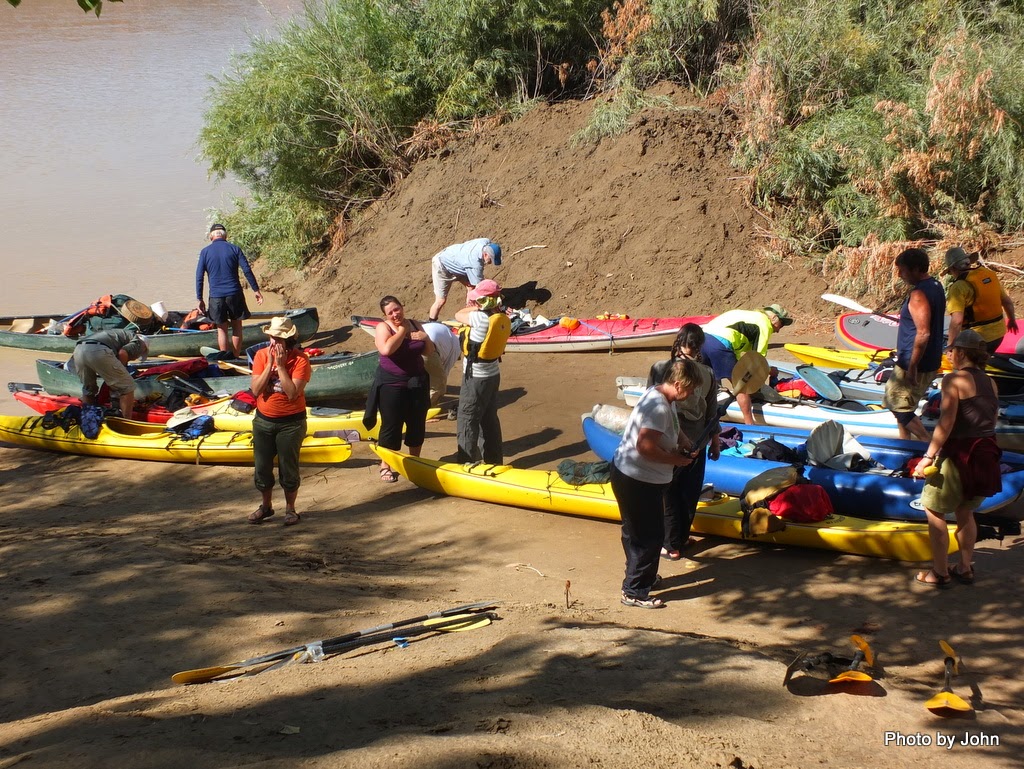 When we got to the Mineral Bottom boat ramp (the only access point south of Ruby Ranch) it was jam packed with kayakers who were just standing around. Turns out, a large group was sitting in position to launch but were waiting for the other shuttle company to return from Moab with the groover that they had forgotten. Meanwhile, they were making it tough for us to get off the water. 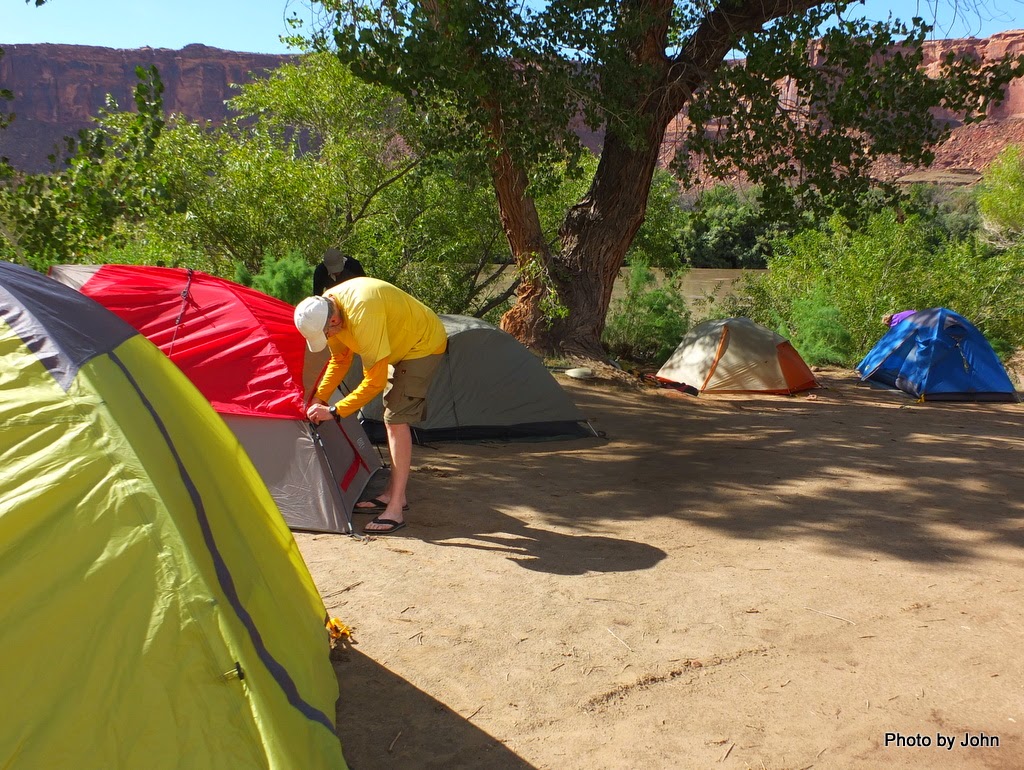 We eventually got a narrow section of ramp so that we could land the boats one at a time and carry them up to the top of the ramp. We set up our tents just above the ramp, 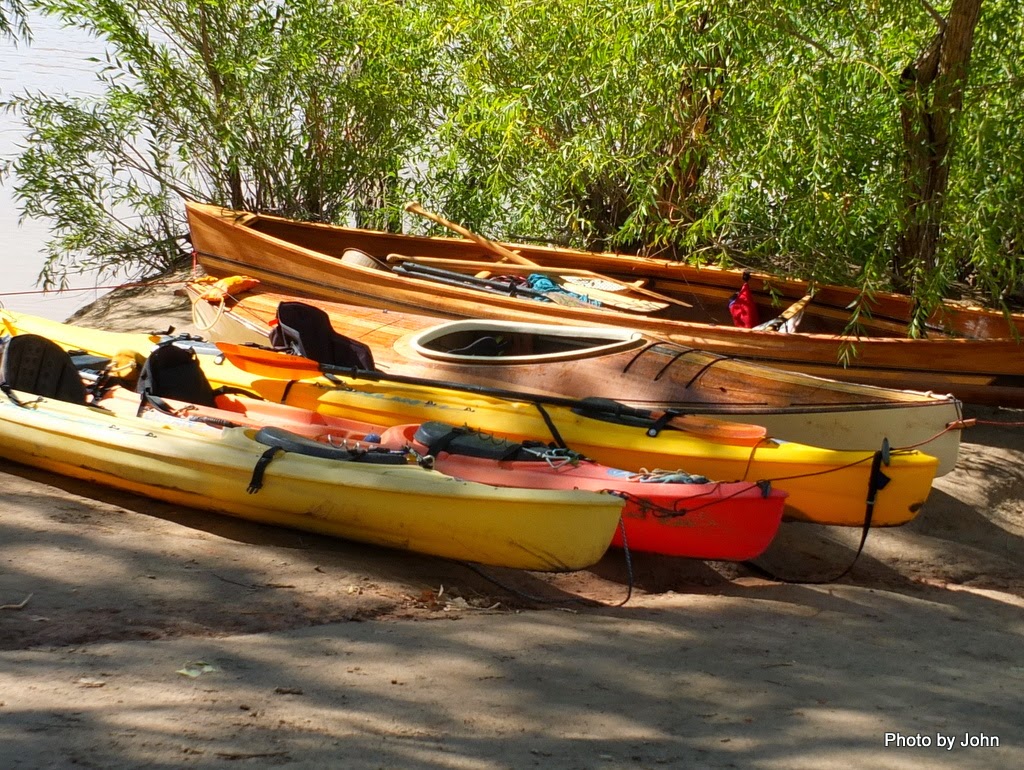 and tied off our boats near the ramp but out of the way. Meanwhile, the kayak we'd rescued showed up with a grateful paddler. As I understand it, he was part of one of three groups who had stayed on the sandbar at River Mile 72.8 the night before. Apparently, the sandbar collapsed during the night where his kayak was sitting. He got a ride downstream on a raft that was also camping at that sandbar. 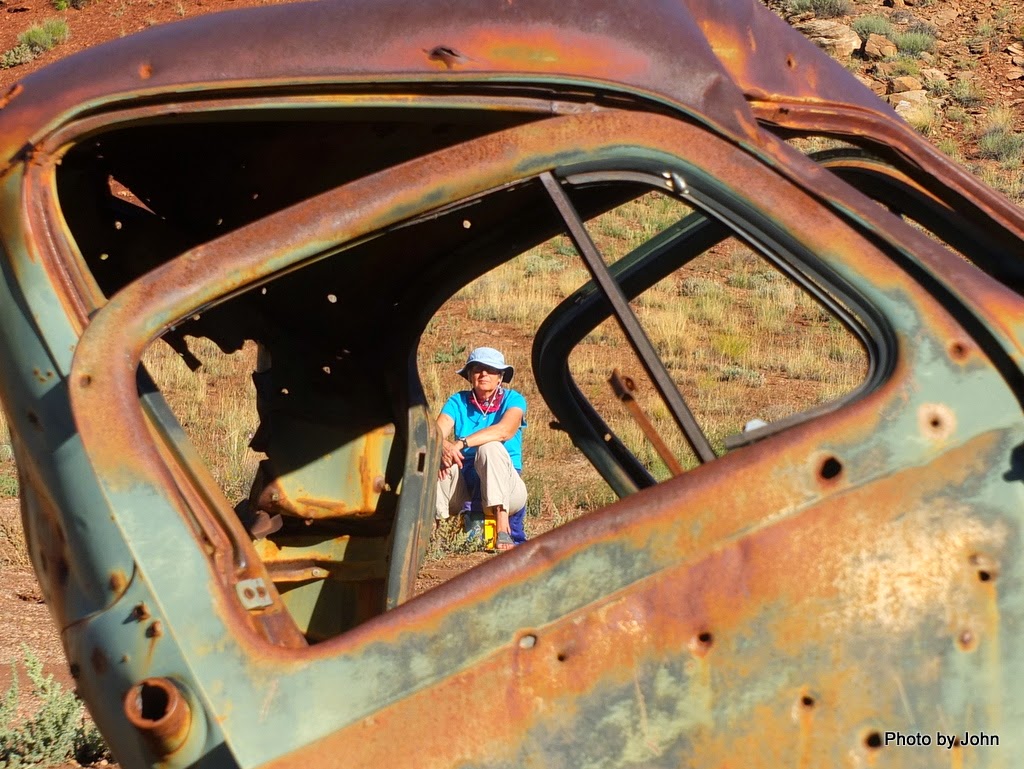 Given the nice weather and time, BJ, Alan, and I walked up the road past the airstrip. I was looking for mine remains or rust, and found both! It was hard to tell, but I'm thinking this was a mid 50's Ford truck that may have rolled down the hill from the mine. While the guys explored, BJ enjoyed the sun. 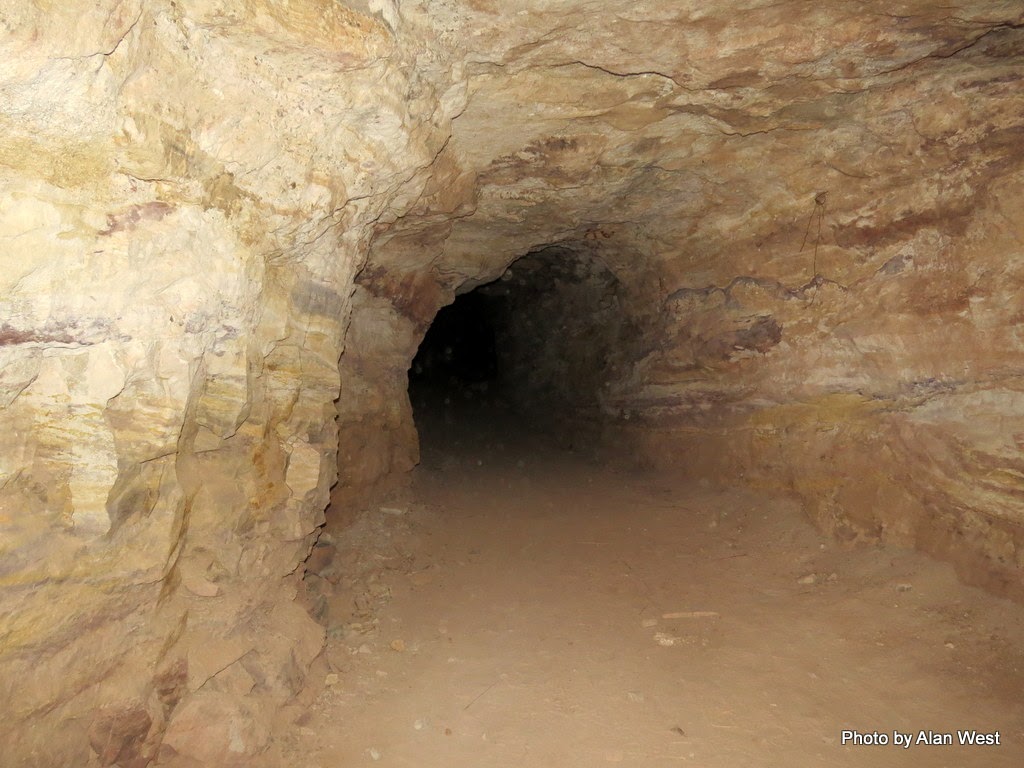 There were two mine shafts at this location that appeared to be in good shape, but without a flashlight, we couldn't explore. Given the history of the area, I assume these were uranium mines. 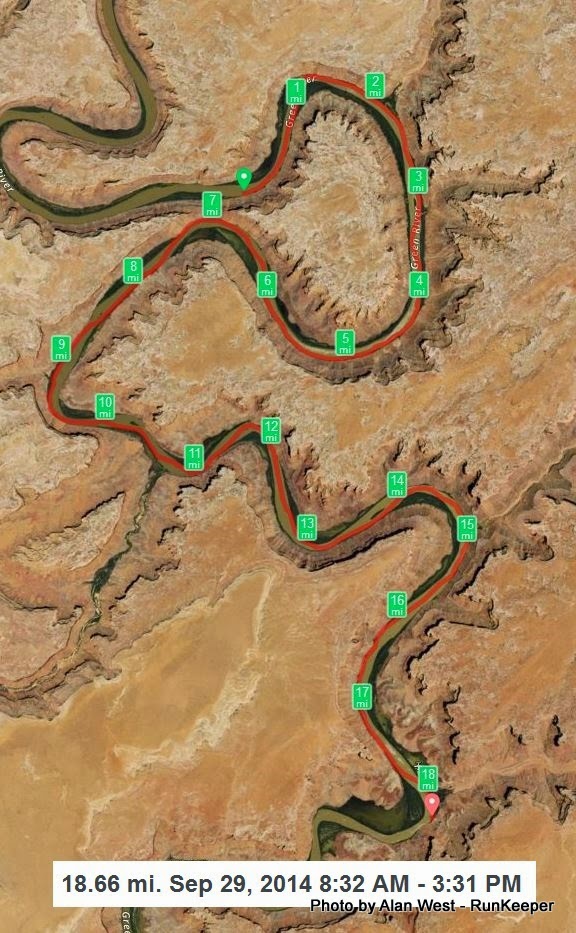 We traveled 17.4 river miles today with the river flowing about 6500 cfs. The weather started out calm and cool, with some breezes as we approached noon. The surprise was the hail that hit us while we were impatiently waiting for 45 minutes for folks to clear enough ramp so that we could land. 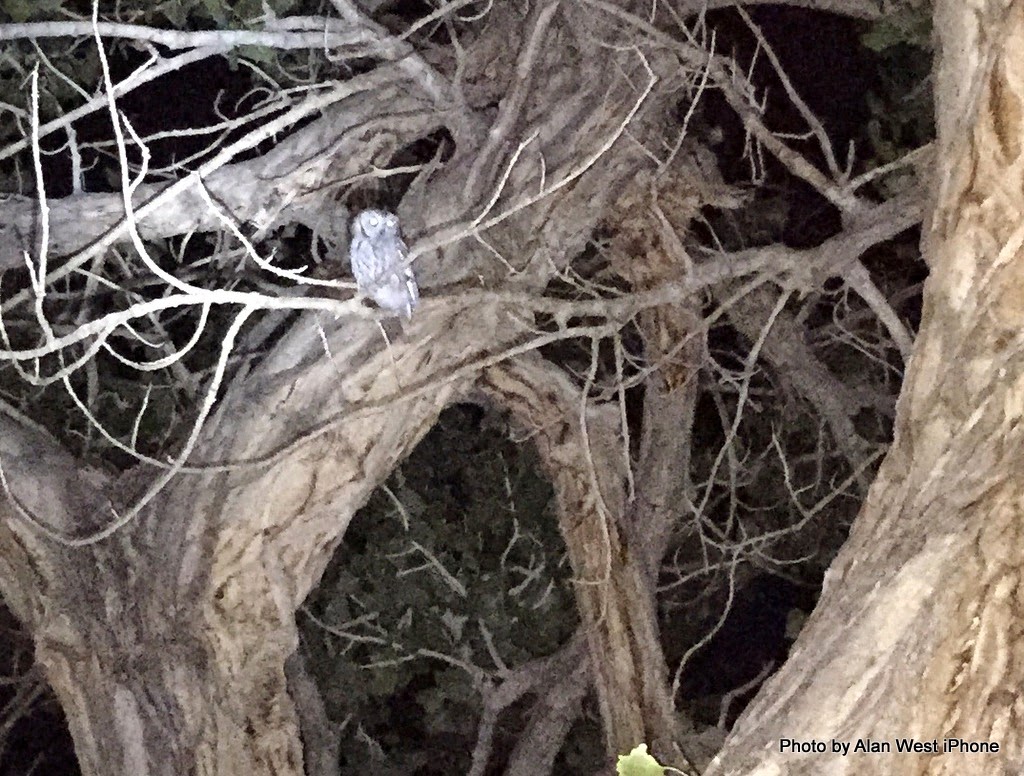 The other surprise of the day was the identification of the noisy culprit that we had heard but not seen at Bowknot Bend. Alan finally spotted it in the cottonwood tree where we were camping and was able to get a picture using his iPhone and flashlight. Initially they thought it was a type of pygmy owl that was well out of it's range but it turned out to be a Western Screech Owl. It was a life bird for Alan. Both brothers are serious birders.
Posted by Just Finding Our Way at 2:30 PM