When the territory of Arizona was created, two sections of land were set aside in each township towards the funding of schools. When Arizona became a state, two more sections in each township were added to the trust. There is now approximately 9.3 million acres in the state that are managed as State Trust Lands to provide funding primarily for schools. Total income from the trust was over $300 million in 2013.

As the Arizona State Land Department 2013-2014 Annual Report states, "Since the ASLD’s inception, its mission has been to manage the Land Trust and to maximize its revenues for the beneficiaries. All uses of the land must benefit the Trust, a fact that distinguishes it from the way public land, such as parks or national forests, may be used. While public use of Trust land is not prohibited, it is regulated to ensure protection of the land and compensation to the beneficiaries for its use." That second sentence has major implications for RVers and others that desire to use the land for recreation (Emphasis added). Each individual (or family) must have a current, signed Recreation Permit with them any time they are on State Trust Land (STL.) That annual permit also allows for up to 14 days camping (annually) on STL. 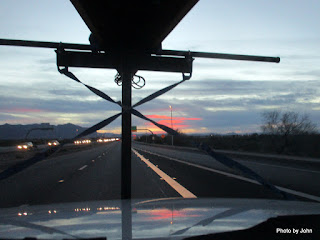 For some time, geocaching was illegal on STL. They recently changed that ruling when they realized the geocachers provide significant support by reducing the littering problem. To show our thanks, friends organized an early morning Cache In Trash Out event.

I headed out as the sun started to rise with the canoe on board since I was heading to the lake afterwards. 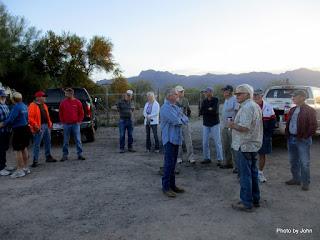 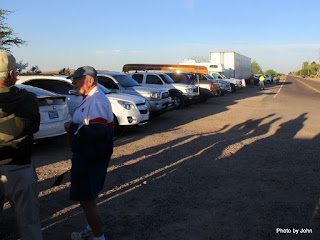 while the parking filled up. We all grabbed a plastic bag or two and headed out looking under and around every tree and bush for trash. At first glance I thought the area was pretty clean but by the time I got 1/2 mile out my bag was getting full, just as I spotted an old wheel & tire. It took a while to get that lopsided tire and my bag of trash back to the entrance. 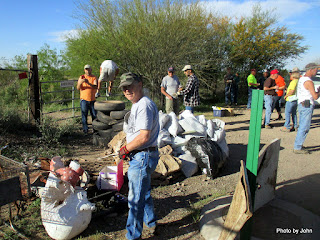 I was surprised at the number of tires that were found and the pile of trash. Later, I heard that there were three truckloads of trash collected in a couple hours that morning.

If you're going to use STL, please don't trash the place, and do a bit of cleanup while you're out there.
Posted by Just Finding Our Way at 2:30 PM