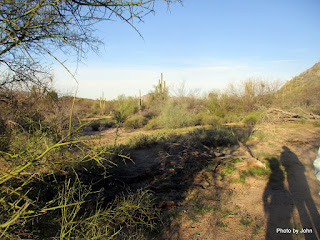 For months, BJ & I have been talking about a series of caches just north of the Salt River between Water Users and the Blue Point Bridge. We finally decided the weather and our schedules were right for a bit of wandering. 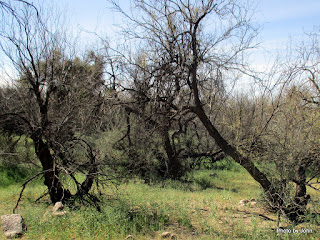 We parked the truck at the Blue Point Bridge parking lot and headed east. Part of the area is relatively dense mesquite which wasn't high on our list but it quickly became apparent that we could skirt that area. 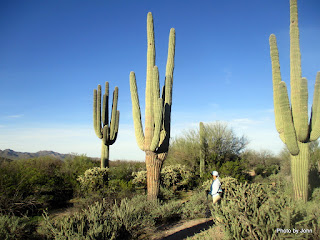 We wandered east into the rising sun, enjoying the saguaro forest and a wide trail that had been created by the feral horses that wander through the area. I was a bit surprised to only see one horse all morning - they must have been closer to the river. 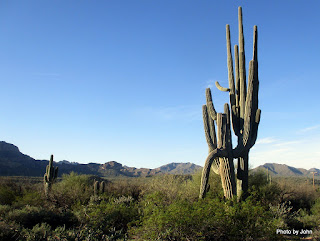 I always enjoy saguaro. Every one is different. Some can't make up their mind. 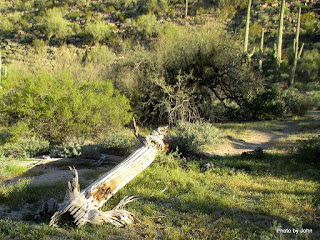 And a few have fallen, leaving just their skeleton to reflect their former glory. 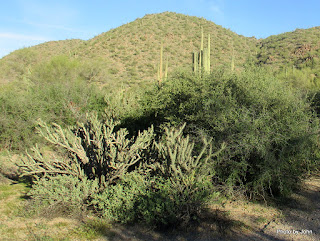 The palo verde and ironwood trees were robust along with jojoba, creosote, and multiple types of cactus. The trail was reasonably level and sandy smooth, sandwiched between the lowland growth and the rocky hills immediately north of the trail. 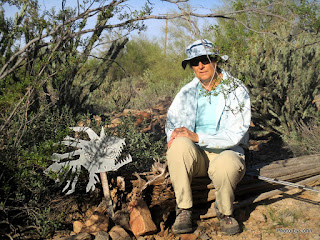 We walked out to the east end of the section and started locating caches as we returned to the west. Many of the caches on this day were put in by Team Evil Fish including this one that was complete with a trail sign. 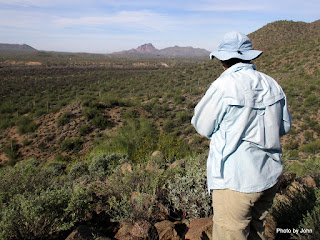 A couple of the caches included scrambles up the hills which left us with great views. Both of us enjoyed the morning including 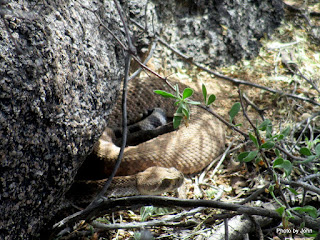 one cache that was poorly guarded by a fine looking rattle snake. He or she didn't seem concerned when I grabbed the cache on the other side of the rock. We finished up the series and headed home for a bite of lunch and a chance to log our finds. Just as I finished logging, e-mails started popping up with newly published caches, including two more in the series we'd just finished. 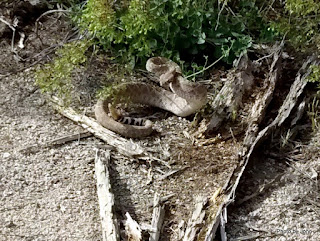 BJ stayed home while I headed back out in the hopes of getting a First to Find. Met two other cachers at the trailhead and headed off as a team to visit the new cache. On the way back, we met another snake who wasn't as laid back as the one in the morning. A two snake day and a First to Find - can't ask for more.
Posted by Just Finding Our Way at 2:30 PM