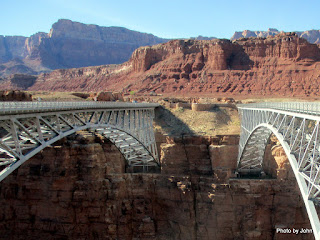 I have two friends that were launching on Colorado River trips through the Grand Canyon within a couple days of one another. That was all the excuse I needed to hook up the trailer and head for Lees Ferry. I was going to stop at the Navajo Bridge on my way, but the parking and interpretive center on the west bank was closed so I dropped the trailer at the campground and came back to the "market" on the east bank. 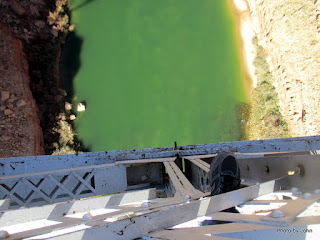 I did some rock climbing in high school and heights have never seriously bothered me. In fact, I enjoyed the view from the bridge down to the river over 460 feet below. 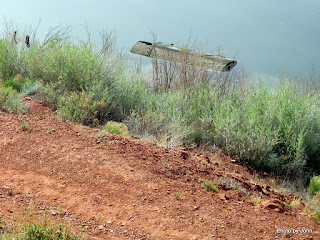 In addition to the Lee family, Charles Spencer figures large in the history of Lees Ferry. He was a creative engineer who put together enough financing in the very early 1900's to try some gold mining near Lees Ferry. A big, land based steam boiler, a steam driven paddle wheeler now sunk at the river's edge, 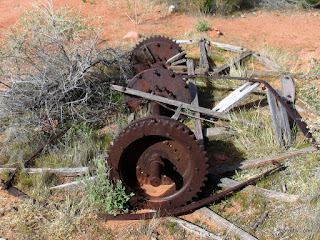 and other mechanical equipment and buildings remain as a reminder of his big dreams. 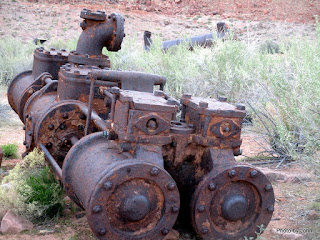 They discovered a seam of coal about 30 miles up river that they intended to use to power the boilers. The investors wanted to use the paddle wheeler to move barges of coal but it was under-powered and couldn't make it upriver. 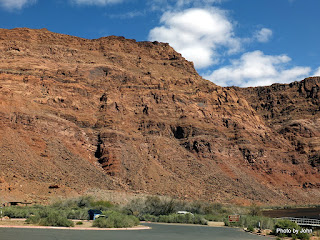 Instead, in 1910, they constructed a trail up the cliffs so that they could use mules to haul coal overland from the coal mine site. I've stood at the bottom several times trying to pick out the route of the trail.

This time, I wanted to hike the trail as a way to access a cache about a mile northwest on the rim of the canyon. Instead of using 4WD, I was planning a 6 mile R/T hike to get there. 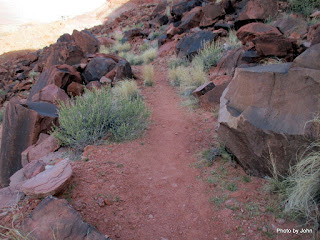 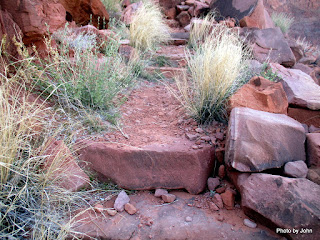 There are quite a few stone steps in the lower portion of the trail and I was pleased with what I was seeing. 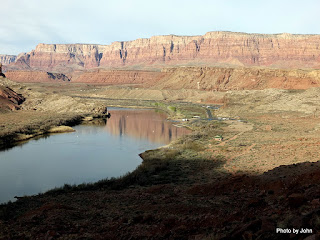 With a bit of elevation, the views downstream to the boat launch (center of the frame) and the Vermilion Cliffs were pretty impressive. 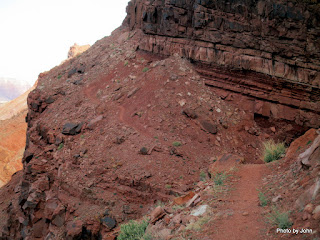 As I continued up, the trail got more exposed. If you click on the picture you'll get a larger version (as always) that will help you pick out the trail across the talus slope. I eyeballed that one and decided to keep going but put the camera away. A bit further, the trail got VERY narrow with 500' of vertical drop. It was at that point that I decided I didn't really need to visit Lonley Dell Overlook [sp]. 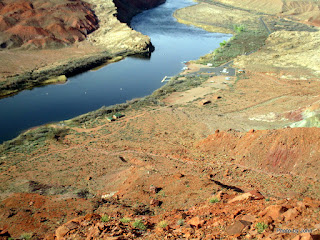 Turns out, heights do bother me when the trail gets so narrow that you can't even use one trekking pole! It was fun while it lasted! 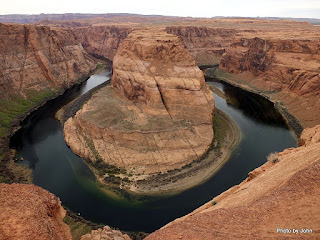 With lots more time than I expected on my hands, I drove around to Page to visit the Horseshoe Bend overlook. I've done this section of the river as an overnight kayak trip, but I'd never stopped at the overlook before. Turns out the height there didn't bother me - I think because there was always space to step away from the edge.

In any case, the day was lots of fun.
Posted by Just Finding Our Way at 2:30 PM