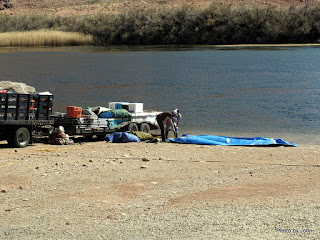 The real reason I was at Lee's Ferry was to see a couple great river-rat friends off on their trips through the Grand Canyon. Izzy (from my GC trip a couple years ago) was River Lead for a group of folks, primarily from the Las Vegas area. They leveraged Moenkopi Riverworks to provide rafts, shuttle, kitchen equipment, and food organization. 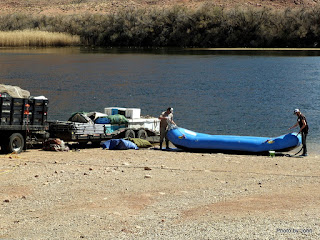 The Moenkopi truck and trailer showed up with a couple guys who immediately got started unrolling and inflating the 18' rafts that would be their homes for the next 25 days or so. 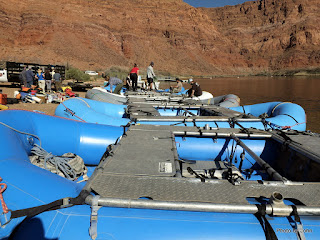 About the time the crew got the rafts inflated, the shuttle bus pulled up with all of the trip participants 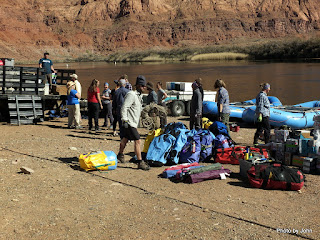 who immediately formed a bucket brigade to unload the rest of the gear, finish the boat rigging, and get the gear loaded. 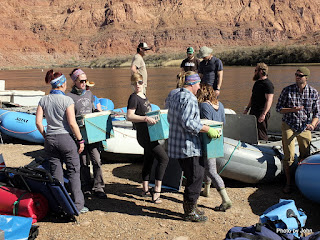 It was an interesting experience to watch the process. As the Moenkopi staff would pull an ammo box off the truck, they'd tell the folks which boat and which location on the boat. Their planning was complete to the level of mapping of each boat for the food, emergency gear, groover boxes, etc. Pretty impressive! 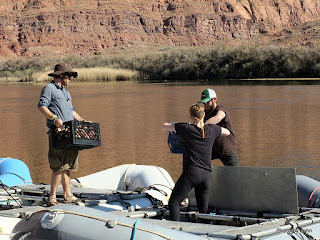 There were milk crates of veggies that went into some of the hatches. Once all of the boat gear and outfitter provided food and equipment was loaded, the stowing of personal gear could commence. I left out the picture of the mountain of canned beverages that were considered essential to the trip. 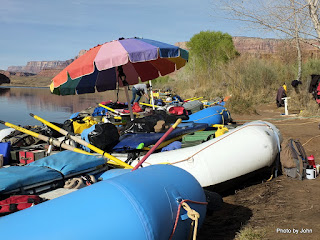 The next morning (it's almost always a two day process at Lee's Ferry,) the boats are tied off at the beach just below the launch ramp, and the last of the overnight camping gear is arriving to be loaded and secured. 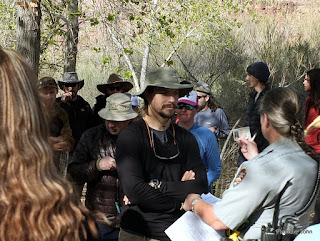 At 9 a.m., the ranger starts the briefing process by checking each individual's photo I.D. against the list of passengers. During the winter season, there are usually two private trips launching each day. Private trips are limited to no more than 16 individuals. 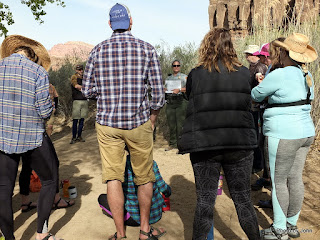 Once every person is accounted for, the ranger begins the briefing. Even though some of the participants have done the trip multiple times, the briefing is considered mandatory. 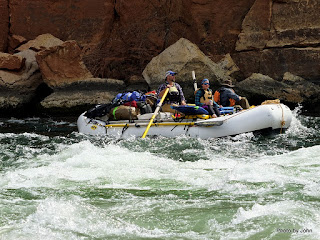 After the briefing by the ranger, and then a briefing by the trip's River Lead, the last gear is tied down, PFDs are zipped, and the trip heads through Paria Riffle to begin their trip through the Grand Canyon. 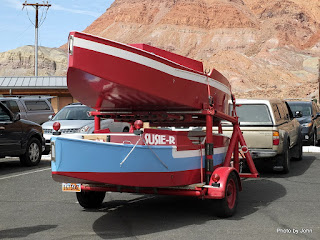 The day after Izzy's trip launched, five historic replica dories and a modern, decked version of a McKenzie River dory arrived to prep for their trip. This trip was limited to wooden dories. I was especially interested in the historic replica double-decker boat trailer hauling the Flavell and Susie R. 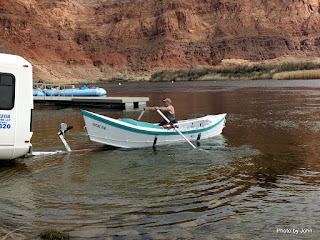 Helen, and her version of Susie Too was going on this trip, along with Tony to share rowing duties. 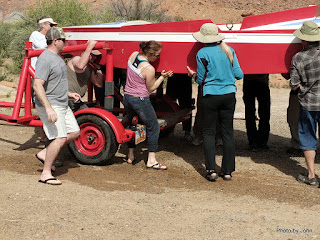 Most of the boats were floated off their trailers. I was wondering how the Flavell was going to launch but it quickly became apparent! 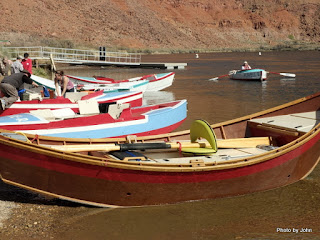 Dories are the sports cars of river craft, but generally don't have space for the monster coolers that form the core of meal planning for raft trips. There was a whole lot of dehydrated food prep going on at Helen's shop before this trip! 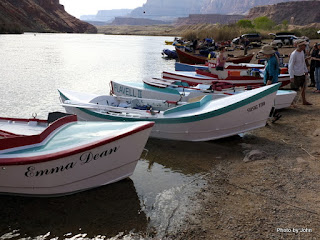 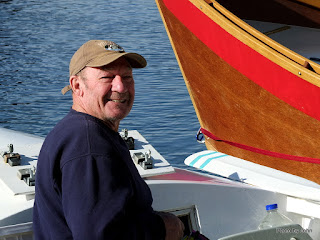 The following morning found Tony stowing the rest of his camp gear in the rear hatch of the Susie Too with his trademark grin on his face. 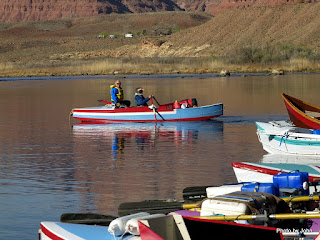 This trip got off to a stressful start. Craig's Flavell II had somehow become untied the night before and drifted away. It was spotted up against some rocks just above Badger rapid - the first rapid of significance in the canyon. Craig and Dave got permission to leave with the Susie R before the briefing to try to get to it before the river rose as it does everyday when they demand more power from Glen Canyon dam.

Reports are the boat did not receive any significant structural damage. It's going to be interesting to hear the rest of the story when they all come off the river!
Posted by Just Finding Our Way at 2:30 PM