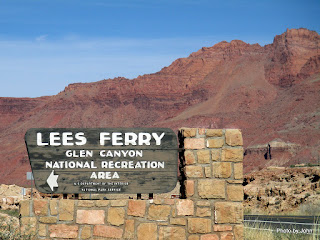 Lee's Ferry (don't ask me why the NPS and others drop the apostrophe) has a long, colorful history closely related to Mormon settlement in Arizona. 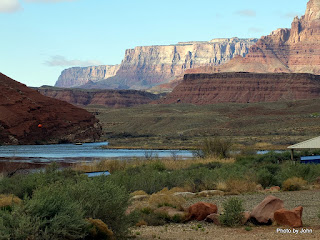 In addition, it's situated in some incredibly beautiful red rock country. 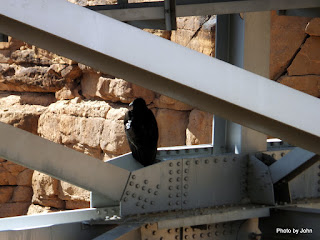 These days, it's known for trout fishing below Glen Canyon dam, flat-water motor raft tours from the dam to Lee's Ferry, raft rigging for white-water trips through the Grand Canyon, California Condors near the bridge, and historical artifacts. 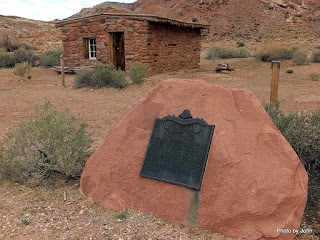 When I was here 18 months ago, it was only for a couple days. This time I had more time to wander around. Every time I'm here, I notice new things. This time it was the commemorative plaque about John Lee's settlement, placed in front of the building that was the American Placer Mining headquarters which had nothing to do with Lee but was photogenic. 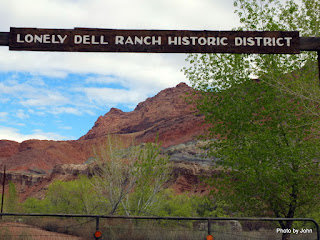 They've closed a short section of road, apparently because the Paria River has been cutting away at the edge of the road. The end result is that you have to walk a bit further to get to Lonely Dell and some of the buildings that Lee did build. 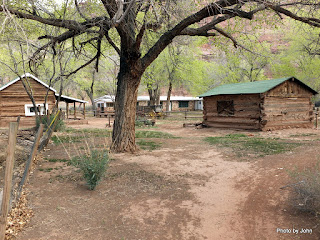 There are cabins from the first two families that settled the place as well as the larger house that was the last house used when Lonely Dell was ranched after the construction of the bridge and decommission of the ferry. Of course, while I was at Lonely Dell I had to get a picture to log the associated virtual cache. 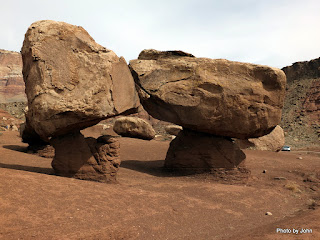 The hoodoos near Cliff Dweller's Lodge always draw me back. They just seem so unreal. 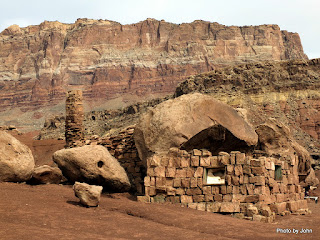 I appreciate the imagination of the people that decided to leverage some of the hoodoo as head starts on dwellings. The roof is gone off the biggest one, but one of the chimneys is still standing. Like Lonely Dell, this one is featured in another virtual cache, so I found the spot (not here) and got the requisite picture. 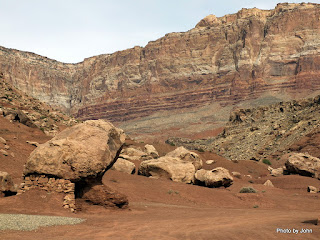 Usually, I'm so enamored with the primary structure that I don't look any further. This is the first time I've visited here and realized there are remains of several other hoodoo homes. I've love to find more information about who built them. 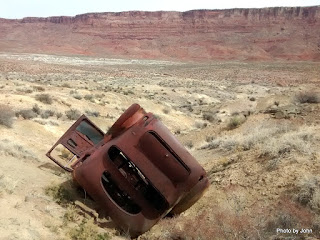 Geocaching brought me to this find. The car is not visible from the road, but it is the namesake for the Dead Body cache that is located nearby. 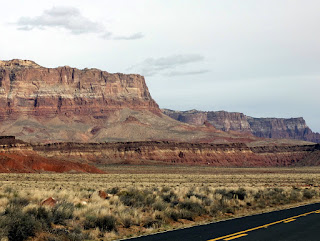 I love the cliffs in this area. No wonder John Wesley Powell was impressed. The Grand Canyon National Park is visited by about 5 million people each year. Only a small percentage spend any time on the North Rim, and of those, very few even slow down as they drive through the Lee's Ferry / Marble Canyon / Vermilion Cliffs area. I guess that is their loss.
Posted by Just Finding Our Way at 2:30 PM