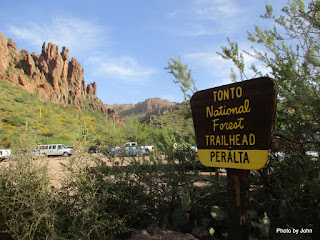 BJ spent nearly 15 years volunteering with Search & Rescue organizations in the Superstitions. It seemed like nearly half of her call-outs were to the Peralta trail. While she was busy hiking the Sups, I almost always had an excuse. Now, with a goal in mind, I wanted to hike to Fremont Saddle for a couple old virtual caches. 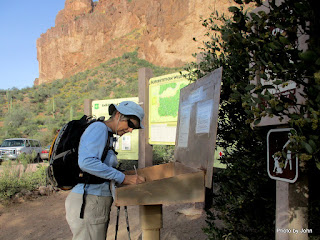 We'd waited for this day because of the forecast cooler temperatures and because her knee had a few days to recuperate since our last hike. We arrived at the trailhead before 9 a.m. and signed the hiker's register. 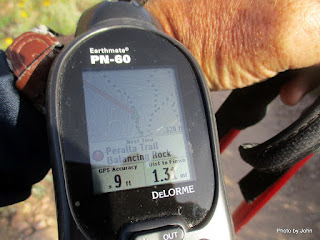 The first goal was the Peralta Trail Balance Rock virtual cache. Originally, it was a traditional cache but since it is located in the wilderness area, the physical cache had to be removed. Now it was simply a matter of getting to the right place and taking a picture to prove you got there. 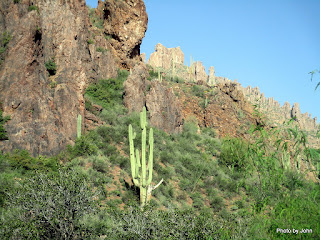 I've got a thing about saguaro cactus, and took lots of pictures that I'll not force upon you. 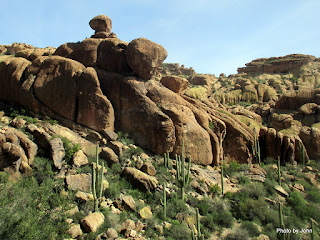 By the time we were 3/4 mile up the trail, we could see the rock that was our first destination. Of course, this wasn't the angle needed for the log entry! As we got closer, we decided that while the top rock was nicely balanced, it could easily be the huge one on this side of it that might be the first to go.

After we got the photos we needed here, we continued on up the trail. 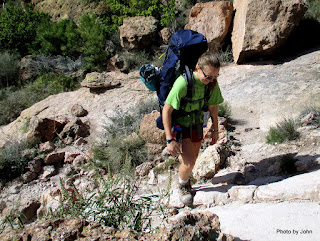 Although it was a Monday, the trail was busier than I expected, including a few young people who were obviously out on multi-day trips. Turns out it was ASU Spring Break and some of the students stayed closer to home. This gal was two days into a loop trip and was already one day ahead of schedule. 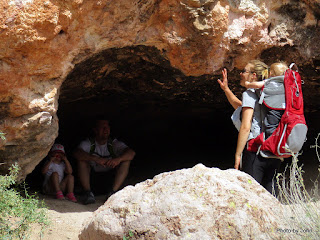 We saw quite a few babies and a few very young children, sometimes walking, sometimes riding along. 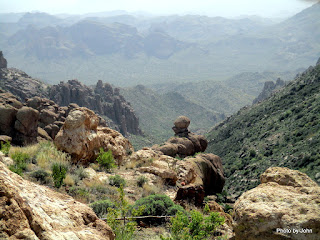 As we got closer to Fremont Saddle, we still have a view, albeit different, of the balanced rock, now well down-valley. 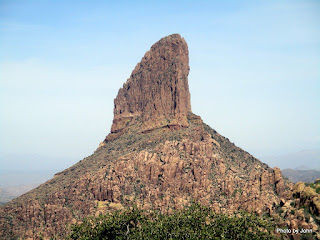 Top of the pass brought the famous Weaver's Needle into view and we had our second goal for the day. The Fremont Saddle cache has been in place since early 2001 and ticked a couple boxes for me. 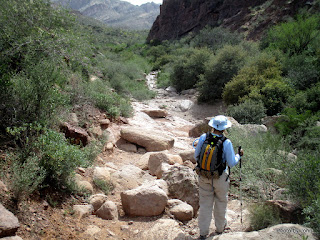 Going back down wasn't much faster, but it didn't require as much deep breathing! The trail was just as rough going down as going up.

I was amazed at the number of people doing this 4 mile R/T, 1,500' elevation gain hike with just a single 16 oz water bottle in their hand. No wonder Search & Rescue was busy!
Posted by Just Finding Our Way at 2:30 PM