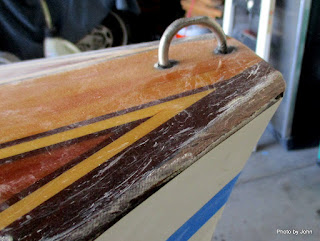 Regular readers know that Kathy's Knot Too Shabby suffered some road rash on our way home from last fall's Green River trip. She had some vacation time prior to Christmas so we got started with the fixes. For some reason, I don't have any pictures of the minor repairs to the hull. 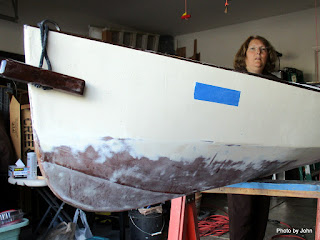 After adding fiberglass reinforcement to the bow, stern, and one area along part of the port chine, we flipped it right side up and started marking spots that would need some attention - anything from light sanding to heavier sanding and fiberglass replacement or reinforcement. 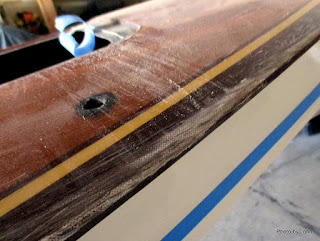 The damage was less than what we originally thought, but there were several places along the port shear line where the fiberglass had been worn away along with a bit of the wood. 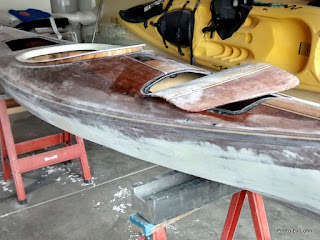 We were pleasantly surprised when much of the "damage" disappeared with some sanding. 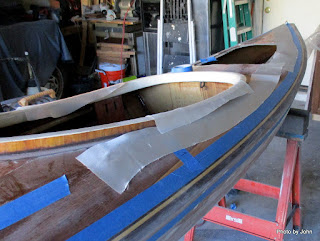 We ended up adding a single layer of glass on the port shear from the front of the cockpit to the stern, and a second layer near the paddler's hips, simply as some additional wear surface in case someone got sloppy with their paddling. We added a similar doubler layer on the starboard shear in the same place. 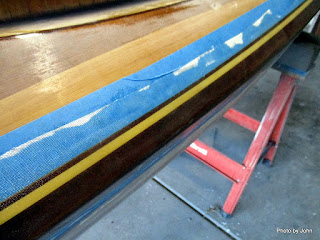 With the glass 'wet-out' with epoxy, the raw wood areas disappeared as we anticipated. 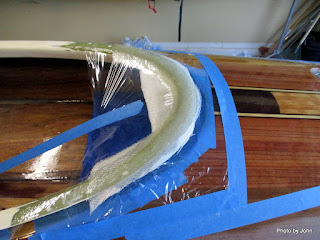 The front of the coaming had taken a lot of abuse so we added a couple layers of 17 oz glass to build it back up, and then covered the glass with Saran Wrap to hold it down while it cured.

Since the pictures, we did some sanding of the cured epoxy. Kathy will do a bit more epoxy work and then hand sand the whole deck in preparation for varnishing. When it's done, bystanders won't ever notice the repairs.
Posted by Just Finding Our Way at 2:30 PM