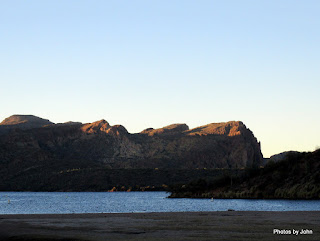 I've paddled Saguaro Lake for years, but never hiked the Butcher Jones* trail until a couple days ago. A new cache was published that appeared to be somewhere near the summit of a hill off the Butcher Jones trail. I headed out while the cliffs around the lake were still in shadow and there was only one other car in the lot. 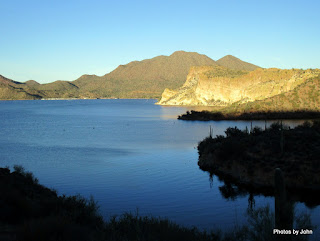 It was nice enjoying the lake from a different angle, and early enough that there was a notable lack of boat traffic. 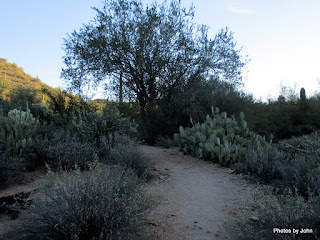 Much of the trail was very smooth, and wandered through a variety of vegitation as if it were a desert aboridum. 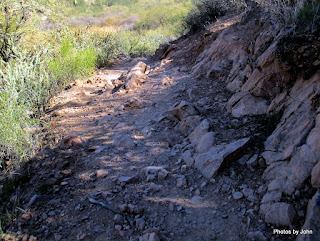 Other places were rocky but I didn't think to take a picture until things had smoothed out a bit. 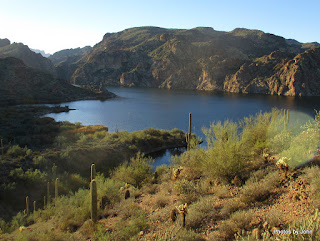 Cresting each ridge provided new views. That point near the center of the picture, pierced by a single saguaro, is a favorite undocumented paddle-in campsite. The canoe pictures near the bottom of the Boats page of the blog were taken on the beach at that point. 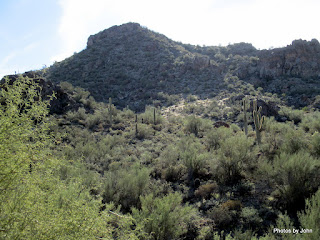 The cache I was looking for was somewhere near the top of that hill. Unfortunately for me, it was the first cache by a new cacher who had never found a cache. As a result, I wasn't sure I should totally trust the coordinates. 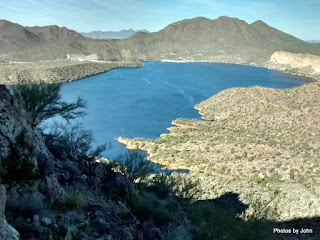 I gambled, and lost. Got within about 40' of the published coordinates before I cliffed out. Made for some phenomenal views, but I was too tuckered to descend to a new route and try a second time from a different direction. This isn't the only mountain top cache. There are rarely visited ones on each of the peaks in the upper right of the picture. 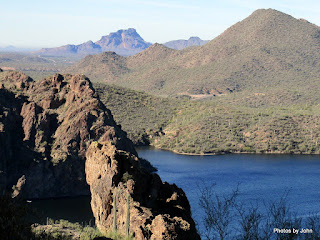 From a different angle I could see all the way to Red Mountain, about 10 miles down river. 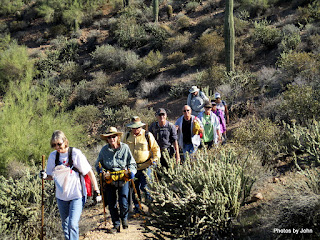 By the time I'd worked my way back down to the trail, groups of hikers started passing, headed out to Burro Cove. It seemed that there was an unwritten rule that each group should include 8 to 10 hikers. I saw 4 groups as I hiked the 2 miles back to the truck. 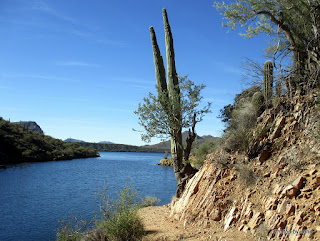 I suspect it may be a while before someone else is motivated to try for this cache's First To Find, but the attempt was well worthwhile. Even with the occasional group of hikers on the return, I enjoyed about 4 hours of mostly solitude. Loved it, and loved the change of perspective.

* Butcher Jones is apparently named for Dr. Walter William Jones, a surgeon, miner, and rancher who lived in the area in the late 1800's.
Posted by Just Finding Our Way at 2:30 PM