Least you think that all I do these days is geocache, I'll include a post about home improvement. A few weeks ago we received a letter from the Home Owners Association requiring waterproofing of the retaining wall that borders common space. Our wall is the ONLY one in the neighborhood was wasn't built with a French Drain in place and the wall is now starting to seep, so... 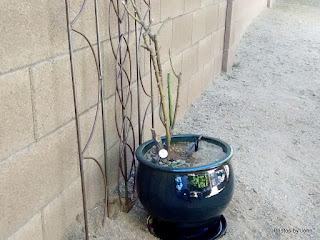 We had a couple raised beds along that wall which meant the roses needed to be transplanted. Turk's not too happy since one of the beds was host to grape tomatoes in season which he really liked - he's been known to eat them off the vine when no one is looking. 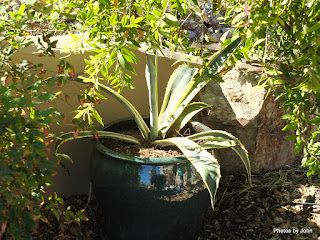 As long as we were transplanting, some of the cactus got new containers as well. The original clay pots survived for over a decade, but were now falling apart, so they got re-potted and I got stuck 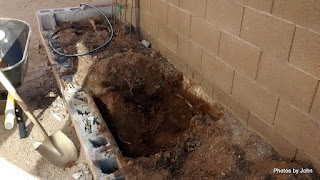 with tearing out the raised beds and hauling off dirt. The beds had been two blocks high, and the mortar and stucco held the blocks together much better than I expected. The sledge hammer got a good workout! 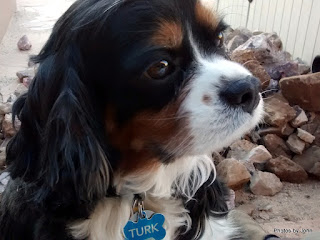 Turk kept a close eye on things. I had a bunch of rock that I moved by hand while he kept insisting on getting in the way. I'm not sure if he wanted to help or if he thought he could protest the project. 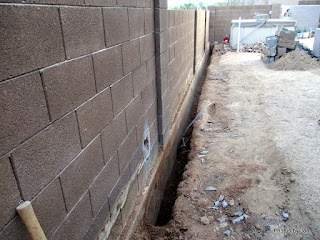 The trench for the French drain hasn't happened magically but it's getting a bit easier, as it gets a bit shallower and I've gotten past the tight clearance behind the hot tub. 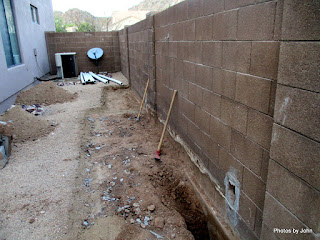 I've still got about 20' to dig, but by the time I get to the end it's only 16" deep which will be easy. The challenge at this point is to find someone affordable to drill eight 2" holes through the wall foundation. 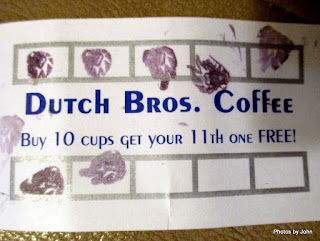 All the dirt from the raised beds and the trench is going to the landfill. The good news is that clean fill dirt is free since they need it for the cap. The other good news is that one of the very few Dutch Bros outlets in the East Valley is on the way home from the landfill so I get to reward myself for each trip. 15,000 pounds of fill dirt with another 4,000 pounds or so to go. Then I can reverse the process with clean river rock... which isn't on the route past Dutch Bros. :-(
Posted by Just Finding Our Way at 2:30 PM