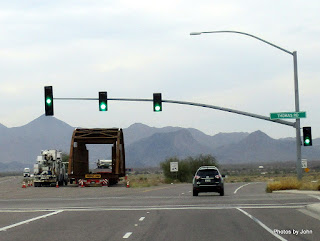 I was really surprised to spot a bridge where it didn't belong on one of my trips to the landfill. 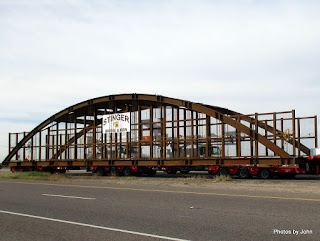 A little closer view showed that it was sitting on a series of dollies or a complex trailer. There were two bucket trucks for linemen and a lead car parked nearby, but this clearly wasn't the final destination. 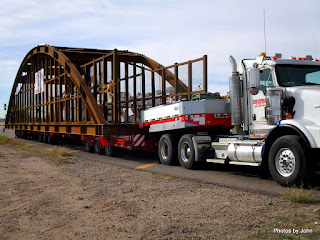 On the way back after shoveling off 3000 more pounds of fill dirt, I stopped to take some pictures. The bridge was built by Stinger Bridge & Iron in Coolidge, AZ. Since it was the middle of the day, I thought it was a bit strange to be parked with no one around. 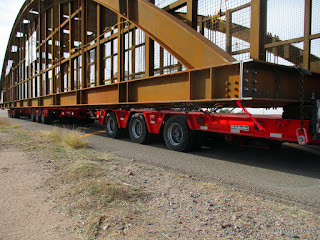 It was a really neat trailer. There were three separate triple axle dollies, all mounted on a large, single, adjustable backbone. Each dolly could be positioned anywhere along the backbone, and each axle then had controllable air bags to manage how much weight each axle carried. 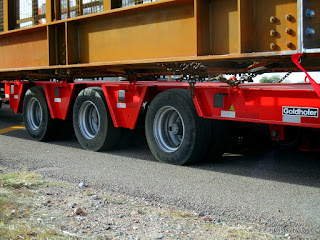 Surprisingly, at least to me, the bridge was supported on the trailer only at each end, with the rest of the steel bridged above the trailer. 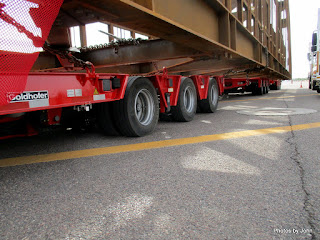 Growing up around trucks, I'm always fascinated by heavy haul rigs - the more wheels the better! This Goldhofer trailer was built in Germany and appears to be very new. 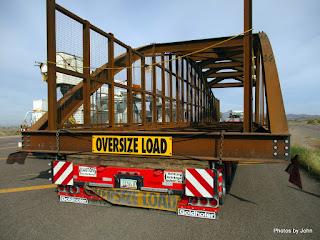 Because I'm nosey, I had to make a phone call. Turns out this pedestrian bridge is part of new construction somewhere around the 101 / 51 area in North Phoenix. 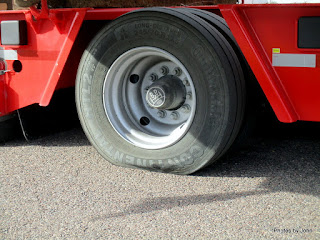 The rear-most axle was clearly carrying excess weight as it sat there without air or hydraulics. I went back the next day in hopes of talking to someone, but the bridge was gone. Next time I'm driving around the loop on the north side of Phoenix, I'll have to keep my eyes open and see if I recognize the bridge in place.
Posted by Just Finding Our Way at 2:30 PM