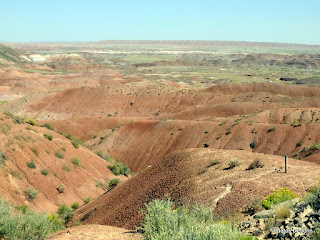 For early readers, you caught me! I'd dropped the pictures in when I got home from my month in Colorado and New Mexico, but never wrote the text.  Sorry!

I worked my way west from my last camp in New Mexico, watching the elevation decrease and the temperatures increase. 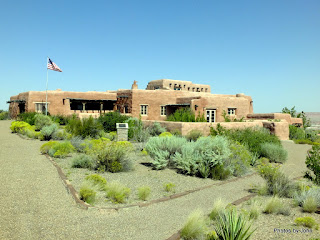 With a short day, I toured through Petrified Forest National Park. I appreciated some of the historic buildings, especially this one that had a beautiful view of the Painted Desert. I love adobe buildings and this one was spectacular. 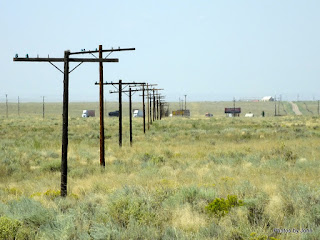 This row of old telephone poles (sans wire) paralleled Route 66. Once the freeway was built (you can see trucks in the background) the road surface of Route 66 through the National Park was removed, but you can still see the roadbed in places. 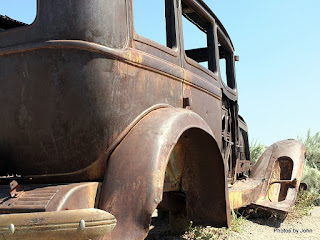 They had some rust to commemorate Route 66. The road through the park winds for miles with pull-outs for areas of interest. 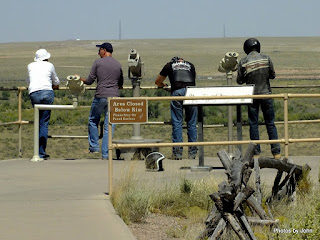 There were lots of foreign visitors the day I was there. These folks were from Spain and Italy, all riding motorcycles. The telescopes are for viewing Newspaper Rock below this viewpoint. The rock itself is now off limits. 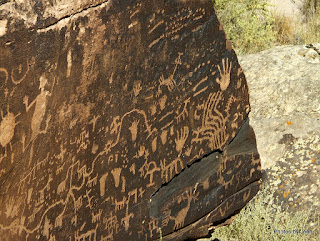 It was nice to have a long telephoto lens to be able to pick up some of the petroglyphs. I especially liked the hand at the right edge of the rock. 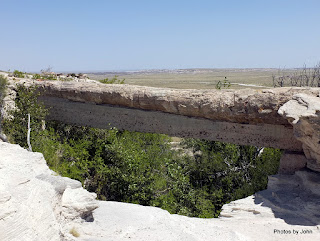 I couldn't get a good angle on the Agate Bridge. It's a petrified log that was braced by a concrete beam in the 1920s. I'd driven through the park once before but didn't remember this feature at all. 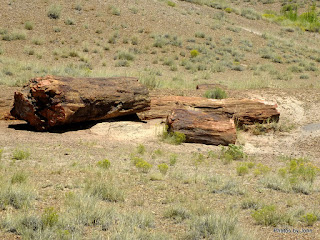 In the southern section of the park, the petrified logs were everywhere. It's like somebody did a bunch of logging but the logs petrified before they could get them yarded and loaded. 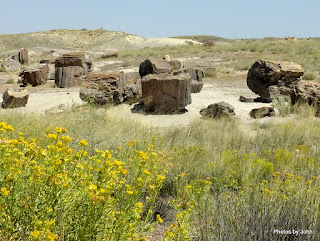 Even though it was mid-August, and very hot, there were still some flowers blooming. 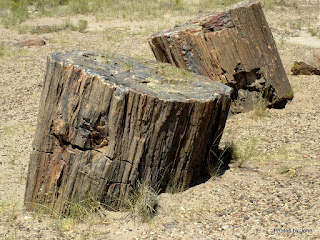 Some of the logs looked like they'd been bucked into short pieces before they petrified. Some of them had rotted out cores. 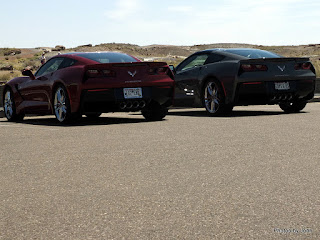 I couldn't resist. A pair of matching (except for color) Corvettes. His and Hers on a road trip from the mid-west. I guess that's one way to resolve who gets to drive. Or maybe it was the solution to luggage space. I didn't ask them. 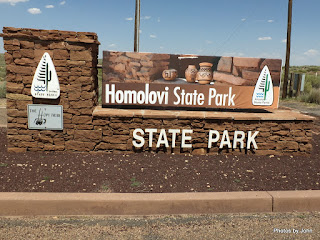 Home for the night was Homolovi State Park because they have 30 amp electric sites for $25 plus the reservation fee. Turns out, there were only six of us in a campground with nearly 150 sites, so reservations were certainly unnecessary, at least in mid August!
Posted by Just Finding Our Way at 2:30 PM