Standing on the Corner 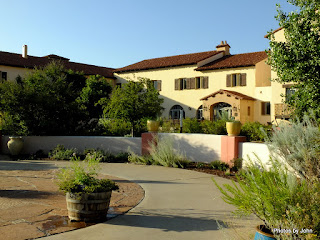 I broke camp at Homolovi State Park too early to visit the ruins so that will wait until next time. Even though it was early, Winslow was awake and I found a spot to park the rig next to the resurrected La Posada Hotel.

Winslow was originally a railroad town, complete with a roundhouse and steam engine maintenance facility. 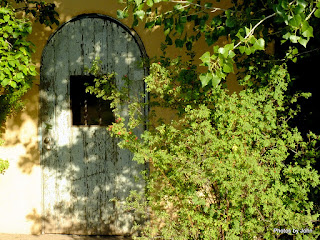 In 1930 Fred Harvey built the last of his great railroad hotels in Winslow. La Posada was designed by Mary Colter, the same woman who designed some of the iconic buildings at the Grand Canyon. In the mid-
1950's the hotel closed and for almost 40 years was used as offices for the Santa Fe railroad. 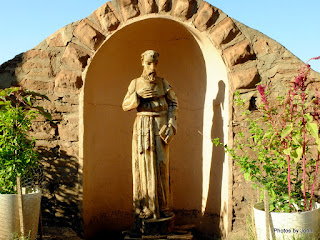 When the railroad threatened to tear it down in the mid 1990's, a Route 66 fan bought it and started to restore it. The hotel seems to do a good business if the number of cars in parking lot are any indication. 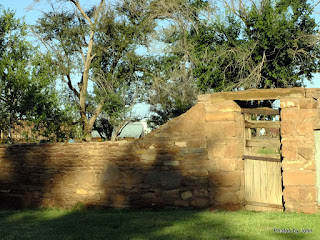 The architecture is wonderful, and they have done an excellent job with the restoration. The Turquoise Room is open again, and drawing accolades for their food and service. 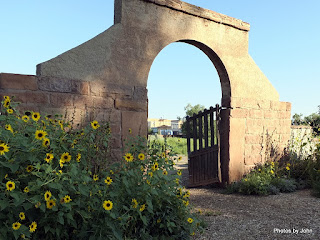 I didn't go inside, but did wander the grounds for a bit without getting kicked out. It's on my list of places to go back to visit. 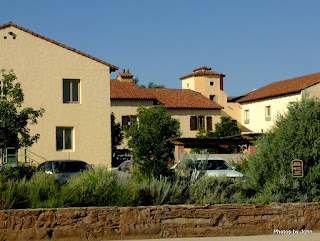 The hotel was designed with a number of intricate gardens, all of which disappeared during the railroad office phase of existence. The owners are now developing the gardens again. The trees have grown to the point that it's difficult to get an inclusive picture of the building. Today, the La Posada continues to serve not only as a hotel, but also as the train station for Winslow. 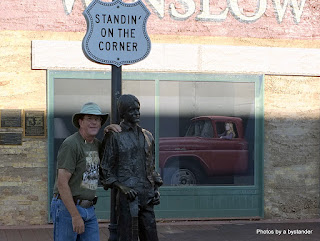 Of course, any visit to Winslow would be incomplete without a visit to "the" corner made famous by the Eagles. You'll note the girl in the flatbed Ford reflected in the window. To make it complete, there is an eagle sitting on the window sill of the second story. 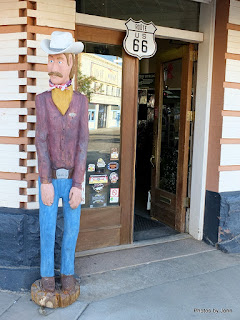 Although early, on the eastern corner of the same intersection, the t-shirt shop was already open for business and the 5 couples on motorcycles touring from Indiana were trying to pick out "the" best souvenir of their visit. 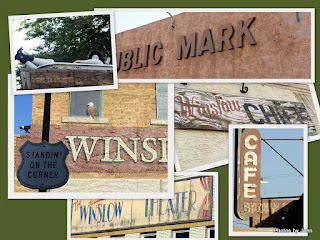 In spite of the revival of the La Posada and the draw of the corner park, Winslow continues to age. While Route 66 runs through downtown, almost all the traffic bypasses on the Interstate, not realizing the opportunity to visit and then leave town with a song stuck in their heads.

I left town headed south, and by noon, this trip was history.
Posted by Just Finding Our Way at 2:30 PM