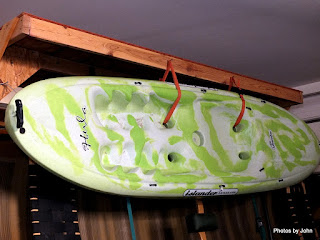 The week before Labor Day, I spent some time hiding a new series of caches on a local lake. I did most of them with my sea kayak, but used one of BJ's short sit-on-top kayaks to install the one that was placed under water. (I know, my kayak friends are shaking their heads in wonder, knowing I'm not a SOT fan, but they sure make good swim platforms.) 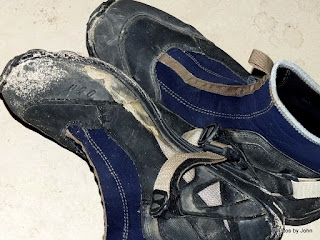 It was only because I was paddling an SOT that I realized my left boot was failing, again. I re-glued the sole about a year ago, but it was failing again. Better to see it now, than on a 9 day Green River trip where the fix would involve a roll of grey tape.

I guess I shouldn't be surprised. I usually only get three years out of a pair and time was up. 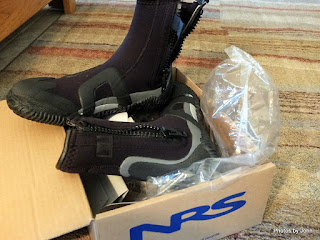 A trip to town scored the last pair in my size from REI. They quit making the style that I had been using, so I'm back to zippers. Zippers don't like Green River mud, but they'll work. 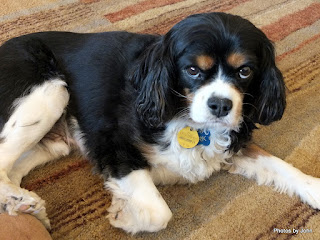 Turk wasn't too sure. He's smart enough to know that he's about to be farmed out to our daughter while we're on the river.

He'll be getting even more antsy as time gets closer and the pile of gear starts building.

By the time you read this, we'll be on our fourth day of our almost annual Green River trip.
Posted by Just Finding Our Way at 2:30 PM