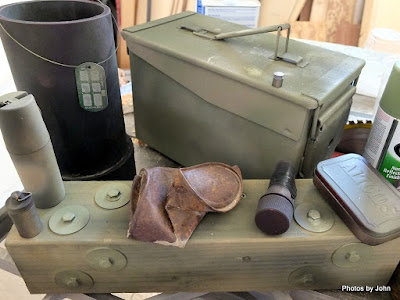 I've been having a bit of fun in the garage, prepping some cache containers. The caches vary in size from the ammo can to the nano-cache sitting on top of the ammo can.

The small canister in the front left, the tag hanging on the 4" ABS pipe, the rusty can (with another tag stuck on the bottom,) and the Altoids tin will all be used on a single, multi-section cache. The other containers will be used on other caches.

The first one to be released was the wood 4x4 with the lag bolts in it. On this one, the trick isn't finding the "hide," but rather, figuring out where the log is hidden and how to access it. Only time will tell if it turns out to be too easy to be fun or too frustrating. Two of the first three people to find it gave it a "Favorite" point, so I guess I hit the mark. 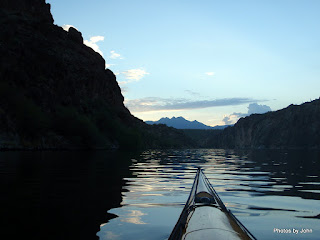 I took the kayak out early one morning, launching on Saguaro Lake at first light, heading out for a fun morning of placing caches. These won't get much traffic, but should make a fun day for waterborne caching, especially during the fall, winter, and spring. 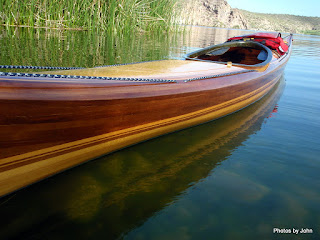 For several years, I've used the solo canoe almost exclusively. If I'm not mistaken, this is the first time in over two years that my sea kayak has been in the water. It was good to get the thick layer of dust off of it.

I must admit, it's been fun dreaming up and placing some of these hides. Every time I'm out caching I'm reminded of our grandson who introduced me to this sport.