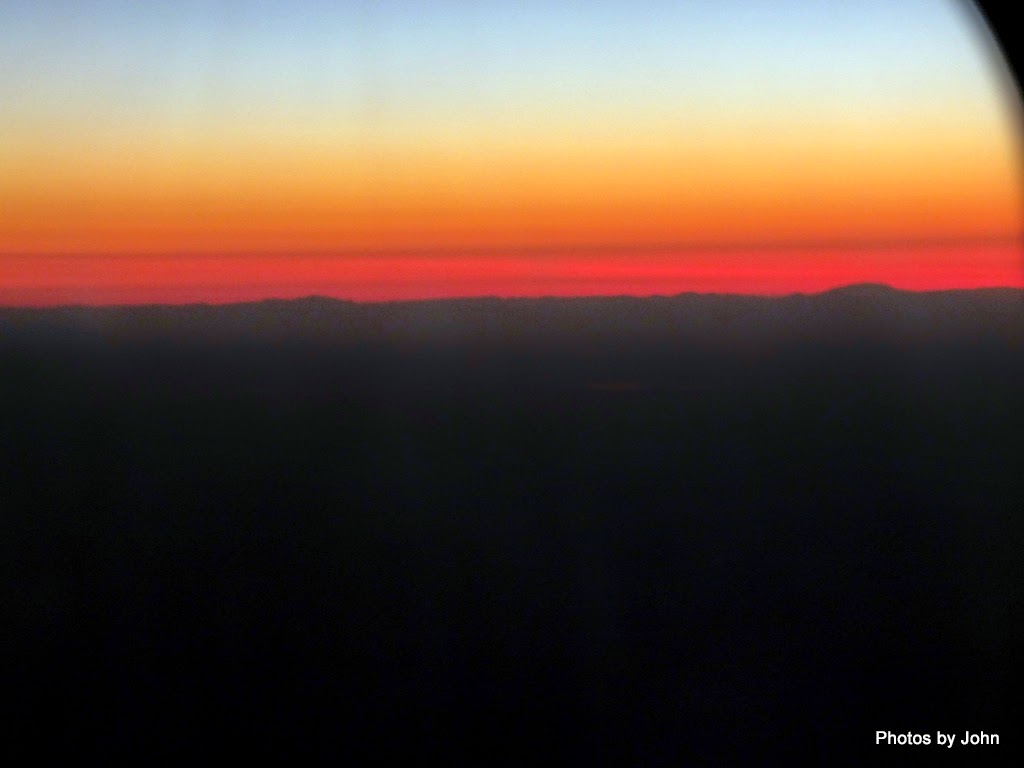 Less than 24 hours after we got home from our latest Black Canyon trip, we were on a plane headed to Anchorage. Amazingly, there were quite a few seats available on the direct flight, creating an opportunity for us to watch Spencer's last hockey tournament of the year. 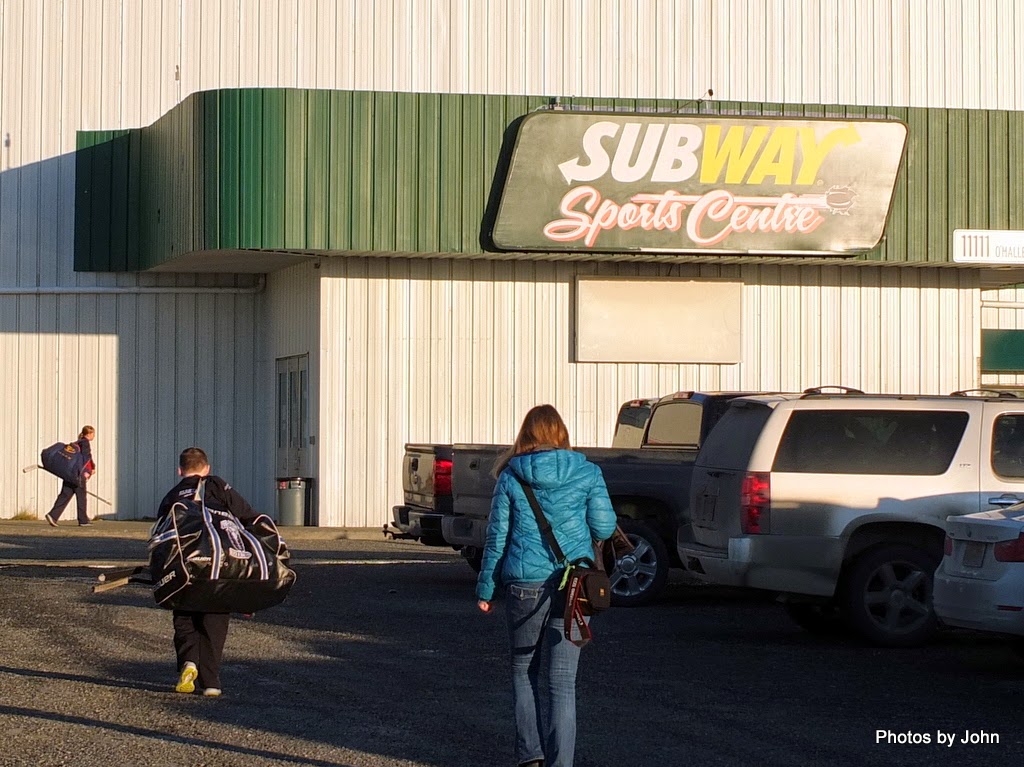 The tournaments (minor & major teams) were held at the Subway Sports Center for all the Squirt (10u) teams in the state. Spencer plays for the Eagle River Blue Devils major team. He's one of the bigger kids on his team, even if his gear bag is nearly as big as him. 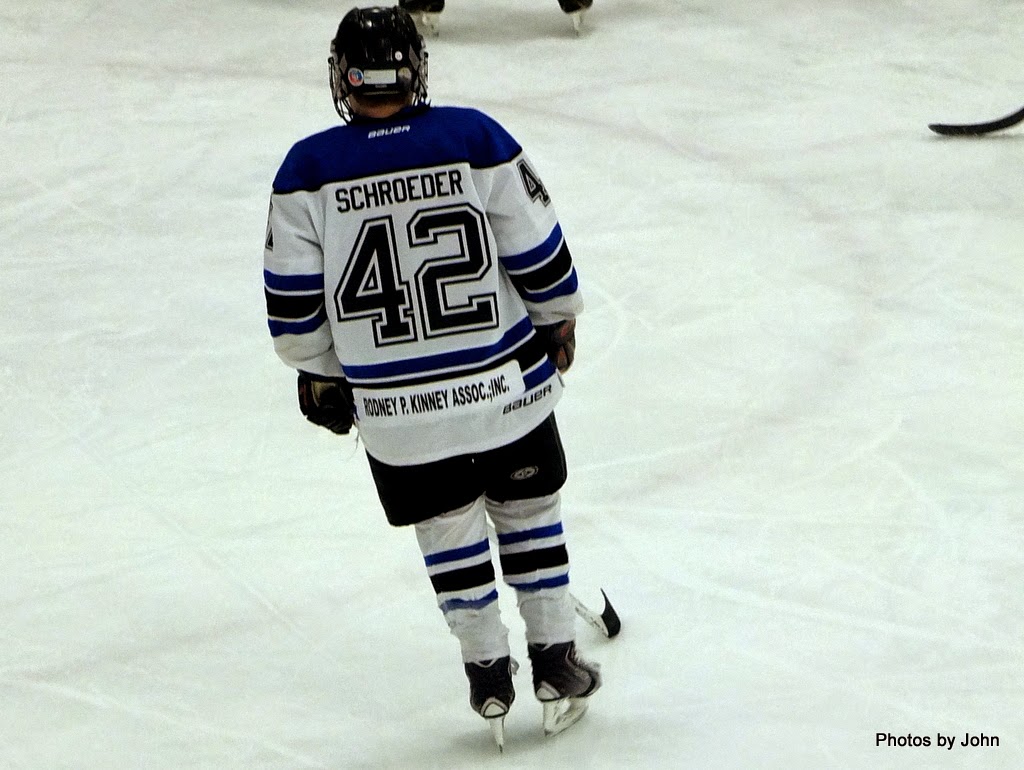 Every time we see him play I'm amazed at how much he's grown, and how well he skates. He sure didn't get any of that from my side of the family, although his grandmother can roller skate well enough to avoid major humiliation. 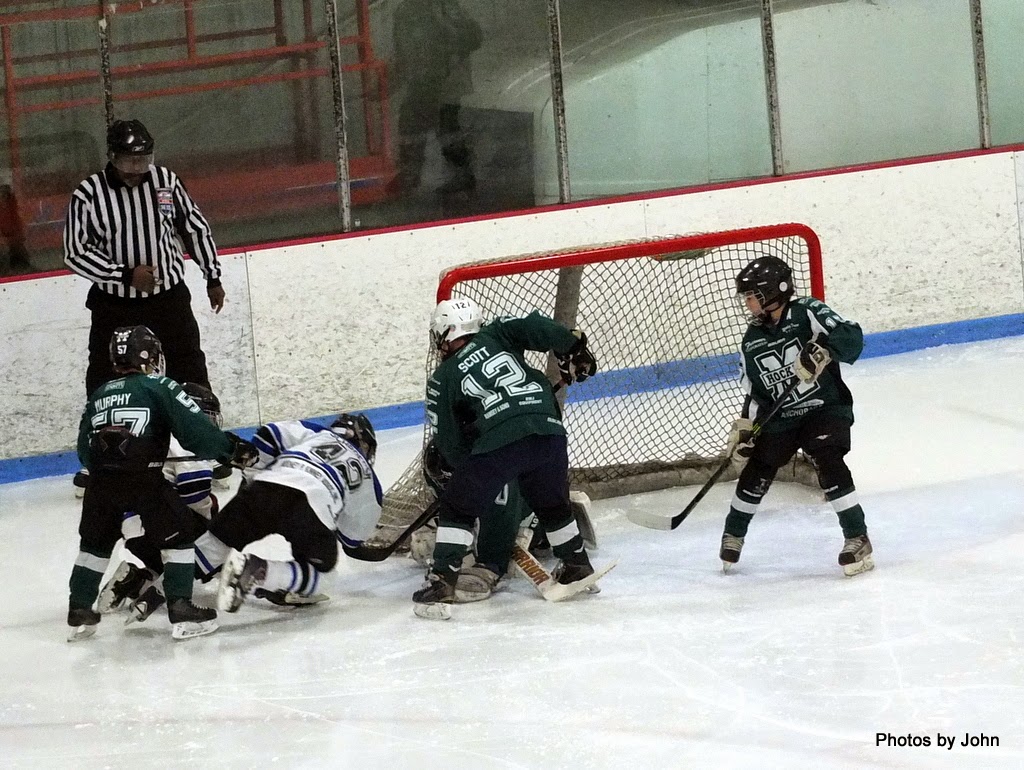 They had four games in the first round, with the top two teams going to the finals. Their first game was won against the Moose, 6-2. 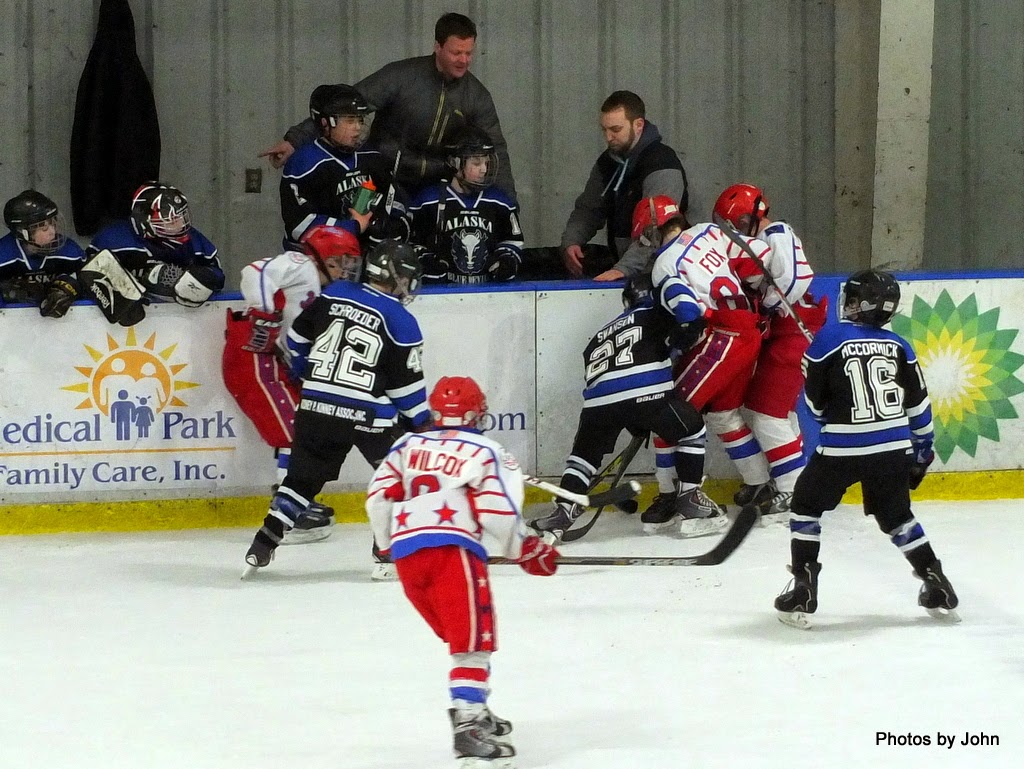 They played the All-Stars in their second game on Friday, beating them 4-2. It was a delight to watch the Blue Devils win two games in a row. 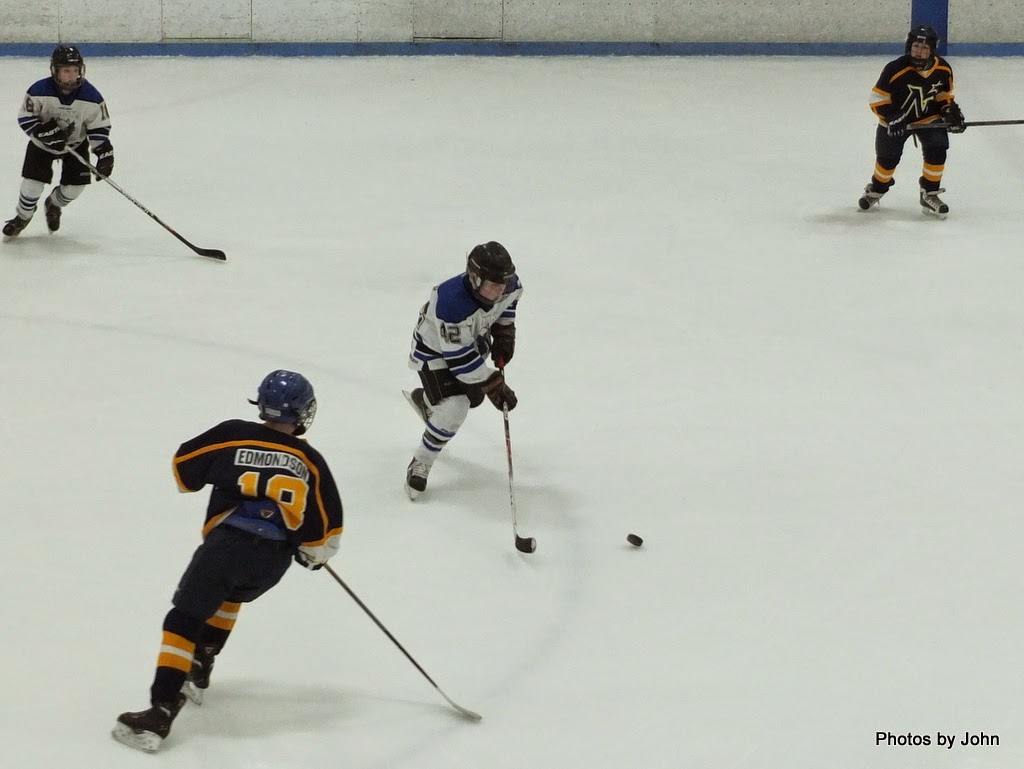 Their first game on Saturday was against the North Stars. It was another well played game, resulting in the Blue Devil's third win of the tournament, 5-2. 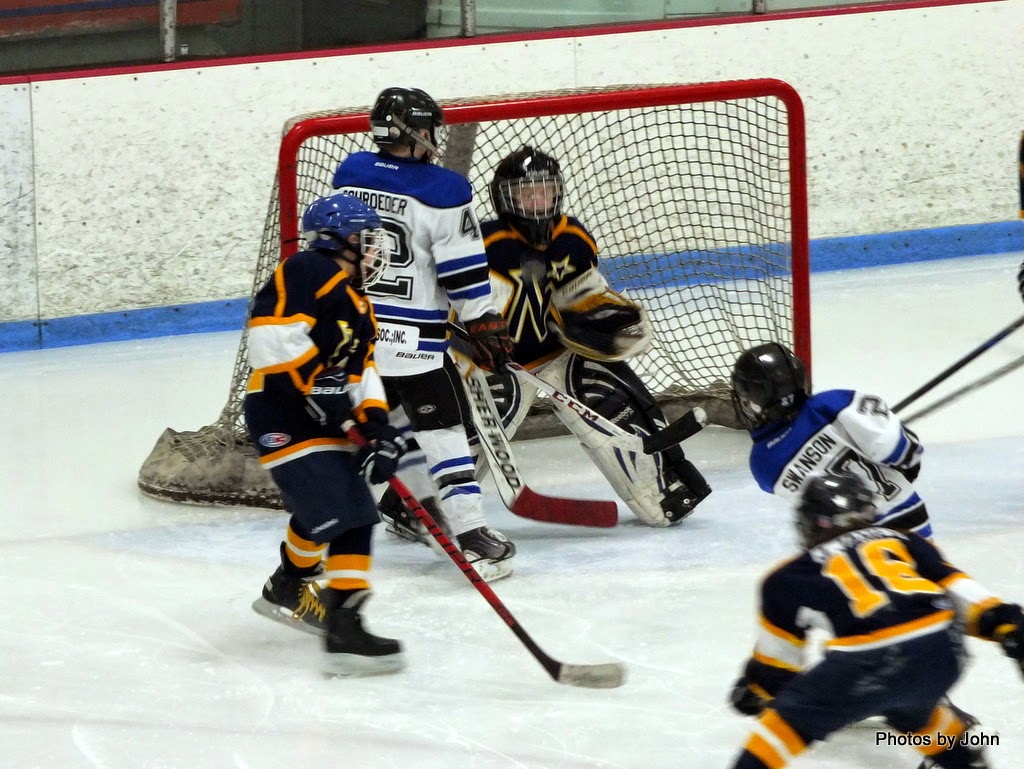 In all the games, it was interesting to see Spencer leveraging his size to get a bit physical when necessary. 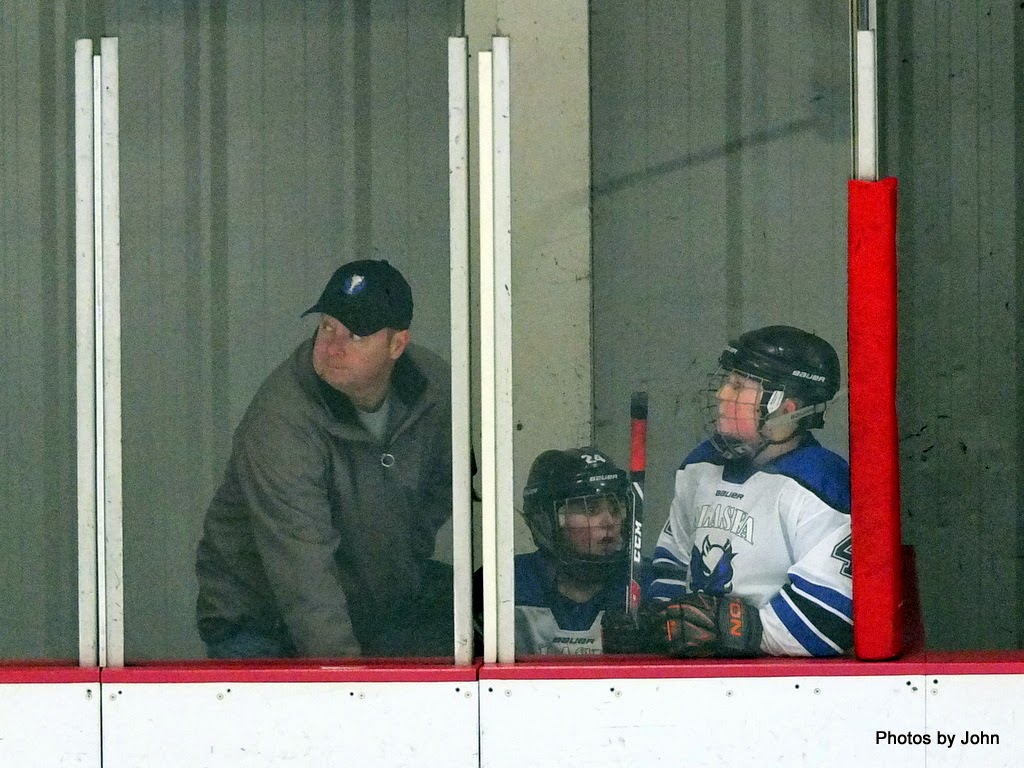 He did end up in the "sin bin" at least once as a result. Our son was staffing the penalty box for a couple of the games (each team provides a parent to staff their penalty box), which provided an opportunity for some father-son time. Jeff tried to take a selfie with Spencer, but Spencer would have none of it! 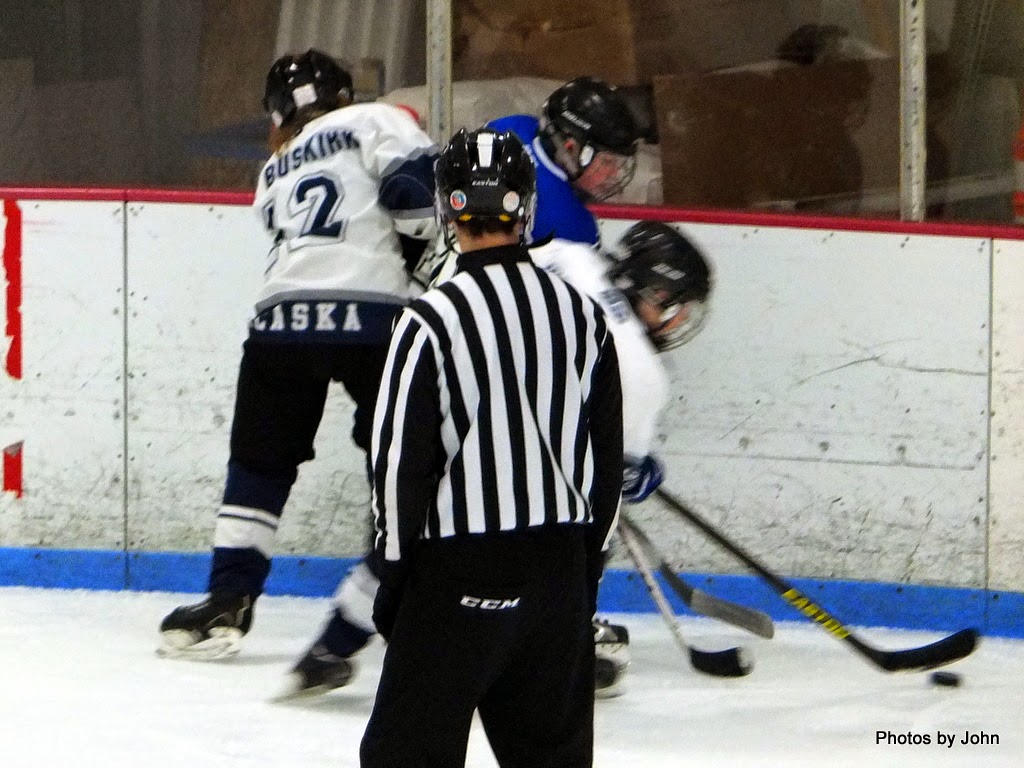 The Blue Devils played the Wasilla Jr. Avalanche in their fourth game. This was a team they'd never beaten, and once again, they lost to the Avs by six goals. 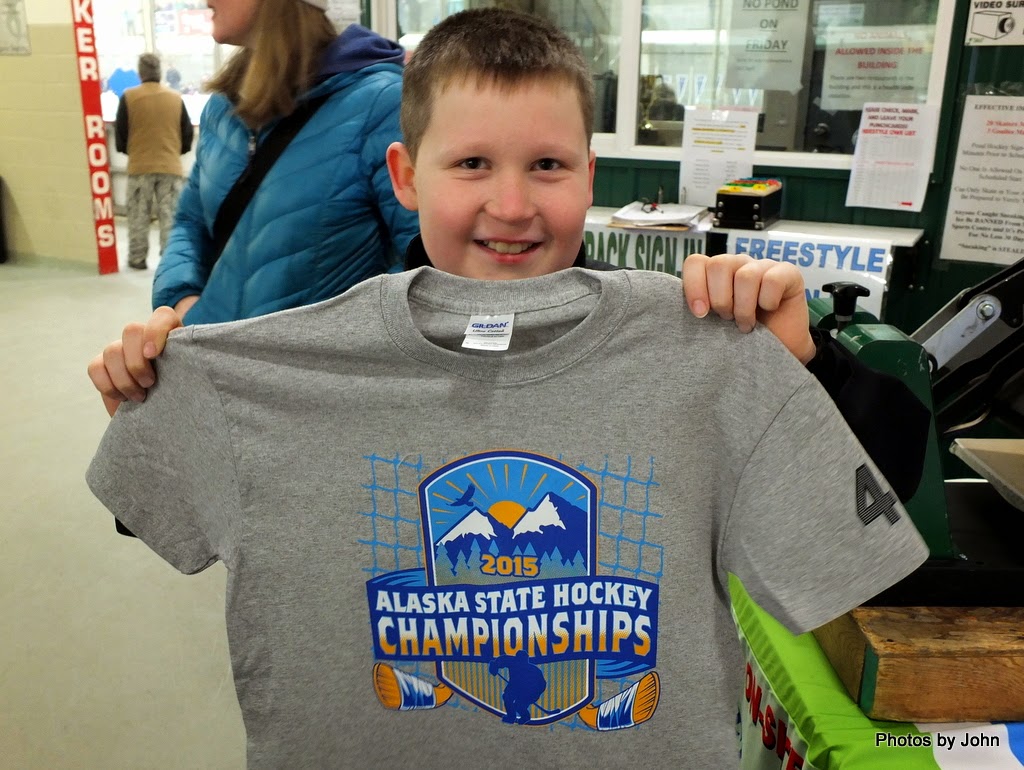 Even with the one loss, they qualified in second place in the tournament in order to face the Junior Avalanche once again in the finals. Spencer got a shirt to commemorate making the finals. 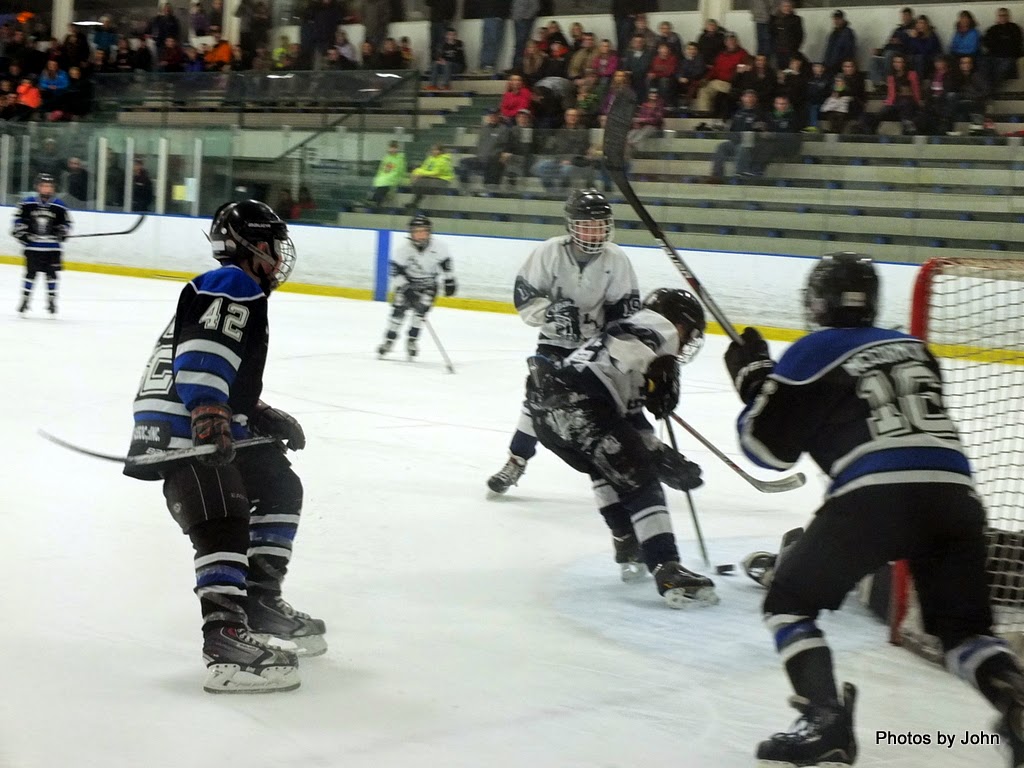 The Blue Devils scored first in the final game which was very fast, and more physical. The score went back and forth until the Blue Devils pulled ahead again, 3-2 about 10 minutes into the second period. 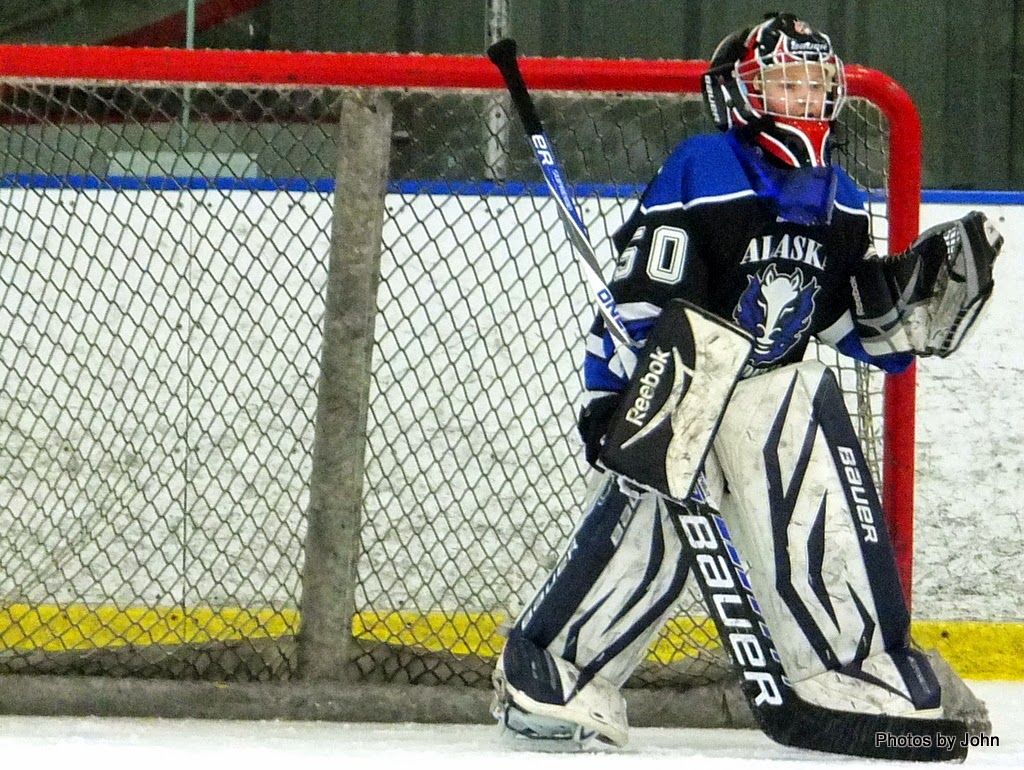 Try as they might, they weren't able to score any more points, but with this little guy and his teammates putting up a very strong defense, they held that score for nearly 20 minutes, emerging victorious. 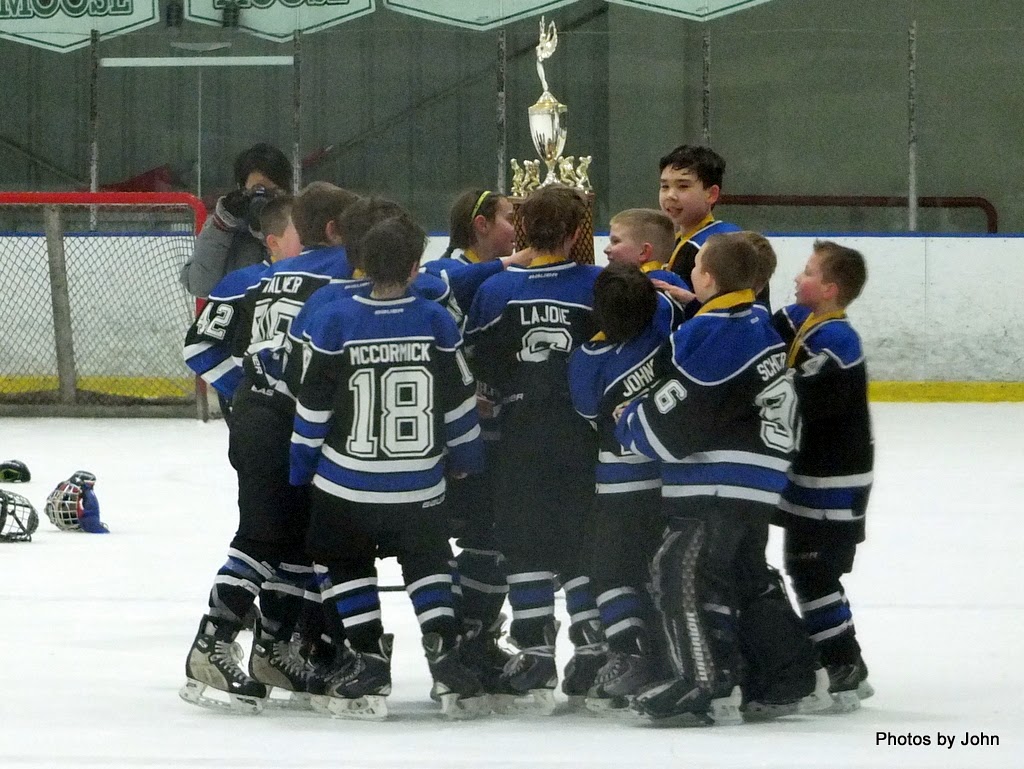 The State Championship trophy is a traveling trophy. This is the first time ever that the Blue Devils name will be on the trophy. 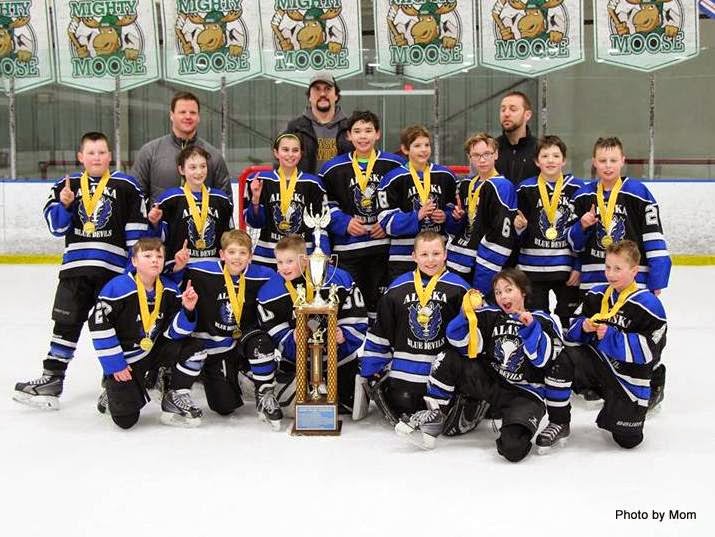 They managed to get the ecstatic team to stand still long enough to get a picture of the team and coaches. 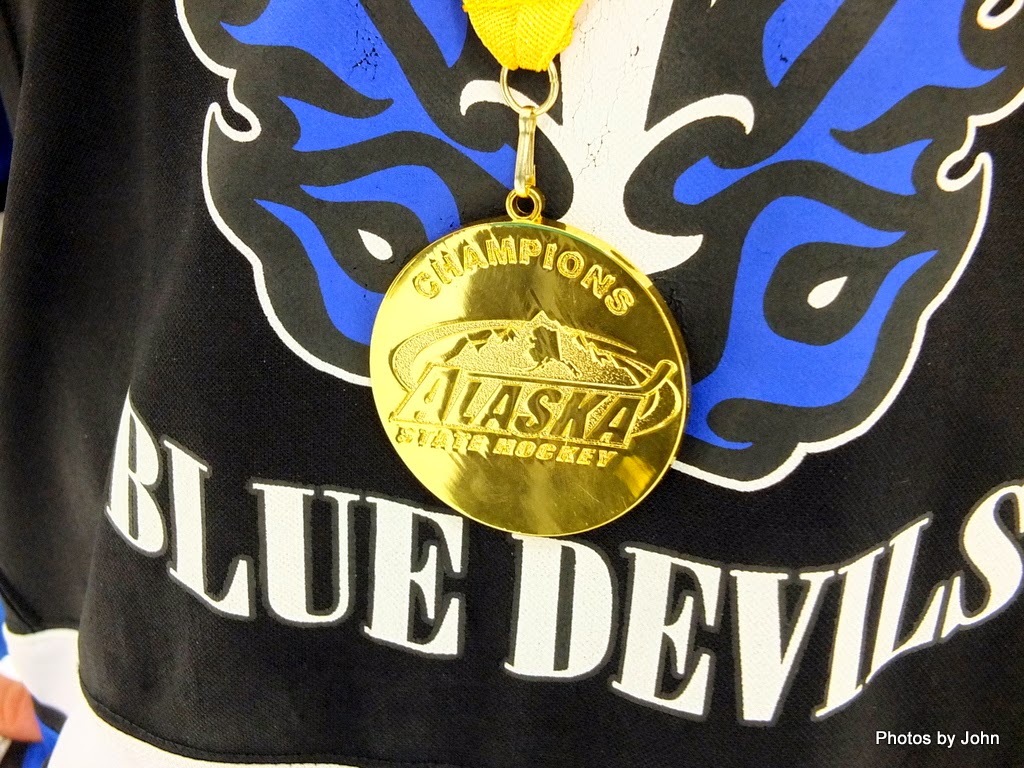 Each team member got a metal to commemorate their win. 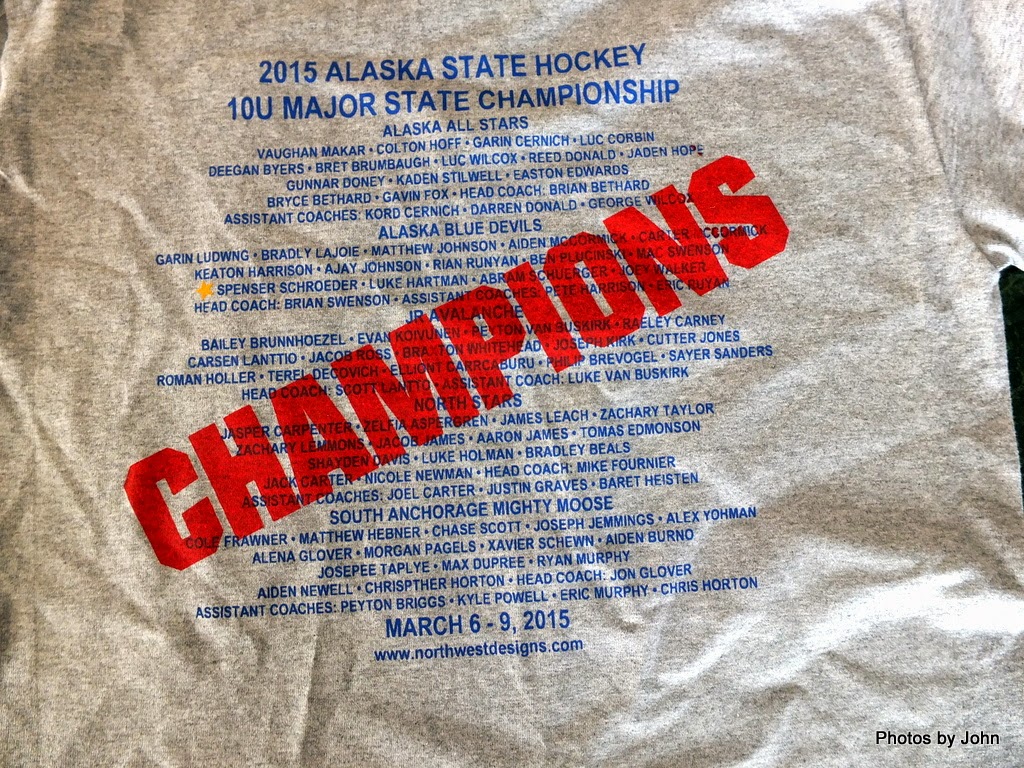 Spencer's shirt got a major modification. This may be the best the shirt will ever look. When we left their house Monday morning to start our trip home, he was still wearing it. Not sure how his Mom is going to get it off of him to ever wash it.

The planes were chock-a-block full on Monday with folks that had attended the Iditarod Ceremonial start. It took us about 18 hours door to door to get home, and was worth every minute of it!