How To Have The River To Yourself 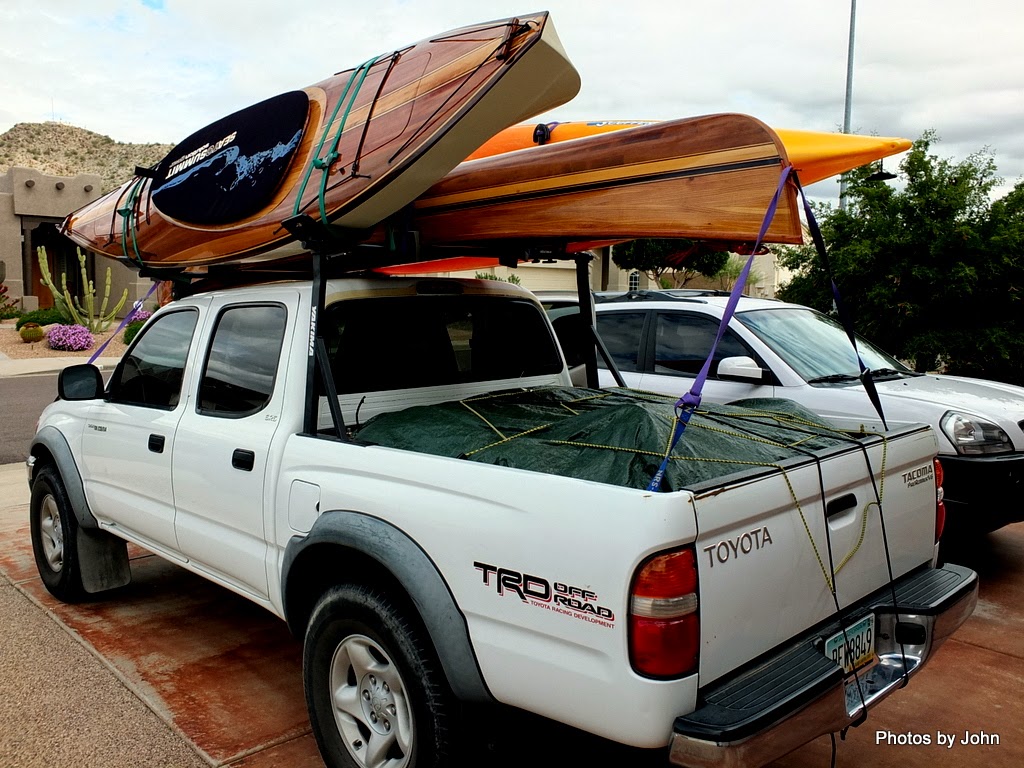 We got the boats loaded and the gear loaded and tarped down so that we could leave town Sunday afternoon, headed to Boulder City, Nevada. The weather was threatening at home and the reports for the next couple days in Boulder City weren't pretty. Some sources were suggesting a possible weather window for Monday morning. 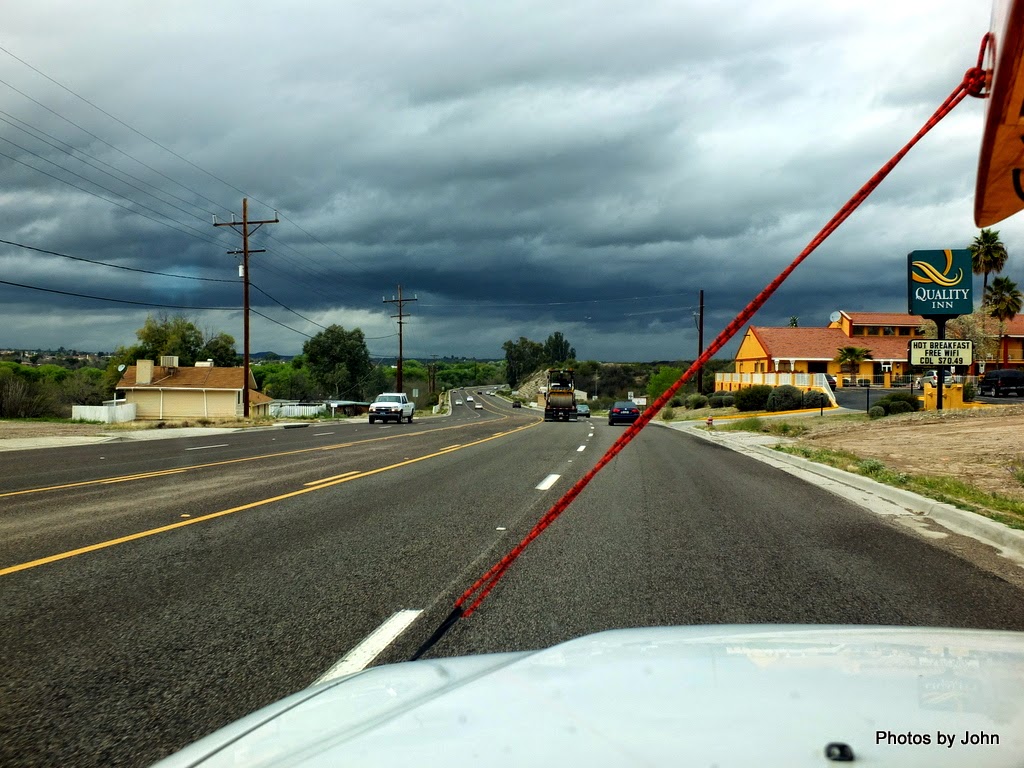 As we entered Wickenburg from the south, the skies ahead of us were only pretty for storm chasers. We waved to The Bayfield Bunch as we went by the turn-off to Congress, just as it started to get serious about raining. 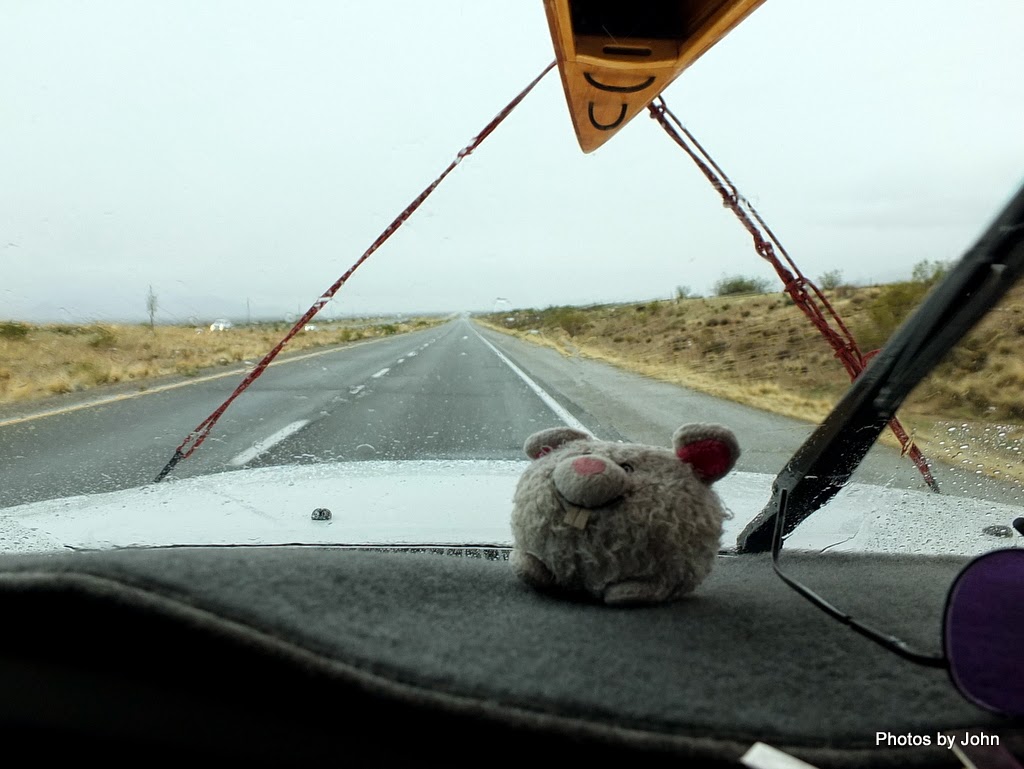 Further north, while the rain continued, the sky did get a bit brighter. Squeak wasn't about to look. He was upset about not having a raincoat but I threatened him with a Ziploc bag which shut him up.

Home for the night was the Railroad Pass Hotel & Casino between Boulder City and Henderson. First time for us. Large rooms, good price, clean, and Suzanne, from Take To The Highway, in the parking lot, looking for a different adventure. 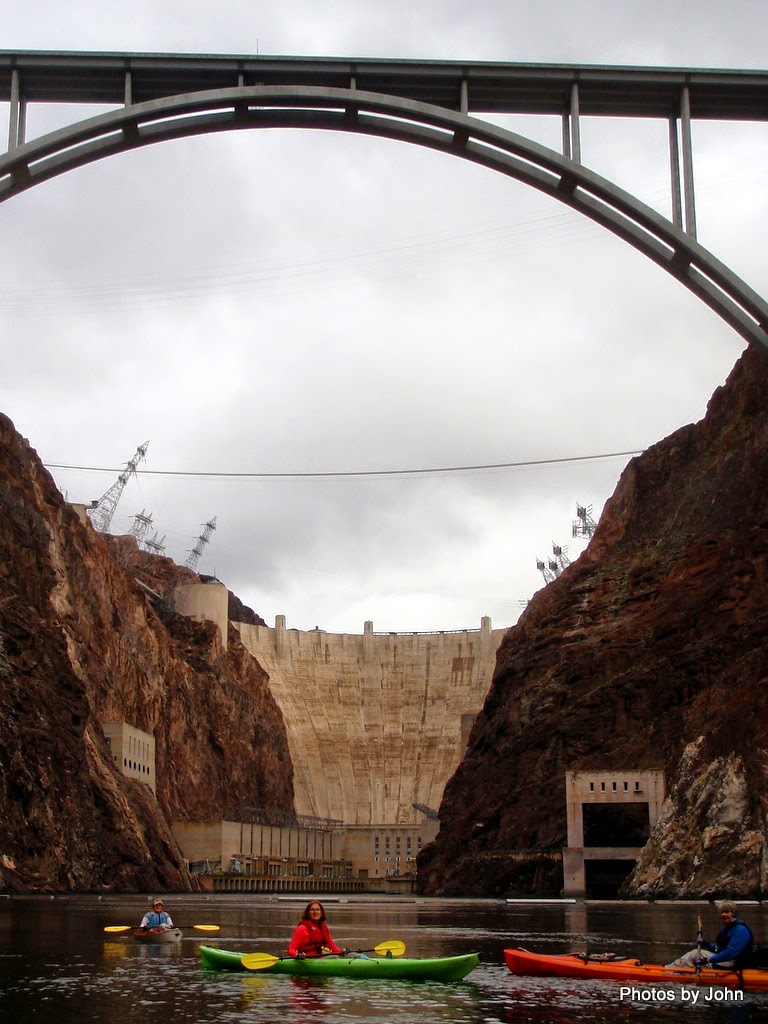 Monday morning, we met our shuttle from Desert Adventures for the launch below Hoover Dam. For years, outfitters used a parking lot at the Hacienda Hotel & Casino for organizing shuttles and clearing initial dam security checks. The Hacienda was sold and is now the Hoover Dam Lodge, but their rooms were closed for remodeling, thus our stay at Railroad Pass. Frankly, I'm betting we'll base our next trip out of Railroad Pass.

The National Park Service has instituted a new rule limiting the launch window to 15 minutes which made our launch a fire drill that was unexpected and had the potential for creating safety issues. 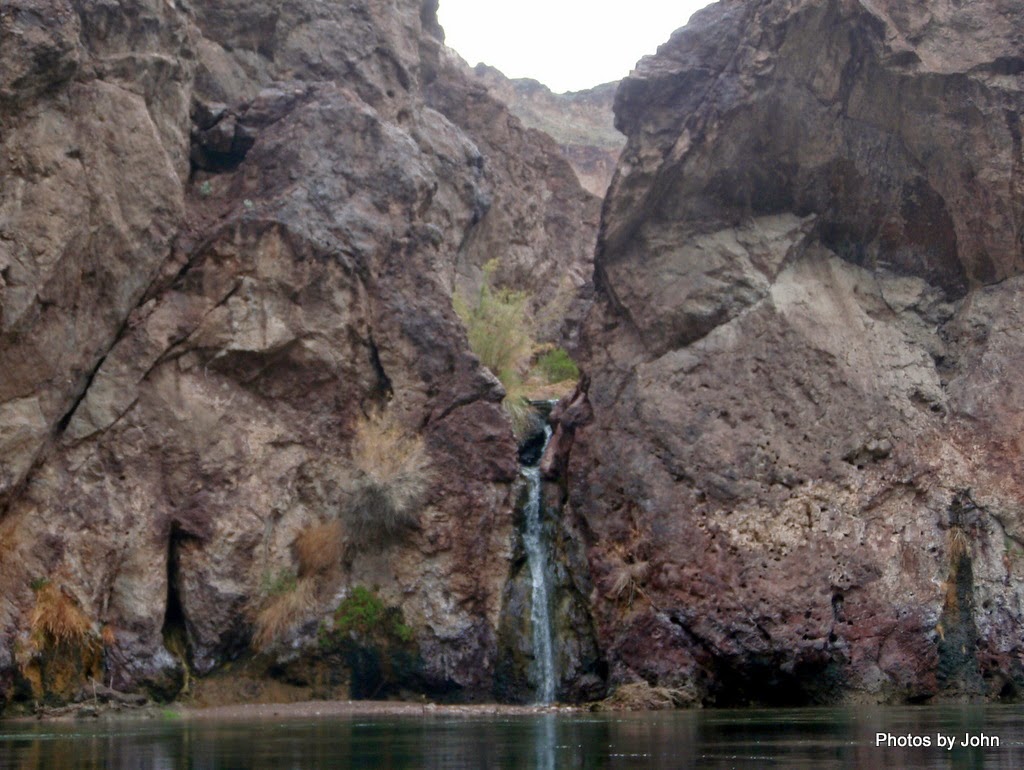 Our gamble was paying off. The rain stopped before we launched. None the less, we decided to bypass exploration of the warm waterfalls and upstream hot springs, electing instead to get to Arizona Hot Springs and get camp set up while the weather was good. 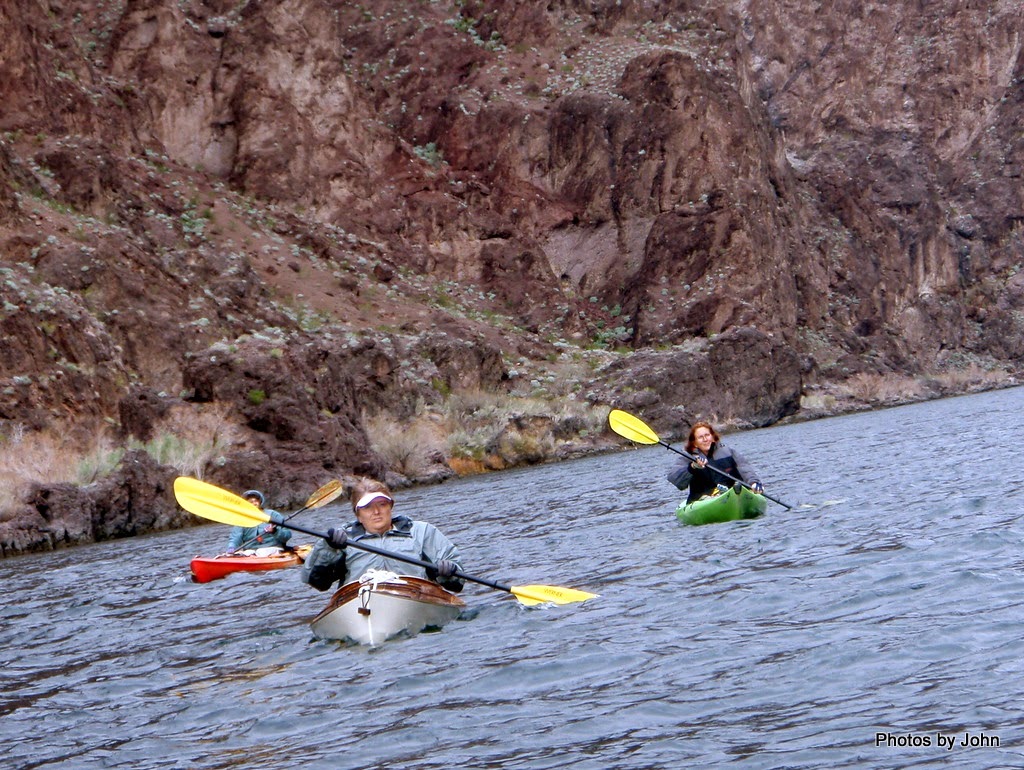 A cool headwind started to build so everyone pulled on rain jackets over their PFDs, providing instant warmth. 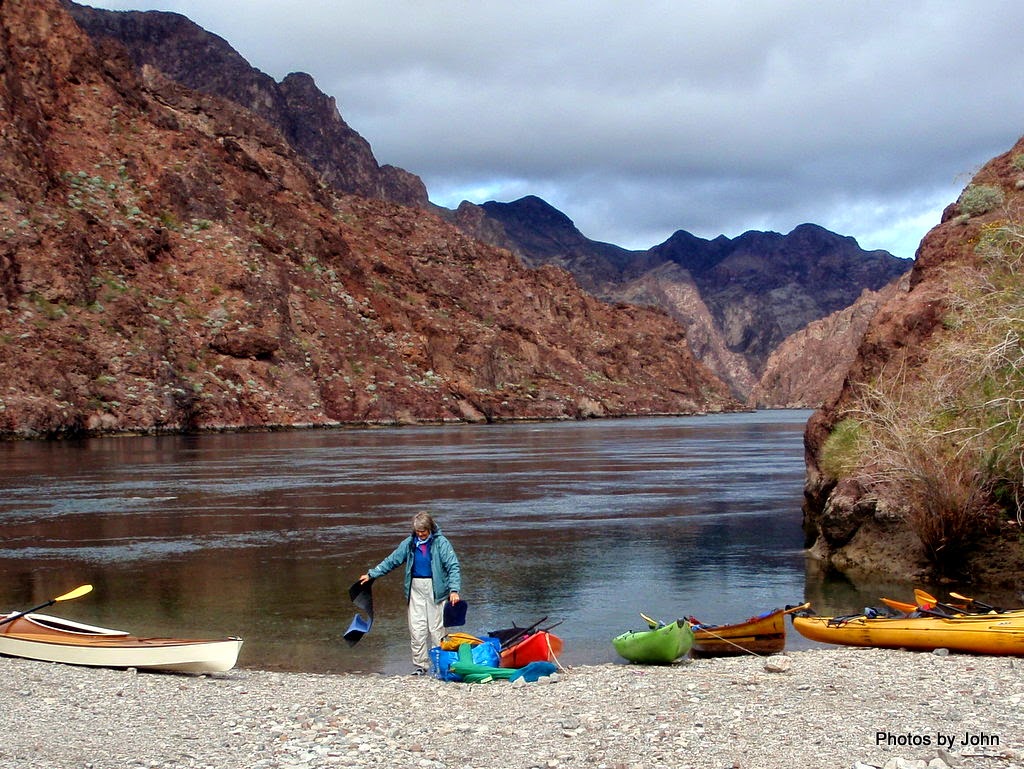 There were three tandem kayaks on the beach when we arrived - day trippers stopping for a quick visit to the hot springs. We got our gear unloaded as the sky turned darker. 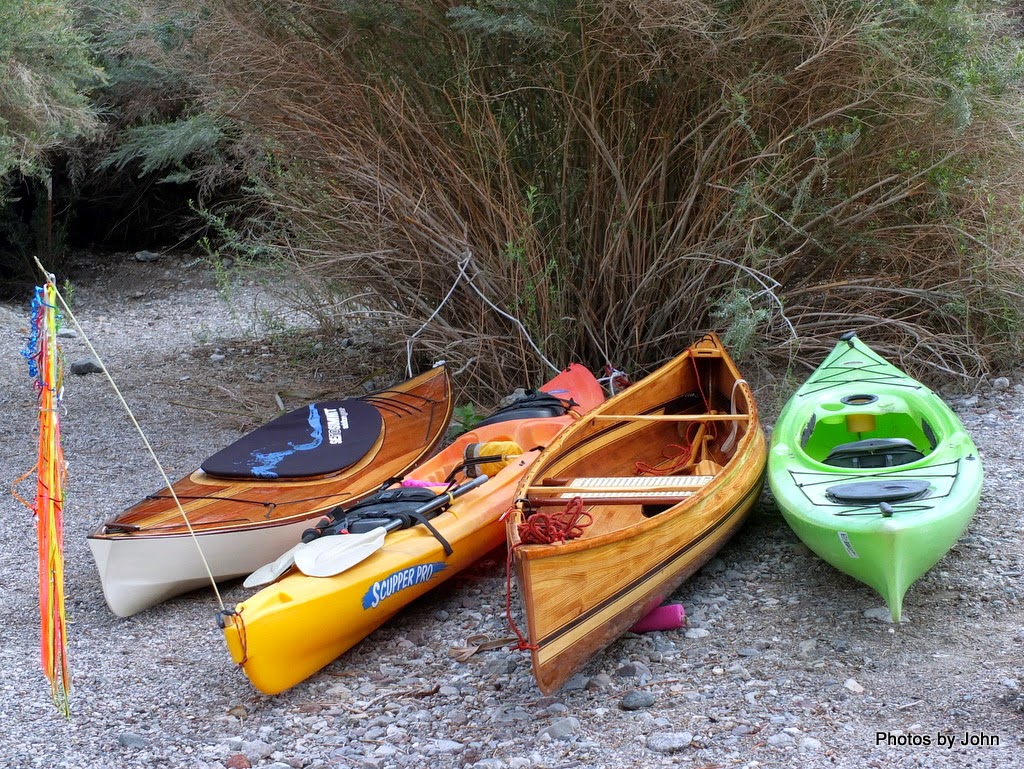 With the boats tied off, we headed up the beach to set up camp. 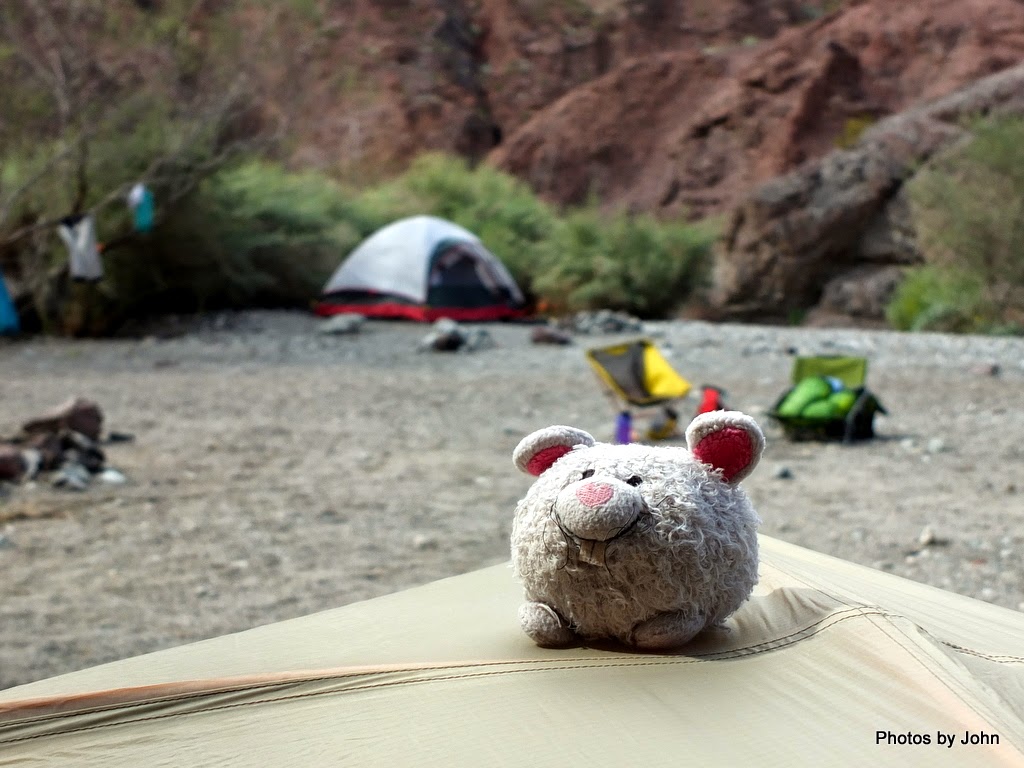 We picked out spots that had as much height as possible in case we got a heavy rain. We were the only people camping here, unlike the last overnight trip when there there were over 50 people camping.

The canyon had a significant flash since the last time I was here, and a number of the "normal" sites were in poor condition as a result. 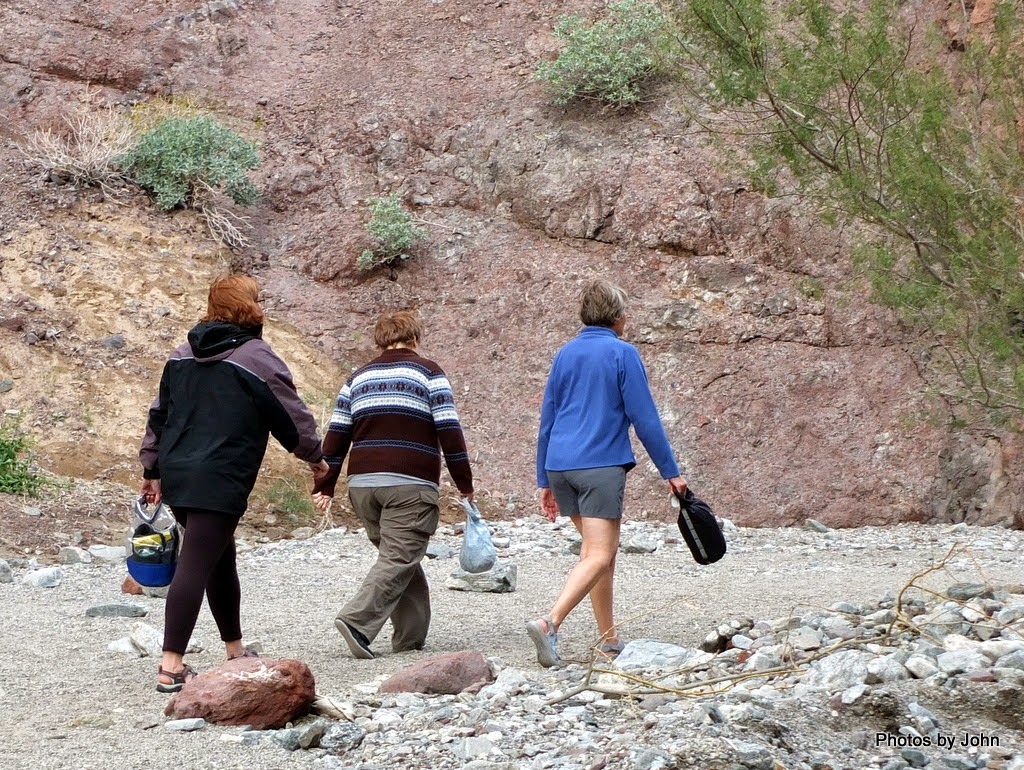 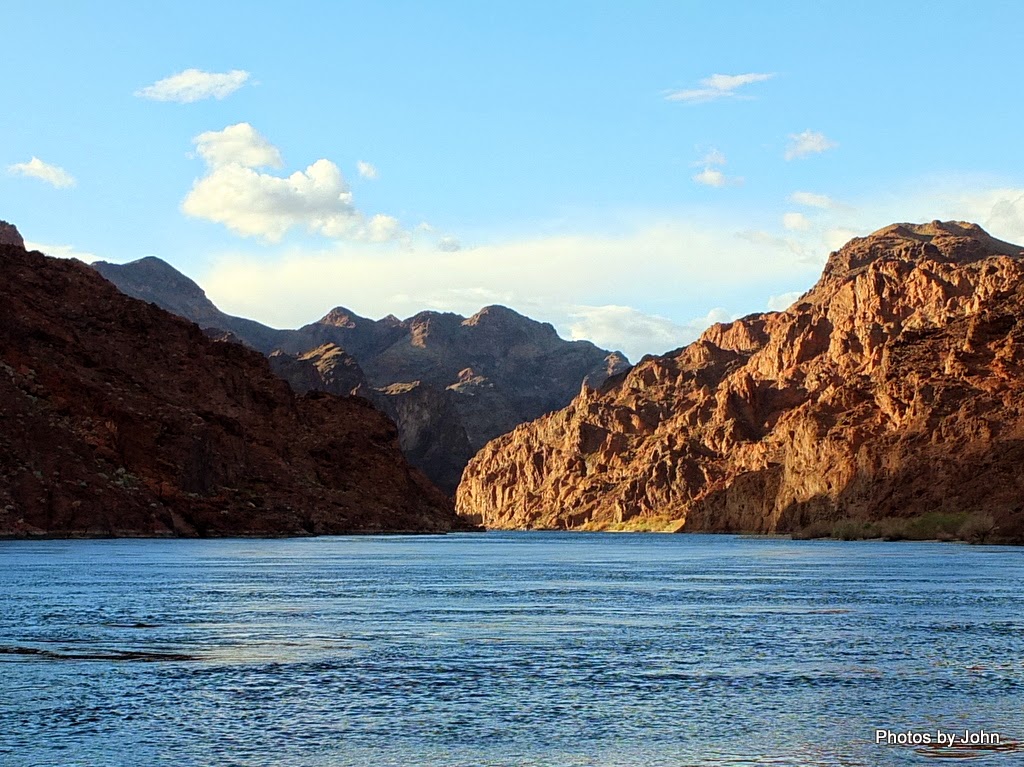 The sky cleared before the sun started setting. We were all surprised by the moderate evening temperatures - warmer than the forecast. We sat out on the beach, listening to the river until after 9 p.m. The bright moon made flashlights unnecessary, and the sky suggested a nice day coming.
Posted by Just Finding Our Way at 2:30 PM