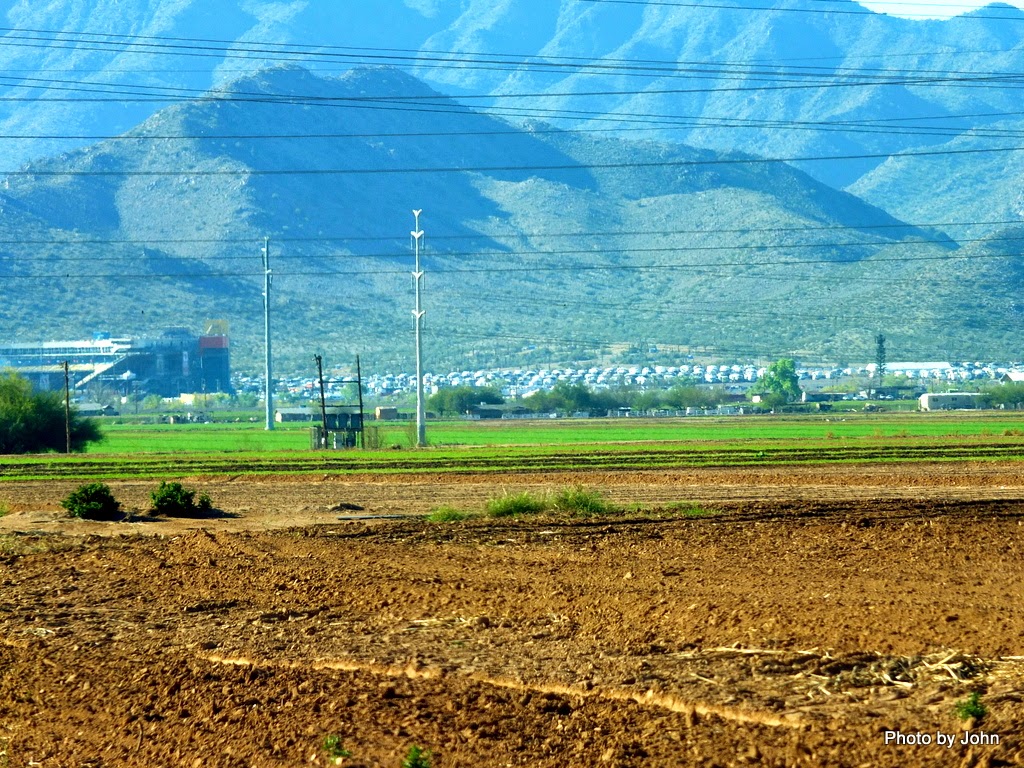 We've had this one on our calendar for several months. When we got to where we could see Phoenix International Raceway in the distance, it was clear that many others had it on their calendars, too. 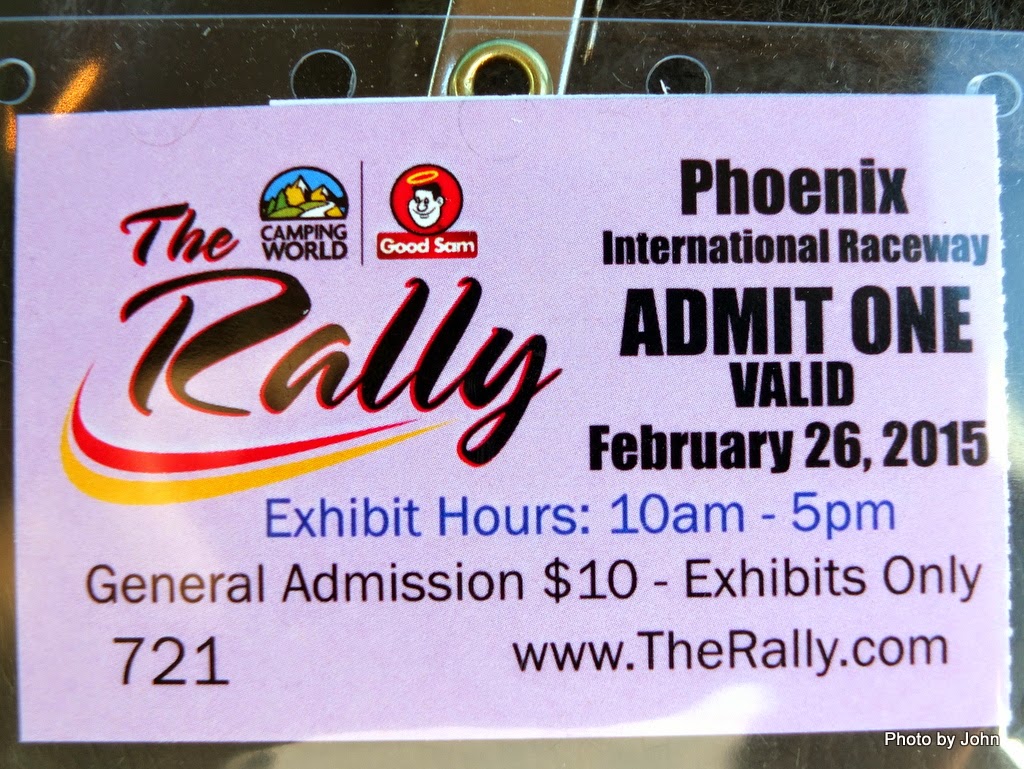 Our approach was to get in, and get out, leaving the trailer at home. 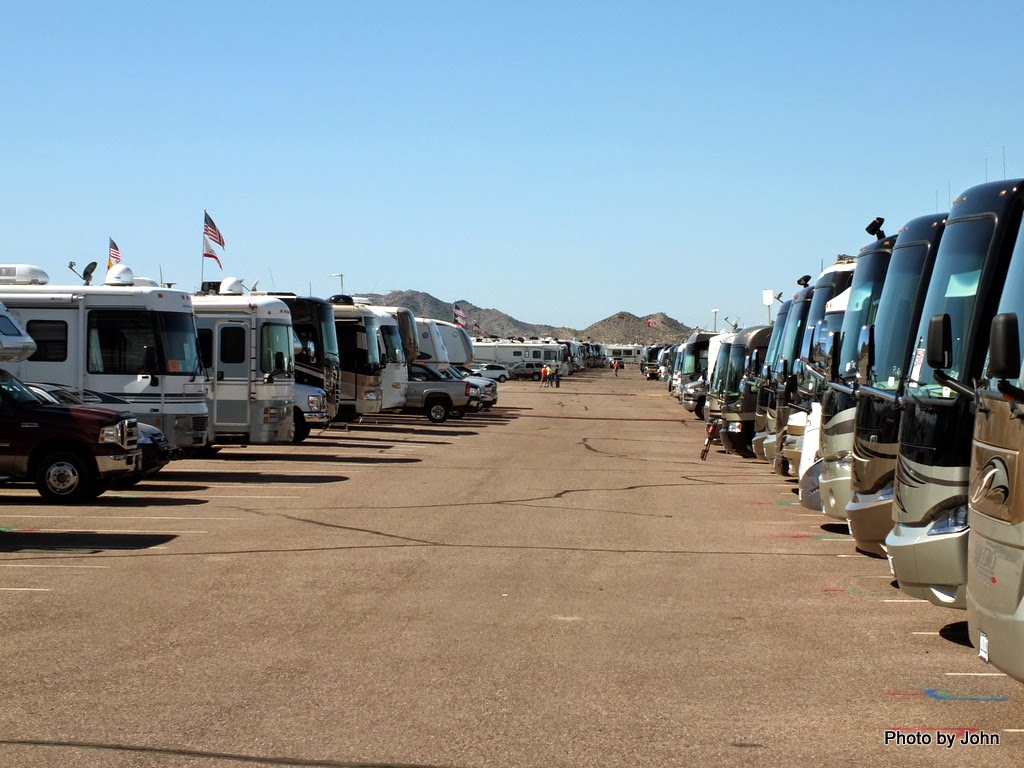 The report was that on Thursday morning, there were already over 1500 RVs lined up "camping" at the Good Sam National Rally. For a price, you can "camp" in neat rows, attend seminars, and hear some live music in the evenings. Definitely, not our style! 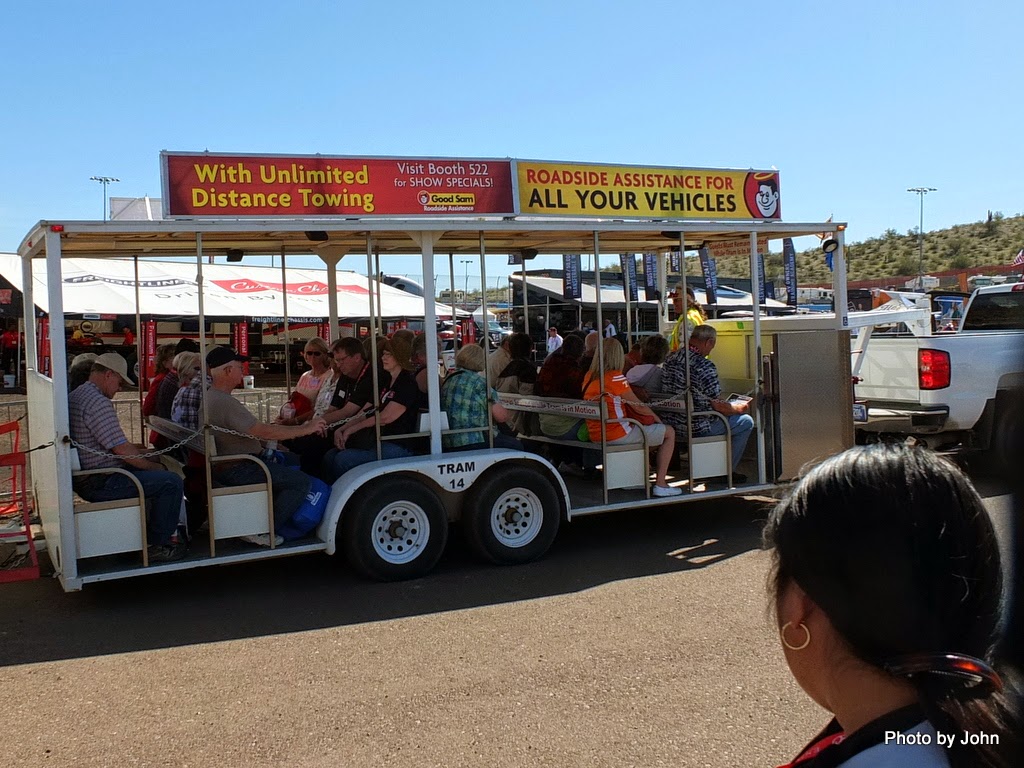 There were shuttles running between the show and the parking / camping, with eleven stops along the way. 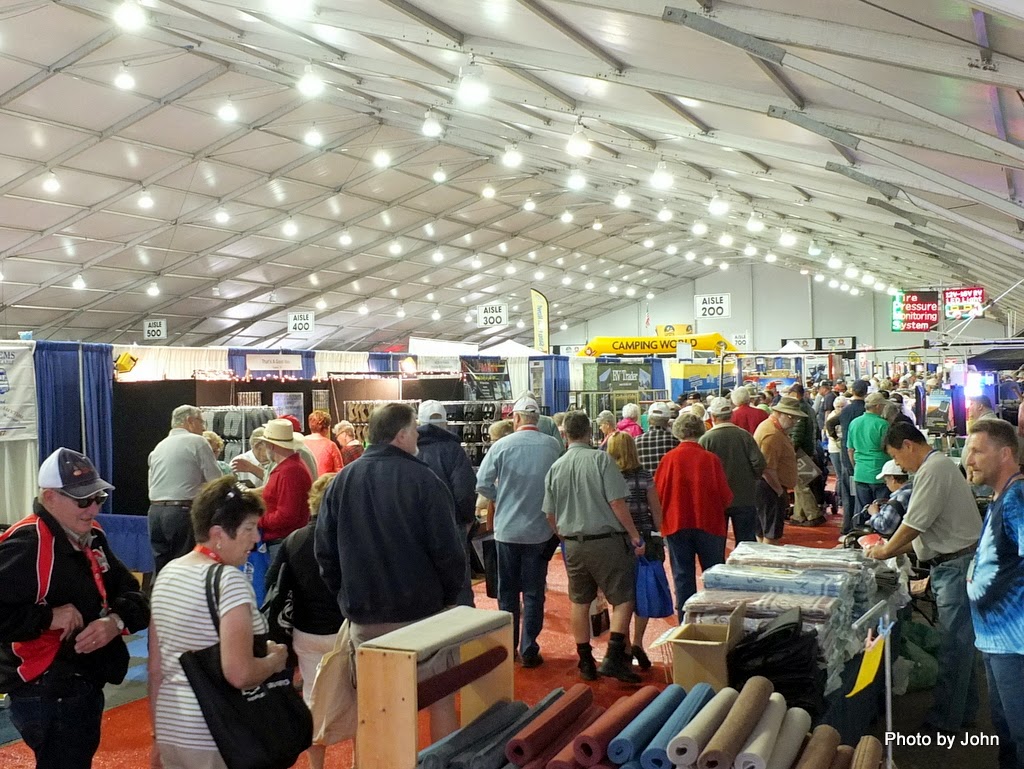 The big tent was similar to Quartzsite. I wondered if it was the same tent. It was supposed to open at 10 a.m., and when we walked in the door (at 10 a.m.) it was already crowded. 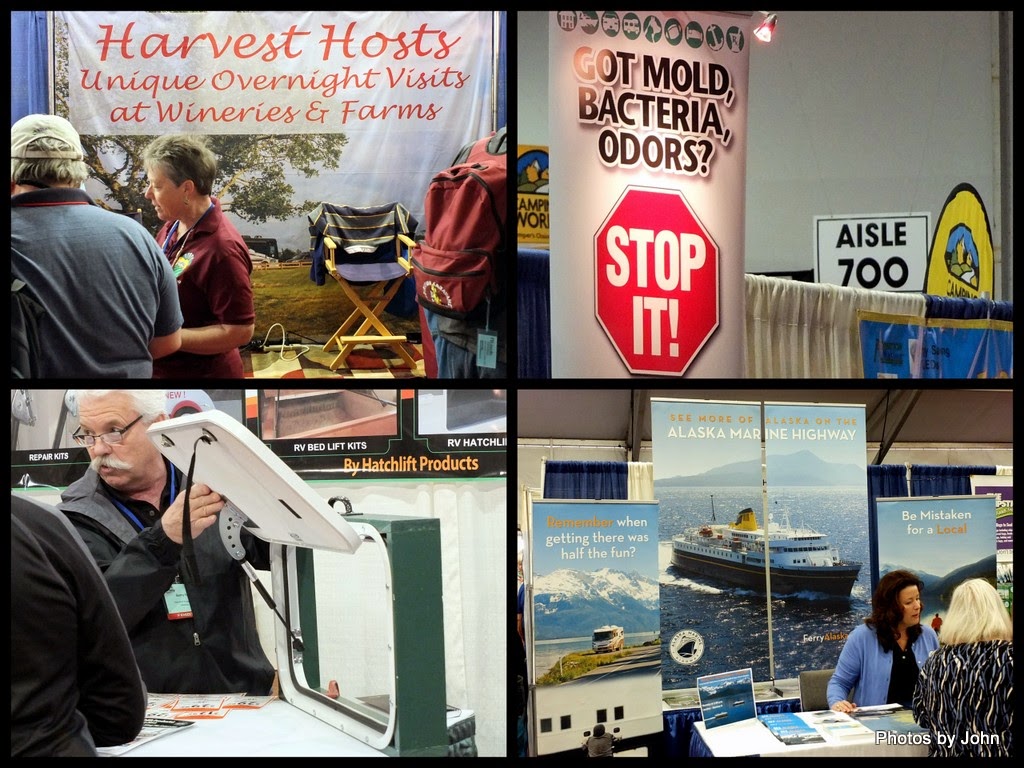 There were many of the same vendors that you would see in Quartzsite, but the tent was definitely more RV oriented than what Q has become. I didn't see any message booths at this show. 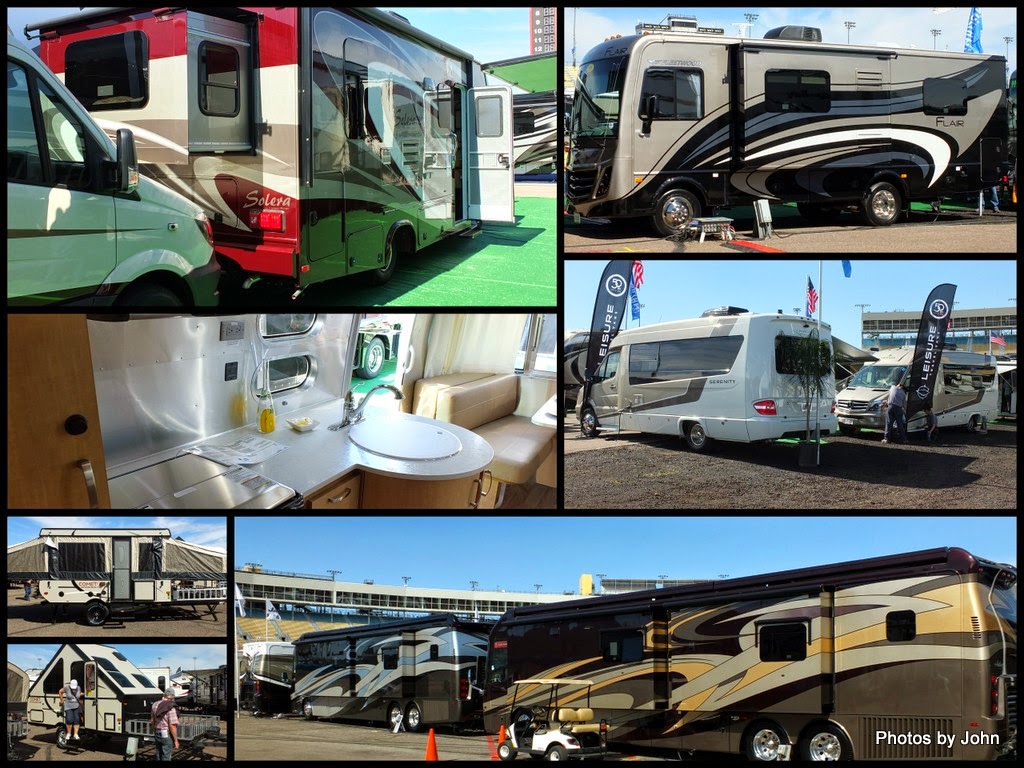 Outside were clusters of RVs, organized by brand, with those sold by Camping World closer to the big tent and other brands further away. One tent trailer, one hardshell popup, a few Airstream, several brands of Mercedes powered small Class C rigs, a few small Class A rigs, but mostly beast-sized Class A rigs and large 5th wheel trailers. 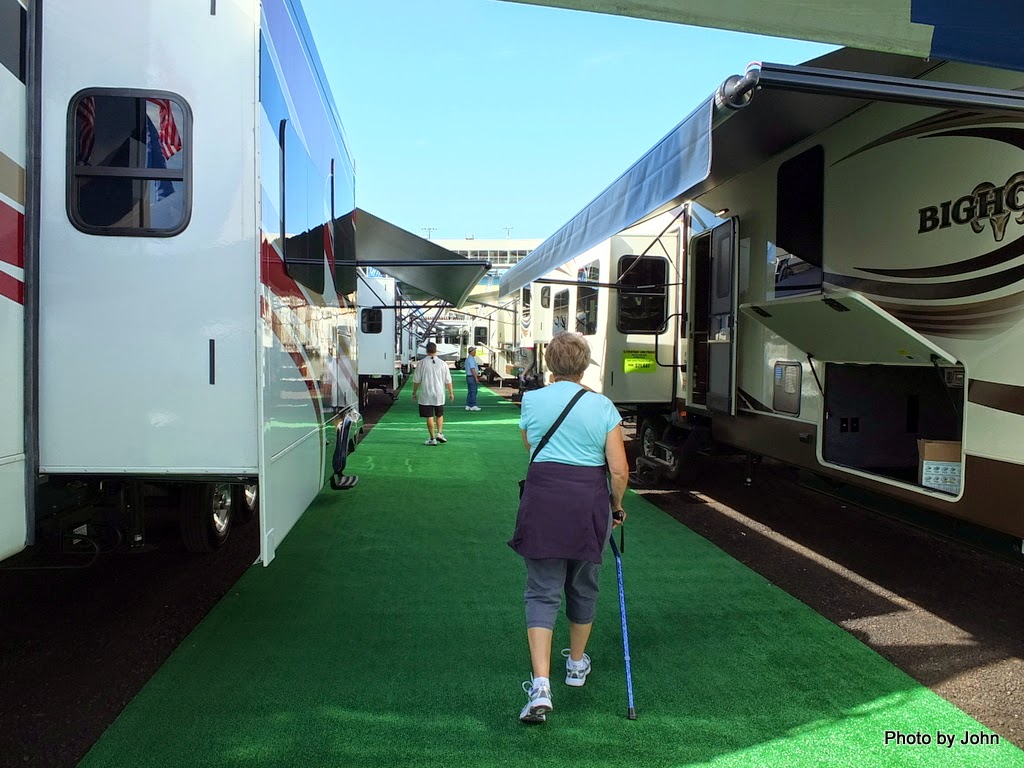 We really came to wander through 5th wheels, looking to see if anyone was making something in the 25 foot range. We started wandering through the Heartland RV section since it was near the tent. 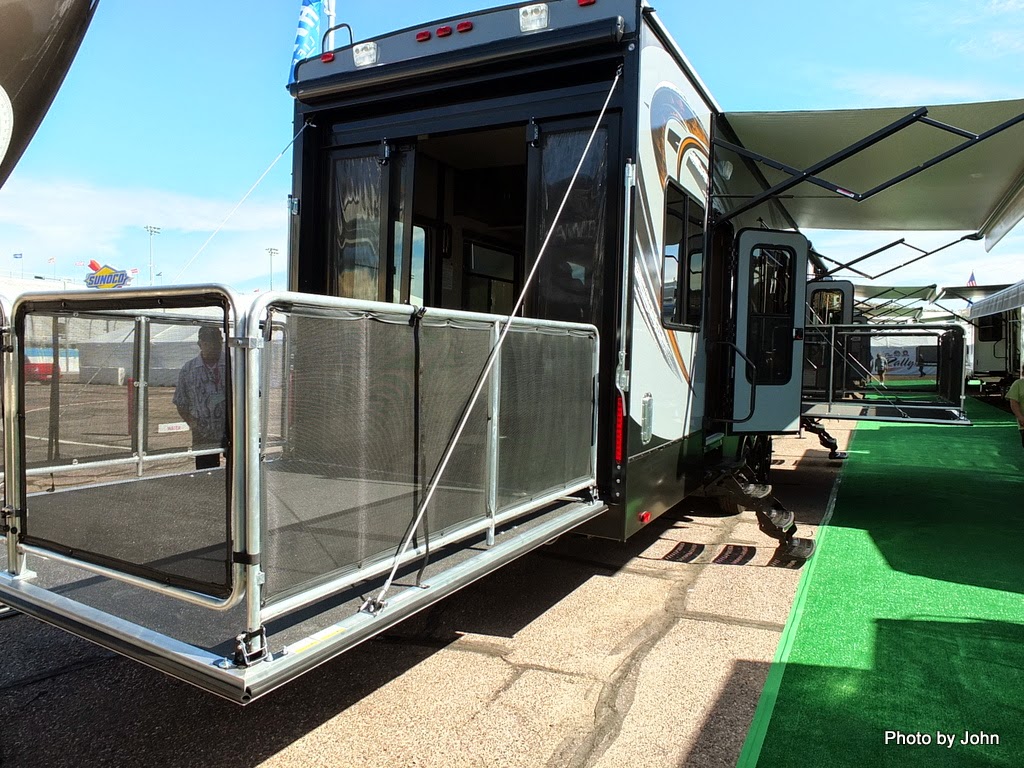 BJ loved the double patio arrangement on the Cyclone toy-hauler, but at 44' long and very nearly 16,000 pounds empty weight it was certainly not anywhere close to what we wanted to see. 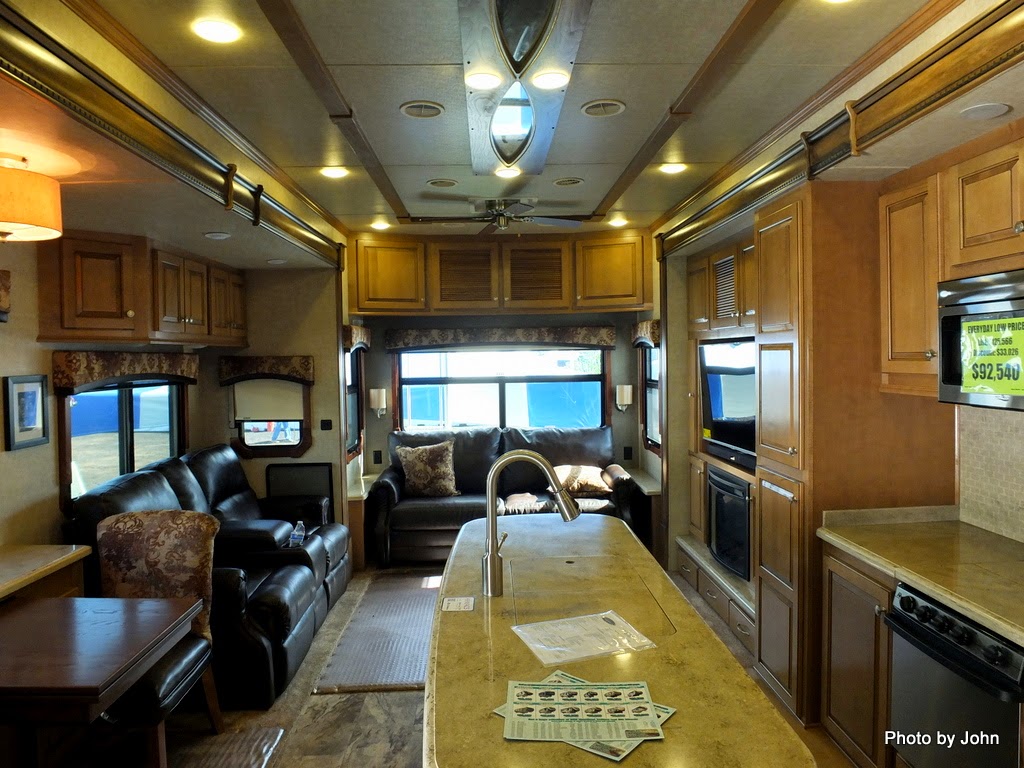 We stepped into one of the Landmark 365 models. It was beautiful, but was very nearly as heavy and large as the Cyclone, and was essentially unusable with the slides in. So much for overnighting at Wallyworld. Many of the trailers we saw had this fatal flaw. An amazing number had residential 110v. refrigerators. So much for economical boondocking! 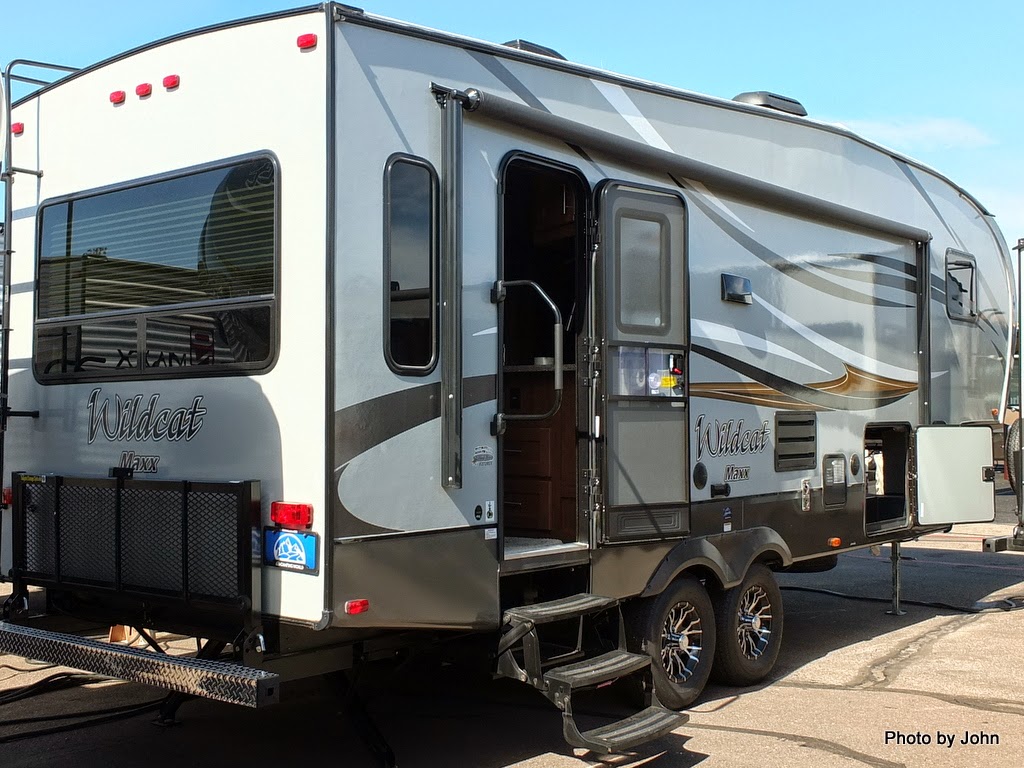 One of the sales people told us to check out the Wildcat Maxx because it was a "compact 5th wheel." The smallest one they had at the show was over 31' long. It did have some nice features but wasn't available with thermopane windows, and it was still significantly larger than what we wanted. 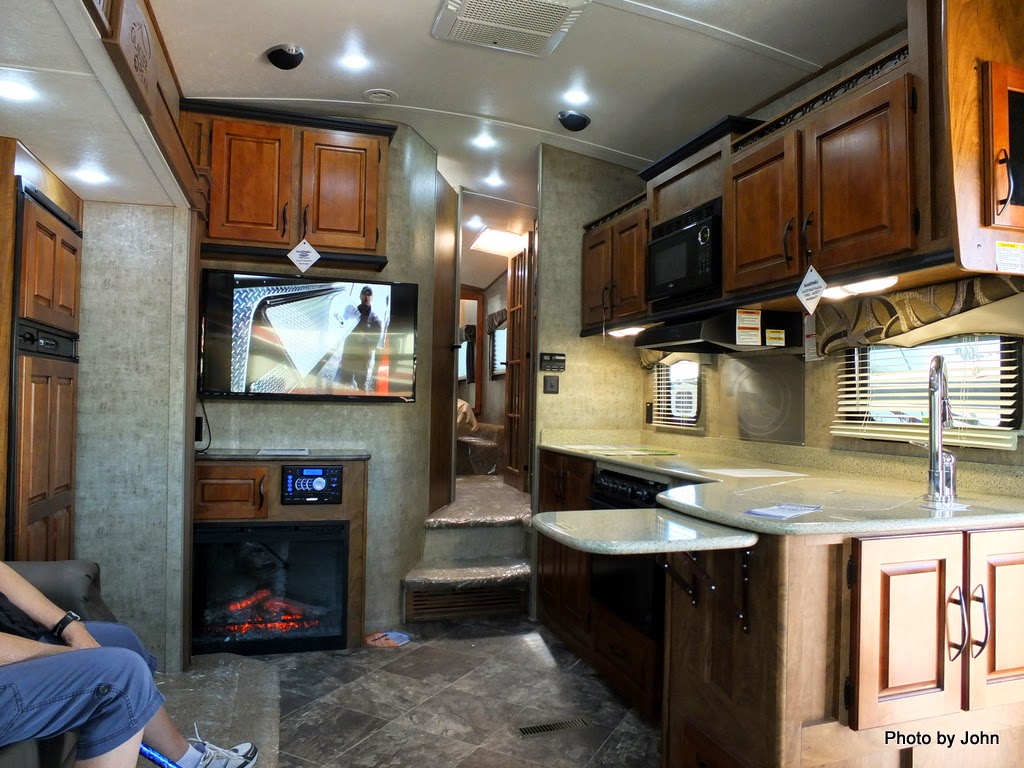 We spent a lot of time in the Glacier Peak Kokanee by Outdoors RV. The layout was very nice with a large dinette at the back, leveraging the potential view. Thermopane windows were available, but in a package that included the massive TV and fireplace. The trailer was accessible with the slide in, but the fridge was located in the slide which suggests it may not vent well. 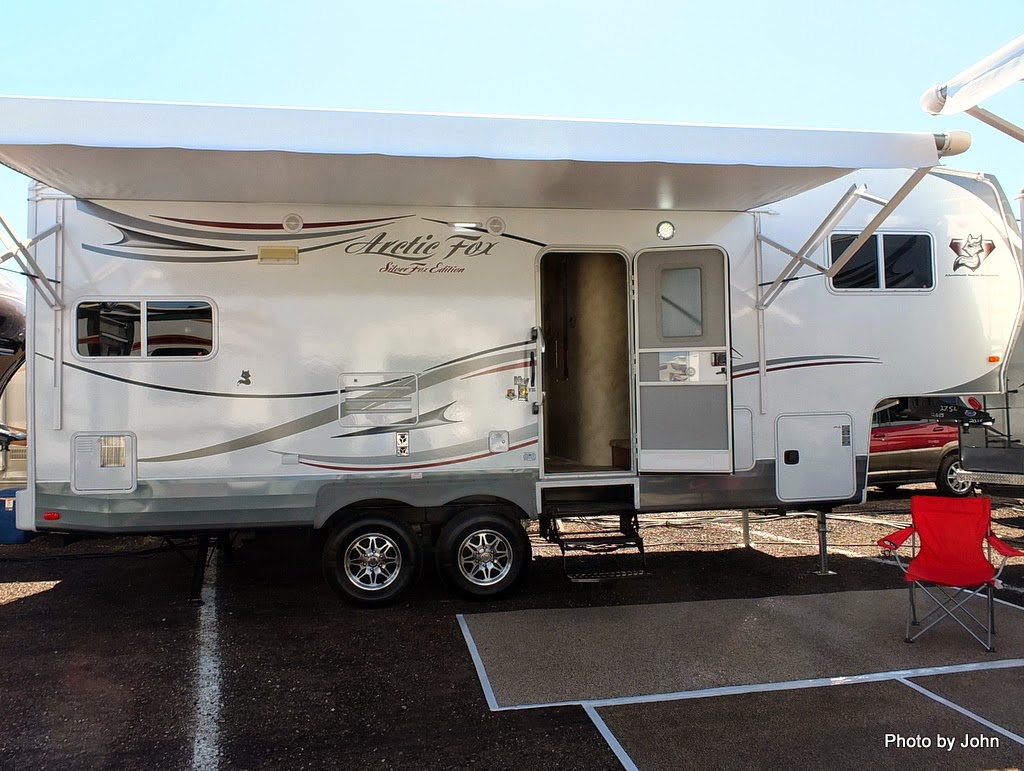 We looked at both the Fox Mountain 235RLS and the Arctic Fox 27-5L - both made by Northwood Manufacturing. The Fox Mountain came closest to our target size at 27 feet, but the shower and sink were incorporated in the bedroom. The Arctic Fox was 29' but you had to go 4' longer to get a rear living room in an Arctic Fox. 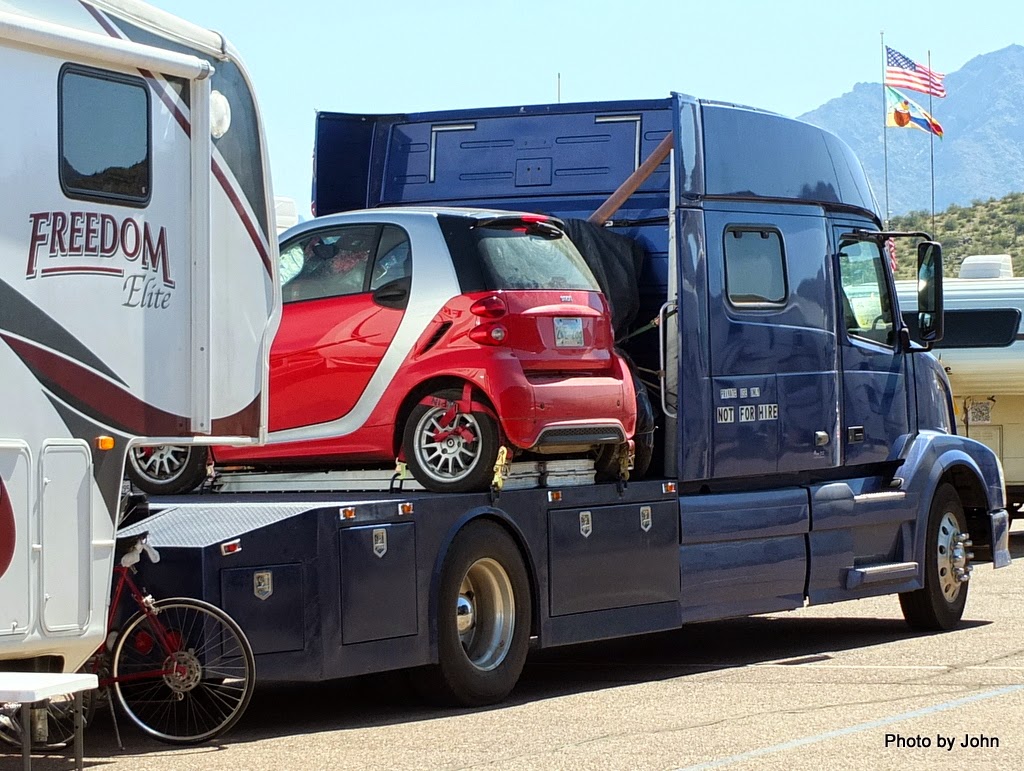 In the end, we decided it would be smart to continue enjoying what we have instead of getting getting a larger trailer and being forced into a larger tug.

Less than four hours at the rally was plenty for us!
Posted by Just Finding Our Way at 2:30 PM