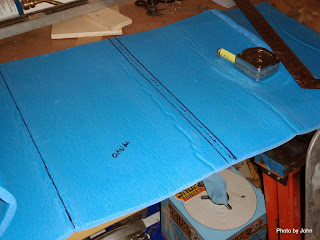 We've experienced occasional significant sweating of the water tank, resulting in water on the floor of the hatch area. We've confirmed it isn't a leak, and we've confirmed it is condensation. This is our first attempt to reduce the sweating. Using an old 3/8" thick, closed cell sleeping pad, I started forming a cozy for the tank. 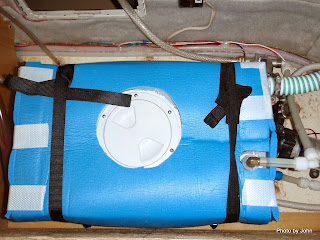 It would have been easier if the material was flat to start with, but I'd been unsuccessful in removing all of the curl from years of storage in a roll. 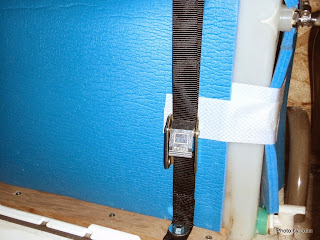 I thought of gluing the foam to the tank, but decided to wait and see if the cozy does the trick before semi-permanently attaching it to the tank. Meanwhile, the new straps and some hurricane tape is keeping it in place. I left one corner of the tank exposed so that I can see the water level in the tank from the outside hatch cover.