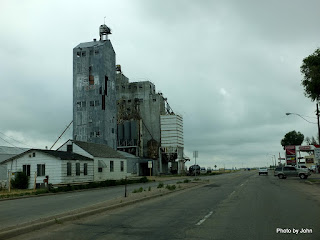 We left Cheyenne and headed for the plains. Towns almost always featured grain elevators and water towers proudly announcing the name of the town. 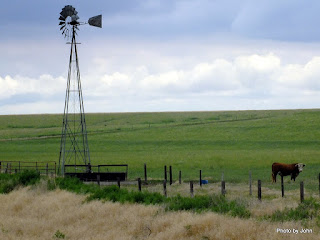 The weather had been stormy with lots of rain the previous night and continued threats of rain throughout the day. Some of the rolling hills were green with grass and herds of cattle. 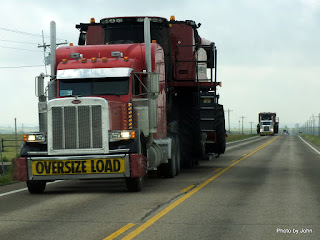 I'd hoped to get a classic photo of a phalanx of combines moving across wheat fields, but because of the rain, none of the equipment was operating. That didn't mean we didn't see lots of outfits on the road, headed to their next job, 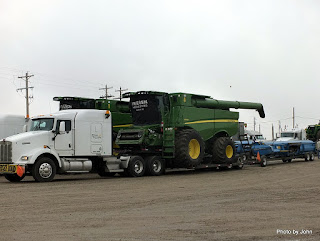 or gathering in the occasional truck stop. 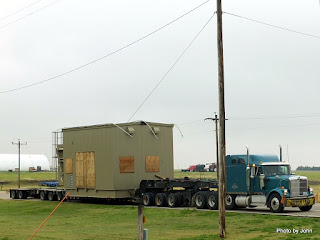 If it wasn't oversized harvesting equipment, it was oversized oil field equipment - at least I assumed that's what these rigs were. There were four of them, all moving together in a convoy. 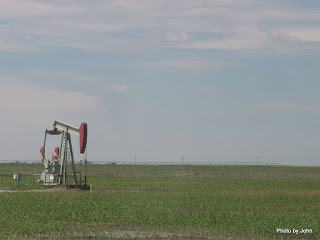 Oil wells were scattered with lots more space between them than is typical in Bakersfield, for example. Quite a few of them were not operating - waiting for better prices??? 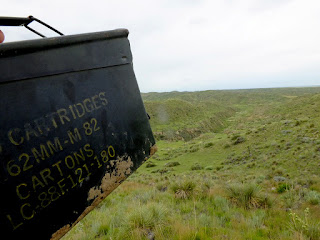 Yes, there was geocaching involved. Kansas has a couple caches that were placed in May, 2000 - the month that geocaching started. We saved a bunch of miles by visiting Arikaree (GC31) although it did involve 18 miles of gravel road. The gravel county roads in Kansas were MUCH better than the asphalt highways in Oklahoma... 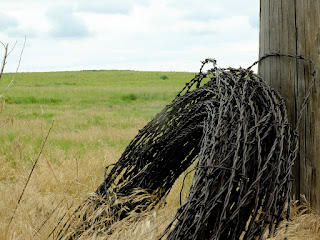 I loved the rolling hills and well kept fields. I felt for the farmers who were waiting for drier weather to continue their harvest. 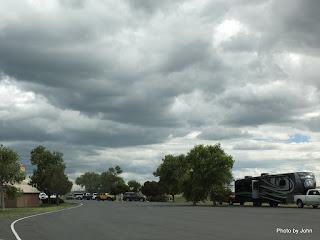 We stayed one night in the Walmart parking lot in Goodland, Kansas.  The next night was at the Sierra Grande rest area southeast of Des Moines, New Mexico after touching four states that day. Meanwhile, the weather remained very breezy with occasional showers. 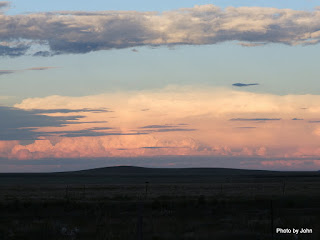 In spite of the threatening weather, we got a beautiful display of sunset colors reflected off of the clouds to the east during our New Mexico evening. 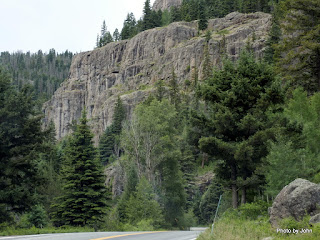 There was just one more hurdle to cross. Wolf Creek Pass needed to be surmounted. This was the second time we'd trailered over the pass with our Tacoma, but the first time with the Scamp. Turned out to be easier  (at least from east to west) than several other places we'd been on this trip.