Living the Life of Riley 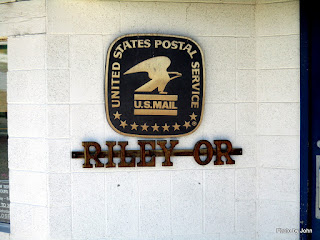 My Dad always mentioned "living the life of Riley" when he saw someone enjoying what they were doing. I never knew who "Riley" was, and the only Riley I know was born after Dad passed away so I'm pretty sure that's not the Riley he was talking about. I had to stop in Riley, Oregon to see if they knew Riley. 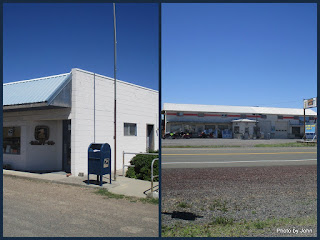 Turns out, there's not much to Riley. A Post Office on one side of the road (closed) and a single large building looking pretty forlorn on the other side of the road. Not much help with my Riley question. I tried... 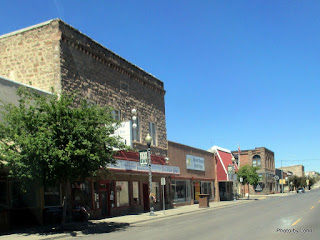 If you look at a map, you might wonder why we're going east when we intend to eventually end up back in Arizona. It's simple. The driver is trying to avoid heat as long as possible, somewhat unsuccessfully, I might add. I'd heard there were Rocky Mountains out there to be found.

The towns had lots of character, and most of them also had lots of storefront space available. 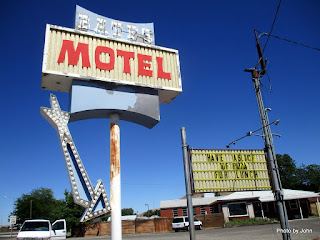 Kate, our British voiced GPS, seemed to think that I should know about the Bates Motel. I didn't, but we (read BJ) did some research. Turns out it was used as the settling for some psycho movie. No wonder I didn't know about it! 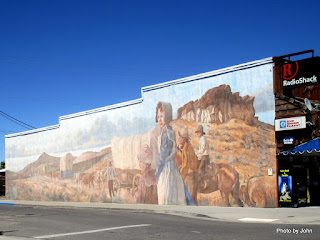 Oregon really leveraged the Oregon Trail. They're still getting mileage from it. Murals, historical  markers, various claims to fame.

I'd planned to Wallydock in Ontario, Oregon but it was HOT so we pulled an ace out of our sleeve. 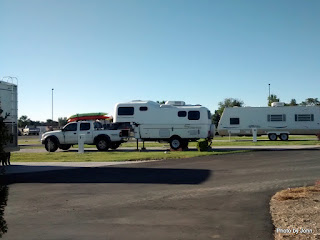 In a previous life, I was a helicopter maintenance specialist with Mission Aviation Fellowship. They have a very nice RV facility at their headquarters that's intended for housing volunteers, candidates, etc. I called "people I know" and was able to snag a spot for the night so we could power up the air conditioner. Nice! 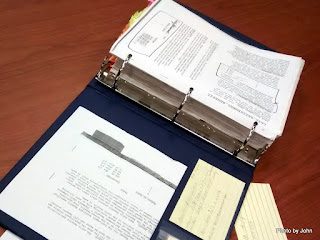 The next morning, before leaving, we wandered through the office to see who we might know. While we were at it, I stopped to check and see if our name was in "the book." Yup, turns out that small retirement benefit they told us about does exist. 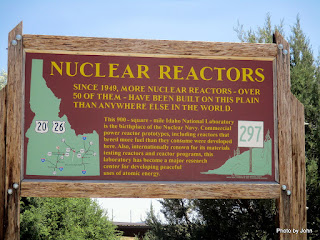 As we wandered across Idaho, we found lava flows, moon craters, and a place that specializes in custom nuclear reactors to power your boat. If you need to ask the price, you can't afford one. 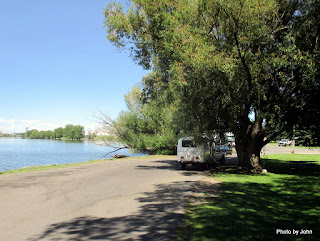 Home for the night was the South Tourist Park in Idaho Falls. Nice view of the Snake River, and a lovely shade tree to snuggle under. Unfortunately, it turned out to be a place with lots of all night traffic. Seemed like a good idea, but we won't stay here again.

As for Riley, some would suggest that it's unlucky to speed through and not pay your respects.