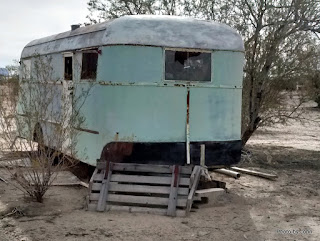 A couple weeks ago, after BJ & Jeff left, I continued some low key trailer shopping. We'd already looked at new stuff and didn't find anything we liked. When I spotted this one, I had to stop and chat with the caretaker for a bit. At first, I thought it might be an 1940's Westwood, but the more I look, the less I'm sure. 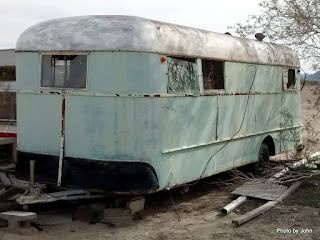 The repaint is long faded. The trailer had been on this property for decades, used as a desert cabin. 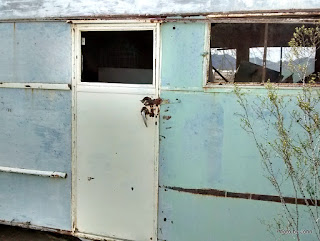 It has air conditioning. I think that's what they call the broken windows. The door is a suicide style which is appropriate to the vintage. 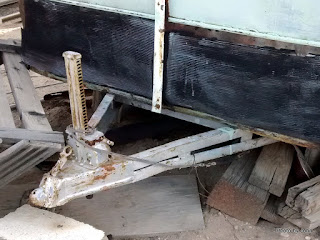 It comes complete with a 'retro style' tongue jack that will look really cool if it can be resuscitated. 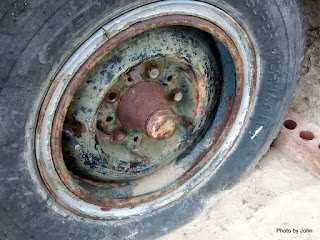 I was especially enamored with the 15 inch split rims, retained by a few bolts, but not as many as the manufacturer intended. The tires are very low miles and still have good tread, or at least that's what the Craig's List ad would say... 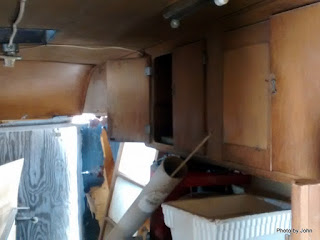 There was still some interior in place and that's where I started questioning my Westwood theory. These cabinets appeared to be built from fir plywood rather than birch. 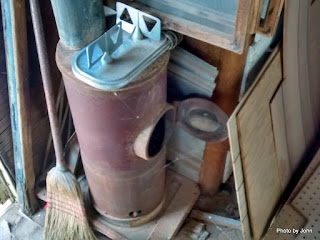 It does have a cool looking, free standing, heater by the door. Not sure how long it's been since this unit was used, but the wind deflectors for the vent pipes are still with the trailer. 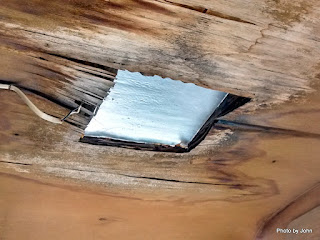 It's a bit of a fixer-upper. Needs some tender, loving care. Not only is the ceiling vent gone, but it's leaked enough that the ceiling is gone and I suspect the framing is as well. 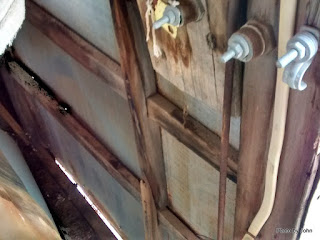 Near the door you could see daylight at the bottom of the wall, and see where the wall framing was cracked in a few places. It think this project could best be called a "frame-up" restoration. 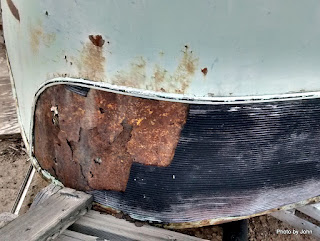 One of the reasons I don't think it's a Westwood is that they were all built with aluminum. This is clearly not aluminum... 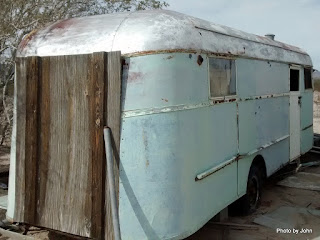 And did I mention that it's a toy-hauler? At some point after they quit using it as a cabin, they removed the rear panel to provide a larger access area, 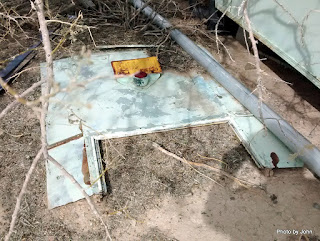 But the panel and window frame are still there, complete with an old California plate and the single brake/tail light.

This could prove I'm certifiable, but it sure looks like fun! No title and an unknown brand, but it could be configured however we want it. I think I'll go back to see if they'll pay me to haul it away. Or maybe I should get in line to put a deposit on an Escape TA...
Posted by Just Finding Our Way at 2:30 PM