While I attended the Yuma Mega Event for geocachers, I took part in several activities that had some real or inferred contest component. I was not trying to get First to Find on any of the special "lab" caches or the complete series of seven. After the fact, it was obvious that a number of the local cachers were competing for FTF honors. I got a good night's sleep and was 12th to complete the series out of 382 as of Sunday evening. 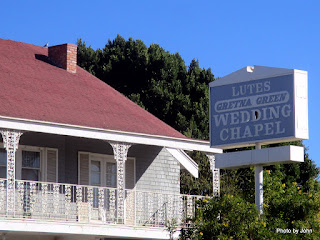 On Saturday, I took part in a "Yuma Discovery Series" that involved locating a number of actual caches as well as other locations in the community where you would learn something about the community, such as one of the places that attracted Hollywood folks. 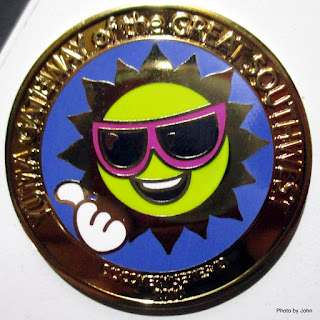 I was lucky to finish that series since I make a transcription error entering the waypoints and was over 8 miles off, fighting my way through a tamarack jungle when I decided it was time to go back to the truck and double-check the figures...

I managed to finish that series about 30 minutes before they ran out of the geocoins that they gave out for completing the series. 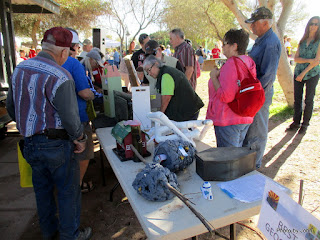 The contest that really intrigued me was the cache building contest. It had to be homemade and it had to be "legal." This was the first year they've had this contest and there were only 15 entries. I know there will be a couple of us giving real thought to designs for next year. 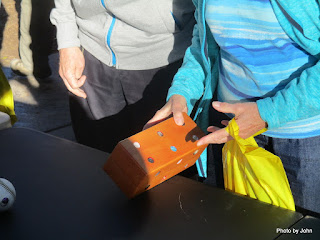 I entered my button cache. It was interesting to observe people with it. A few would immediately figure it out, most took longer than I expected, and I was amazed to see a few walk away frustrated by it. 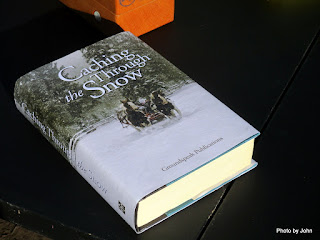 The one I liked the best would be challenging to use in the real world. You'd need to find a library that would let you shelve it. The inside of the book was hollowed out to create the cache space. A simple concept, but the cover and flyleaf would easily pass for legitimate, commercial work. 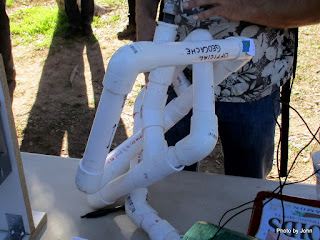 I just happened to have pictures of those that were selected for the top three places. This one came in third. 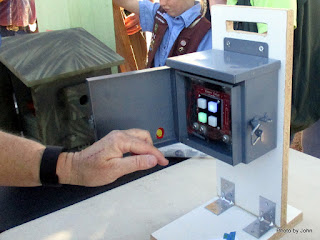 The birdhouse in the background used a jack-in-the box mechanism to release the door. It came in second place. The one in the foreground used a modified "Simon Says" electronic game. If your memory was good enough to complete the long sequence, it would release the cache.  It was the first place winner. 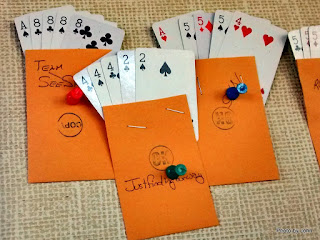 They had a poker run where you had to locate five caches and select a sealed envelope from each cache. My fours and twos eventually came in third place, winning me $100. Not bad for an event that had no entry fee!
Posted by Just Finding Our Way at 2:30 PM