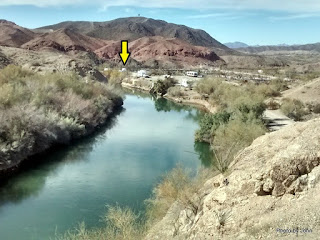 I spent 10 days camped on a low ridge sandwiched between a canal on one side, and Mittry Lake on the other. I ended up with some neat neighbors but didn't spend much time with them since my reason for being in the Yuma area was the large Geocaching gathering that was being held in town. 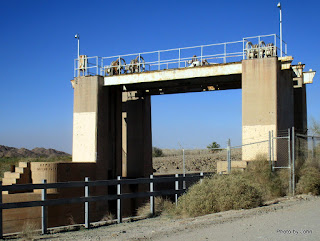 Mittry Lake sits in a marshy area along side the Colorado river. It's home to lots of wildlife including the coyotes that serenade me early every morning. The lake was created by installation of a gate that controls water flow into one of the many canals that provide irrigation for area farmers. The canals also make it nearly impossible to go anywhere in a direct line. 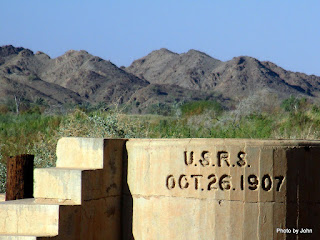 I thought it was interesting that they cast a specific date into an object that clearly took a while to build. This picture is simply a section of the lower left corner of the previous picture. About the same time, they built a bridge nearby that was decorated with swastika. I heard an explanation once but I shook my head since then and now I can't remember the explanation. 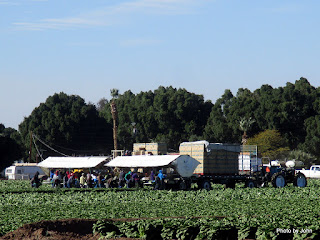 All around Yuma are wide open fields growing vegetables. Right now it seems to be many varieties of lettuce. Every back road had buses of laborers shuttling from one field to the next. Hard work so we can have fresh vegetables. 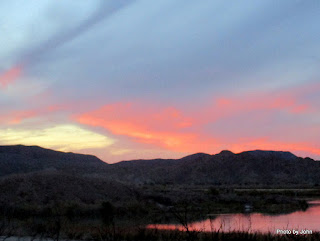 The other thing that southwest Arizona is known for are the sunsets. This was the sunset the first day I was here, casting a colorful glow on the lake. 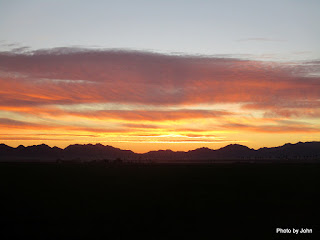 Once you got away from the hills around the lake and out into the farmland, the sunrises were pretty special as well. 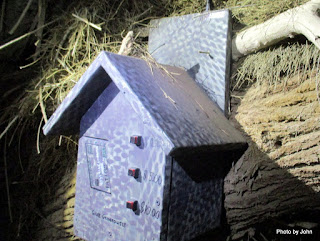 I did a couple special series of caches while I was here. The "Lab Caches" apparently don't have to abide by the same placement rules that apply to regular caches. A couple of them were pretty neat, but most were average in my opinion. 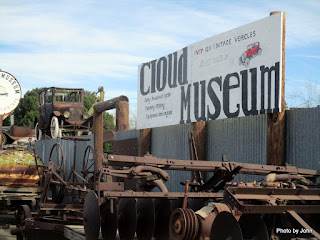 The nice thing about the Discovery series of caches was that they intentionally took you to different areas around Yuma. In the process I founds a rust museum north of Bard, California that looks much more interesting than the Castle Dome museum - I've got to go back to spend some time there. Castle Dome on the other hand, had too much Disney for my taste and didn't rate a blog post.