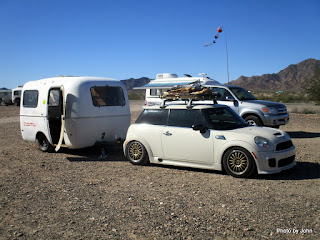 With the Quartzsite Gathering expanded to a whole week, it was fun watching it change. You never knew what was going to pull in next. I think that this Mini towing a Scamp 13 got the prize as the smallest egg combo, edged out only by the molded fiberglass teardrop that I had in my February 16th post. 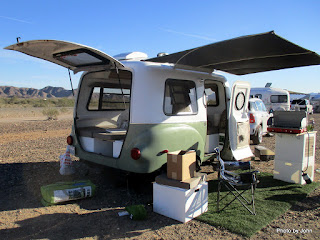 Happy Camper was there for a couple days with both of their prototype / display trailers. He reported that they've delivered 17 trailers so far. This new design is 13 foot but includes a "toy hauler" door and an interior that is totally reconfigurable based on square plastic cube containers. Their second trailer featured a large opening side window for use as a food service location. 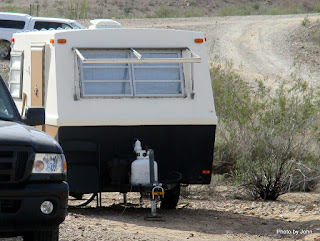 The solitary Vagabond from Manitoba was back this year. 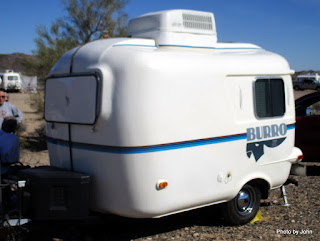 There was a single Burro in attendance, sporting Arizona plates and a roof top air conditioner installation. 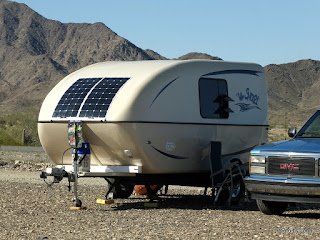 Dave and Paula were there with the only Lil Snoozy, complete with solar and LP. 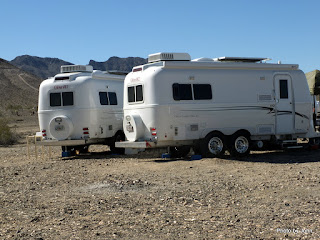 For part of the week, the three Olivers were holding up the big end of the spectrum with several Escape 21s and a couple Big Foot 21s until a Big Foot 25 from Ontario pulled in and parked next to us. They were then trumped for the biggest trailer honors by a 28' Big Foot SilverCloud from British Columbia. The owner says they only built 13. I know I took pictures but I'm now in Flagstaff and they're on my "big" camera at home. 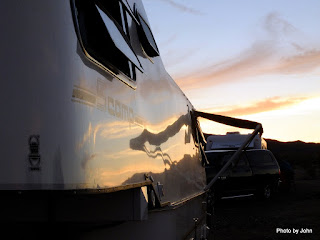 Dates for next year have been set. Officially, the 10th Annual Quartzsite Gathering will start on Monday, February 6th through Sunday, February 12th although I suspect there will be people starting to gather as much as a week earlier.
Posted by Just Finding Our Way at 2:30 PM