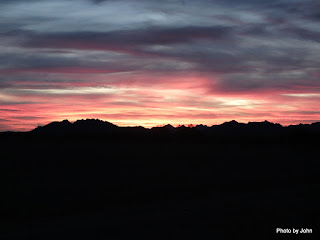 Quartzsite is known for its sunsets. Here's some proof that the sunrises are pretty spectacular, too. With Jeff back in the 49th State and BJ at home, I headed out early to try to finish a series of caches related to various Arizona Ghost Towns. I needed the early start because I had other things on the calendar. 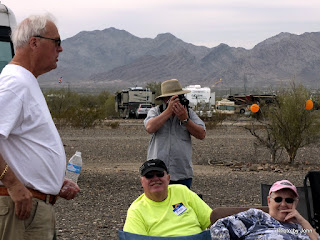 Last year, some folks organized a BloggerFest since there were quite a number of travel bloggers in Q for the RV show. This year, I made sure that my calendar remained open so that I could attend. Al, of the Bayfield Bunch is behind the camera. 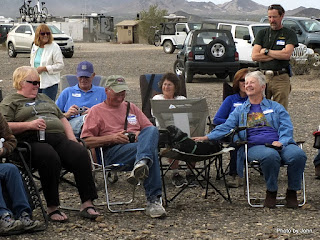 I took this picture because Sally had her own seat. Turns out, there are three blogs on my sidebar that are represented here. Jerry (red shirt) writes EggRollings. His wife, Wanda, is keeping Sally happy. Behind Jerry is Mark of Box Canyon Blog and his wife. Hiding behind Wanda is Suzanne of Take To The Highway. Also represented is Toni of Palamine, and Ivan (standing RR) of Roadtrip 2016. He works fire lookouts during the summer. 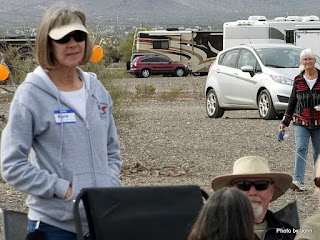 Gayle (standing) and Jim of Life's Little Adventures were hiding in the back row. They, along with Mark & Bobbie, and Suzanne, are hard core Southern Utah hikers and bikers.

There were at least three other bloggers I regularly read that were in town, but didn't attend. 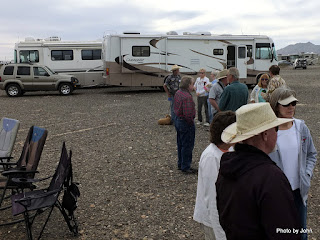 Everyone brought chairs, but once introductions were over, the chairs were forgotten as people mingled, chatting with long time friends and meeting new ones.

I got a chance to chat with Lynne and David of Winter in the Desert, Summer in the Mountains (but didn't get a picture) and a number of others. 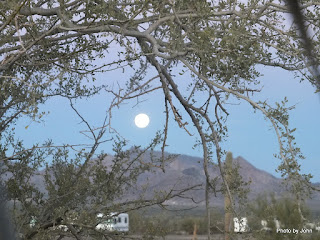 Sunday morning I was out before daybreak adding to my First To Find list, and then back to make a cup of coffee and watch the moon set through the ironwood tree. 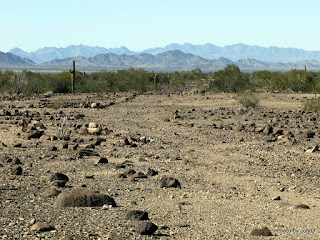 Although I've been coming to Quartzsite for several years, geocaching took me to a couple interesting spots. This area was used by Army troops training for General Patton in World War II. You can still see the outline of streets framed with rocks in the desert east of town. 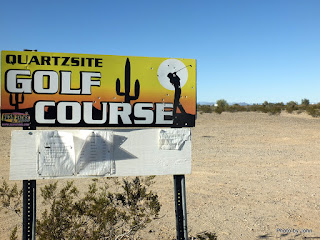 And its clear (if you click on the picture to get the larger version, what the pastime in northwest Quartzsite might be. The sign is obvious, but it appears target shooting with a .22 might be the more popular hobby. This is the second sand/rock golf course that I'm aware of in the area.

Next stop, Yuma, for a week or so.