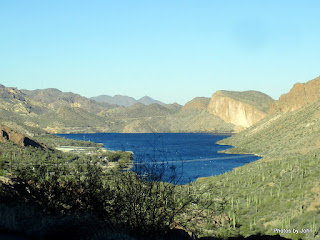 The alarm was set for 3:45 a.m. on New Year's morning to take Jeff and Spencer to the airport. About the same time e-mails started flowing in announcing new caches that had just been approved. Most were urban caches along busy roads, but one caught my eye. It was about 5 miles beyond Canyon Lake and almost a mile from road I was willing to drive. 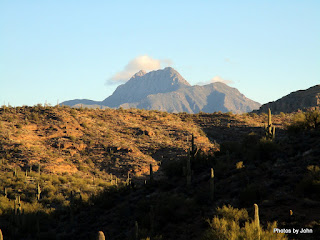 After  the sun came up the morning was cool but clear. The cache was in a location that I wouldn't have visited otherwise, sandwiched with a view of Four Peaks in one direction, and 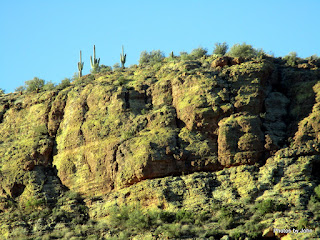 three Saguaro on a cliff off in another direction. The hike had its share of ups and downs which made for enough exercise to stay warm. The cache was well hidden and a good challenge to find, but find it I did. Another First To Find on the list. It was well worth the time and effort. 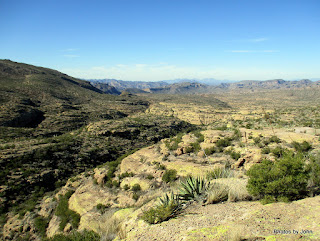 I had so much fun with that early morning hike that BJ and I went back the next day to chase other caches on the Apache Trail between Tortilla Flat and the viewpoint at the top of Fisherman's Hill. Another day of beautiful clear skies and interesting views. 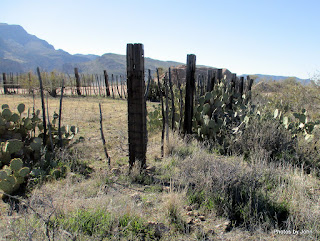 We stopped by 'the' corral to do a little hiking. It doesn't look like the corral gets used much any more. The chicken wire is reinforced with cactus. 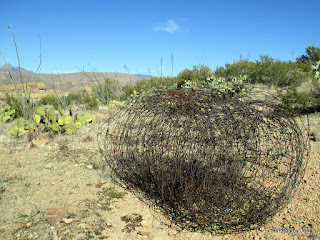 We were surprised to run across several rolls of "portable corral" in a wash. Not sure if they blew there or were dumped there. The other rolls aren't going anywhere soon with desert plants growing up through the rolls of fencing. 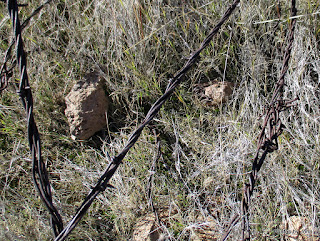 There was some barbed wire used in the corral, but it looked like it was all pieces too short to be used elsewhere. Lots of twists holding pieces of wire together. 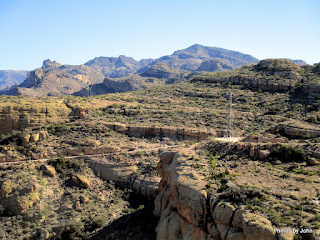 We did stop at the viewpoint at the top of Fisherman's Hill, but didn't continue further east this time because we were getting hungry.

(If you look close at the enlarged version, there's a black car about the middle of the picture, headed down the easy part of the hill.) 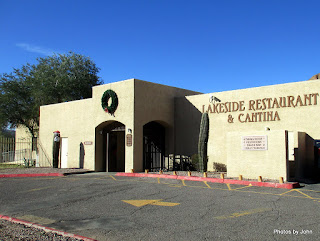 On the way home we stopped at the Lakeside Restaurant at the Marina for a late lunch. Apparently, we weren't the only ones eating a late lunch. The place was nearly full and the staff were running hard to keep up, but the food was every bit as good as usual.

While the weather has been cooler than normal, we've been enjoying time together and independently on the trails.
Posted by Just Finding Our Way at 2:30 PM