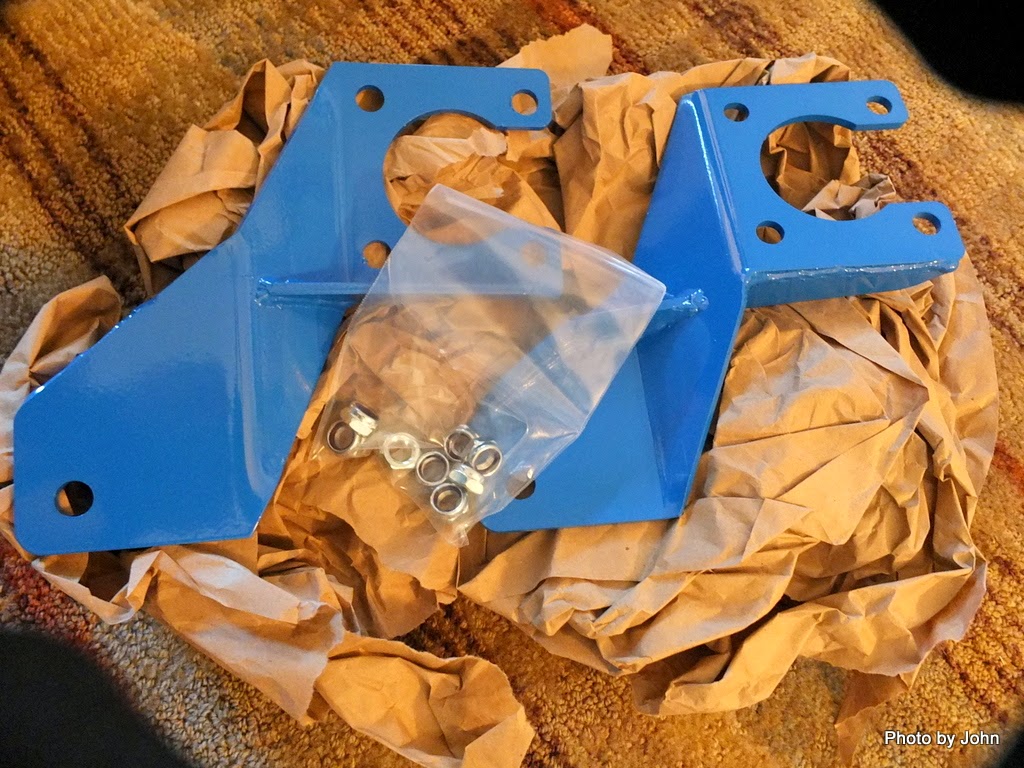 Over the years, I've considered various methods of installing shocks on the Scamp. At one time, Monroe made a bolt-on kit that used U-bolts to clamp the lower mount to the trailing arm of the torsion axle. Recently, Orbital Machine Works created a beautiful bolt-on kit for Casita trailers using the Dexter axle. It wasn't going to be a direct fit for the Scamp, but... 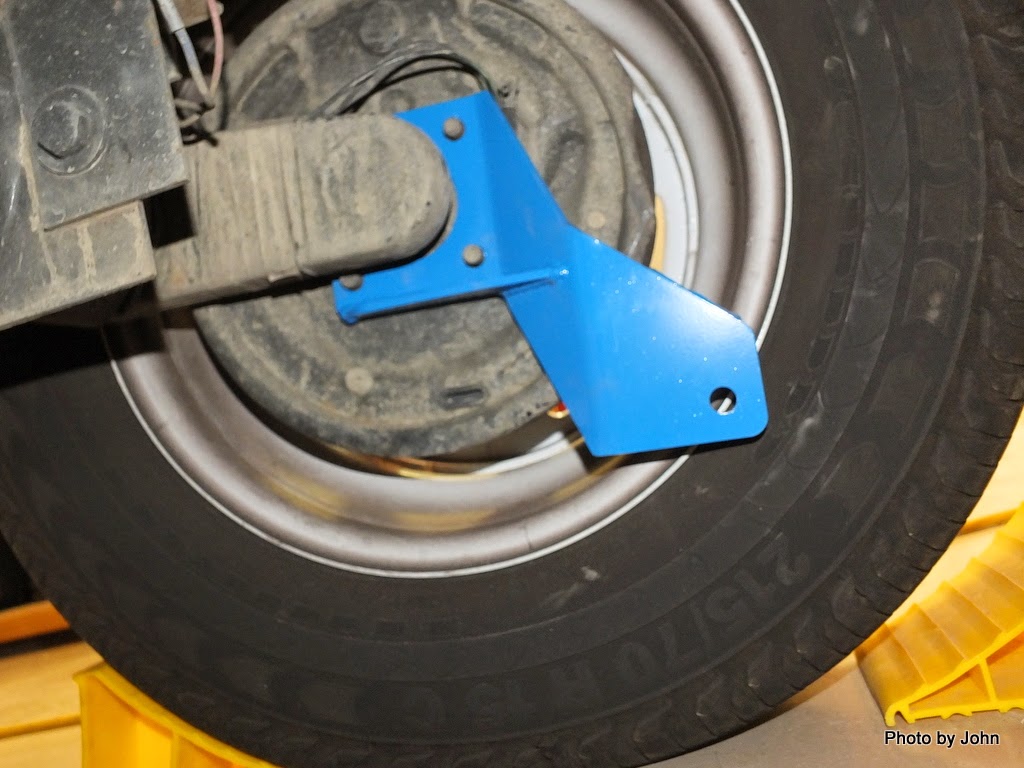 Orbital's lower mount attaches to the brake backing plate retaining studs. I installed the lower mount at the same time that I upgraded the trailer brakes. 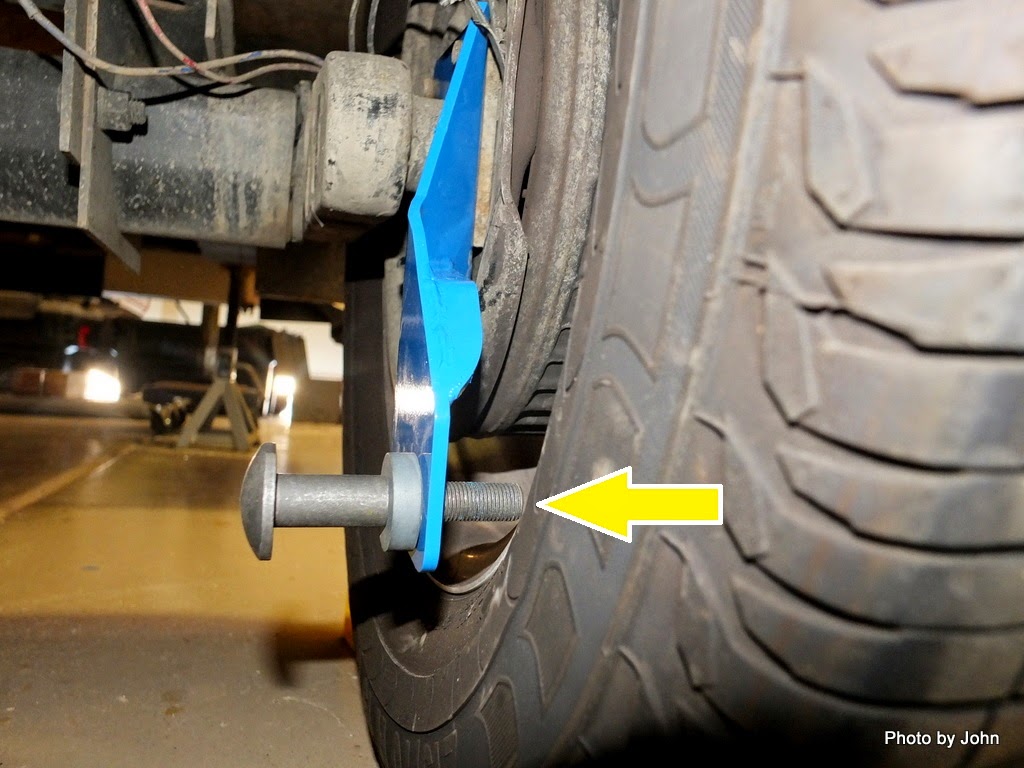 The shoulder bolt that ships with the Monroe 555003 RV shocks was going to create a tire clearance issue if left unmodified. 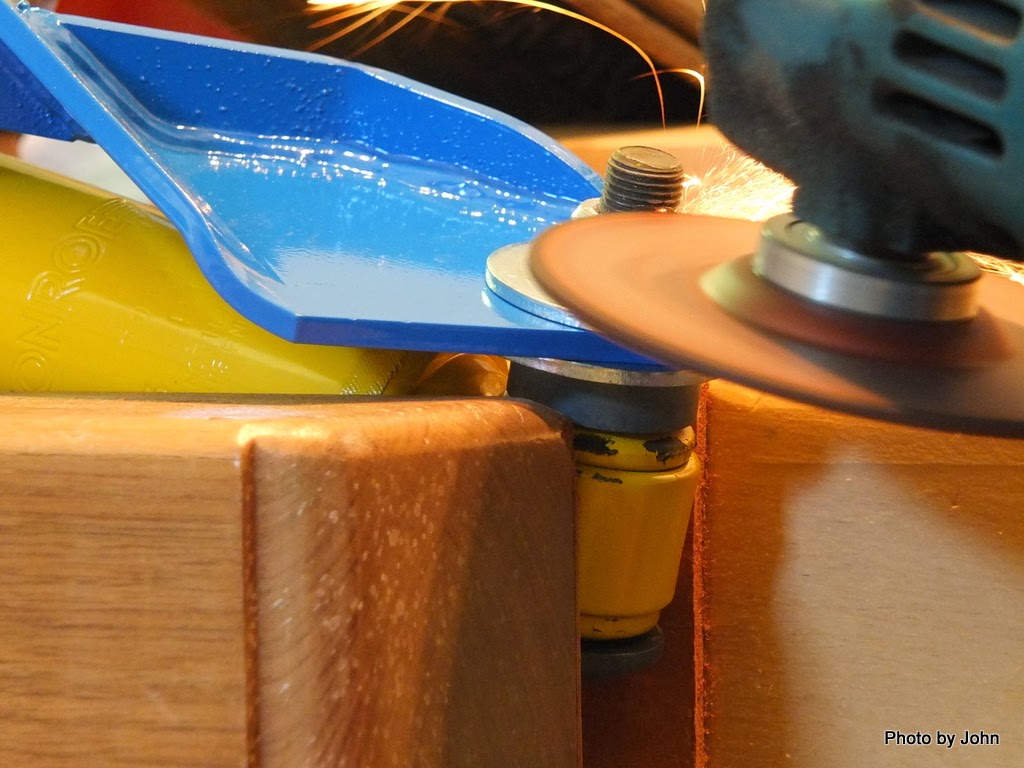 A cutting wheel made short work of the excess length. Turns out, I could have cut off even more but I have the clearance I need. 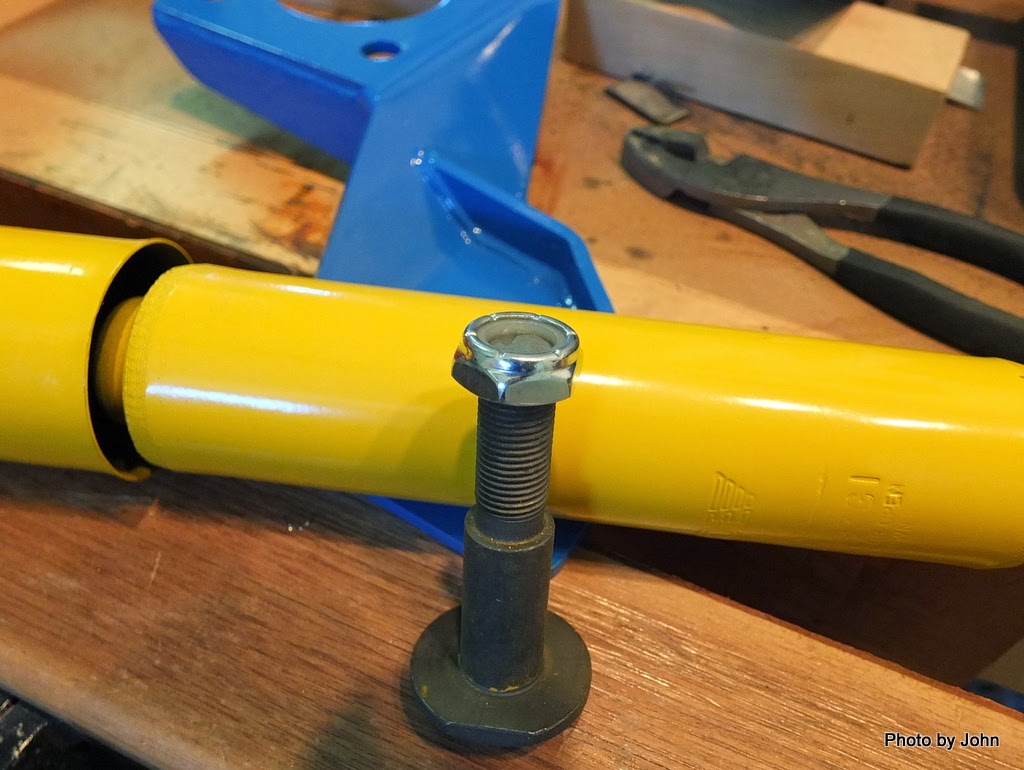 I did substitute nyloc shear nuts (thin) for the lock washer and regular nut that came with the shoulder bolt. 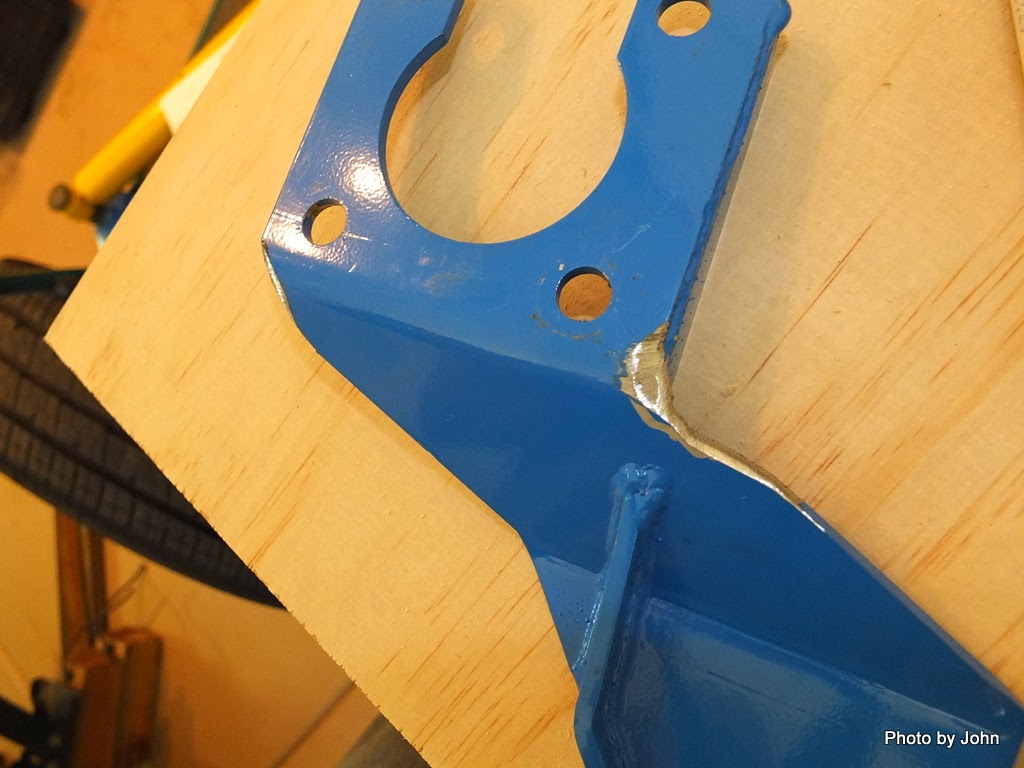 The lower brackets would have fit fine with the standard brakes. I had a bit of clearance problem between the bracket and the different recess on the right hand Dexter Nev-R-Adjust brake that I installed (but not on the left side.) Nothing a little time with the grinder couldn't take care of although it hurt to grind away that blue powder coat. 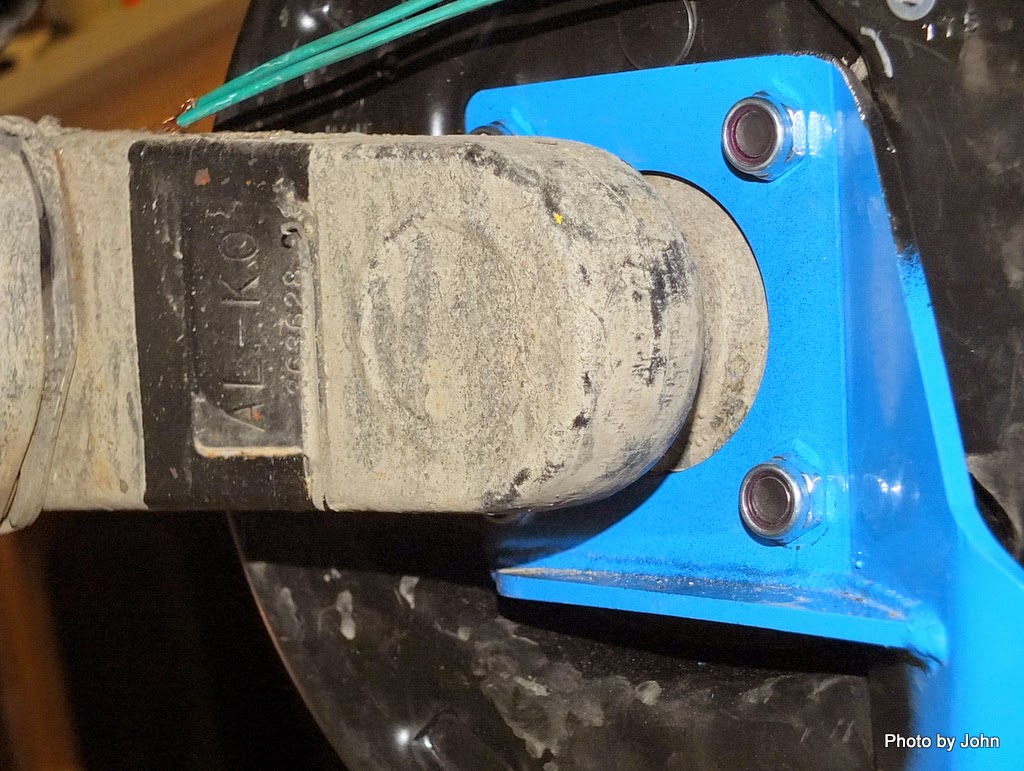 The bracket was mounted with nyloc shear nuts that were provided with the lower brackets. There was quite a conversation on the Casita Forum* about the use of shear nuts and thread engagement. For me it was a non-issue since the bracket interface to the studs is only in shear.

*This link will not work if you're not a Casita Forum member - sorry:-( 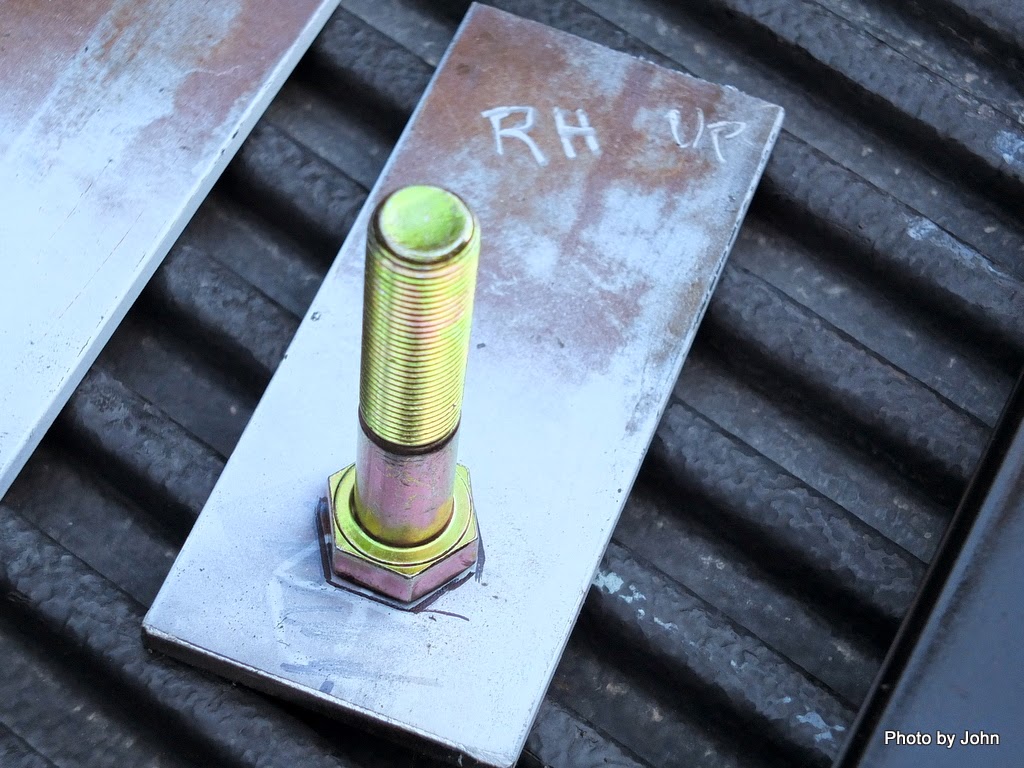 Since it was going to require custom fabrication to use Orbital's bolt-on upper mount that was designed (and works wonderfully) with the Casita, I elected to weld upper brackets. 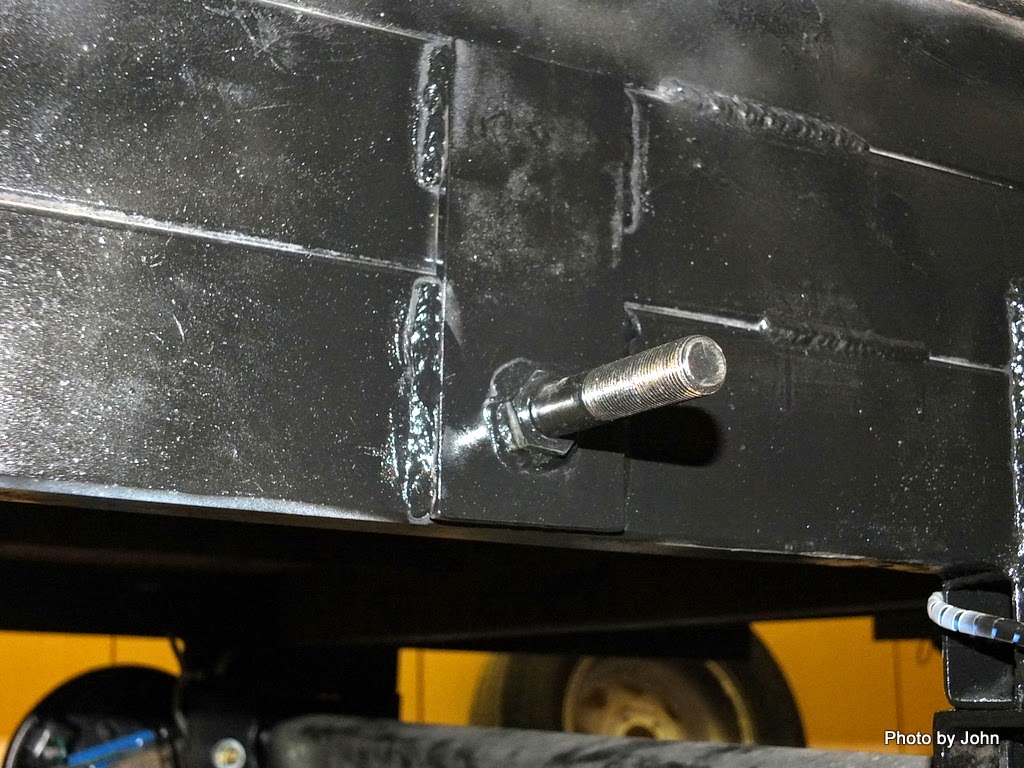 I had Cliff's weld the grade 8 bolt to 1/4" plate and then weld the resulting mount to the frame while they were doing the 2" lift. 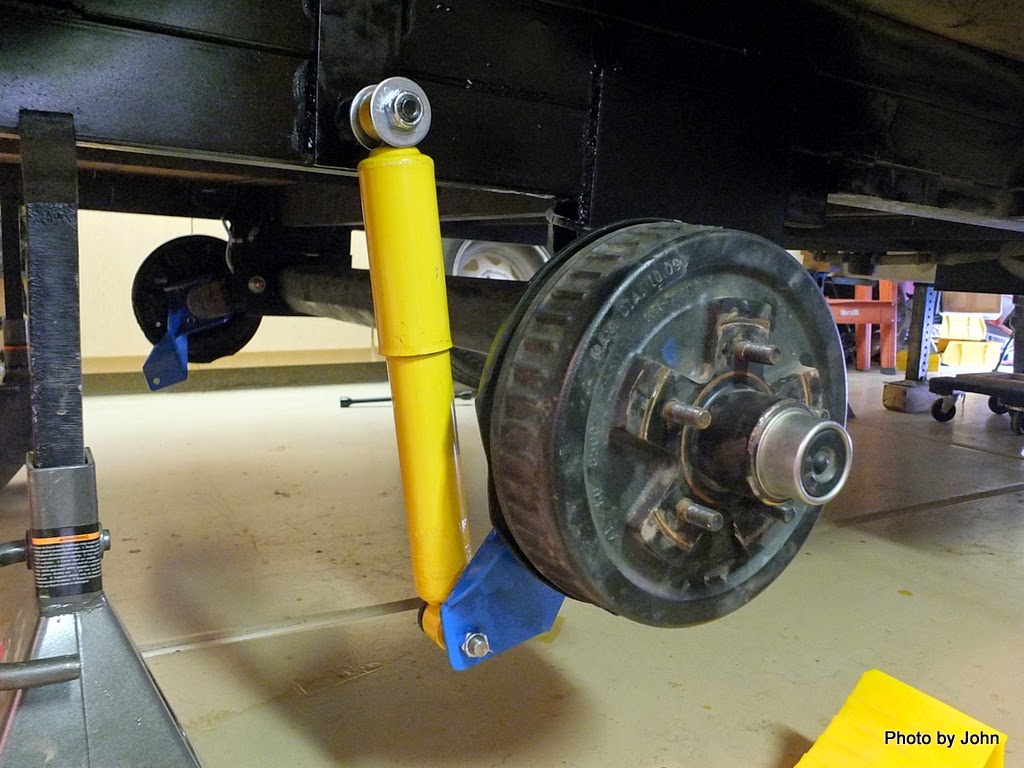 I was relieved to see that I had done my calculations the way I intended. I have about 1/4" of compression on the shocks with no load on the axle. 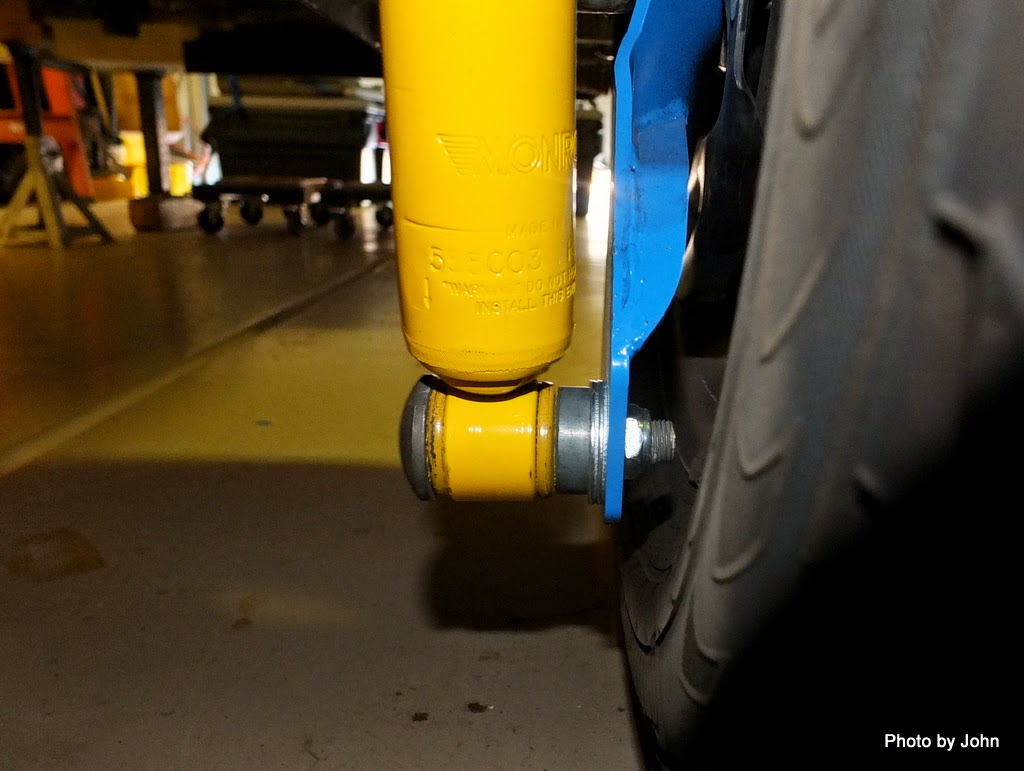 I added two washers along with Monroe's supplied spacer on the lower mount shoulder bolt. 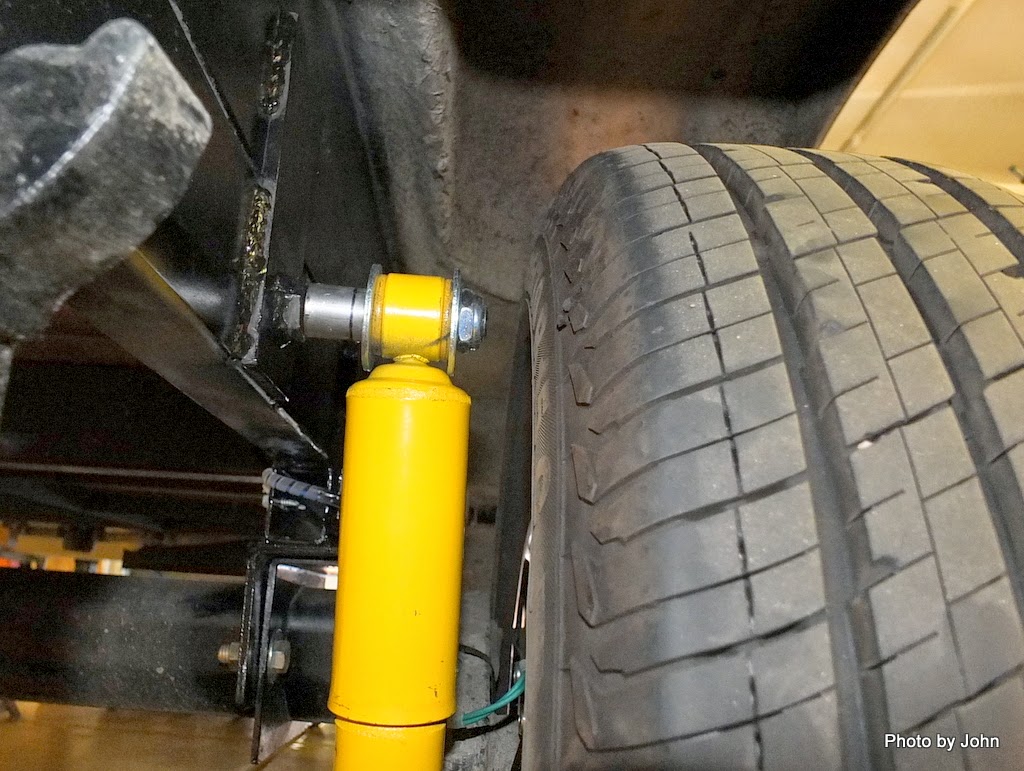 There's over 1/2 inch clearance on the upper mount as well. There's more clearance on the left hand installation since Scamp didn't center the axle between the frame rails. It's actually offset to the left by about 1/4 inch.

Done! Two inch lift, Nev-R-Adjust brakes, and a semi-custom shock installation. A big thanks to Jim at Orbital Machine Works for the "what-if" correspondence and the willingness to sell individual components from their Casita kit.

I'm expecting big improvements but haven't taken it out for a long test drive yet. There's a river calling me...


I got an e-mail from Jim at Orbital Machine Works after he looked at this post noting I'd installed the lower mounts on opposite sides from their intent. The gussets on the lower mount should be nearly vertical rather than nearly horizontal. Switching plates from side to side didn't change the location of the lower shock attach bolt but DID resolve the slight clearance problem I'd had and got the gussets oriented to oppose the shock stress as designed. Big thanks to Jim for his helpful response!

Posted by Just Finding Our Way at 8:26 AM