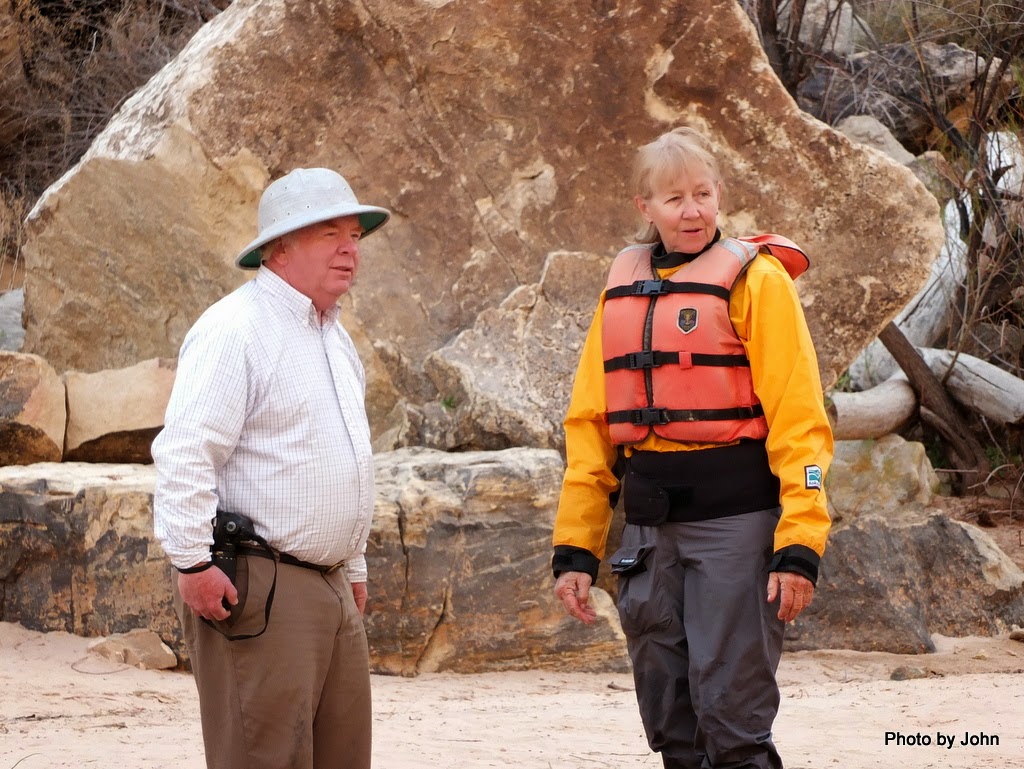 Individuals chose different types of clothing. Some rigged for a possible flip and dressed for a possible swim while others went with other styles. Dave Mortenson was the trip coordinator while Helen was the individual who had the permit. We started the trip with a full group of 16 people. 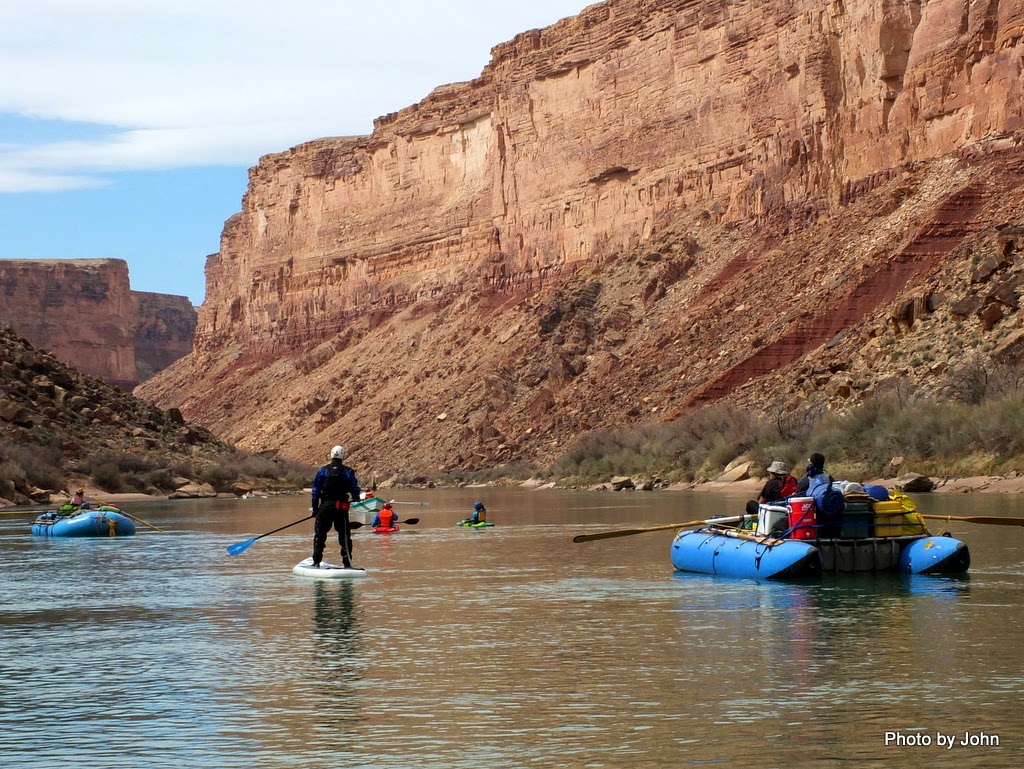 We were finally on the water at 10:45 on March 6 with a full schedule planned. Twelve miles plus filming at two different rapids. Stef paddled his Stand-Up Board for much of the trip. 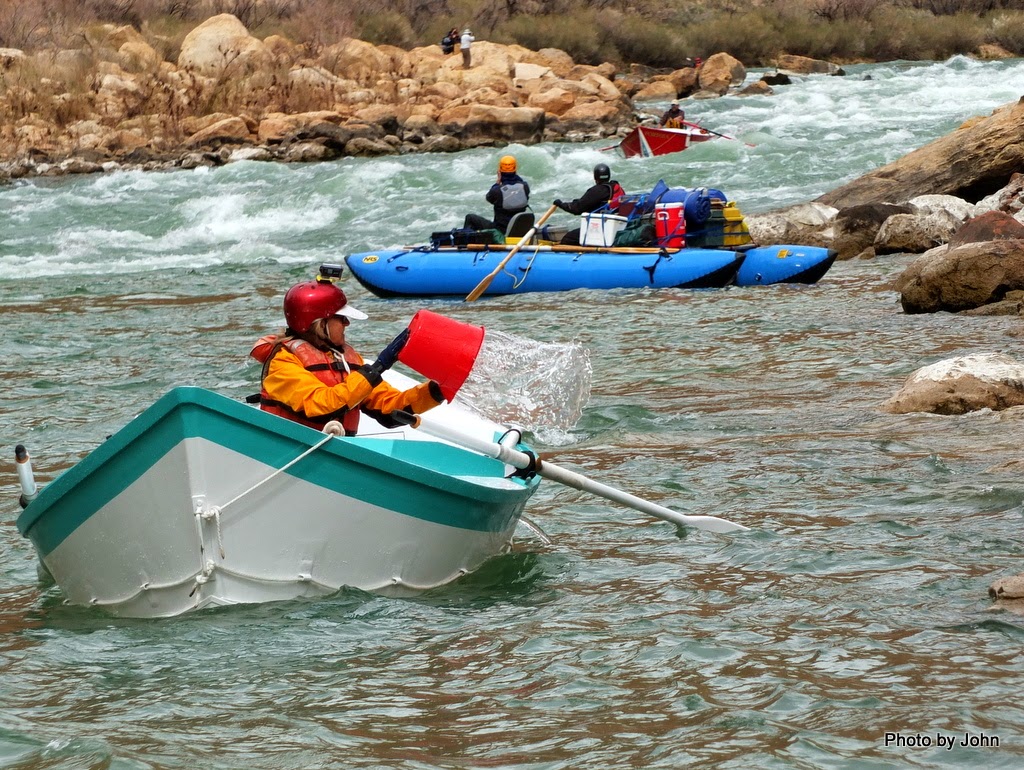 Soap Creek was an easy run for everyone except our kayaker who swam the lower portion of the run. Here Helen is bailing out the Susie Too while Tony (rowing) and Shy on the cataraft watch Greg's run in the Portola from the river left eddy. 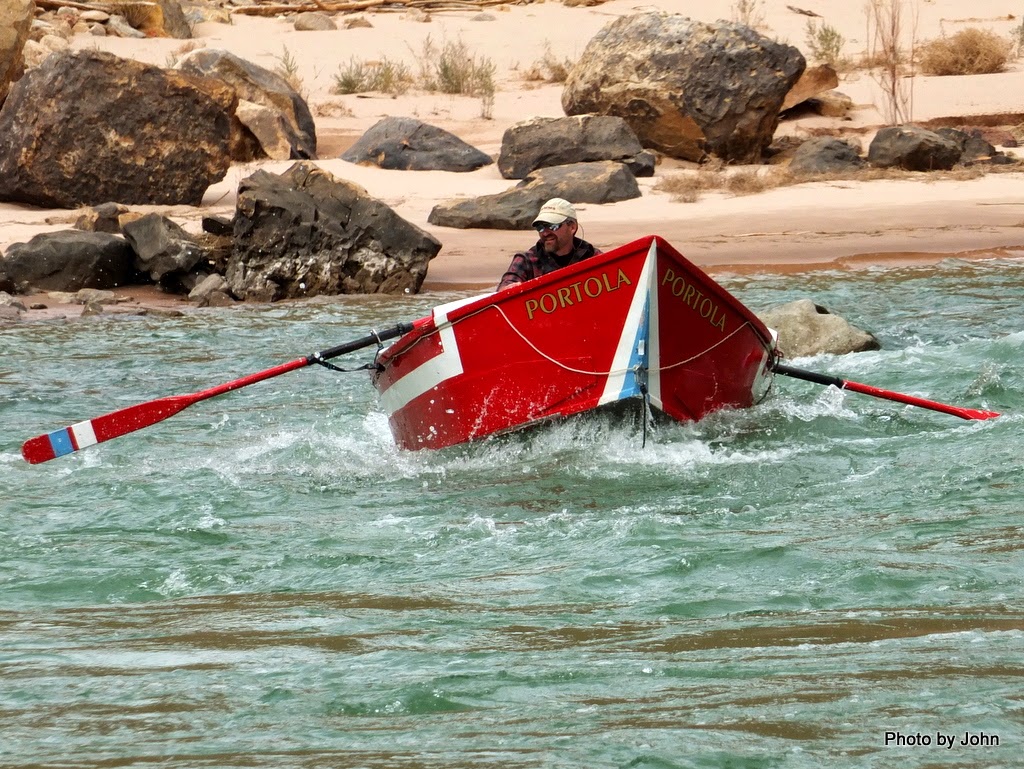 Greg rides out the tail waves in the Portola wearing his trademark Pendleton shirt. 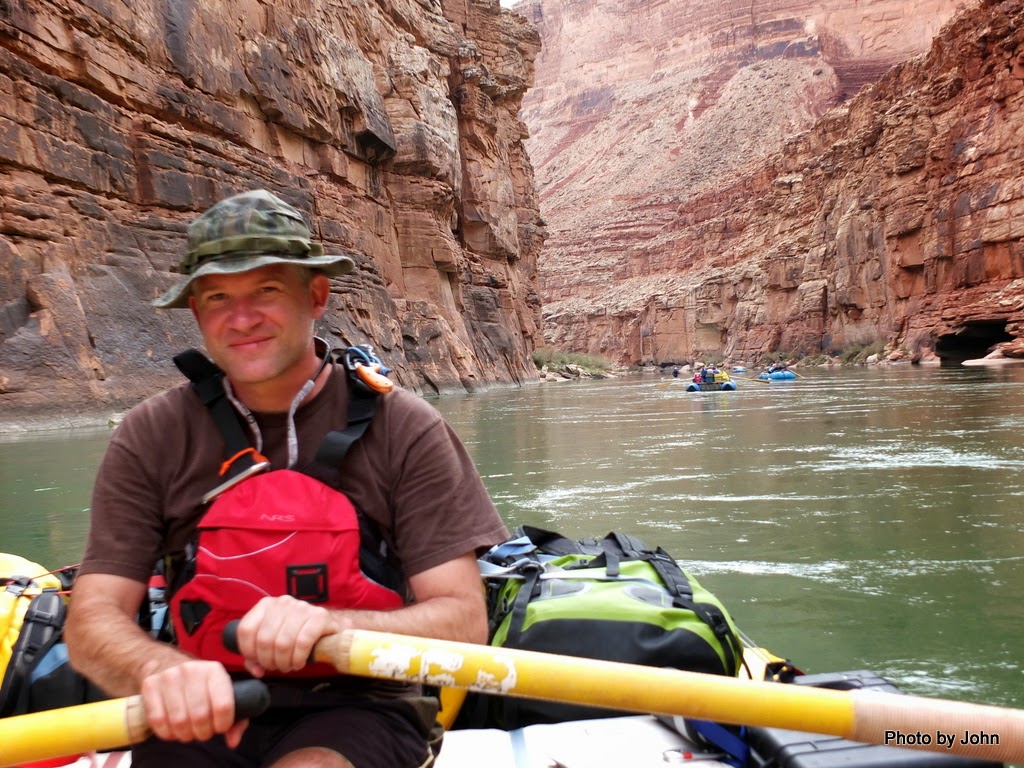 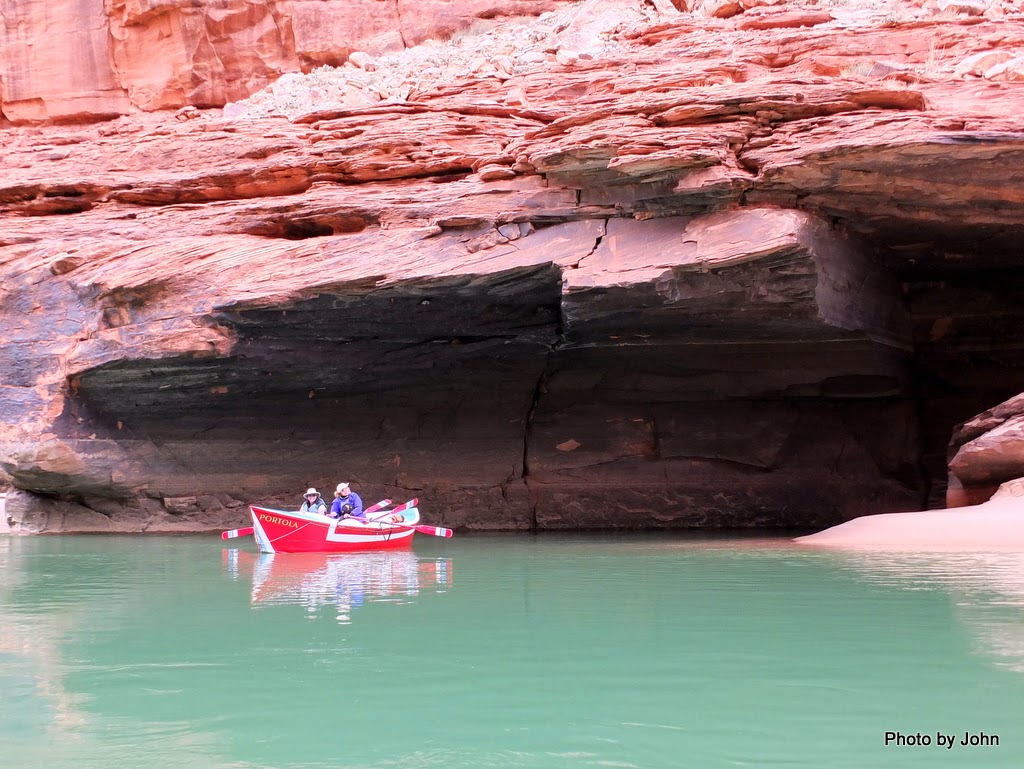 while Izzy took a turn at rowing the Portola. The guy (to be unnamed) wearing a Pendleton shirt was shockingly seen to be rowing a rubber raft through this section. 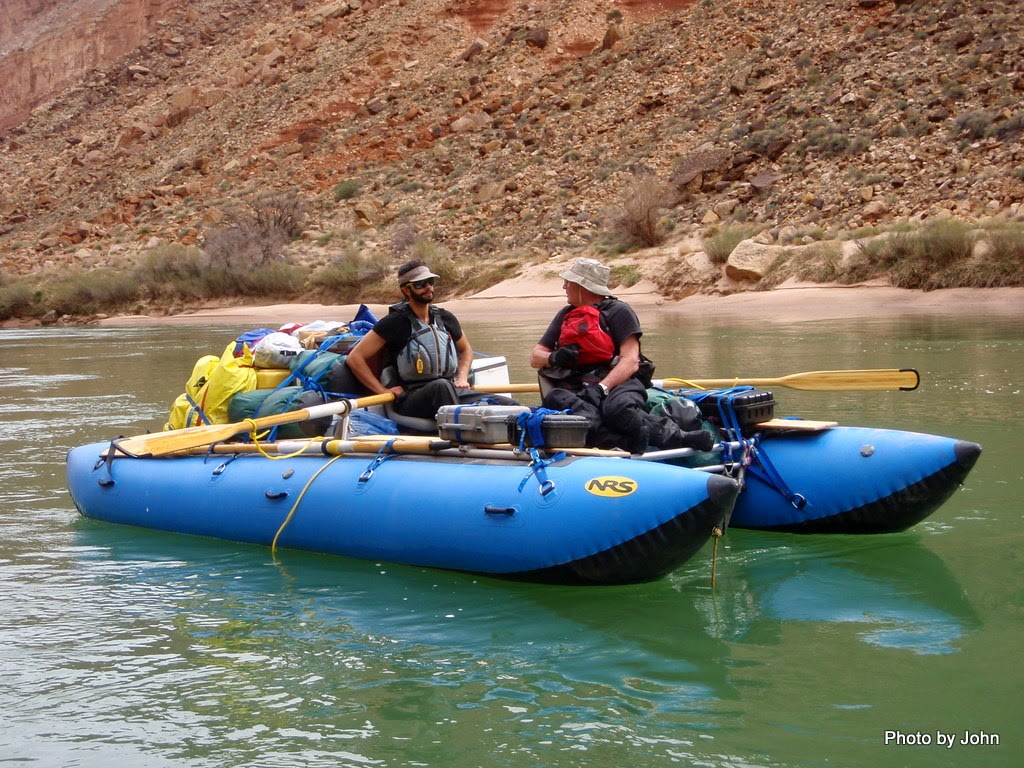 Shy rowed the cataraft while Tony enjoyed the view from the "suicide" seat for part of the day. 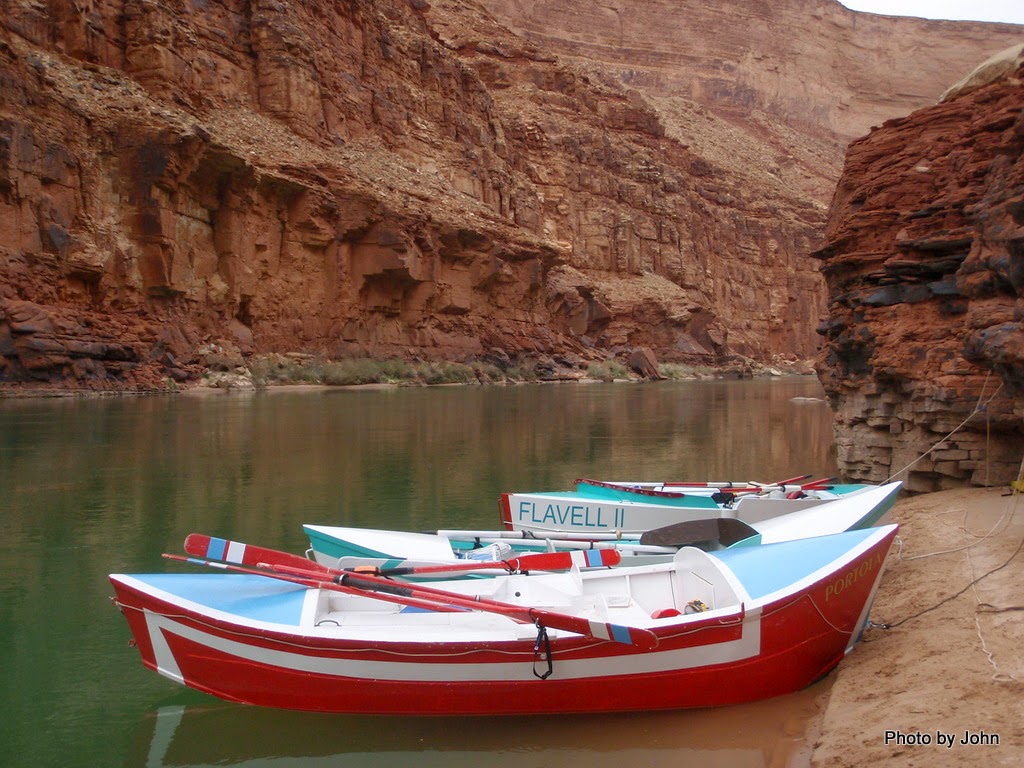 We all pulled over just above House Rock Rapid to scout it. As usual, the dories would group together so that they didn't get beat up by the rafts rubbing against them. 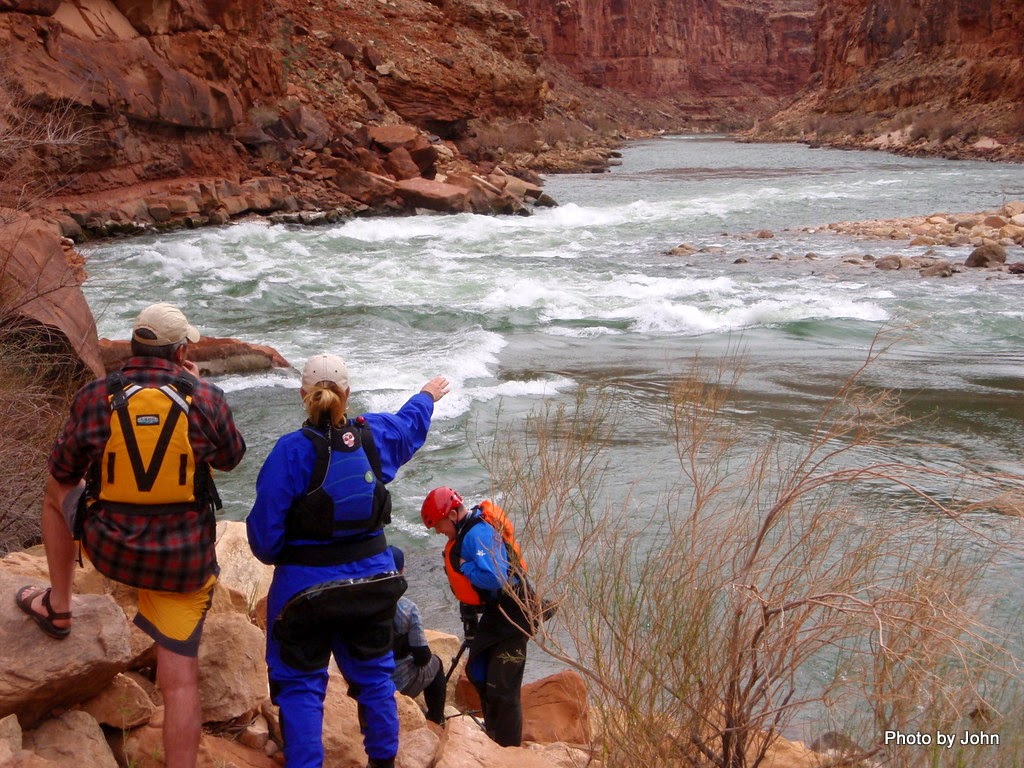 House Rock was our first class 7 rapid. The current pushes you to the left wall where there are two large holes waiting to eat your boat if you stray from your line. Here, Greg and Izzy discuss the preferred line. We ran first so that Izzy could take pictures of the boats coming through.

Helen had a scary looking ride at House Rock but everyone came through right side up. After House Rock we had another 3 miles to go, arriving at Upper North Canyon by 5:30. Dinner was over by 8:30 and the lanterns went off about 9 pm when the dish washing crew finished their chores. Through the Roaring Twenties tomorrow.