While I was working with PVC pipe for the awning frames, I decided to build a sign for our site at the Quartzsite Gathering in early February.  Last year there were 80 fiberglass trailers there.  A sign would make it a lot easier for internet friends to find us. 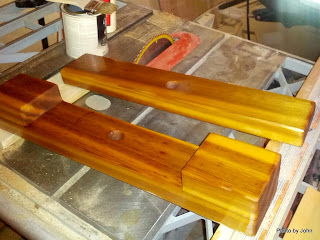 The base was  made from pieces of Western Red Cedar 2x4 that happened to be close to the saw.  A couple coats of spar varnish will slow down damage from moisture, just in case it happens to rain in the desert. 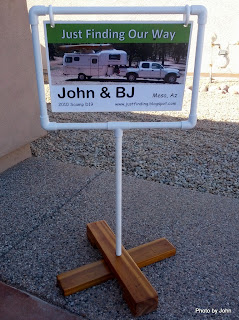 The frame was designed so that the fittings were glued to the horizontal pieces while the verticals were sanded so that they would slip together easily. The sign was printed on ledger-sized paper, laminated, and then glued to coroplast backing, making a reasonably weatherproof sign.  Shower curtain rings complete the ensemble. 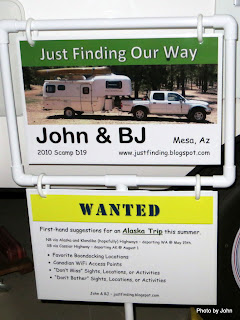 After I made the sign, I realized that it could actually display two signs.  The second one is asking for personal experience and recommendations for the Alaska trip planned for next summer.
Posted by Just Finding Our Way at 7:10 AM