Cleaning Up Behind People

I was delighted to have our daughter ask if we could go kayak/canoe camping on one of the local lakes for an overnight. Looks like the Green River trip rubbed off. Now she wanted to introduce a friend to this mode of camping. 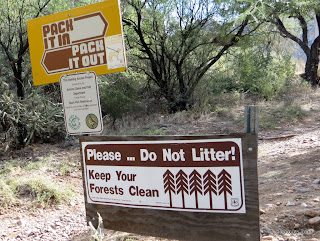 We decided to camp at "Beer Can Point" on Canyon Lake since it is only about 2 1/2 miles from the place where you can launch hand launched boats, making it an easy first trip. As we approached the point, we observed a boat loading and leaving the dock.

This sign is the first thing you see when you land. 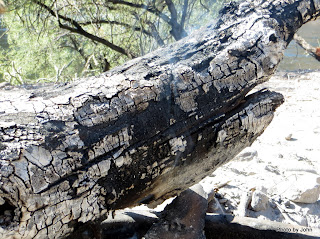 Apparently the people that just left couldn't read.  Beer bottles in the fire pit, Pepsi cans scattered about with the bees have a party. Not only did they leave their trash, but they also left a log smoldering as well. In addition to the trash in camp, there were several bags of trash stacked in the men's toilet and others on the sidewalk outside. Seems if you could carry your trash to the restroom you could just as easily carry it to your boat! Rumor has it that the Forest Service no longer services the restrooms but they still charge the access fee. 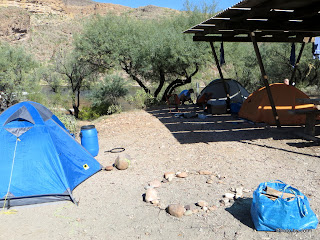 We got camp set up, taking advantage of the shade shelter to provide some protection. 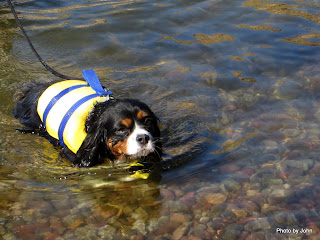 Turk came with us this time and was a well behaved camper. He was the only one who intended to go swimming! 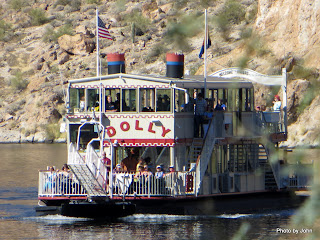 The Dolly "steamship" tour paid us a visit twice - once during the afternoon on their two hour cruise and again in the evening with their four hour dinner cruise. Quite a few boats out cruising as well as water skiers and some fishing but we had the camp area to ourselves. 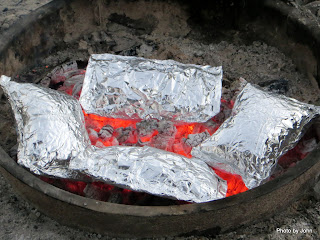 Dinner was veggie & beef packets on mesquite coals. The seams were done well enough that the packages plumped up nicely. 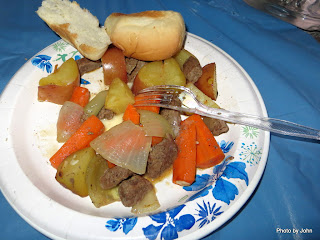 Twenty-five minutes later dinner was ready. The paper plates were good kindling to get the rest of the mesquite we'd hauled in burning for fresh coals for s'mores. 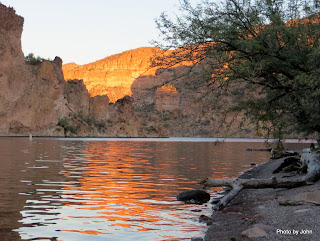 The weather was wonderful - up to mid 85's during the day, mid 50's at night. The morning sun was lighting up the canyon walls before people were stirring. 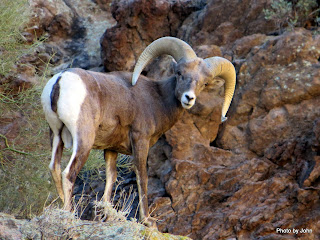 On the way back we spotted a Desert Bighorn Sheep about 20' from us as we turned a corner. He was nice enough to stand there and let us take pictures as we drifted past. 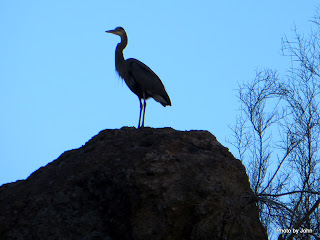 The Great Blue Heron were out looking for breakfast as well.

We hauled out five bags of other people's trash leaving the site much cleaner than when we started.  Too bad people don't clean up behind themselves!

Posted by Just Finding Our Way at 3:22 PM