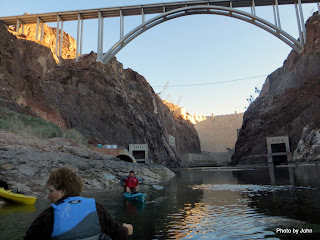 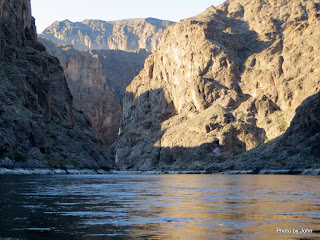 With the early launch, the river was still in the shadows. Lake Mohave's level was several feet below full pool, and with the morning releases from the dam, current was fairly swift in the shallows of first section. 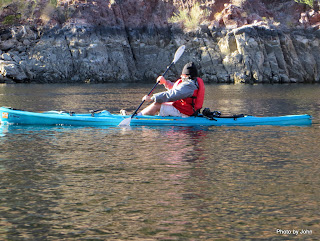 Willie paddled his "new" Scupper Pro Classic. The boat is nearly 20 years old but in great shape. It doesn't look like it had been used very much. 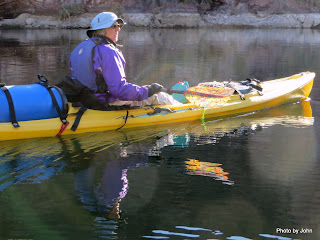 BJ paddled her "loaner" Scupper Pro because it was faster to drop the barrel in the tank well than to pack a hatch for a quicker launch. 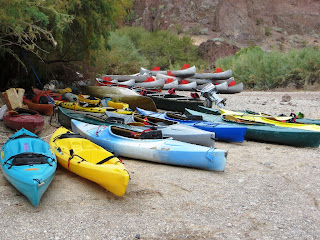 We knew it was going to be a very busy holiday weekend with several Boy Scout troops known to be launching. We weren't surprised to get to Arizona Hot Spring below Ringbolt Rapid and find one troop already in camp and others arriving during the day. 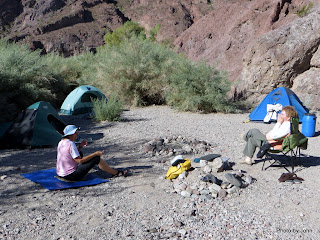 We were grateful to find a group of four breaking camp, leaving our favorite spot available. It didn't take long to set up camp, staking our claim for the weekend. Later in the afternoon, a group of students and staff from University of California at Santa Barbara (UCSB) arrived after paddling eight miles upstream and set up camp just up-canyon from our spot. 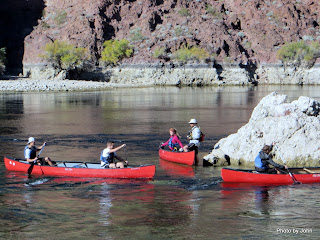 The next morning, the UCSB group had their canoes lined up along the shore and were paying rapt attention to the leader as he explained the techniques needed to safety cross eddy lines and to ferry across the current. After a bit of practice, their goal for the day was to paddle upstream, almost to the dam, and visit the upstream hot springs. Their plan was to return after dark so that the students also got some experience paddling at night. 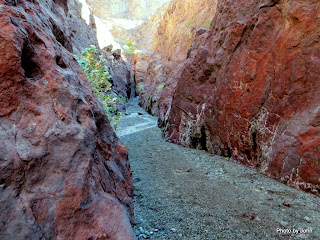 While the UCSB group was paddling upstream, we elected to take a walk up the slot canyon to Arizona Hot Spring. The route to the hot spring from the beach is not long, but it does involve scrambling over several small "waterfalls" - at least they would be if the canyon flashed. 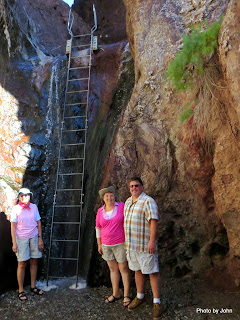 The route does involve one ladder, complete with water splashing down. It's really not wise to think you'll stay dry on the walk to the springs.

The pools are created by damming the slot with sand bags which occasionally get washed out. This time there were three separate pools. In the past, it has always been configured as two chained pools, the upper pouring directly into the lower. Because of the spacing between the pools, the temperatures in the middle and lower pools were cooler than normal.

As planned, the UCSB group returned after dark and quietly stacked their canoes and made their way to their camp. Unfortunately, their example of quiet didn't rub off on some of the Boy Scout troops, especially the group with the leader who thought shouting louder was more effective communication! 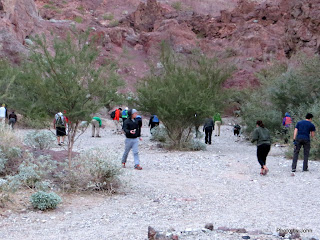 Early Tuesday morning the UCSB group broke camp quietly, but the most impressive part was when the whole group came back after loading their canoes and carefully checked the area where they had camped, demonstrating Leave No Trace principles. To say that we were impressed with the students and their leader is an understatement, and yes, I did send a communication to their Vice-Chancellor for Student Affairs sharing how impressed I was. 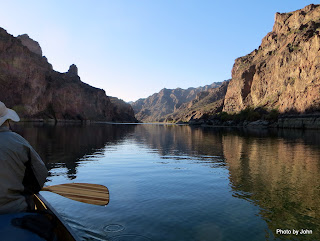 All trips have to end.  This one ended with a quiet paddle for the eight remaining miles to Willow Beach, Arizona.  I'm hoping I get to do it again this winter, perhaps in the middle of the week with fewer people in camp.
Posted by Just Finding Our Way at 8:07 PM