I've become a very happy fan of the Millenicom 4G MiFi that we've been using for several months now. While it was intended for use while we travel, it's now our default Internet access at home as well. 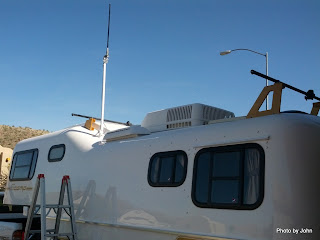 For the trailer, I wanted an external antenna feeding a Wilson Sleek amplifier, but the antenna needed to clear our garage opening and not require running a feed wire through an open window screen. I seriously considered a temporary style mount on the back bumper, but couldn't find a weatherproof coax fitting for the feed-through so I went a different direction. 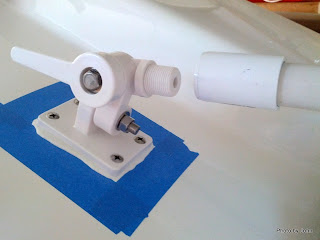 The mount I elected to use is a Shakespeare 4186U Nylon Rachet Mount from Amazon, designed for marine use. It's also available in a chrome plated model and a stainless model, but the nylon version was the most affordable and looked like it would fit our needs. I fabricated a 42" extension from 1" Schedule 40 PVC.  It was 42" because that was the length of the piece I had. 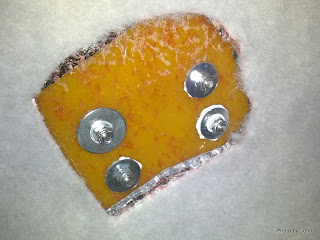 The mount was positioned over the cabinet above the closet to provide an easy run to the amplifier. It was positioned on the slope to take advantage of the refrigerator vent when the antenna is in the stowed position. The mount is attached with stainless bolts, large area washers, and nyloc nuts. The insulation and "rat fur" goes back in place when the installation is finished. 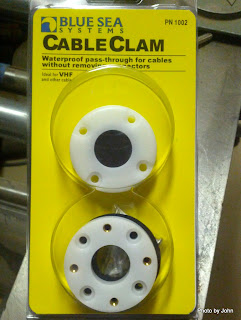 I wanted to use a bulkhead seal suggested by a very experienced RVer but it was made in Italy and both US distributors were out of stock. Ended up using the Blue Sea CableClam which is just as functional but a bit more bulky. It was another Amazon purchase. These are available in various sizes - I used a 7/8" version but could have used a 5/8" version based on the diameter of the connector on the antenna. 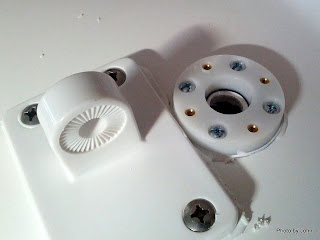 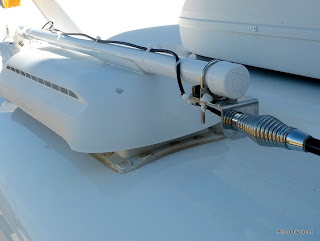 The Maximum Signal "Super Trucker Antenna" came with a stainless mount, U bolt, and hardware so that it could be clamped to the top of the extension. In the travel position, the extension "snaps" into a saddle fabricated from a short piece of 1.25" PVC pipe that was cut so that slightly more than 1/2 of it is used. 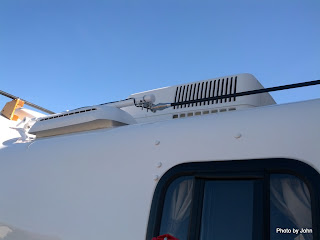 I think it makes a pretty clean installation in the stowed position, and doesn't impact garage clearance. It does require a ladder to access the mount to move it to the vertical position, but I carry the ladder for stowing the canoe anyway. We typically only haul one canoe which is loaded on the curb side of the trailer, so the antenna location won't be an issue with the canoe.


With just over a month until retirement, we're getting ready but won't have an operational report for a while.
Posted by Just Finding Our Way at 2:40 PM